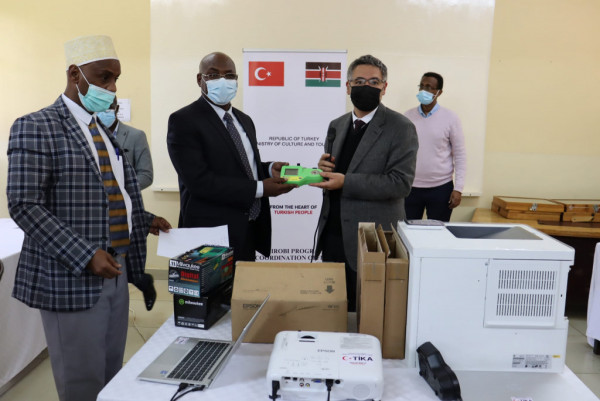 The equipment delivery ceremony held at the National Beekeeping Institute of Kenya was attended by Eyüp Yavuz Ümütlü, TİKA’s Nairobi Coordinator; Harry Kimtai, Principal Secretary for Livestock at the Ministry of Agriculture, Livestock and Fisheries of Kenya; Fille Elmi Bishar, Director of Livestock Production; Jumia Morale, Director of Beekeeping; and the Principal and administrators of the Institute.

The equipment provided by TİKA, including a nitrogen generator for the analysis of antibiotic residues in honey, devices measuring water and sugar content in honey, and laptop computers, printers, and projectors to be used for training and reporting purposes, was delivered to Harry Kimtai, Principal Secretary for Livestock, at the delivery ceremony of the project implemented as part of the Beekeeping Program, launched by TİKA.

The Institute, which was unable to measure and report the amount of antibiotic residue in honey due to lack of equipment, now has access to the infrastructure needed to test honey by measuring and reporting different parameters, using the equipment provided.

In his speech at the ceremony, Eyüp Yavuz Ümütlü, TİKA’s Nairobi Coordinator, stated that Turkey is the second-largest honey manufacturer, after China, and has significant knowledge of and experience in beekeeping. Ümütlü noted that they wanted to share Turkey’s experience with their Kenyan counterparts. He added that with the project, they made a significant contribution to honey production, which is a strategic field for Kenya; supported honey sales and the production of honey under healthier conditions; and paved the way for Kenyan honey to enter the East Africa market.

Jumia Morale, Director of Beekeeping, delivered a speech at the ceremony and stated that TİKA was the first international organization to directly support the Institute, after the Canadian experts who played a role in the establishment of the Institute left the Institute in the 1980s. He remarked that the support provided by TİKA was extremely important and meaningful for them.

Harry Kimtai, Principal Secretary for Livestock, stressed that the project provided great benefits to the Institute, which was unable to measure and report the amount of antibiotic residue in honey due to lack of equipment but now has access to the infrastructure and equipment needed to measure and report other parameters, as well. In his speech, Kimtai stated that Turkey was a major country in the beekeeping industry and was using the most advanced technology. He thanked TİKA and said that they hoped projects in this field would continue.

African players in Europe: 100-goal Mane punishes Palace again
8 mins ago  Sport
WHO recommends alcohol tax hike in Europe to fight cancer
21 mins ago  World
LASEMA rescues 4, as truck falls on car in Ojuelegba
44 mins ago  Nigeria
Myanmar's Suu Kyi has 'no comment' on call for war against junta
50 mins ago  World
Pele 'punching the air' and getting 'better every day'
1 hour ago  Sport

Groups urge Buhari to confirm Dikio’s appointment
11 hours ago  Nigeria
Brown Skin Girl… And The Laurels Continue For Wizkid, Others
2 days ago  Music
New law to make Nigerians pay more for electricity underway
1 day ago  Nigeria
Watch: Wizkid And Wale Perform "Ojuelegba" Together On Stage
15 Sep  Music
Do You Know About The Spirituality Of Foods?
1 day ago  Guardian Life