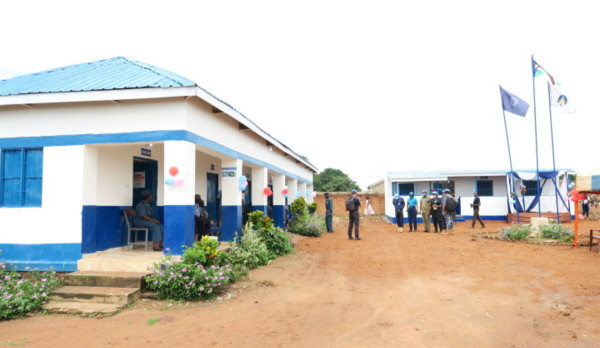 “When conflict broke out, the area became completely deserted. People fled for fear of their lives, leaving behind their homes and belongings,” reveals Sam Muhumure, the Head of the United Nations Mission in South Sudan’s Field Office in Wau.

With the signing of a peace deal in 2018, relative stability has returned and UNMISS has worked tirelessly with local partners to create secure living conditions for residents here.

“It’s been a long process of working with traditional and community leaders to build confidence and encourage people to return to their homes,” continues Mr. Muhumure. “We’ve done clean-up campaigns, ensured regular patrolling by our peacekeepers and, most recently, have fully refurbished the police station here to make sure that law enforcement officers have all the facilities required to protect and serve citizens.”

Residents of Awiel Jedid are hopeful that the new facility will lead to greater security and a decrease in criminal activities.

“We have suffered a lot from crimes, robberies, random shootings at night and even rape,” reveals Tina Paul, a citizen who attended the handover ceremony. “With this police station, our police officers will have more capacity to ensure that everybody living here can be at peace and follow the law.”

Speaking at the handover, Sarah Cleto Hassan, Governor of Western Bahr El Ghazal, urged local police to take advantage of the new facility and improve upon their service delivery. Furthermore, she emphasized the need for citizens themselves to ensure that they abide by the laws of the land.

“Peace is hard to maintain and UNMISS has helped us a lot by revamping this police station,” averred Governor Cleto. “It is now incumbent upon local police officers to make the best use of the station, ensure that law and order is maintained and citizens of Awiel Jedid can lead peaceful, prosperous lives. Equally important is that all residents themselves make sure they do not break the law and live together in harmony.”

For his part, Mr. Muhumure stressed upon the need for more women police officers and increased numbers of police stations in rural areas across Wau.

The refurbishment of the police station was actioned under the UNMISS Quick Impact Projects (QIPs) programme that focuses on small-scale infrastructure improvements to address urgent public needs. The project was implemented by Community Agency for Development Organization (CARDO).