By APO Group
“The knowledge that you have given to my officers during this workshop will have a positive impact on our prison service for generations to come,” said Major General Yohannes Orac, Director of the Bentiu Central Prison, while closing a workshop to improve prisoner record management in the National Prison Service of South Sudan. “Knowledge isn’t… 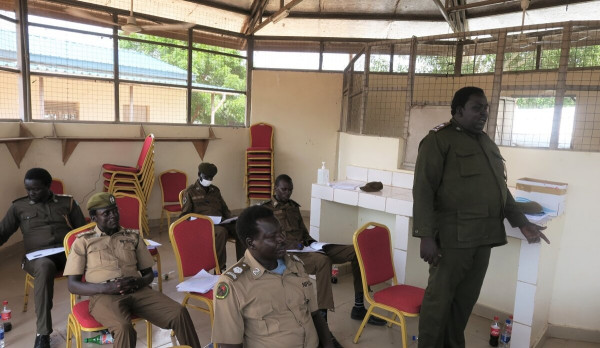 “The knowledge that you have given to my officers during this workshop will have a positive impact on our prison service for generations to come,” said Major General Yohannes Orac, Director of the Bentiu Central Prison, while closing a workshop to improve prisoner record management in the National Prison Service of South Sudan.

“Knowledge isn’t like money which vanishes the moment it enters your hands; it grows exponentially as we trickle it down and this training in managing accurate records for prisoners is something that will contribute to overall development in Unity state,” he added.

Major-General Orac was referring to a two-day training organized by the United Nations Mission in South Sudan’s (UNMISS) Corrections Unit as a proactive response by the UN Peacekeeping mission to build capacities and bridge a major gap in the state’s prison service.

“We visit the prison every day and identified a big gap in the way records were handled and kept,” explained Alfred Moses Codjoe, the UNMISS Corrections Advisory Leader in Bentiu. “It is important to keep accurate and accessible records of people who are under custody because these records are needed during court proceedings,” he added.

Prison records management includes pertinent information about inmates, ranging from details of their offences to their health conditions, visitors received, court appearances, and their release from incarceration.

“We have to manage some 20 registers and it was not easy for us to handle them. Now we know how to differentiate our registers as well as differentiate between necessary information in each register,” stated William Hakim Deng, a Prison Officer participating in the workshop. “Our work will become much easier now,” he emphasized.

Another participant, Lieutenant-Colonel William Nyuon, says he believes that the training will also help them treat inmates more humanely and in line with accepted human rights standards.

“These sessions have taught us about improving general prison management; how to deal with inmates, take care of their health and property; and to help them become better citizens as they complete their sentences,” he averred. “It will also help us put a check on accusations of corruption,” he added.

Accurate prison records are, of course, vital, but their safety, confidentiality, and accessibility for future reference also cannot be underestimated.

The UNMISS Corrections Unit responded to these needs as well by handing over office furniture and equipment.

This training is a continuation of the mission’s ongoing efforts to revamp and build capacity in the corrections sector, thereby contributing to upholding the rule of law across Unity State.

“With funds allocated for Quick Impact Projects, UNMISS has also provided two big dormitories for inmates in the Bentiu Central Prison,” stated Mr. Codjoe. “Detention conditions have improved, and it will get better if separate sections for juveniles and women are also provided.”

World
Fugitive businessman close to Venezuela's Maduro extradited to US
16 mins ago
A fugitive businessman accused of acting as a money launderer for Venezuelan President Nicolas Maduro's regime was extradited Saturday
Nigeria
State Congress: APC adopts consensus option in Sokoto
29 mins ago
The All Progressives Congress (APC) in Sokoto State on Saturday adopted consensus option to elect the 36 state executives of the party.
Saturday Magazine
Interest, passion key to success of KenMoore Fashion, says founder O.K. Chukwuma
31 mins ago
Ogbonna Kelvin Chukwuma, the founder and CEO of one of Nigeria’s foremost fashion brands, KenMoore Fashion, has attributed the success story of KenMoore Fashion to how he painstakingly built the business with the interest he had on what he was doing, and the passion to succeed. "At a tender age, during my apprenticeship in the…
Nigeria
El-Rufai tasks APC officials on excellent leadership in Kaduna State
35 mins ago
Kaduna State’s Gov. Nasir El-Rufa’i on Saturday tasked newly-inaugurated state officials of the All People’s Congress (APC)
World
Grand Mosque in Mecca drops social distancing
1 hour ago
The Grand Mosque in the Muslim holy city of Mecca in Saudi Arabia operated at full capacity Sunday, with worshippers praying shoulder-to-shoulder