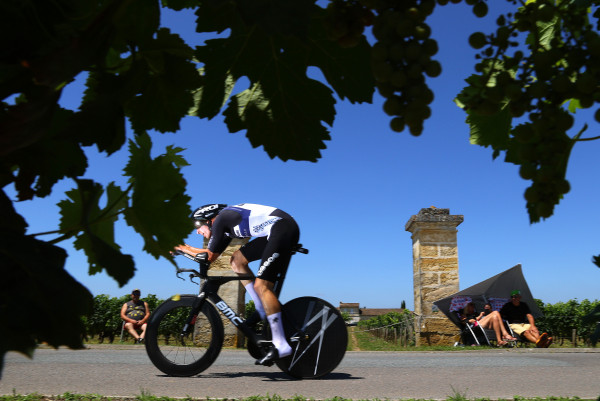 Max Walscheid once again delivered another strong individual time trial performance as he finished 17th on the penultimate stage of the Tour de France, which was won by Wout van Aert (Jumbo-Visma).

Walscheid followed up his excellent performances at the Giro d'Italia with another strong ride over the 30.8km course, that saw him briefly in the 'hot seat” after posting a time of 37'54″ before being usurped by Mikkel Bjerg (UAE).

Sergio Henao battled his way to the finish line still suffering from an arm injury suffered during a crash in the Pyrenees and slipped one position in the overall classification to 21st.

While the likes of Simon Clarke, Carlos Barbero and Sean Bennett all finished their races ahead of the ceremonial final stage that finishes in Paris on Mandela Day.

It was nice to finally be in the “hot seat” at the Tour. That was my goal going into the ride, to have the best time when I rolled over the finish line and I achieved that so I am happy.

Now for Paris, which I'm really looking forward to. To ride on the Champs-Élysées on Mandela Day is going to be very special.

The last three days have not been the best for me, crashing twice. Yesterday was difficult for me with the arm being very, very painful today and will also likely be tomorrow (on the cobbles in Paris). Let's hope I have a good night and finish well tomorrow as the Tour comes to an end.

It's been frustrating as I had been feeling really good, the legs were good and I felt like I could have an impact in the final parts of the stages but the crash meant it was very tough to handle the bike and so I'm just focused on trying to finish the Tour on Sunday, on Mandela Day.

Tokyo Olympic Games: Okagbare, Nwokocha advance to 100m semi-finals
1 hour ago  Sport
No going back on APC congresses, Buni vows despite court verdict
3 hours ago  Nigeria
Nigeria’s revenue to GDP is abysmal, says Akabueze
3 hours ago  Nigeria
Why there is persistent, acrimonous demand for restructuring, by Adele Jinadu
3 hours ago  Politics
Airlines fault revalidation of operating certificates every two years
3 hours ago  Business