Witnesses to the wonders the Lord is working

By APO Group
Share on Facebook Share on Twitter Share on WhatsApp Share on Telegram
About 50 participants from all over the world met in Frascati at the John XXIII Centre to listen, dialogue and discern from the Synodal Syntheses produced from the consultation of the People of God. Adopting the method of spiritual conversation, during the twelve days of work, the "experts" wrote the Document for the Continental Stage.… 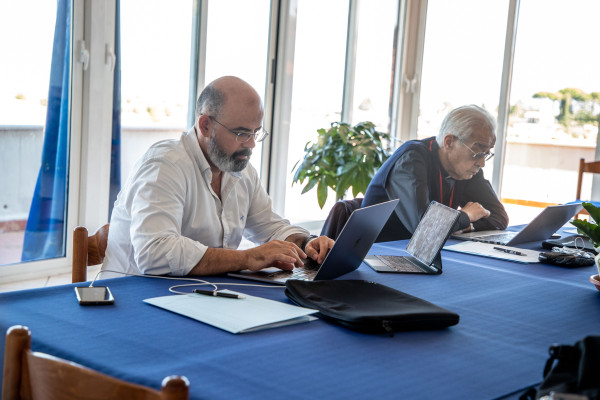 About 50 participants from all over the world met in Frascati at the John XXIII Centre to listen, dialogue and discern from the Synodal Syntheses produced from the consultation of the People of God. Adopting the method of spiritual conversation, during the twelve days of work, the “experts” wrote the Document for the Continental Stage. At the end of the meeting, Pope Francis met the participants in private audience.

“We come to you, at the end of a unique and extraordinary ecclesial experience that has made us aware of the richness of the fruits that the Spirit is awakening in the Holy People of God. We truly feel a sense of awe at the wonders God is working in his Church! … After sitting for so many days, in order to better realise a prolonged and patient listening to the voices of the People of God, returning to walk together with our brothers and sisters is a joy multiplied. We will be, each in the portion of the People of God with whom we walk, witnesses of the wonders that the Lord is working. We will be able to say that the Church offers itself as a home for all, because the experience of synodality that we are living leads us to “widen the space of the tent” (cf. Is 54:2) to truly welcome everyone”.

These were the words of Cardinal Mario Grech, Secretary General of the Synod, greeting Pope Francis during the private audience that the Holy Father granted to the participants on the afternoon of Sunday 2 October. The meeting with the Pope, held in an atmosphere of great fraternity, took place at the end of the twelve days of work during which the group of 'experts' drafted the document that will be offered to the discernment of the People of God for the second stage of the 2021-2023 synodal process.

At the heart of the work were the 112 syntheses of the Bishops' Conferences (out of 114), but also those of the Eastern Catholic Churches, Religious Congregations, Ecclesial Associations and Movements, the Vatican Dicasteries and individual contributions that reached the General Secretariat of the Synod. An unprecedented response from the local Churches!

In Frascati, the participants tried to carry out a community discernment through the method of spiritual conversation as experienced by numerous groups in the first stage of the synod process. Through times of listening and dialogue, plenary meetings or in working groups according to geographic affiliation, ecclesial status or gender, the participants first identified those generative tensions, as they emerged in the Syntheses, and then came to the actual drafting of the Document, with a first and then a second draft, cross-readings, discussions and corrections. Special attention Particular attention was given to the spiritual preparation of the participants and to the liturgy with the celebration of daily Mass and various moments of prayer to open and accompany the process. Coordinated by Father Giacomo Costa S.J., member of the Coordination Committee of the Synod Secretariat, the meeting was jointly chaired by Cardinal Mario Grech and Cardinal Jean-Claude Hollerich, General Reporter of the 16th Ordinary General Assembly of the Synod of Bishops.

This drafting group, composed of men and women, whether bishops, priests, religious or lay people, was joined on 30 September by members of the XV Ordinary Council of the Synod of Bishops. The discernment carried out, both in terms of the large number of participants and the method adopted, is a unicum for the General Secretariat of the Synod.

The Document for the Continental Stage, produced simultaneously in Italian and English, was approved by the Council and delivered to the Holy Father. It will be made public in mid-October and sent simultaneously to all the bishops as an act of restitution to the people of God.

Distributed by APO Group on behalf of General Secretariat for Synod of Bishops. Sport
Australia reach World Cup last 16 and send Denmark home
3 mins ago
Australia reached the last 16 of the World Cup for only the second time in their history with a 1-0 win over a disappointing Denmark on Wednesday.
Nigeria
Senate passes FCT N607.9bn 2022 Appropriation Bill
14 mins ago
The Senate on Wednesday, passed the Federal Capital Territory (FCT) N607.9 billion 2022 Appropriation Bill. This followed the adoption of the harmonised report of the Senate and House of Representatives Committee
World
Angola's Isabel dos Santos says victim of 'political persecution'
16 mins ago
Angolan tycoon Isabel dos Santos says she is the victim of "political persecution" engineered by President Joao Lourenco, her father's successor at the helm of the oil-rich southern African country.
World
Spain seizes 5.6 tonnes of cocaine
19 mins ago
Spanish authorities said Wednesday they had seized 5.6 tonnes of cocaine worth over 340 million euros in the port of Valencia, the nation's biggest haul of the drug in four years.
Sport
Five-sub rule means 'higher quality football' in Qatar, says FIFA expert
26 mins ago
Former AC Milan and Japan coach Alberto Zaccheroni said on Wednesday the implementation of the five-substitute rule has "changed the game", leading to higher-quality matches at the World Cup.

Sport
Australia reach World Cup last 16 and send Denmark home
3 mins ago
Australia reached the last 16 of the World Cup for only the second time in their history with a 1-0 win over a disappointing Denmark on Wednesday.

World
Bird flu kills almost 14,000 pelicans, seabirds in Peru
32 mins ago
The highly contagious H5N1 avian flu virus has killed thousands of pelicans, blue-footed boobies and other seabirds in Peru, according to the National Forestry and Wildlife Service (SERFOR).