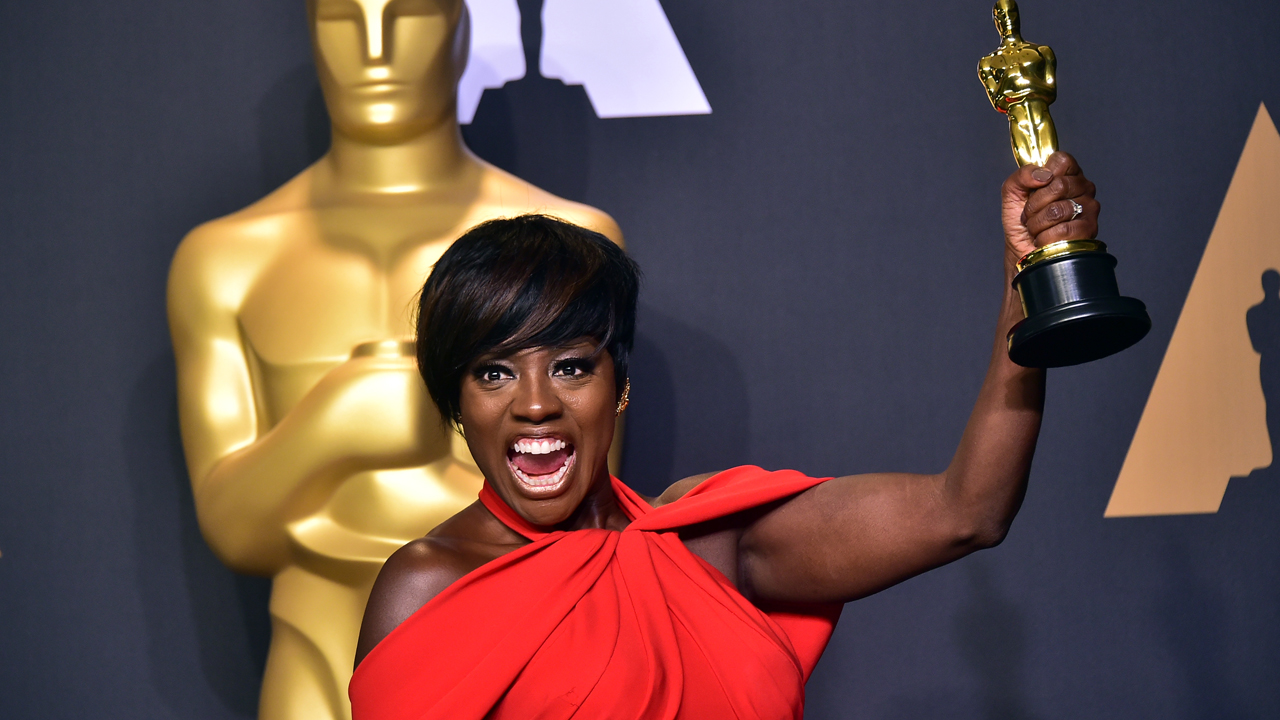 Actress Viola Davis poses with the Oscar for Best Actress in a Supporting Role in the press room, during the 89th Oscars on February 26, 2017, in Hollywood, California. / AFP PHOTO / FREDERIC J. BROWN 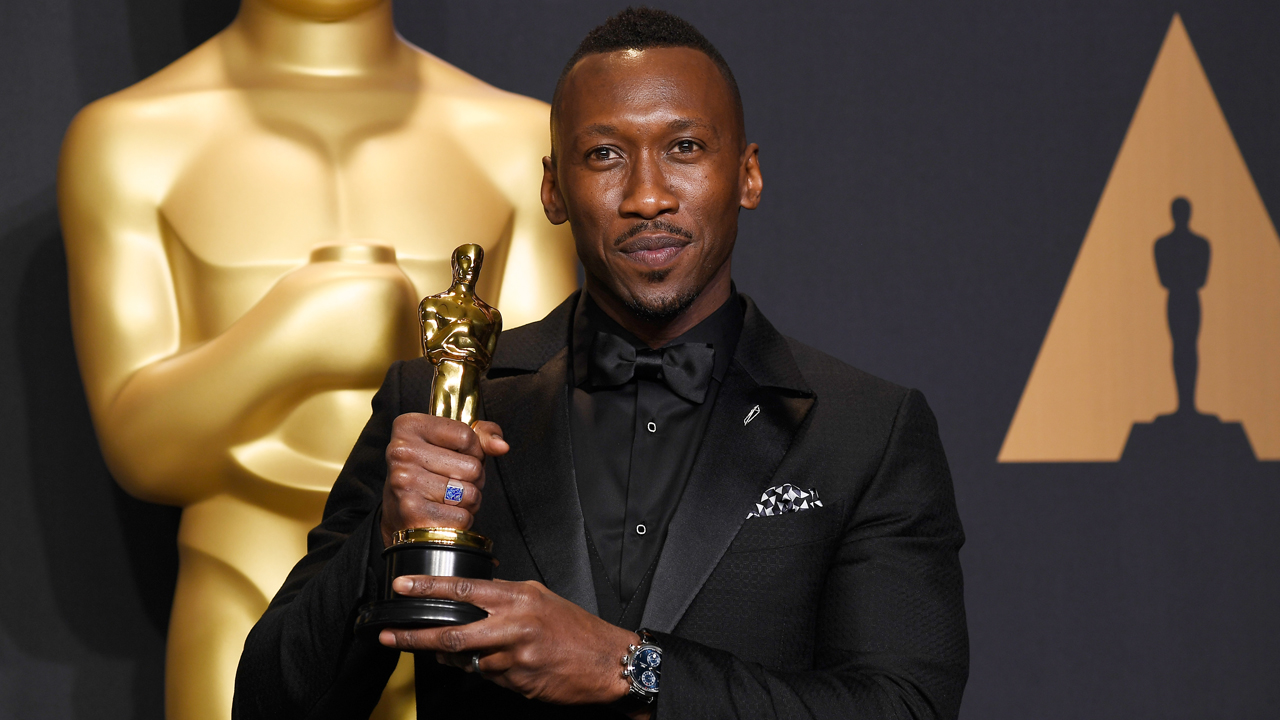 Two black film stars took the early acting honours at the 89th Oscars on Sunday, which began with a salvo of jokes by host Jimmy Kimmel targeting US President Donald Trump.

Mahershala Ali won the best-supporting-actor prize for his turn as a drug dealer with a heart in coming of age drama “Moonlight” while Viola Davis took the supporting actress statuette for her work in the family drama “Fences.”

Justin Timberlake opened the gala night — expected to be dominated by musical “La La Land” — with some upbeat music, and Kimmel then wasted no time putting the A-list audience in a political state of mind.

“This broadcast is being watched live by millions of Americans and around the world in more than 225 countries that now hate us,” joked the 49-year-old Kimmel.

The late-night comedian quipped that Trump, who pulled off a political upset win with his campaign that targeted immigration, had taken the heat off Hollywood and its annual gala.

“I want to say thank you to President Trump. Remember last year when it seemed like the Oscars were racist? That’s gone, thanks to him,” Kimmel said.

This year’s nominees have reflected a push by the Academy to reward diversity after the #OscarsSoWhite controversy of the past two years that prompted calls for a boycott of the annual bash.

Ali was a first-time nominee along with “Moonlight” co-star Naomie Harris, while Davis and her co-star Denzel Washington are both old hands, with 11 nominations between them and — including Davis’s triumph — three wins.

Music
DJ Neptune… This Life Of Greatness
6 hours ago
Within Nigeria’s crop of disc jockeys, Patrick Imohiosen is the gentlest one can ever meet. “Would you like something to drink,” he asked, calmly offering this reporter a seat. Across his tee shirt and baseball cap, the inscription ‘Greatness’ lay boldly.

What's New
Alec Baldwin Admits Career Might Be Over After Fatal 'Rust' Shooting
1 day ago
Actor Alec Baldwin has revealed that his acting career might be over following the fatal shooting that led to the death of cinematographer Halyna Hutchins on the set of his film Rust. Baldwin made this revelation in an interview with George Stephanopoulos of ABC News, adding that he did not care.  In the interview, Baldwin…

Film
Five Exciting Facts About Hit Spanish Hit Series "Money Heist"
1 day ago
In anticipation of the final five episodes of Netflix's hit series Money Heist, here are five facts about the show you might not have given a second thought.  Money Heist tells the story of a group of criminals who try to pull off the biggest heist in recorded history, to print billions of euros in the Royal Mint…

Music
Little Mix Formally Announces 'Break' After A Decade-long Career
1 day ago
British girl band Little Mix has confirmed they'll be taking a break at the end of their upcoming tour to pursue solo projects after a decade long career.    The trio Leigh-Anne Pinnock, Perrie Edwards and Jade Thirlwall took to social media to announce their break in a heartfelt post.   A message on their official…

Music
For Nigerian-Canadian Singer, Tome, The Wait Is Over
2 days ago
With global dancefloors being ignited by the scintillating log-drums of Amapiano, Nigerian-Canadian superstar, Tome, has joined the league of singers decorating their discographies with the groovy rhythm. With her new song dubbed, Wait, set to drop tomorrow, the ember soirees are set to be enchanted with more African rhythms. For Tome, who has had quite an interesting…

Music
All You Need To Know About Fast Rising Afro-Hybrid Star, Luddy Dave
3 days ago
We had a sit down with up and fast rising star Luddy Dave who about to drop his debut EP on the 3rd of December is titled H.E.R (Her Ecstatic Royalty). We also chatted about his journey into the music industry and what to expect moving forward from him.  How did you come about the…

Music
Aro-z Makes His Debut With BMT (Big Money Talk)
3 days ago
Nigerian singer and songwriter Razaq Olanrewaju Jimoh going by the stage name Aro-z has made his music debut with the single BMT (Big Money Talk). On the New single BMT, he talks about the luxury life and how money influences things. The Lagos-raised singer whose love for music started at a young age began honing…

Music
Adekunle Gold Announces New Album ‘Catch Me If You Can’ In Swahili
3 days ago
Nigerian singer, Adekunle Gold, has announced that he will be dropping his new album next year. The ‘AG Baby’ hitmaker in an announcement posted on his official social media pages said the new album titled ‘Catch Me If You Can’ will be made available on February 4, 2022. This will be the fourth studio album…

Music
New republic Barbados names Rihanna national hero
4 days ago
As Barbados became the world's newest republic, its prime minister's first act was to officially declare the island's most famous citizen, Rihanna, a national hero. Barbados had already conferred the title of ambassador extraordinary and plenipotentiary on the billionaire multiple Grammy-winning singer and businesswoman in 2018 and tasked her with encouraging education and tourism. The…

Film
Netflix Hit Series 'Money Heist' Reaches End
2 days ago
Streaming giant Netflix will release the final five episodes of its Spanish hit series Money Heist on Friday. Created by Spain's private Antena 3 network, the thriller about a gang of thieves and their elaborate heists fast became Netflix's most-watched series not in English after the platform picked up the show in December 2017. The robber characters…

Film
Watch: A Naija Christmas Trailer Out Now
2 days ago
Christmas time in Nigeria is a joy to experience, with not to be missed festive events dotting everyone’s calendar. This year Netflix and Kunle Afolayan will give Nigerians even more to enjoy! Following the announcement of Netflix’s first Nigerian Christmas film – A Naija Christmas; produced and directed by Kunle Afolayan, the global streaming giant…

Film
Netflix & Chill This December: New Movies To Look Out For
3 days ago
Get in on the Festive Cheer! December  is packed with titles that will have you enjoying the festivities with so much movie options to binge on, from  A Naija Christmas, the story of a mother's Christmas wish and the grand prize that comes with it which sets off a fierce competition between her sons, to…

Film
House of ZETA Releases Stories By Her - A Short Film To Kickstart 16-Days Of Activism For The Elimination Of Violence Against Women
4 days ago
Globally, one in four girls experiences sexual abuse. This situation gets dire as 27% of women between the ages of 15 - 49 have been abused by their partners worldwide, and about 736 million have experienced violence in their life.

What's New
Marvel Superhero Series 'WandaVision' Casts Spell On MTV Awards
17 May
Marvel superhero series "WandaVision" was the big winner at the MTV Movie and TV Awards on Sunday, as Sacha Baron Cohen poked fun at his recent Oscars loss, with a little help from Borat, Bruno, and the gang. "WandaVision," which takes characters from Marvel's record-breaking superhero blockbuster films and shifts the action to the Disney+…

What's New
Oscars Delayed By A Month As Pandemic Rules Extended
28 May
The Oscars have been postponed for a second consecutive year, and relaxed eligibility rules allowing films to skip film theaters will be kept in place due to the pandemic, the Academy said Thursday. The 94th Academy Awards will now take place on March 27, 2022, exactly a month later than originally planned, and are set…

Guardian Life
Is Constructive Criticism A Thing In Nollywood?
13 Jun
The Nigerian film industry Nollywood is Africa’s most prevalent film industry. It has survived on quantity rather than quality, and this has affected its global competition. Apart from the infrastructural and financial barriers that hinder the industry from self-improving, there is a worrying habit of a backlash from film producers when criticisms of their films…