Since the declaration of Ile Ife as a tourism zone by the Ooni of Ife, Oba Adeyeye Enitan Ogunwusi Ojaja 11, the ancient town has continued to host different cultural and tourism related activities, with the Ooni playing host to tourists and dignitaries from different parts of the world.

The latest was a youth forum organised by the Ooni in conjunction with Motherland Beckons, of which he is the grand patron and Enuwa Palace. Tagged Democracy Day Musical Fiesta, the event, which held on May 29, was staged in celebration of Nigeria’s fledgling democracy, at the Amphitheatre of the Obafemi Awolowo University (OAU), Ile Ife.

It was some sort of ‘town meeting gown’ event with a large number of youths from across the country interacting with the students and the university community under a convivial and celebratory environment, as the Amphitheatre, venue of the event, was all glitz and pomp. Artistes from Atunda Entertainment, Tenstrings Music Institute and Olamide Badoo, who was the star entertainer for the night, headlined the event that lasted into the early hours of the following day.

Before the musical performances, pep talk by different personalities were delivered on the occasion to draw the attention of the youths to their role in the society and the need for them to embrace useful schemes and empower themselves for the task of nation building as the future of the country rest on their shoulders. 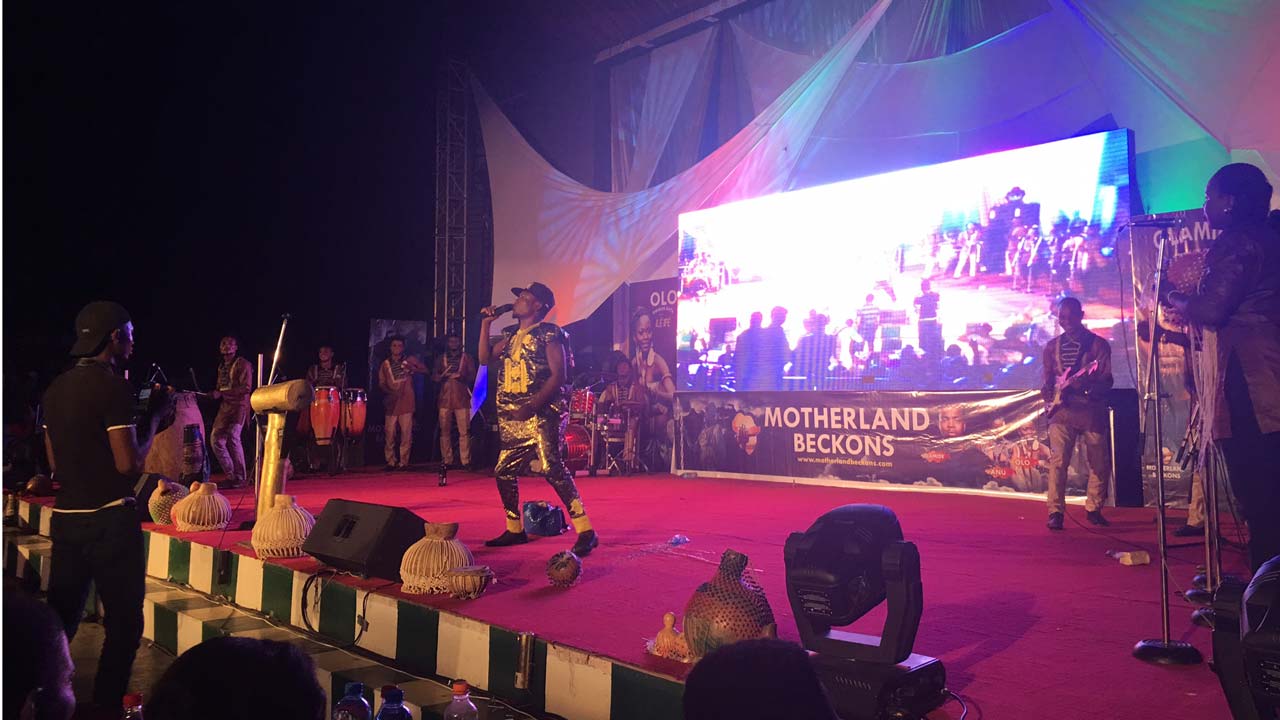 A performance scene from the event 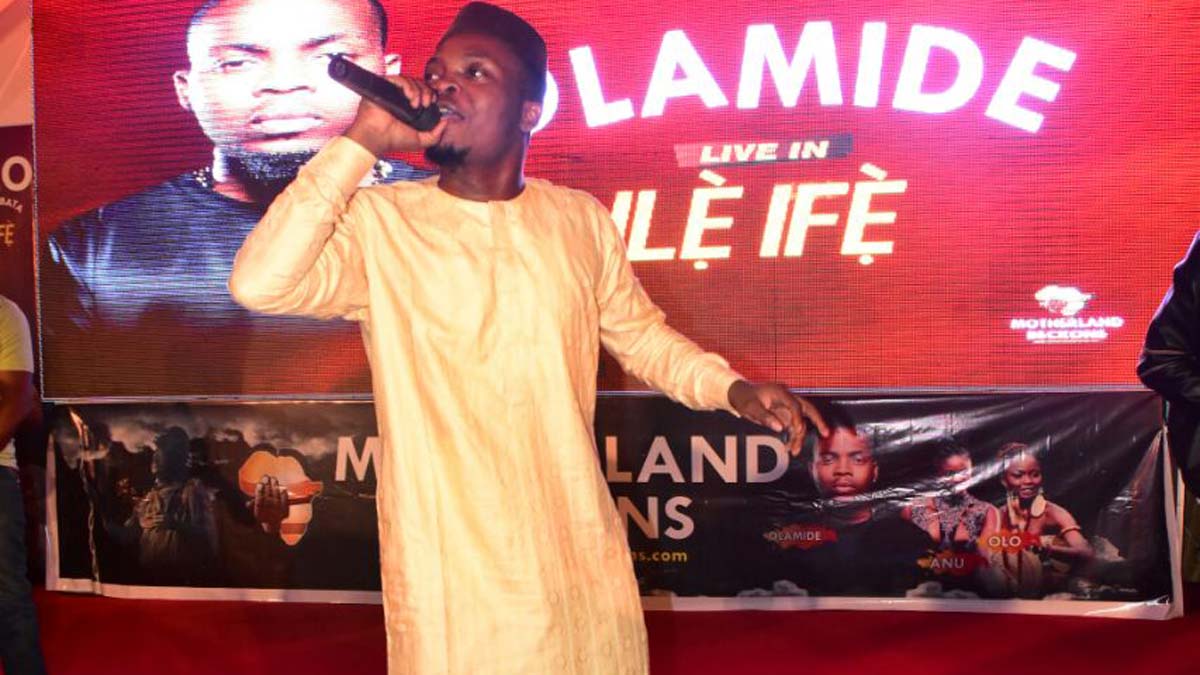 Olamide performing at the event 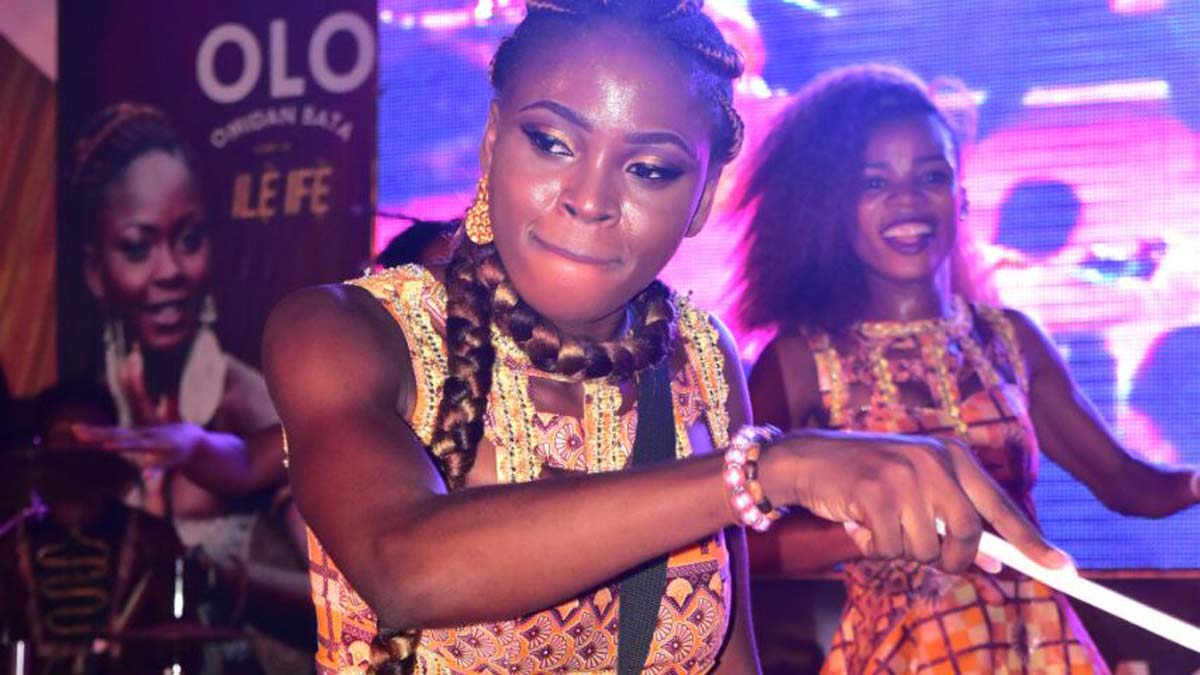 Founder of Motherland Beckons, Otunba Wanle Akinboboye, who is also the President of La Campagne Tropicana Beach Resort and consultant to the Ooni, admonished the youths to adopt positive outlook and shun all forms of criminalities but rather devote themselves to acquiring skills and education that would make them better persons and contributors to the national wealth.

Akinboboye promised the teeming youths that his organization, in conjunction with the Oonirisa and the Enuwa Palace, would leave no stone unturned in their bid to positively engage the youths of Ile Ife and the entire Yoruba land in the area of musical, cultural and sports tourism with the sole objective of turning Ile Ife (the land of expansion and the cradle of mankind and civilisation) into the foremost tourist destination in Nigeria and in Africa.

Some of the musical acts that enthralled the audience included Adigun Olohon Iyo, the rising star from the stable of Atunda Entertainment. His velvet-voice and stage craft got the audience singing and dancing as he rendered a soulful blend of contemporary juju rhythm, laced with rap composed in rich Yoruba idioms, proverbs and innuendos.

Another starlet from Atunda Entertainment that electrified the night with her spectacular and breathtaking performance was Olo Omidan Bata, the first Nigerian female bata drummer, who got a standing ovation from the crowd, as she entertained them with her mastery of baba drumming, singing ability, embellished with her well-choreographed dancing skills and acrobatic displays.

Backed by her 15-man dance ensemble and complemented by a symphony of Iya Ilu (big drum), Gangan (talking drums) and heavy percussions, Anu Lady Ekwe, who is also the first acclaimed Nigerian female Ekwe maestro, whipped the joyous crowd into frenzy with a stunning performance.

The night’s offerings climaxed with a box office performance by Olamide Badoo, who was virtually swooped on by the youths. He gave them a lot to celebrate, as he took them through most of his hit songs, stoking their singing and gyrating ferment.

What's New
Michael Jackson's 'Thriller' revolution turns 40
1 day ago
Mixing rock, pop and RnB like never before, Michael Jackson's "Thriller", 40 years old next week, became the most successful album of all time and defined a coming era with its audiovisual ambition.

What's New
Kizz Daniel Makes World Cup Appearance, Performs "Cough" (Odo)
2 days ago
During the FIFA Fan Festival at the Qatar 2022 World Cup, Nigerian music sensation Kizz Daniel gave an outstanding performance. With the current hit song "Cough" (Odo) at his disposal, the singer dazzled an audience of more than 50,000 on Wednesday night. The "Buga" crooner performed live with a live band, and some of the…

Music
Somadina Releases Debut EP “Heart Of The Heavenly Undeniable”
3 days ago
Rising singer-songwriter Somadina releases her debut EP HOTHU, “Heart of the Heavenly Undeniable”. To celebrate the project's release, Somadina reveals the brand-new visual for the single “Y I Want U'' directed by 2brthrs, chopped & screwed by her long-standing collaborator, Chukwuka Nwobi. Backed by a band of Nollywood punk-inspired girls, Somadina is uniting women to…

Music
Why I Chose Plug-In As My Debut Single – TE3JRY
20 Nov
Te3jry, pronounced Teejay, is a versatile musician who grew up in Bayelsa State, Nigeria. He says music has been a significant part of his life and influenced his family. Most of his family members are involved in music directly or indirectly. Over the years, he has made music in Bayelsa state but did not seriously…

Music
Honeydoom … Love Lines From Africa’s Songbird
19 Nov
For some people, the songbird Molly Ama Montgomery, professionally known as Moliy, is a muse for aspiring free-spirited singers, especially with her musical and fashion expressions.

Guardian Life
Appreciating The Historical Aesthetics Of Ile-ife To The Yorùbá Race
22 May
Ifẹ̀ Oòdáyé, Ilẹ̀ òwúrọ̀. Ibi ojúmọ́ rere gbé ń mọ́ wáyé. (Translation) Ifẹ̀ Oòdáyé. The ancient land Where the breaking of the day began Between 1910 and 1912, Leo Viktor Frobenius (1873 –1938), a renowned ethnologist and archaeologist worked on archaeological sites in Nigeria. Ile-ife in Osun State was one of the sites that Frobenius…

On The Cover
Celebrating The Glory Of African Royal Youths
22 May
About 4 years ago when the Royal Majesty, Oba Adeyeye Enitan Ogunwusi (Ojaja II), conceived the idea of creating an award to celebrate the African spirit, he envisioned an Africa where Africans would get the recognition that they deserved. For years, countries outside the shores of the continent celebrated Africans through awards such as the…

Education
Varsities: How indigeneship, ethnicity, others, frustrate appointment of VCs
26 May
The appointment of vice chancellors in Nigerian universities is always full of intrigues. In many cases, the selection process is marred by conflicts of interests and petitions, which often results in legal actions.

Nigeria
Africans urged to foster unity for continent’s growth
26 May
International President of the African Women Lawyers Association (AWLA), Mrs. Amanda Demechi-Asagba, has called for sustenance of unity among nations to foster cooperation and development on the continent.