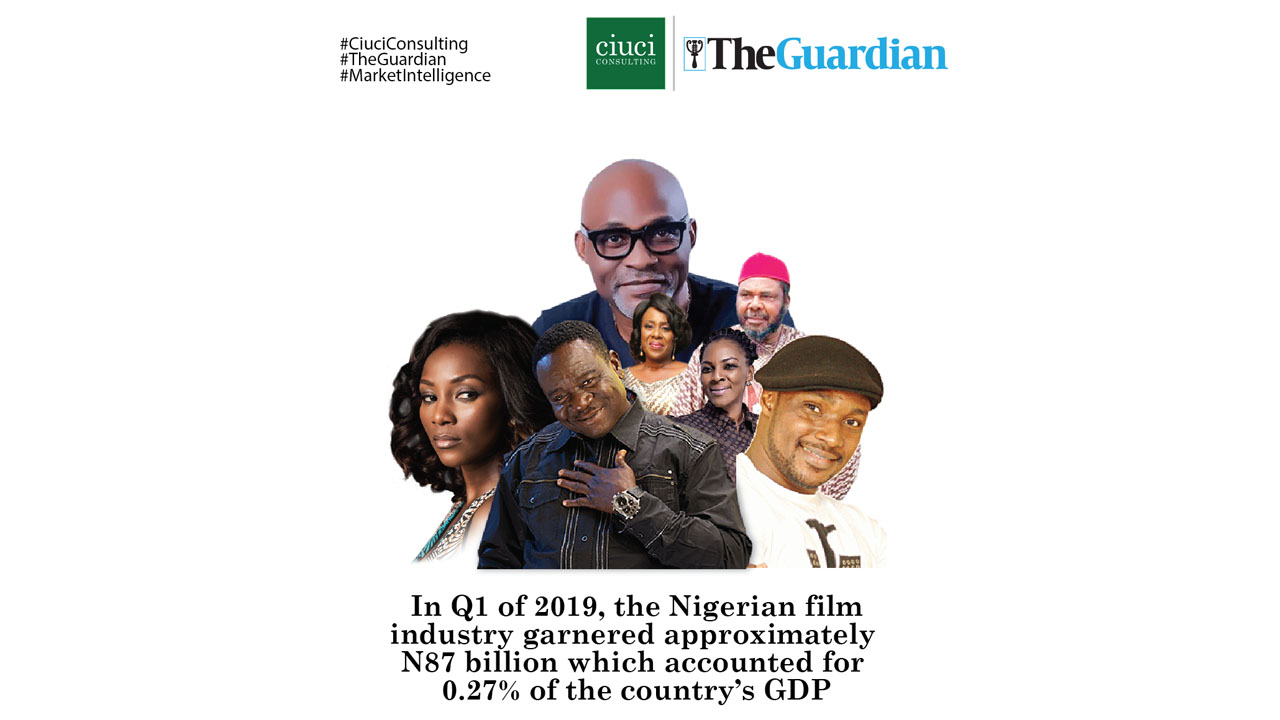 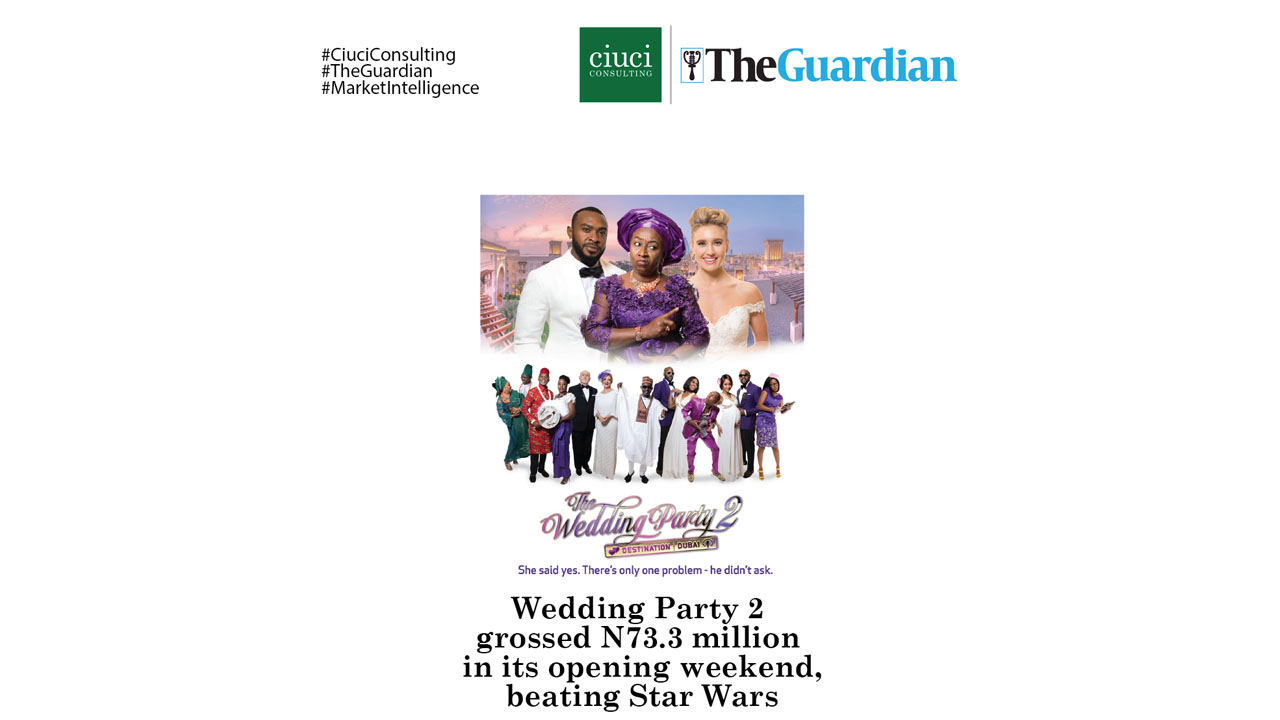 Nollywood 2
The Nigerian film industry, commonly known as Nollywood, is a thriving space that not only provides an avenue for entertainment but also generates a sizeable amount of revenue for the Nigerian economy.

In 2018, the arts, entertainment and recreation industry represented 0.21% of Nigeria’s GDP at a value of nearly N270 billion. In the first quarter of 2019, the industry garnered approximately N87 billion which accounted for 0.27% of the country’s GDP. The Nigerian box office also contributes significant value; in 2017, N4.3 billion was realized and is expected to grow to an estimated N6.4 billion by 2022.

The relevance of the entertainment industry, of which movie production is a subset, cannot be ignored. Notwithstanding its monetary contribution, the industry currently employs over 1 million people, making it one of Nigeria’s largest employers, after agriculture. Its capacity to employ a large number of people has been applauded by the World Bank, acknowledging the job creation potential of Nollywood.

Nollywood was ranked as the world’s second-largest movie industry by volume, behind India’s Bollywood. With a high production capacity, the industry has enabled the spread of movies across Africa as well as to Africans in the diaspora. In 2013, Nollywood produced over 1,800 movies with the cost of producing each movie ranging between N 4.9 and N13.9 million.

The craftsmanship of players in the Nigerian film industry has also received recognition. Actress and producer, Omotola Jalade Ekeinde was acknowledged as one of TIME magazine’s 100 most influential people, alongside other world-renowned personalities like Beyoncé and the former first lady of America, Michelle Obama.

Nigeria’s multilingualism has also added to the industry’s success and contributed to the diversity in film production. Films are acted and produced in different languages, ranging from English, Igbo, Yoruba, Hausa to other indigenous languages. Consequently, the Hausa speaking people of Nigeria also have a thriving film industry known as Kannywood.

Irrespective of the global performance of the industry and revenue generated from movie production in Nigeria, the income earned by the average Nollywood actor/actress is relatively low, ranging from N199,000 to N597,000 per film. Nevertheless, some of the industry’s players continue to thrive, with the recognition and appreciation of Nigerian movies worldwide.

Nollywood actress and producer Genevieve Nnaji recently received global commendation with the production of “Lion Heart” which was bought by Netflix. This is the first Nollywood movie to be acquired by an American movie streaming company and is seen as one of the best things to happen to Nollywood in recent times.

Another notable player is producer and CEO of Ebony Life TV, Mo Abudu. Her TV production company created the romantic comedy-drama “Wedding Party 1 & 2”, which became the highest-grossing title movie of all time in the Nigerian film industry. Wedding Party 2 garnered N73.3 million in its opening weekend – December 15, 2017 – beating Star Wars: The Last Jedi in Nigerian cinemas. By the first week of 2018, it had grossed over N300 million at the box office. The movie was premièred in over 15 African countries as well as the United Kingdom where it recorded the largest single-day opening of N 7.9 million for a film produced in Nollywood. Wedding Party 1& 2 were directed by acclaimed directors Kemi Adetiba and Niyi Akinmola, respectively.

Notably, the Nigerian movie industry is supported by different personalities, who bring cultural diversity, creativity and panache, that have led to its growth and evolution.
The success of movie production worldwide can be partly attributed to the increase in digital platforms. iROKOtv, often referred to as the Netflix of Africa and other popular platforms like ShowMax and Kwese have helped in the distribution and provision of streaming video-on-demand services. iRokotv pays filmmakers approximately N3.6 to 9 million for the exclusive right to stream their movies for a certain period of time. Its role as an effective distribution channel for movies cannot be underestimated as it has a global audience of over 5 million people in 150 countries and a catalogue of over 5,000 Nollywood films.

The increase in the number of movies shown at the cinemas has also increased the industry’s reach. Unfortunately, piracy is a major challenge and reportedly, for every legitimate copy sold in Nigeria, nine get pirated.

It is clear that Nollywood has a positive impact on the Nigerian economy as it generates large revenue and is also a major employer of labour. Its movies have also garnered international recognition thereby creating a formidable presence in the global stage. Although the industry is plagued with limitations such as low-income earning capacity of its actors and piracy of movies, however, the resilience of its players have earned the industry international repute and innovative digital platforms such as iRoko have used the internet to stimulate the growth of the industry by facilitating piracy-free movie distribution. The industry is thriving and is not resting on its laurels. Its success lies in its key players and their innovative capacity.

Culture
An Introduction To Korea’s National Dress: Hanbok
1 day ago
If you are very familiar with Korean culture, then you wouldn’t be a stranger to South Korea’s traditional dress, which is gorgeous on its own with vibrant colours that all connect beautifully together. It is called hanbok in South Korea and Chosŏn-ot in North Korea. The term “hanbok” literally means “Korean clothing.” Traditionally, the basic…

Features
Dog Care: 14 Ways To Groom And Care For A Dog
1 day ago
Making the decision to have a dog is no small feat. This is because you have to care for it as you would a baby. Scientifically, a dog’s brain and mental abilities can be compared to a child’s aged 2 to 2.5 years. Providing a clean environment for your dog to protect it from the…

Wellness
Step Up For Breastfeeding: Educate and Support
1 day ago
The world breastfeeding week celebrated from 1st to 7th of August is a worldwide celebration that occurs yearly in over 120 countries across the globe. World breastfeeding week seeks to underline the positive effects of breastfeeding on both maternal and baby health as well as encouraging, safeguarding and supporting women’s rights to breastfeed anywhere and…

Travel and Places
5 Things To Do When Traveling To Marrakech Morocco
1 day ago
Marrakech in Morocco is a significant economic hub with mosques, palaces, and gardens and a historic imperial city in western Morocco. The Medina is a walled, tightly packed medieval city that dates back to the Berber Empire. Marrakech is a labyrinthine alleyway where bustling souks (marketplaces) provide artisanal jewellery, pottery, and textiles. The Moorish minaret…

Spotlight
From Tiara To Toque: Queen Celestine’s Love For Hospitality
1 day ago
A double queen; Queen Celestine Osem is a one-time Most Beautiful Girl in Nigeria Universe 2014, and represented Nigeria at the Miss Universe- 2014 peagent. Queen ironically wears her crown topped with her culinary prowess. She talks to Guardian Life about her journey with pageantry, her passion for hospitality and the growth of the culinary industry…

Music
Beyoncé Drops ‘Cliquebait’ Teaser Video
3 days ago
Fans of the diva Beyoncé have been anxiously awaiting the music video release for her most recent track, “Break My Soul.” On Thursday night, the 40-year-old performer teased her followers with a “Cliquebait” video. A full video for the song, which is off her most recent album, “Renaissance,” has not yet been made public. In…

Music
Made Kuti Releases New Single 'No More Wars'
3 days ago
Grammy nominee, Made Kuti has made a well-timed return with a new single, "No more wars." "No more wars", released on August 5th 2022, is one of the singles off his forthcoming album. The GMK and Sodi Marciszewer produced single was written and performed by Made Kuti. "No more wars" follows the success of Kuti's…

Film
Kidnapped Actors Cynthia Okereke And Clemson Cornel Released
4 days ago
Nollywood actors Cynthia Okereke and Clemson Cornel have reportedly been released by their kidnappers. The release of both actors was confirmed by the Actors Guild of Nigeria in a statement on its official Instagram page on Wednesday, August 3, 2022. The statement also noted that both actors were unharmed. The statement read, “This is to…

Film
Netflix Ramps Up Investment In African Stories With Large Slate Of Exciting Titles
3 Aug
Netflix today presented a preview of what will be its programming for the end of 2022 and the beginning of 2023.

Film
"Bullet Train" Premiere Brad Pitt Stuns With his Eye-catching Attire
3 Aug
When Brad Pitt appeared at the Los Angeles red carpet for the opening of his eagerly anticipated film Bullet Train, he looked sharp in a striking ensemble. The actor from Once Upon a Time in Hollywood looked sharp with a light lime green coat, roomy jeans, and teal knit top. At the Regency Village Theatre,…

Film
Netflix Files A Lawsuit Against Purported "Bridgerton" Copycats
2 Aug
Following the increased demand for their imitation on TikTok, Netflix Inc. filed a lawsuit against the producers of an allegedly unlicensed musical stage version of its well-known period drama "Bridgerton," accusing them of copyright infringement. Three days after "The Unofficial Bridgerton Musical " sold-out performance" at the city's Kennedy Center, the complaint was made against Abigail…

Film
Madonna Describes Writing Her Story As Cutting Off Limbs
29 Jul
The eagerly awaited biopic Madonna is writing has been the focus of her intense efforts. The procedure hasn't been easy for the Queen of Pop, and it appears that she's having difficulty getting it just perfect. According to reports, Madonna is courting Julia Garner to portray the singer in her self-written and directed musical biography. "I…