Buhari orders Emefiele, other appointees with political ambition to resign

By Dennis Erezi
Share on Facebook Share on Twitter Share on WhatsApp Share on Telegram
President Muhammadu Buhari has ordered all ambassadors, heads of government agencies, departments and parastatals seeking election in 2023 to resign their positions. Buhari gave the order in a circular issued by Boss Mustapha, Secretary to the Government of the Federation (SGF). "The contents of this circular and the incidental directives take effect immediately," Mustapha said…

President Muhammadu Buhari has ordered all ambassadors, heads of government agencies, departments and parastatals seeking election in 2023 to resign their positions.

Buhari gave the order in a circular issued by Boss Mustapha, Secretary to the Government of the Federation (SGF).

“The contents of this circular and the incidental directives take effect immediately,” Mustapha said in the circular. 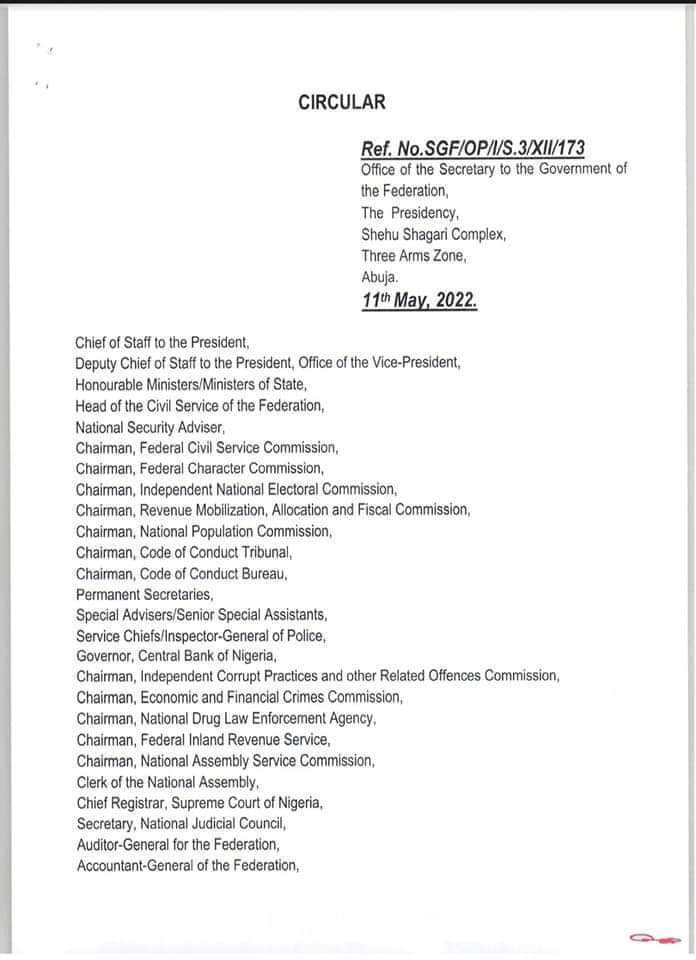 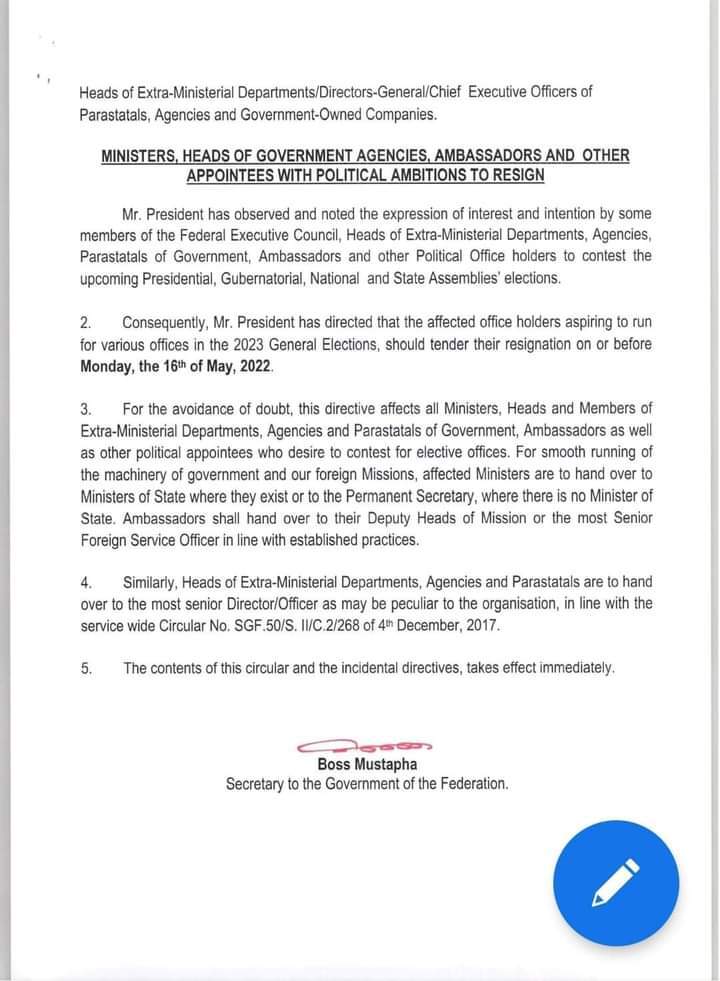 The CBN governor Godwin Emefiele was copied in the circular, which was issued late Wednesday.

“Mr. President has observed and noted the expression of interest and intention by some members of the Federal Executive Council, heads of extra-ministerial departments, agencies, parastatals of government, ambassadors and other political office holders to contest the upcoming presidential, gubernatorial, national and state assemblies’ elections,” Mustapha said.

The president’s directive comes hours after an earlier one directing ministers to resign on or before May 16.

“Consequently, Mr. President has directed that the affected office holders aspiring to run for various offices in the 2023 general election, should tender their resignation on or before Monday, the 16th of May, 2022.

Earlier this week, Emefiele challenged his eligibility to run for the office of Nigeria president continuing as CBN governor in court.

Emefiele’s lawyer, Mike Ozekhome, earlier on Monday, urged the court to issue an interim order stopping the Independent National Electoral Commission (INEC) and the Attorney General of the Federation (AGF) from disqualifying him from participating in the primary election of his preferred political party.

But ruling on the ex parte application, the judge, Ahmed Mohammed, ruled that he would rather order INEC and the AGF to appear to state their side of the case instead of granting the CBN governor’s request.

Mustapha, however, noted that the president’s directive should be complied with by all appointed public office holders, including the CBN governor.

“For the avoidance of doubt, this directive affects all ministers, heads and members of extra-ministerial departments, agencies and parastatals of government, ambassadors, as well as other political appointees who desire to contest for elective offices,” Mustapha said.

He said the order was necessary “for smooth running of the machinery of government and our foreign missions, affected ministers are to hand over to ministers of state where they exist or to the permanent secretary, where there is no minister of state.”

Mustapha said Nigerian ambassadors in different countries are to hand over to their deputy heads of mission or the most senior foreign service officer in line with established practices.

“Similarly, heads of extra-ministerial departments, agencies and parastatals are to hand over to the most senior director/officer as may be peculiar to the organisation, in line with the service wide Circular No. SGF.50/S. Il/C.2/268 of 4th December, 2017,” Mustapha said.

“The contents of this circular and the incidental directives take effect immediately.”

Nigeria
Oyo NDLEA arrests 72 drug suspects
4 mins ago
The National Drug Law Enforcement Agency (NDLEA), Oyo State Command, has arrested 72 suspects for various drug-related offences.
Nigeria
Buhari’s 2023 Budget speech
35 mins ago
I am very pleased to be here today to present the 2023 Budget Proposals at this Joint Session of the National Assembly. This is the last time I will be laying the budget of the Federal Government of Nigeria before the National Assembly.
Features
Kalabash partners with Air Peace, launches Pay Small Small to all destinations
38 mins ago
Kalabash Technology Solutions Limited ("Kalabash"), a financial technology services firm based in Lagos, Nigeria that specialises in developing innovative payment solutions across multi sectors, announced today that it has signed a multi-year agreement with Air Peace, West and Central Africa’s largest airline, founded in 2014, to provide its innovative payment solution, Pay Small Small™ (PSS), to all the airline’s passengers.
Features
Responsible lenders can do more to drive Africa’s financial literacy
45 mins ago
Brett Van Aswergen, Wonga CEO, believes it is the duty of responsible regulated lenders to do more to boost the financial literacy of African consumers. South Africa has all the hallmarks of a well-developed formal financial sector, with a broad range of financial products available, excellent access through in-person and online channels and competitive borrowing…
What's New
Kanye West Defends His Work "White Lives Matter" T-Shirts
1 hour ago
In a post on his Instagram Kanye West defended his controversial "White Lives Matter" T-shirts. "Here's my latest response when people ask me why I made a tee that says white lives matter... THEY DO," the rapper captioned the photo of his black, long-sleeved shirts. West displayed the shirts at his Paris Fashion Week presentation,…

Nigeria
Yakubu not interested in joining presidential race - INEC
8 May
The Independent National Electoral Commission has said its chairman, Prof. Mahmood Yakubu, will not run for president, describing the call for him to do so as "ridiculous". Noting that such would never happen, INEC said its chairman remains an independent umpire committed to free, fair and credible elections. Following the decision of the Governor of…

Opinion
#Meffy2023: A joke taken too far
9 May
In November 2017, it emerged that the Governor of Nigeria’s Central Bank, Godwin Emefiele, had significant interests in an off-shore company registered in Bermuda, which held an account

Nigeria
Emefiele’s 2023 ‘aspiration’ rattles financial experts, lawyers
9 May
After months of speculation, the picking of expression of interest and nomination form by Central Bank of Nigeria (CBN) governor, Godwin Emefiele, to join the race to succeed President Muhammadu Buhari...

Nigeria
Court rejects Emefiele's request to stop INEC from disqualifying him from election
9 May
A Federal High Court in Abuja has ordered the Independent National Electoral Commission (INEC) and Attorney-General of the Federation to appear before it on May 12 to explain why the Central Bank Governor(CBN), Godwin Emefiele, should be disqualified from running for President in 2023. Rumours that Emefiele is willing to join partisan politics have been…

Nigeria
CBN governor sues INEC over alleged plan to disqualify him from election
9 May
Central Bank of Nigeria (CBN) governor Godwin Emefiele has reportedly sued Independent National Electoral Commission (INEC) over an alleged plan to disqualify him. A group of farmers on Friday bought the expression of interest and nomination forms for Emefiele to contest the presidential ticket on the platform of the All Progressives Congress (APC). The CBN…