By Waliat Musa
Share on Facebook Share on Twitter Share on WhatsApp Share on Telegram
• Lagos lawmaker, Johnson promises more democracy dividends Lawmaker representing Oshodi/Isolo Federal constituency 2, Lagos State, Ganiyu Abiodun Johnson, on Sunday facilitated the training and empowerment of youths in Isolo and Ejigbo area of the constituency on fishery and animal husbandry in partnership with the Federal College of Horticulture, Dadin-Kowa, and Manban Global Concepts Nigeria…
1 of 10 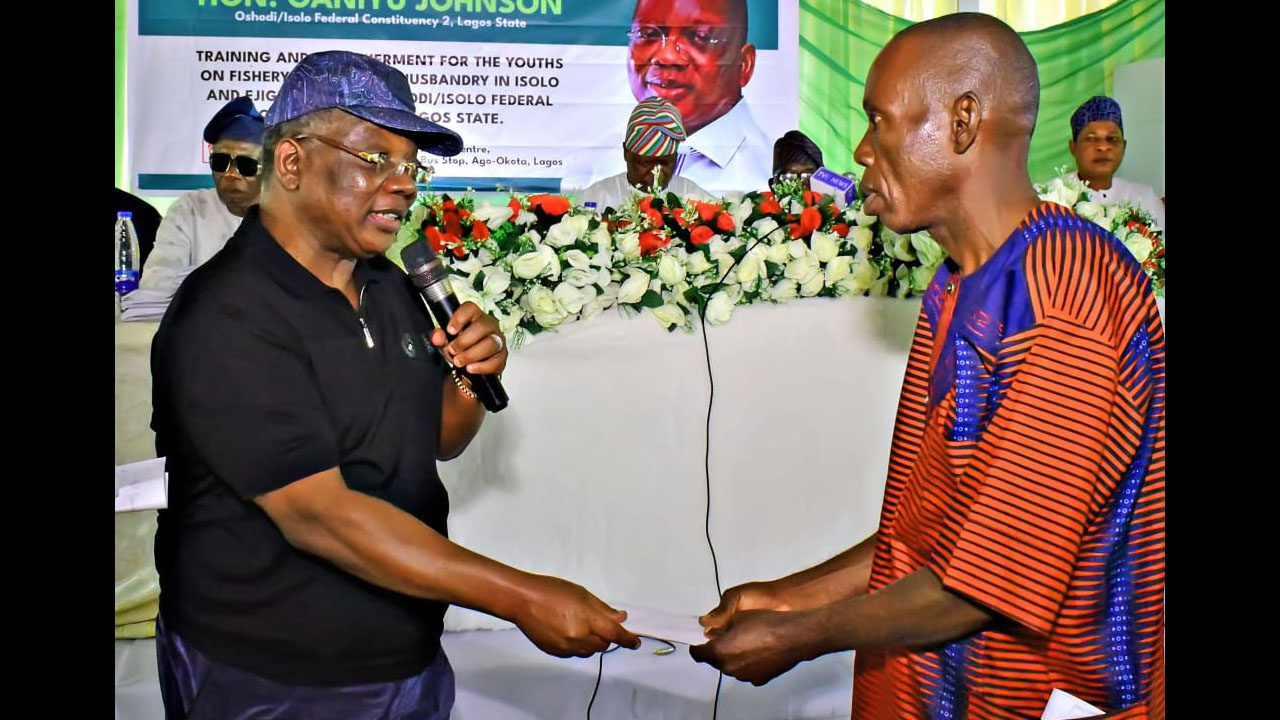 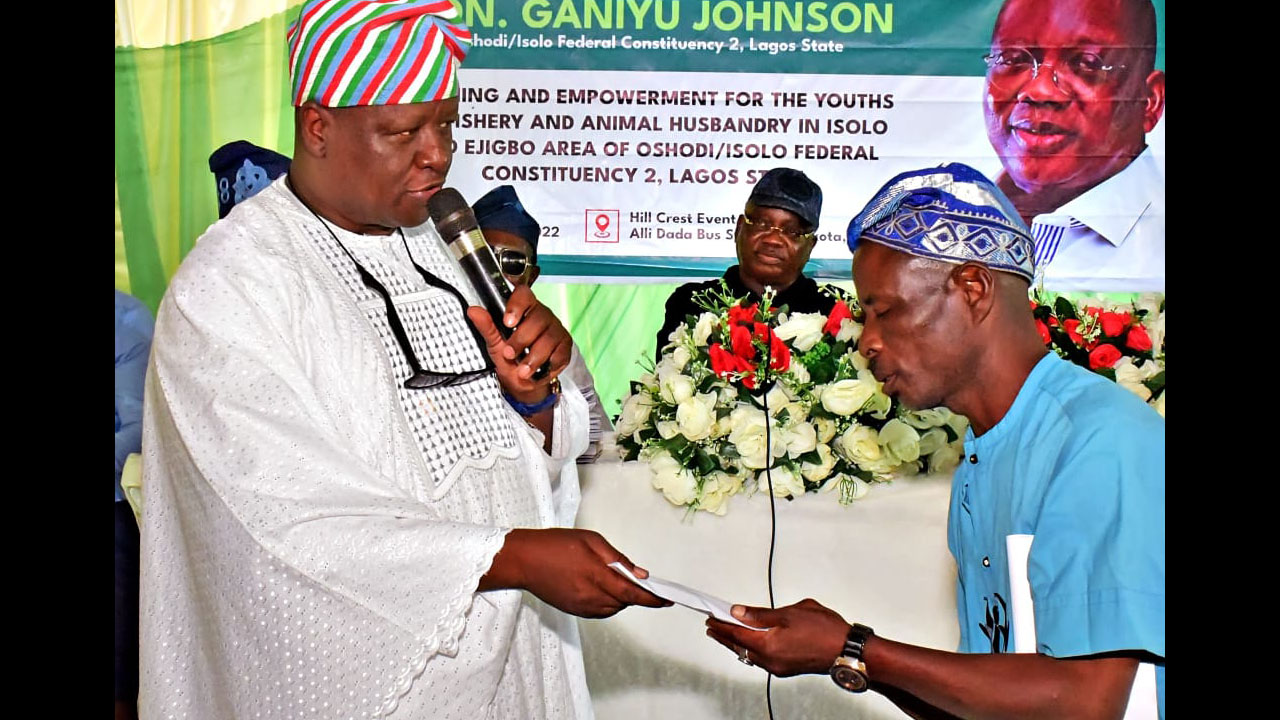 Lawmaker representing Oshodi/Isolo Federal constituency 2, Lagos State, Ganiyu Abiodun Johnson, on Sunday facilitated the training and empowerment of youths in Isolo and Ejigbo area of the constituency on fishery and animal husbandry in partnership with the Federal College of Horticulture, Dadin-Kowa, and Manban Global Concepts Nigeria Limited.

120 constituents were trained on modern fishery and animal husbandry with start-up capital of N50,000 given to each of the beneficiaries.

Speaking during the programme, Johnson reiterated his commitment to gradually but relentlessly pursue economic empowerment programmes aimed at alleviating the hardship of his constituents.

The former Commissioner for Works and Infrastructure in Lagos said residents need to be supported and empowered in a way that they will be self-reliant to overcome the strains of hardship.

“If you give a man fish; you have just given a single meal, but if you train him how to fish, he will eat throughout his lifetime,” he said.

Johnson said beneficiaries will bring meaningful improvement to the economy of the constituency and Lagos being an aquatic state with over 24 million population as a result of the enabling environment and market for fish farming business.

He said: “Fishes are important in achieving food security and poverty alleviation in the country, the benefits of fish farming are much as a result of high demand of fish in the market. Fish gives protein and other essential minerals therefore the demand is high, also the maintenance cost and risk of fish farming is low.”

He further charged the beneficiaries to see the fish farming business as a side income, to augment their learned skills in other vocations to create wealth, value and employment.

The lawmaker restated his commitment to continue with the empowerment programs within the available resources at his disposal and to minimize poverty among his people and as long as he remains in the National Assembly, he will continue to serve constituents and bring democracy and its dividends closer to them.

Chairman of the occasion, the former Commissioner for Information and Strategy, Kehinde Bamigbetan, charged the beneficiaries to improvise and market their products well, while improving the food industry in the state.

He said; “Poverty is a major issue that we are concerned about,the more we reduce the number of people undergoing poverty the better it is for us. This is a golden opportunity to escape poverty and create opportunity for others to survive.”

Provost, Federal College of Horticulture, Dadin-Kowa, represented by Hassan Adesina, lectured the participants on fish farming and goat rearing. He emphasized the benefits of animal husbandry in Nigeria for beginners.

Member, Lagos State House of Assembly, Hon. Jude Idimogu in his goodwill message, charged the beneficiaries to utilize the grants well and put into practice what has been taught

Olatunji Ajose, a beneficiary said the programme would increase their productivity and reduce the level of poverty in their constituency assuring the organisers that the grants received by him will be used judiciously for the fish farming project.

World
Guinea opposition spurns talks with junta
1 hour ago
Opposition forces in Guinea on Monday spurned the ruling junta's offer of dialogue, accusing it of authoritarian rule and "unacceptable" violations of fundamental rights.
Nigeria
Why I want to be Kano governor: PDP guber candidate
2 hours ago
Muhammad Sadiq-Wali, the Kano State governorship candidate of the Peoples Democratic Party (PDP) says his main target is to restore the lost glory of the state, known as the centre for commerce.
World
Ebola death toll in Uganda climbs to nine
2 hours ago
The death toll from an Ebola outbreak in Uganda has risen to nine, the health ministry said Friday, two weeks after the authorities announced an epidemic in the centre of the country.
Nigeria
Yobe Deputy Governor loses 100-year-old brother
3 hours ago
Barde, who died on Sunday in Gubana village after a protracted illness, was the elder brother of Yobe Deputy Governor, Alhaji Idi Gubana.
Nigeria
We’re against violent agitation in Nigeria – Ohanaeze
4 hours ago
Ohanaeze Ndigbo, an apex Igbo social-cultural organisation, says the body is against violent agitation in any form because the group believes in the continued corporate existence of the country.

Nigeria
Osun poll: Oyetola appeals to supporters to remain calm
17 Jul
Gov. Agboyega Oyetola of Osun has appealed to his supporters to remain calm after he lost his re-election to Sen. Ademola Ademola.
APO Press Releases
Green Climate Fund approves new projects in Benin and the Gambia
19 Jul
Download logoThe Board of the Green Climate Fund (GCF) have approved $60 million in funding to support climate-resilient projects in Benin and the Gambia promoting sustainable practices in vulnerable rural communities of these countries.   The Food and Agriculture Organization of the United Nations' (FAO) will offer its expertise to both projects for the sustainable…

Maritime
WTO rallies Nigeria on checking illegal fishing practices
21 Jul
As part of efforts to monitor global waters presently characterized by illegal and unreported fishing practices, the World Trade (WTO) has entered into agreement with member countries to deposit an instrument of acceptance at the door post of the world body for ratification within six to nine months.

Guardian Arts
A soldier and a patriot: The life of Attahiru
22 Jul
The book, titled, The Man, The Soldier, The Patriot, is a volume on the late Lt General Ibrahim Attahiru, the 21st chief of Army Staff (COAS). It is a celebration of a man who did all within

Nigeria
NWTF, GEW laud INEC on Osun guber election
22 Jul
The Gender and Election Watch (GEW), an initiative of the Nigerian Women Trust Fund (NWTF), has lauded the Independent National Electoral Commission (INEC) and all stakeholders for the peaceful