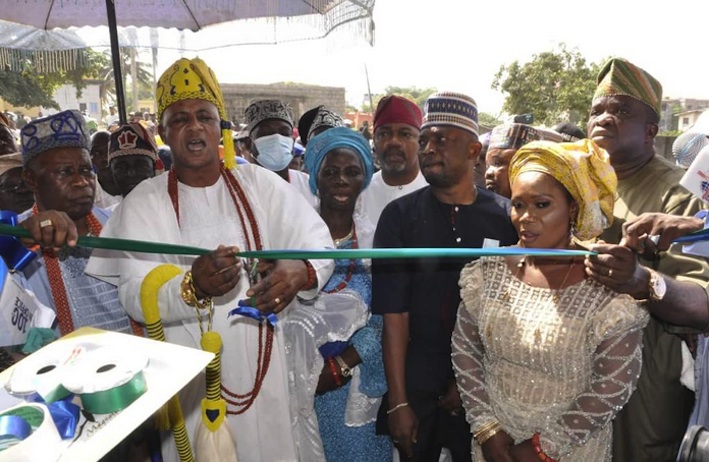 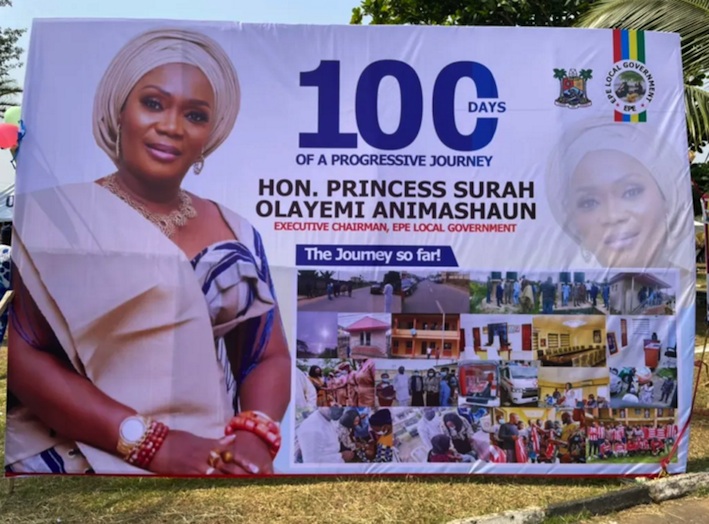 Handing over a renovated Customary courtroom, Animashaun noted that the project was in line with her promise to the people of Epe land to deliver dividends of democracy at the grassroots and make the impact of governance to be felt by all.

Highlight of the ceremony, which held at the local government secretariat and drew a large crowd includes distribution of items of such tailoring machines, grinding machines, generator sets, exercise books, school bags and stationeries among others.

While rendering her stewardship, Princess Surah disclosed that the impact of her administration has been felt across key areas such as infrastructure, sports, education, health, security, agriculture, tourism, staff welfare and economic empowerment.

Others include recruitment of teachers, rehabilitation and training of local security officials such as OPC and Ibile, empowerment of artisans, welfare support for the aged and widows and commemoration of World Tourism Day with the launch of Epe Alaro Tourism.

While rendering her stewardship, Princess Surah disclosed, “The significance of 100 days in office is to render account to the people and let them know that they didn’t elect a statue but someone who can represent them well. I want to show that I’m capable and with God on our side, there’s nothing we cannot achieve. As a woman and the first female executive chairman, I want to totally change the face of Epe.

Sport
Ugochukwu Oduenyi's football journey to Serbia’s FK Javor-Matis Ivanjica
31 mins ago
Ugochukwu Ogbonnaya Oduenyi is one Nigerian player who has gone round the mill in search of greener pastures and his latest adventure to Serbian club FK Javor-Matis Ivanjica, a club he joined on January 17, will see Oduenyi leading the attacking line of the second division side. The 25-year-old striker decided early on in life…
News
Governor Okowa has taken Delta to new heights, says top aide Kevin Olu
59 mins ago
Kevin Olu, a Senior Special Assistant to Governor Ifeanyi Okowa,  has said that his principal has taken Delta state to new heights of development in all sectors and indices for measuring human and societal strides. Olu, who has been in the corridors of power for over eight years now and has closely worked with other…
Sport
Tunisia shock Nigeria, Comoros to use outfield player as goalkeeper
1 hour ago
Tunisia shocked Nigeria and Burkina Faso edged Gabon on Sunday to set up an Africa Cup of Nations last-eight showdown, while minnows Comoros prepared to use an outfield player as a goalkeeper when...
Nigeria
Truck falls on passenger bus, kills driver in Ogun
2 hours ago
A passenger bus driver lost his life on Sunday evening when a truck fell on the bus at Toll Gate on the Lagos-Abeokuta Expressway.
World
Europe could be headed for pandemic 'endgame'
2 hours ago
The Omicron variant has moved the Covid-19 pandemic into a new phase and could bring it to an end in Europe, the WHO Europe director said Sunday.

Saturday Magazine
Violent clash as Lagos clamps down on daring Okada riders
18 Dec
More than ever before, commercial motorcycle operators popularly known as Okada riders in Lagos State now constitute a menace to the residents and the government. Recently, they have become so daring and emboldened to act in manners detrimental to safe living in the society. They operate with unregistered motorcycles and seem to be running a…

Sport
Lagos reveals plan to open eight new stadiums in May, 2022
20 Dec
Lagos State Government will by May, next year, open eight of the new stadiums it is building across the state to boost sports at the grassroots, officials of the state’s Sports Commission have revealed.

Nigeria
Experts hinge Nigeria’s development on equity, equality
20 Dec
Development experts and members of the Nigerian Institution of Surveyors (NIS) have stressed that the enthronement of equity and equality would guarantee sustainable development in the polity.

Sport
Showdown in Ikoyi as Ultimate Golf Challenge returns
21 Dec
In a game that can only be likened to the famed ‘Showdown in Sherwood,’ a one-day event that pitched the then world number one, Tiger Woods, against Spaniard Sergio Garcia, nicknamed El-Nino, the serene site of the golf section of Ikoyi Club 1938...

Nigeria
Lagos, Platinum set to rebrand Queen of Ibile pageant
23 Dec
Lagos State government’s Ministry of Tourism, Arts and Culture, in partnership with Plantinum Entertainment Nigeria Limited, is set to objectify the concept of Queen of Ibile pageant with the performance of I AM LAGOS on stage.