By Dennis Erezi
Share on Facebook Share on Twitter Share on WhatsApp Share on Telegram
Several major Nigerian newspapers Monday carried a front-page advertorial that accused the authorities of planning to clamp down on freedom of information. Sponsored by the Nigerian Union of Journalists, Nigerian Guild of Editors and Newspaper Publishers Association of Nigerian, the advertorial, which featured a man behind a cage, said the Nigerian government is sponsoring amendments…
1 of 10 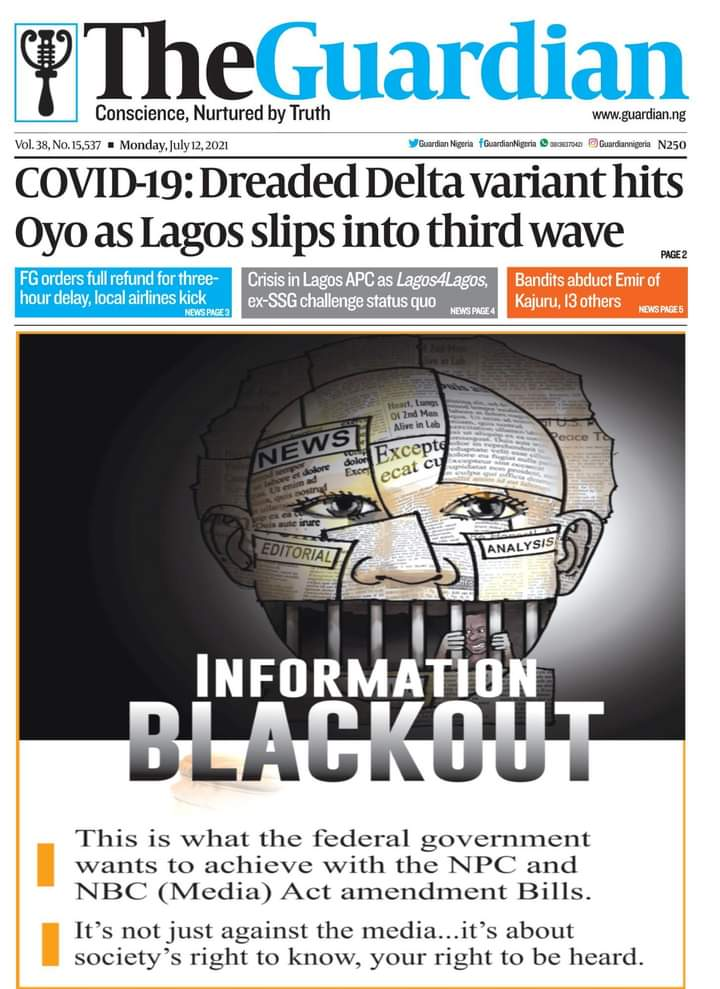 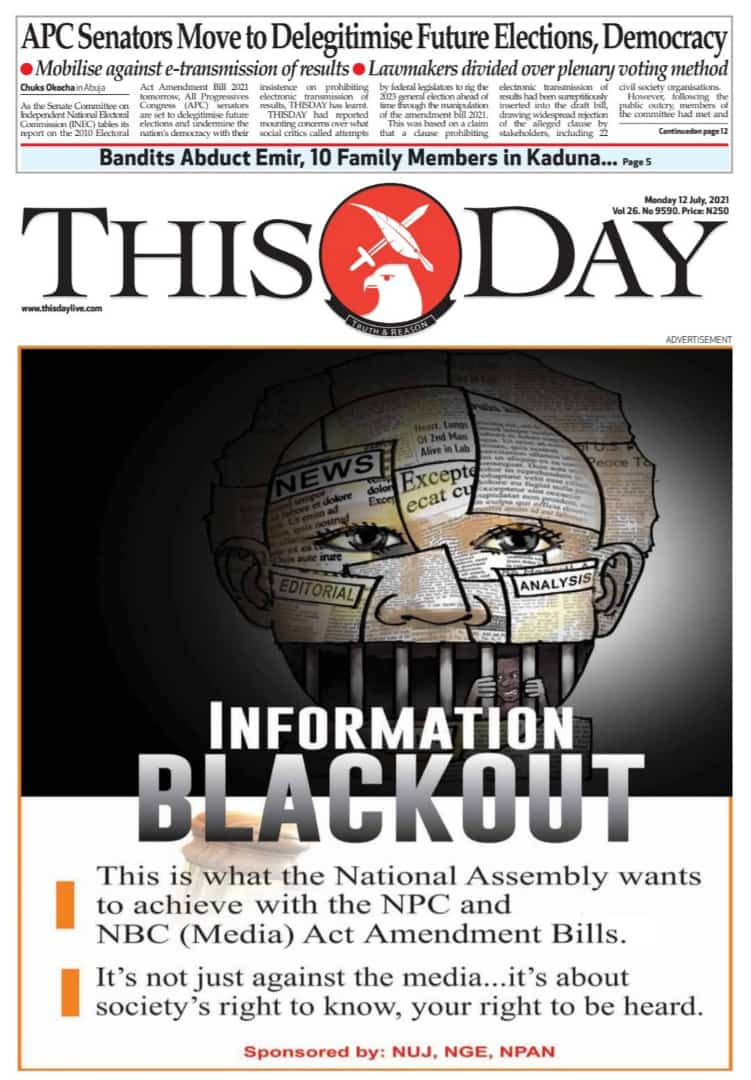 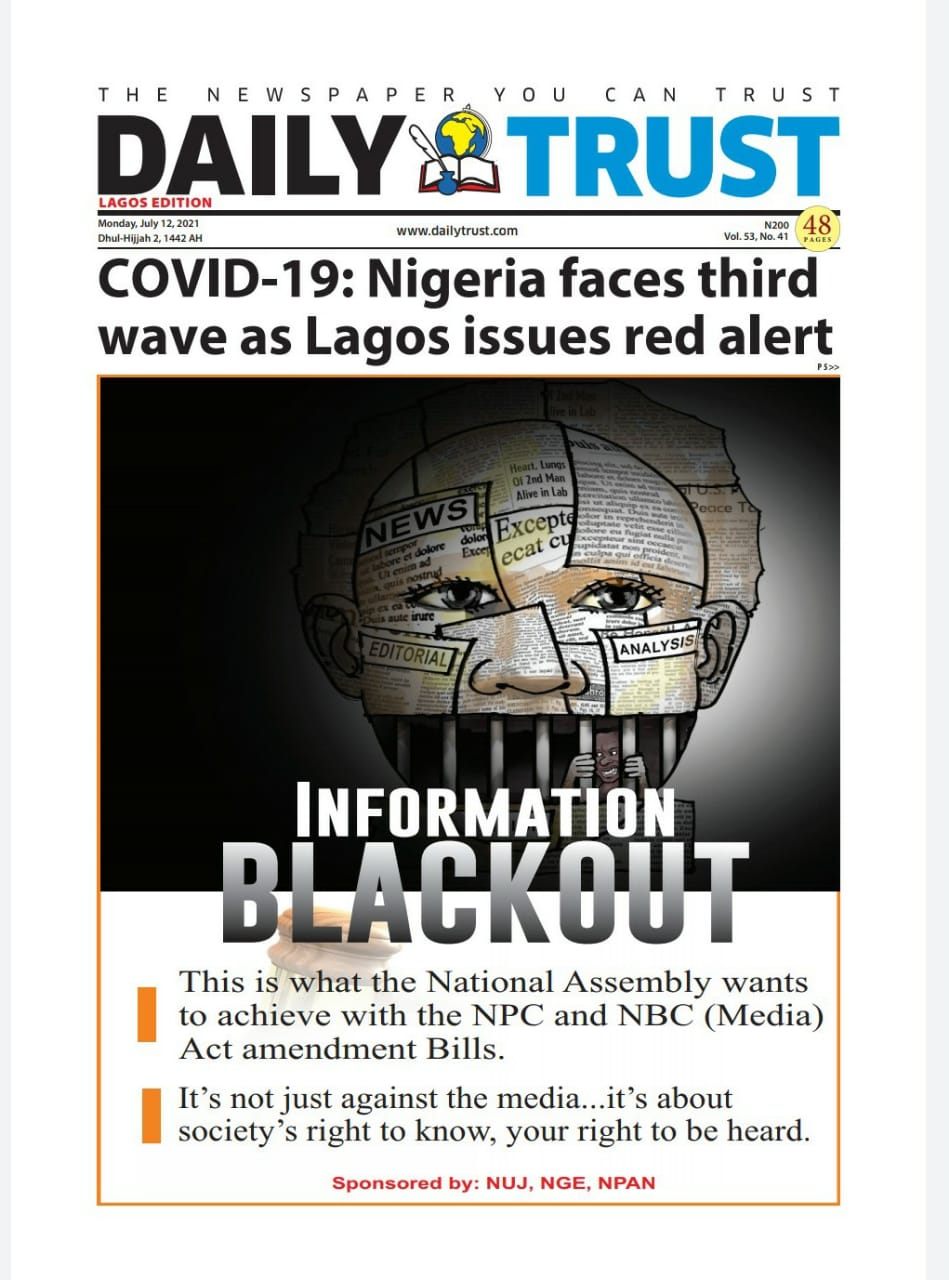 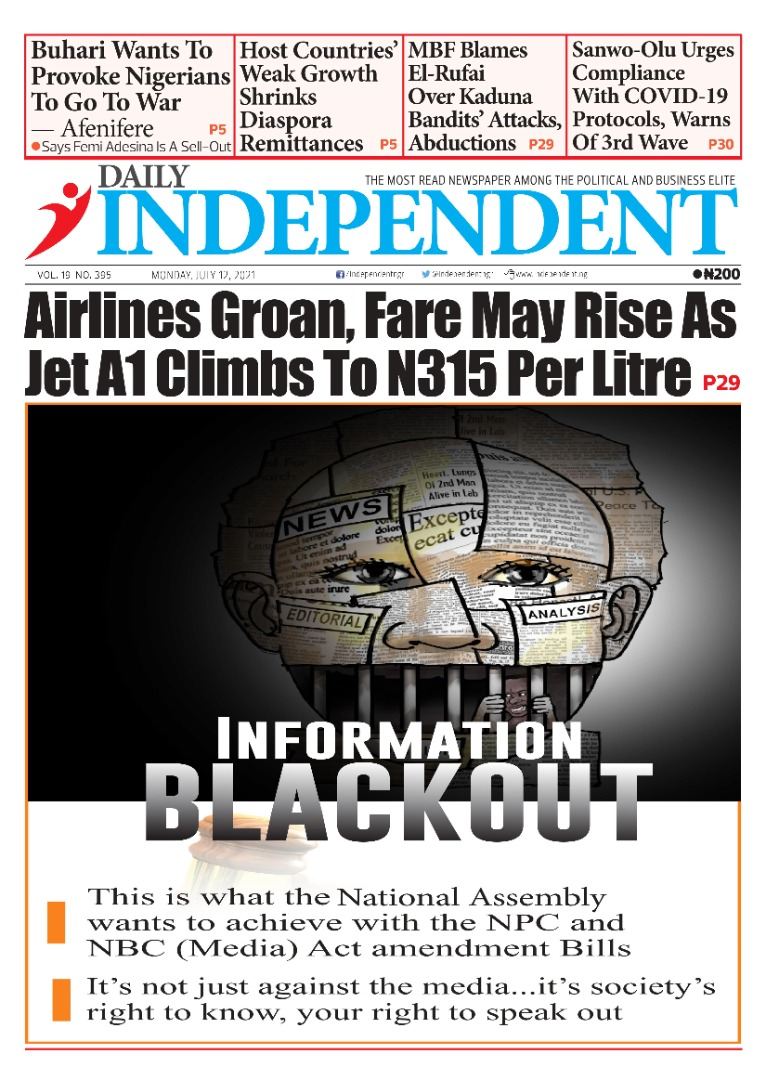 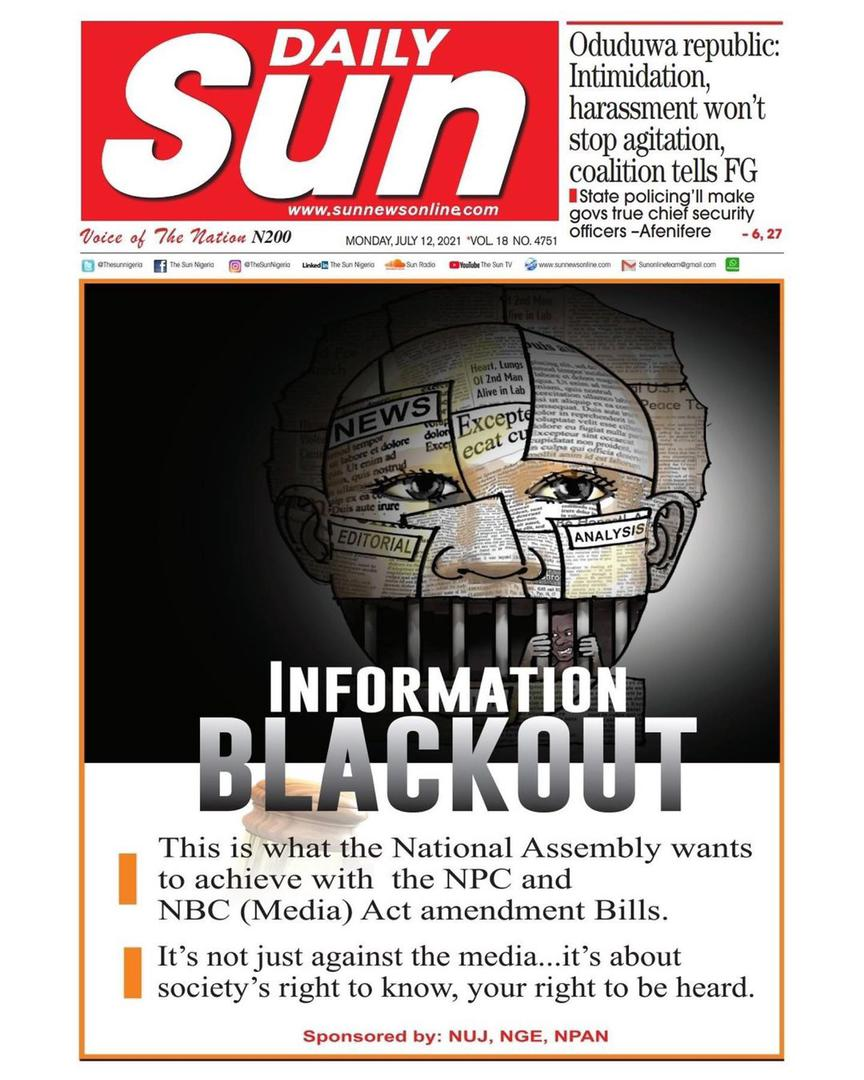 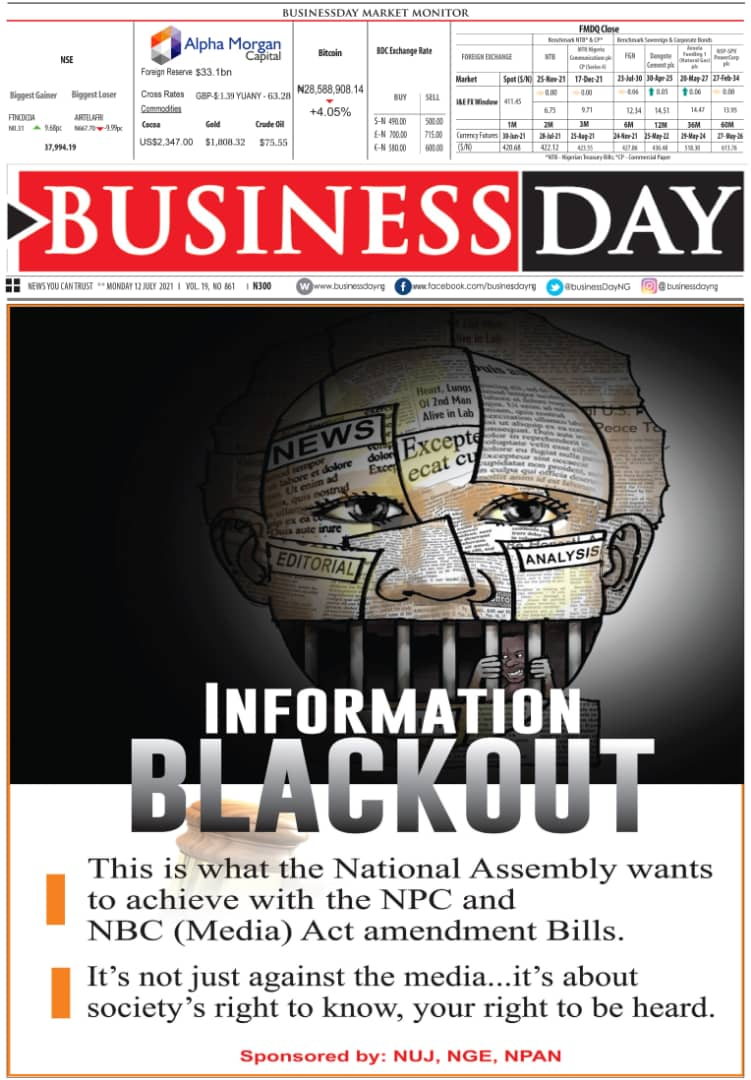 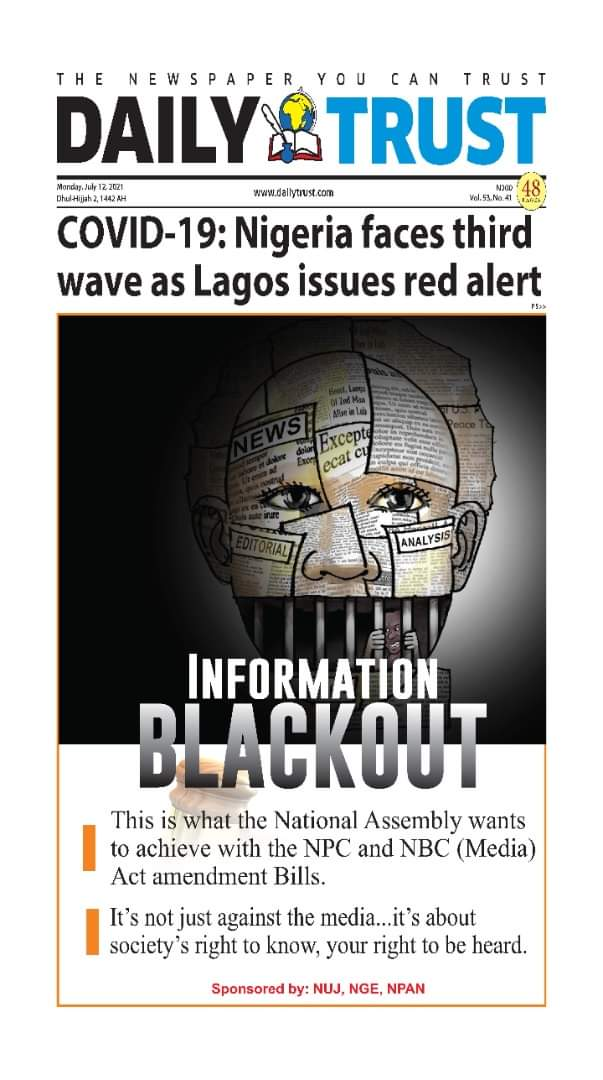 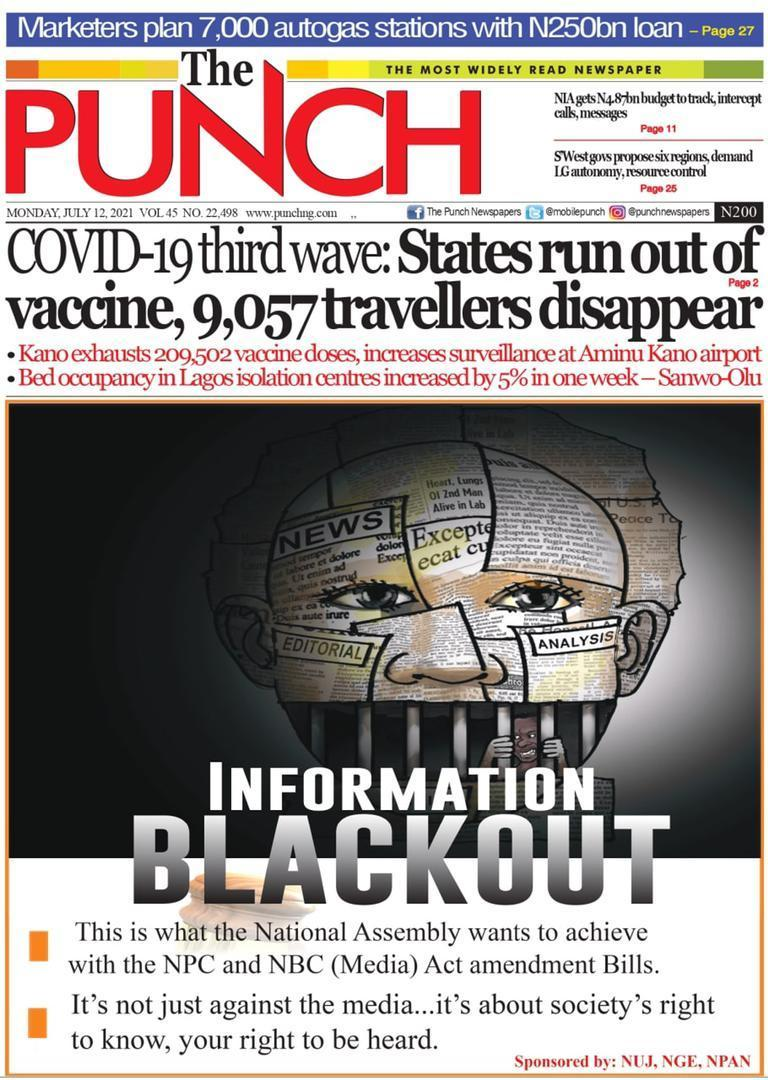 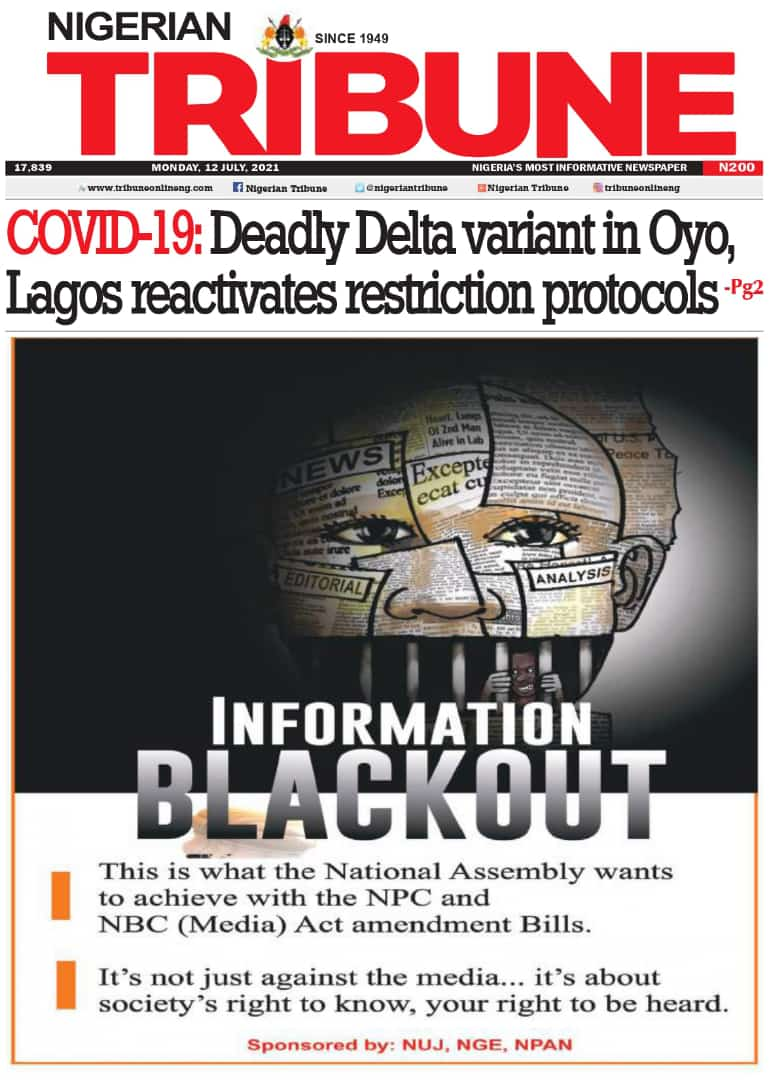 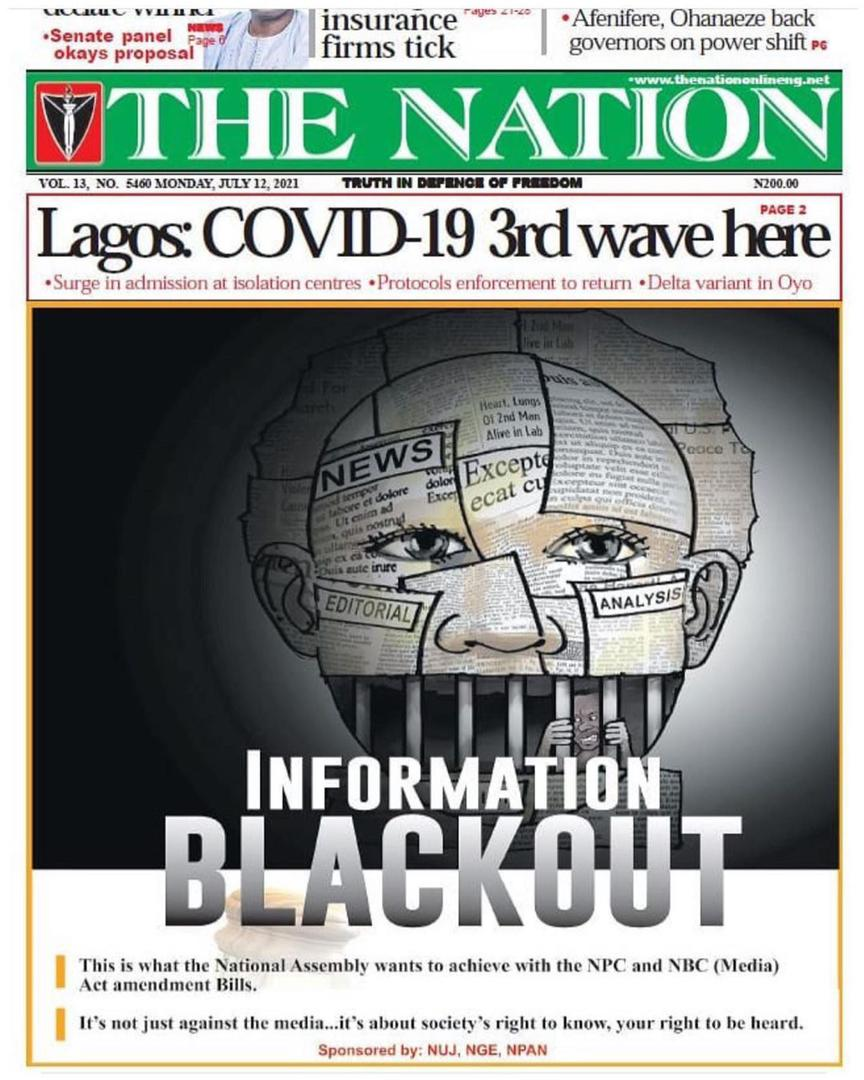 The Nation cover
Several major Nigerian newspapers Monday carried a front-page advertorial that accused the authorities of planning to clamp down on freedom of information.

Sponsored by the Nigerian Union of Journalists, Nigerian Guild of Editors and Newspaper Publishers Association of Nigerian, the advertorial, which featured a man behind a cage, said the Nigerian government is sponsoring amendments for two acts – Nigerian Press Council (NPC) and National Broadcasting Commission (NBC) acts.

“Information blackout – this is what the federal government want to achieve with the NPC and NBC (Media) Act amendment bills,” the advertorial published by The Guardian said.

“Federal government” was replaced with “National Assembly” in the one published by Punch, Tribune, The Nation, Tribune, Sun, New Telegraph and Daily Trust.

The publication on Monday marked a turning in the media’s fight against the amendment bills.

Many journalists and groups have condemned the proposed amendments, describing them as an attempt by the Buhari government to stifle the freedom of speech and a way of muzzling the media into silence.

“Nobody is saying you should not amend a law if it will advance democracy or to accommodate technology but provisions that do not promote press freedom are not democratic,” Lekan Otufodunrin, a former editor with The Nation and the CEO of Media Career Development Service, told The Guardian on Monday.

NUJ president Christopher Isiguzo told Channels Television in June that the union is opposed to the amendments and that any regulation that tends towards the control of the media by the government would be resisted.

“We are opposed to the planned amendment. We told the National Assembly that the matter was of contention in court and it would be sub-judice to discuss,” Isiguzo said.

Nigerian government’s recent record on free press and freedom of speech is not glowing.

The government last month suspended the use of Twitter in the country, claiming that the social media platform was being used to cause division and undermine the “corporate existence” of the West African nation.

Nigeria’s information minister Lai Mohammed blamed Twitter for the violence that trailed the #EndSARS protest against police brutality in major cities in the country.

Mohammed pointed to the open support for the protests by Twitter’s CEO Jack Dorsey for his claims.

Critics of the government believed the suspension was a knee-jerk reaction to the deletion of a tweet by President Muhammadu Buhari.

Twitter yanked the tweet, which invoked the dark memories of the Nigerian Civil War, off its platform, noting that it violated its “abusive behaviour” rules.

Days after the suspension came into effect, NBC mandated all radio and television stations in the country to stop using the platform and threatened to suspend the operating license of any station that goes against its order.

A source told The Guardian that newspaper publishers resolved to continue to use the social media platform despite the government suspension order.

The Monday advertorial is opposing a bill at the House of Representatives to amend the Nigerian Press Council (NPC) Act Cap N128, Laws of the Federation of Nigeria 1992.

The NPC Amendment Bill is sponsored by Olusegun Odebunmi, the chairman of the House of Representatives Committee on Information, National Orientation, Ethics and Values, which handled the recent public hearing on the contentious bill.

According to Section 3 (c) of the bill, “with the approval of the minister in charge of information, establish and disseminate a national Press Code and standards to guide conduct of print media, related media and media practitioners.

The minister will also approve penalties and fines against violation of the Press Code by print media houses and media practitioners, including revocation of license. The minister is to consider applications for the establishment, ownership and operation of print media and other related media houses.

The bill also proposes punitive measures for media outlets and journalists that act contrary to its provisions.

The section said erring journalists and media houses “shall be liable to a fine of five million naira only or three years imprisonment to the person or the promoter (in case of body corporate).”

The bill proposes that “persistent refusal to comply with the directives of the council, the medium or journalist so sanctioned in accordance with subsection (1) of this section, commits an offence and is liable on conviction” amongst other monetary fines.

The bill mandates media houses to be members of the press council or be liable to “conviction or to a fine of five million naira or a term of three years imprisonment or both and to an additional fine of twenty thousand naira for every day the offence continues.”

‘An anti-democratic law’
Section 22 of the 1999 Constitution of the Federal Republic of Nigeria (As amended) states that the press, radio, television and other agencies of the mass media shall at all times be free to uphold the fundamental objectives contained in this chapter and uphold the responsibility and accountability of the government to the people.

The proposed NPC amendment act intends to relegate the role of the media, according to Otufodunrin insisted.

Otufodurin argued that “the impression to amend the law was not the intention but the intent to impose restrictions that not good enough for a democratic setting.”

He cited the directive of the National Broadcasting Commission (NBC) to radio and television stations to ‘deinstall their Twitter accounts’ after the Nigerian government banned the social media platform.

The media executive urged practitioners to “speak up even if they shun us, the world will know that they heard our voice.

Nigerian Senate spokesman Ajibola Basiru said the current efforts to amend the NBC Act and other relevant laws should not be misinterpreted as moves to stifle freedom of speech and free press in Nigeria.

He said the current attempt to amend the NBC Act and the Press Council Act was to improve and sanitise and not to choke the civic space.

Nigeria
Nigeria’s biggest challenge in 2021 is insecurity, says Mohammed
31 Dec
Minister of Information and Culture, Lai Mohammed, has said that insecurity is the major challenge faced by the Federal Government in 2021.

Business
Four years on, Nigeria lags behind in open skies, $1.3b revenue agenda
31 Dec
With no structure in place these past four years, Nigeria lags behind other African countries in the race for open skies agenda in air transport, which is estimated to be worth over $1.3 billion in revenue earnings yearly.

Nigeria
Why Igbo should be president in 2023, by Ikpeazu
31 Dec
Abia State governor, Okezie Ikpeazu, yesterday, said the Southeast should be considered for Nigeria’s presidency in 2023 because of the people’s understanding of the country’s diversity more than other regions.

Nigeria
Buhari signs N17.126trn 2022 Budget
31 Dec
Nigeria President Muhammadu Buhari on Friday signed the 2022 Appropriation Bill titled “Budget of Economic Growth and Sustainability” into law at the Presidential Villa, Abuja. The budget, valued at N17.126 trillion, was recently transmitted to the President by the National Assembly, on Friday, December 24. Buhari also signed the Finance Bill 2021, which he said…