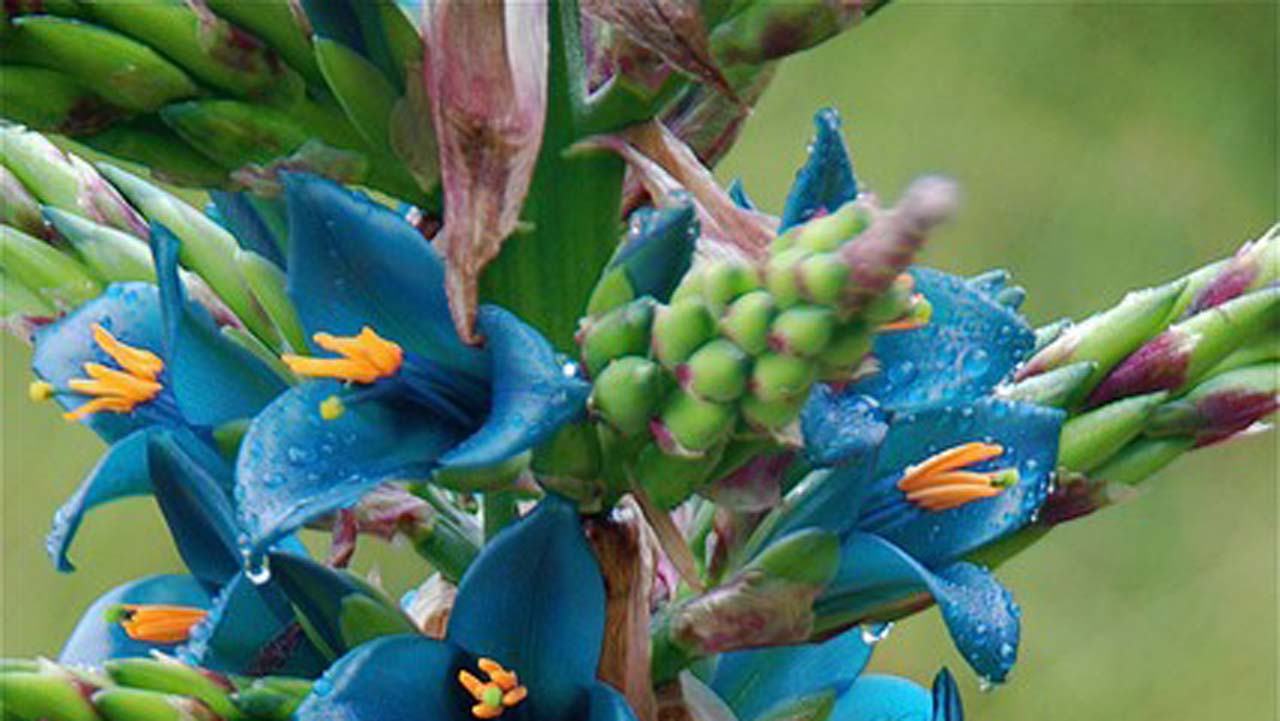 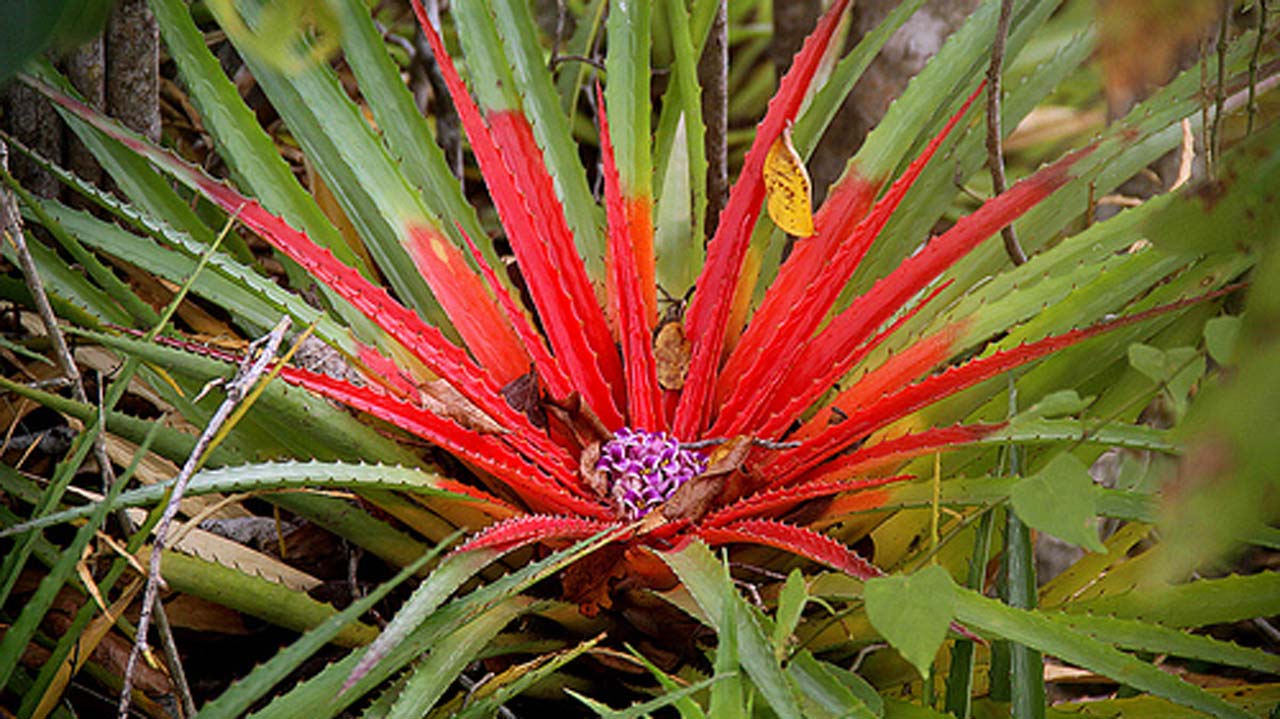 Bromelia balansae “Heart of Flame”, “Heart of Fire” is a terrestrial bromeliad 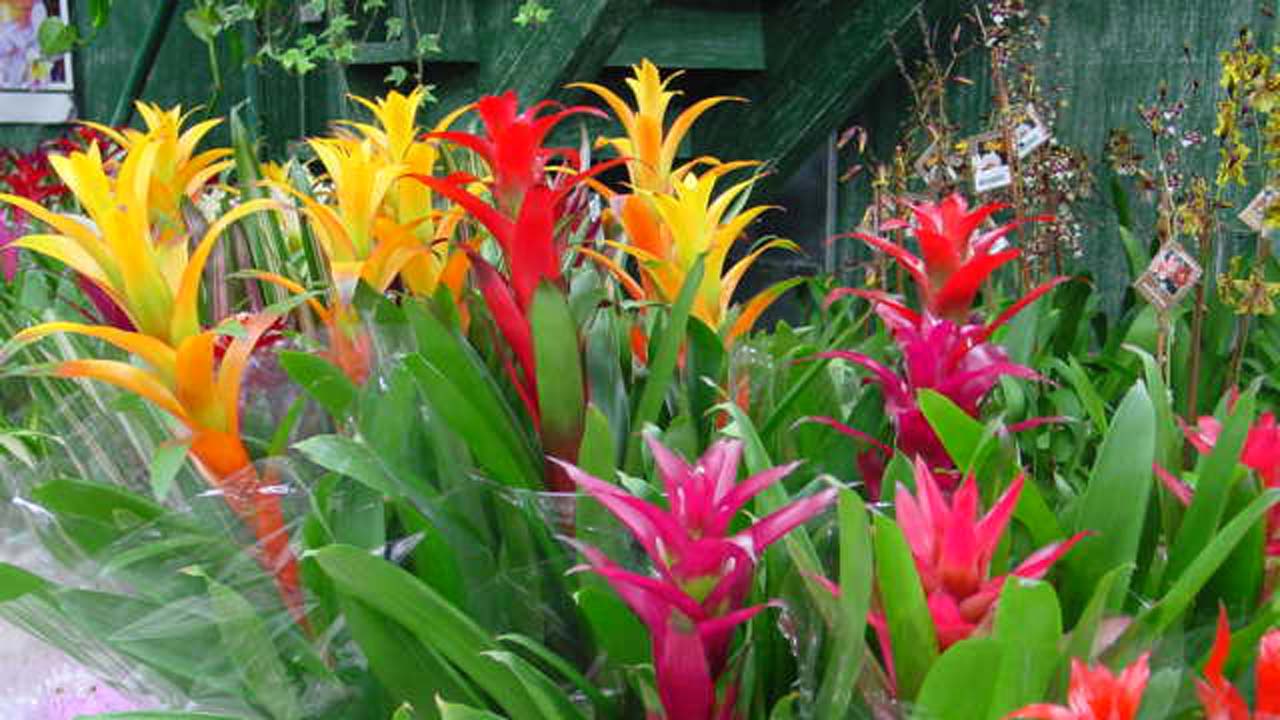 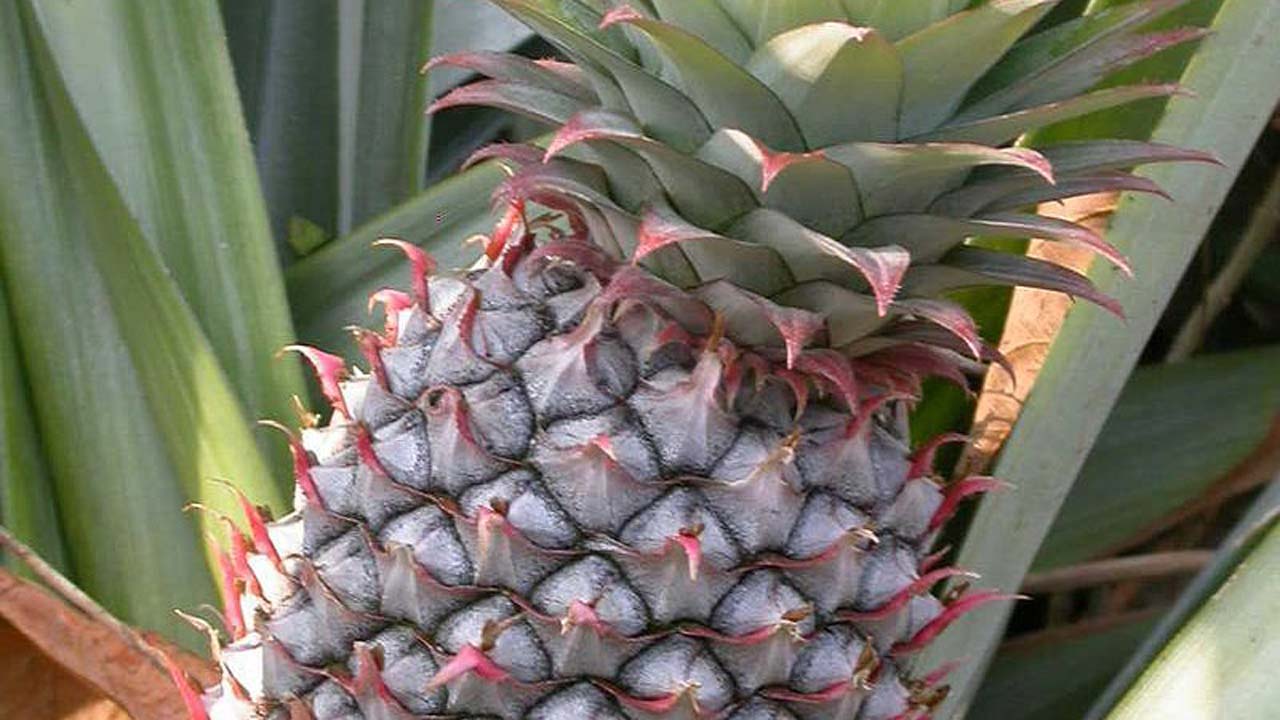 So what is the relationship between the two? The fact is, a pineapple is a bromeliad. Bromeliads are members of a plant family known as Bromeliaceae.

The pineapple is one of the best-known plants of this family. Bromeliads are among the most spectacular house and landscape plants, but they are also one of the most overlooked. Bromeliads commonly grow in the tropics and subtropics and majority of the species are found in tropical rain forest. In the wild habitat they can be found clinging to trees and cracks in cliffs in some regions. Many are tough and long-lived, and they will combine comfortably with other plants in your home.

There are about 3,000 species of bromeliad (and more are being discovered almost every week it seems). They vary in size, color, distribution and ease of growth. Some are small enough to sit on the coffee table indoors, while others grow as long or tall as 30 feet.

This is one of the most colorful of all the plant families in terms of both foliage and flower varieties. Bromeliads come in an unbelievable variety of colors, some are nearly fluorescent, and many are unique among the plant kingdom. Most bromeliads are epiphytic in nature and live in humid conditions. Epiphytes are plants with gripping roots that hold the plant onto its chosen surface. This surface may be tree bark, rock or even cement. In indigenous terrain you can see epiphytic bromeliads literally swinging from trees.

Bromeliads grow in a rosette with a cup-like depression at the center. This depression is responsible for collecting nutrients and water. Unlike most plants, the roots of a bromeliad are mostly for adherence purposes and do not uptake the plant’s needs. Rainwater and dew fall into the cup and other plant litter; small insects, snails, frogs and organic materials end up in the depression, serving as a source of minerals. Also creating a fascinating and dynamic microenvironment. The rosettes grow by adding new leaves in the center, which becomes impossible after the flower has bloomed.

Although most bromeliad are epiphytic and live in humid conditions, there are some very desert-oriented that tolerate full sun, hot sun and very little water at all. Some of the epiphytic species grow in rocks and crevices and aren’t true epiphytes, though they act like they are, taking no nourishment from any soil.

Some have ‘ordinary’ root systems and can be planted in the garden as one would most other plants. But true epiphytes are often the most fascinating, seeming to live off air and nothing else (a.k.a. air plants, sky plants). These plants still have roots, but their roots are mostly to hold them onto something. Few bromeliads can tolerate cold frosty climate because they grow in warm temperature or tropical zones. But the bromeliads that are best suited to full sun just also happen to be the ones that can tolerate a little cold as well. Not all bromeliads grow well indoors, but many do. Since many of these plants originally grew in trees, good air circulation and excellent drainage are very important.

When growing, bromeliads you do worse with too much water or heat rather than with too little of either. With few exceptions, bromeliads are monocarpic. Bromeliads are perennial monocotyledons plants that have one seed leaf like lilies or corn, rather than two seed leaves like roses or beans. Some species are not monocarpic; Dyckias and Tillandsias are notable exceptions. Many bromeliads have spectacular flowers, but the flowering signifies the end of the plants life. Bromeliads do not re- bloom, they only bloom once in their life. But they will produce a small ‘pup’ plants on the outer perimeter of their base. A bromeliad is a slow growing plant. The pups will take about six months to grow approximately one-third the size of the mother plant. When the pups reach that size, separate them from the mother plant. Allow the young plants to grow at least 6months, after which time they could mature enough to bloom. The mother may sometimes survive a generation or two before finally dying off. There are dozens of genera, and varieties in cultivation and all are worth collecting and using in the landscape. It would be impossible to cover all bromeliads, what’s growing out there in the world. The following are a brief overview of some of the most popular genera.

Aechmea:
These plants are some of the best-known and most widely grown bromeliads.
This is a very large genus of plants with generally large, spectacular flowers. These make excellent indoor plants as their flower tend to last for a long time. Most are tropical and epiphytic; a few very terrestrial forms are popular, including some that adjust well to arid soils and full sun exposure. In general Aechmeas have relatively wide, round tipped leaves that are heavily armed with sharp (though many are not armed) forming horizontally oriented wide, spreading rosettes. In general these tend to be fairly easy plants to keep but are prone to rot if their soils are kept too wet. Probably the most recognizable Aechmeas is Aechmea fasciata. Aechmea fasciata ‘Lauren’, is a variegated variety of this species. Aechmea recurvate an arid climate species. Aechmea recurvate var.benrathii is a gorgeous species that does well both in pots and in desert like landscape.

Ananas:
Anybody who has eaten a pineapple the ananas comosus is at least familiar with this genus. The pineapple is the most well-known ananas plants. Most of these are terrestrial plants, which have ‘pineapple-like’ flowers. These plants have long strap like, sharply armed leaves and sucker profusely. The variegated pineapple plant is grown for its foliage, not for its fruits. The gorgeous bright red, green and cream striped leaves are held rigidly off a low stem. Their bright fruit is attractive but rather bitter. The plants make lovely and interesting ornamental houseplants or potted outdoors. The pineapple flowering houseplant is a bromeliad and requires similar care. Care for the variegated pineapple is the same as an edible pineapple, but don’t expect fruiting overnight.

Both types can take up to five years to produce fruit. Pineapple Bromeliad varieties Bromeliads are a family of sometimes stemless, sometimes epiphytic plants. They may also be grown in an almost soil-free environment made up of other materials such as sand, peat and bark. There are hundreds of varieties of pineapple. Not all of them produce a yellow-fleshed fruit armored in green. There are also red and blue varieties. The best pineapple bromeliad for the home grower is the miniature types. These plants are easier to keep to container size.

They can be grown as striking houseplants. The variegated form is colorful and lively, well suited for a partially sunny room. Growing variegated pineapples in full sun is not recommended as the best color comes in lower light areas. The plant is a novelty plant and not so easy to find as regular pineapple bromeliad varieties. Mature plants can produce a flower within a year of planting.

Bromeliads:
Though a fairly large genus (about 50 species), only a few are encountered in cultivation. Most are terrestrial and relative hardy plants for drought and cold hardiness. Their flowers are not spectacular, but the foliage can be remarkably brilliant in some species, notably Bromelia balansae.

Guzmania:
These plants named after the 18th century Spanish naturalist Anastasio Guzman, are one of the most beautiful and recognizable types of bromeliads, especially when the plant are grown in large chumps. These are unarmed, lily-like plants (flat, green leaves) with the spectacular red, yellow, pink, purple, white and grow two or more feet wide, with flowers that seem to last forever, which is why they are so popular. This is a large genus of over 150 species, although only a few are common in cultivation. Most almost all cultivated are hybrids.

Portea:
This small genus of six species from Brazil named after Dr Marius Porte, a French plant collector. T his type of bromeliad plant grows quite large and need plenty of room.

Tillandsia:
Otherwise known as air plants, this is the largest genus (about 500 species) in the bromeliad family. Almost all these are air plants, though few can be grown in soil, or are epiphytic. Their leaves tend to be whitish and scaly, though some smooth green varieties exist. Many have twisted; bizarre leaf patterns and some come in spectacular shades of red and pink. Their flowers tend to be quite colorful with some being incredible, while others are subtle and small. These are not monocarpic plants so with proper care; you can keep these plants around for lots of years. For most part, Tillandsia seem to tolerate more direct sun than most other epiphytic bromeliads, though many still cannot tolerate blistering hot sun. And most being air plants over watering is less of an issue. Tillandsia sky plant (Tillandsia ionatha) is a superior specimen, which doesn’t require traditional pot and soil combinations. This member of the Bromeliad family will grow epiphytically on a variety of organic surfaces. ‘Sky plants’ Bromeliads are found in most part of the world, but are mostly tropical to subtropical plants.

They grow without root support in soil and can even be found in habitat hanging from trees and even rock surface. Sky (or air) bromeliads are easy to grow and make interesting presentation on bark or logs. Once you get your air plant mounted, Tillandsia sky plant is one of the easiest plants to maintain. You can attach the plant at its base to a cork bark form, branch or even shell. You can also place it freely into a terrarium or wedged among some rocks. The key to growing sky plant is humidity. Mist the plant daily or place sky plant bromeliad in the kitchen or bathroom, where humidity is naturally high. These plants perform best in indirect but bright light. Propagation of Tillandsia is simple, growing from offshoots or ‘pups’ is best way to create new plants.

US soccer scraps 'no kneel' anthem policy after vote
6 mins ago  Sport
Nigeria records 155,417 COVID-19 cases in 1 year
32 mins ago  Nigeria
4 Common Eating Disorders And What You Should Do
50 mins ago  Wellness
Nigerian-Canadian firm to commence gold export in June: Minister
52 mins ago  Nigeria
Nigeria to receive four million doses of Covid-19 vaccines on Tuesday
1 hour ago  Nigeria