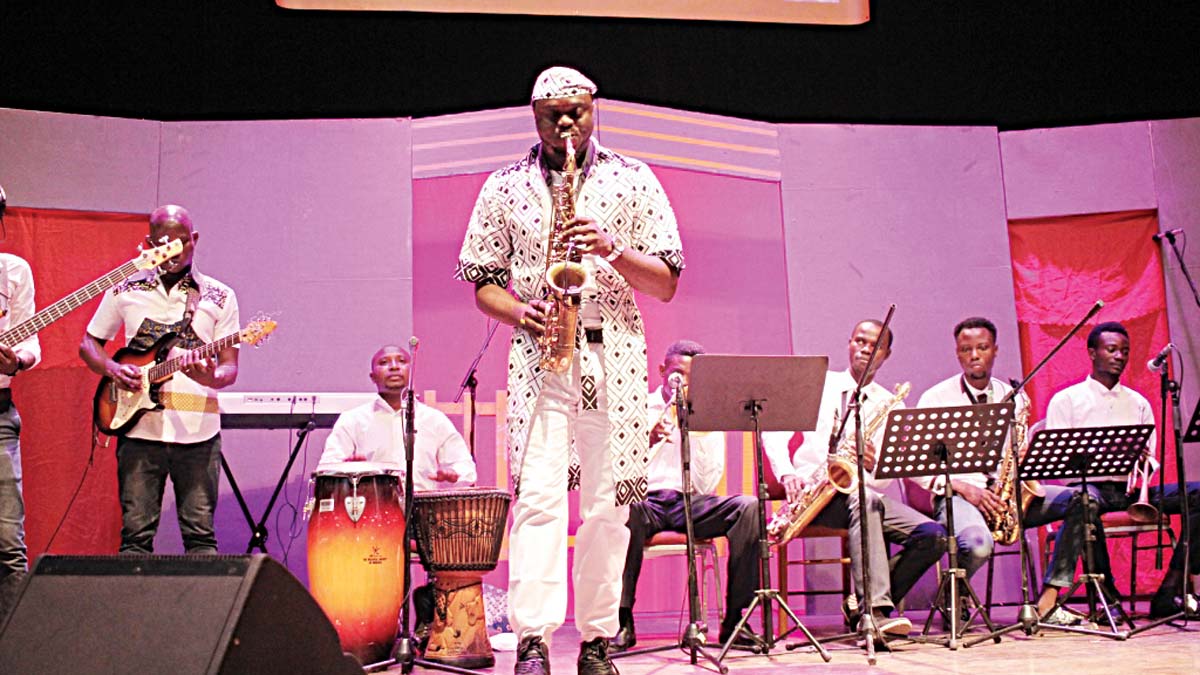 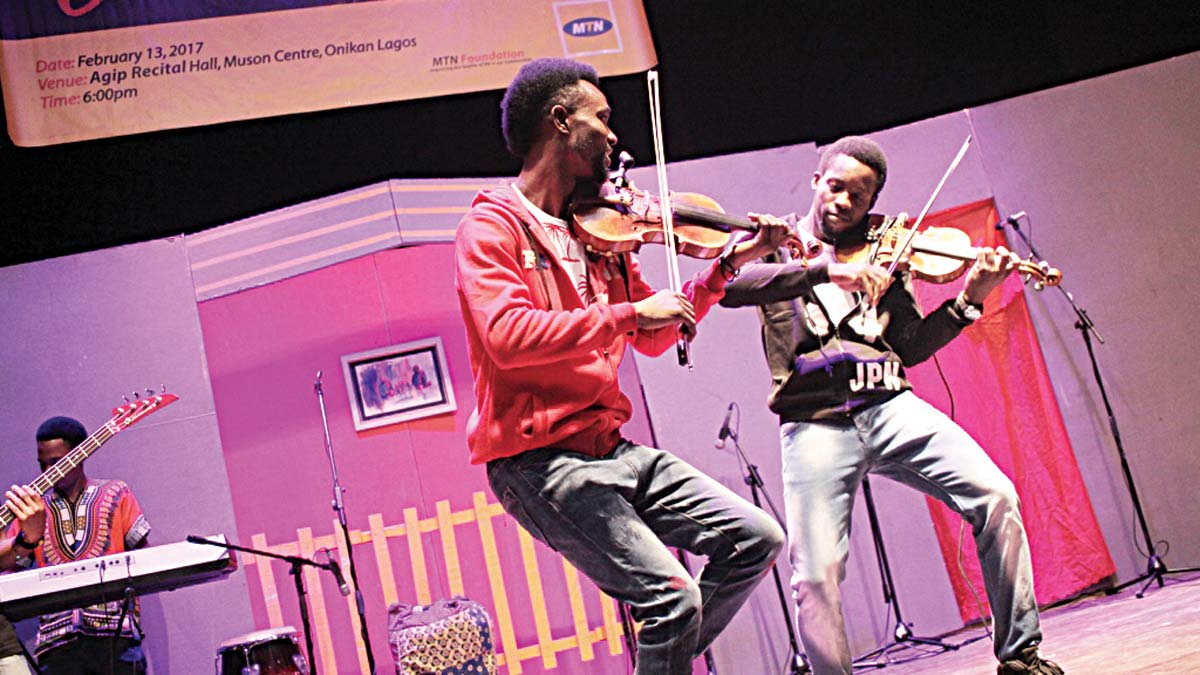 String Duo thirlling the audience with Love Yourself 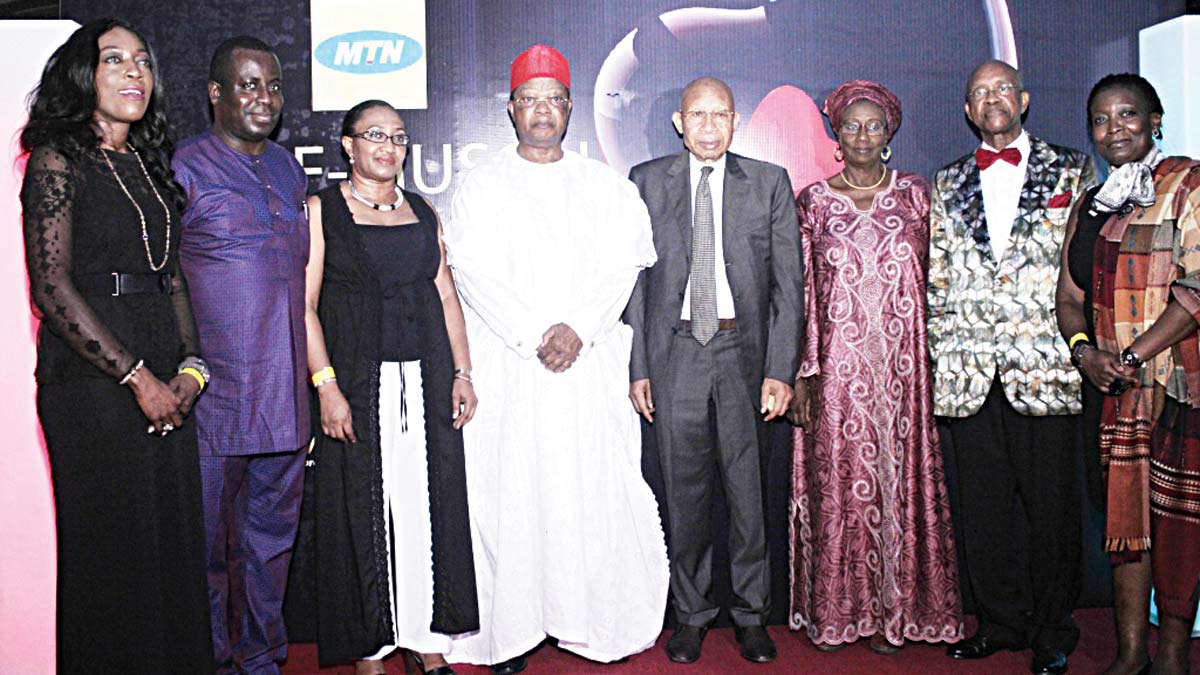 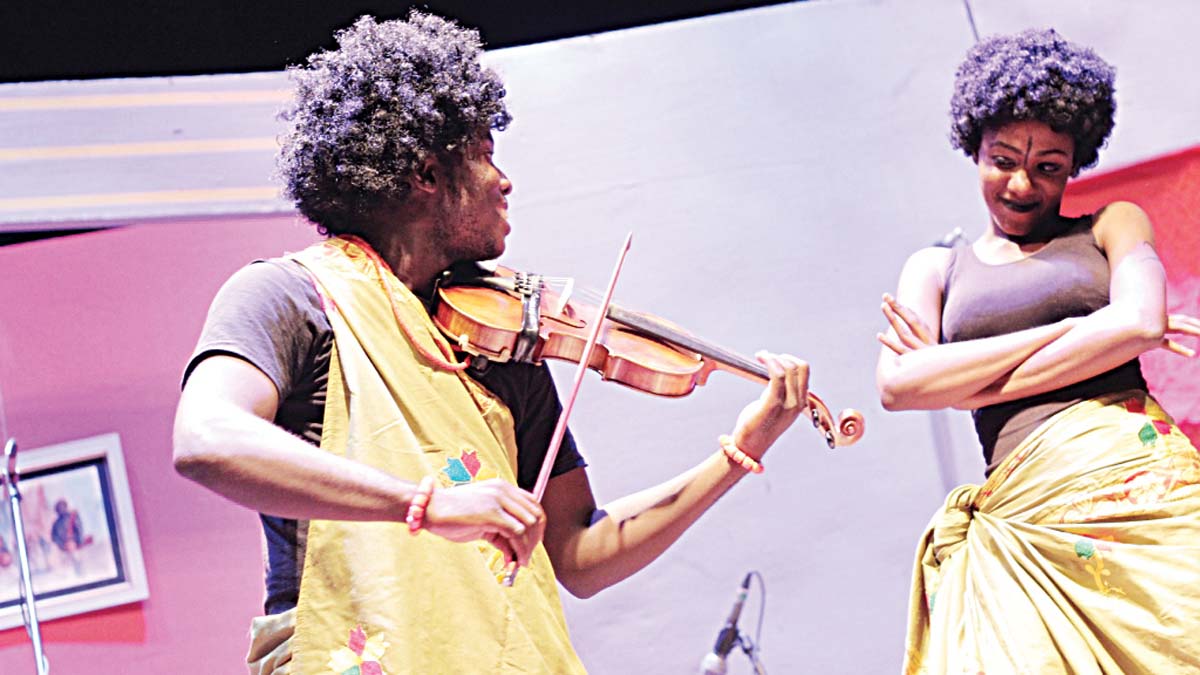 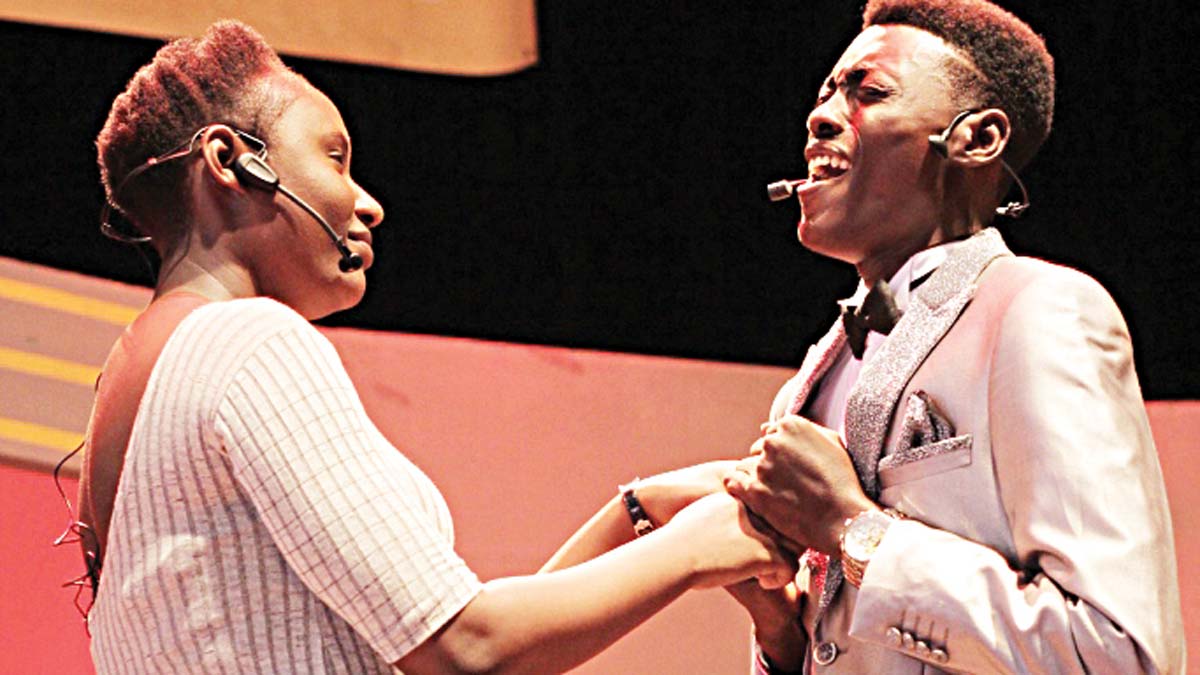 Miracle and Joshua performing Elephant Medley
From last weekend up till this week, the city of Lagos has been in festive mood, as different groups and individuals holds events in celebration of this year’s Valentine’s Day. From Victoria Island to Lekki, Ikoyi, Surulere, Ikeja, Festac Town and even the inner cities, series of shows and concerts were organised to mark lover’s day.

However, anyone who witnessed Love Notes, a valentine’s eve concert staged by the alumni of the Music Society of Nigeria (MUSON), in association with the MTN Foundation, will surely attest to the fact that it was clearly an alternative to what has become a monotonous Valentine’s Day gig in the city.

Held at the Agip Recital Hall of the MUSON Centre, Onikan, the evening started with a special red carpet and cocktail session for guests, with a DJ that belted out vintage tunes of yesteryears. It was such a nostalgic feeling for some guests, who couldn’t help but rock the beats.

While VIP guests such as the Chairman of MTN Nigeria, Dr. Pascal Dozie; Chairman, MTN Foundation, Prince Julius Adelusi-Adeluyi; former Special Adviser to late President Yar’Adua on Petroleum Maters, Prof. Emmanuel Egboga and others, were hosted at the beautiful MUSON Garden, others, including the artistes, had their session at the foyer of the Agip Recital Hall.

Setting the tone for the evening was the MUSON Band with Phantom of the Opera by Andrew Lloyd Webber, before paving way for Mmesoma Salome Ogbuani to perform Colours of the wind by Alan Menken. A graduate of Industrial Chemistry from the University of Lagos, Mmesoma, who is a recipient of the MTN Foundation scholarship to study music as a voice major, justified her emergence as best female singer, which earned her special award from MTN.

Waltz in D-Flat rented the air, as Fope Onalaja took charge of the piano to perform the song originally done by Fryderyk Chopin. For minutes, the pianist held the audience spellbound with his mastery of the instrument, before leaving the stage for Jennifer Becky Obaze (on violin) to perform her version of Runtown’s latest hit, Mad Over You. Full of confidence, you needed to see the young lady do justice to song with her violin. Even on high heels, she comfortably danced to the beat, beaming with smiles all through.

Introduced to music at a very tender age, Becky has had the opportunity to be tutored by some of the virtuoso violinists bot nationally and internationally. A graduate of the Music Diploma School of Music, her repertoire is wide ranging from classical to contemporary and other genres.

Saxophonist Segun was next on stage to perform one of George Benson’s classics, Nothing’s gonna change my love for you, a song that eventually put guests in the mood for love. Then came soprano singer Elizabeth Olaitan, who performed Love Never Dies by Andrew Lloyd Webber, before Debbiesoul came on stage to do Ileke, a song originally composed by Timothy Ogunbiyi.

Meanwhile, Francis Joshua’s performance of P- Square’s Ifunanya on violin was very dramatic. Backed by the MUSON Band, ConfamJossy as he’s fondly called, exhibited his creativity with the arrangement of the song, which tells the story of music and love. Members of the audience cheered in excitement, as Joshua, alongside his bread seller lover, interpreted the song on stage. From Ifunanya, he switched to another P-Squares track, Bank Alert to the admiration of guests.

From contemporary tunes, the concert switched back to classical, with Joshua David and Miracle Ogbor singing Libiamo from La Traviata, a Giuseppe Verdi’s composition. Though not in English, the chemistry between both artistes showed they were doing a love song. In what seems like a confirmation to that, the brilliant performance ended in a kiss.

After Webber’s Elephant Medley from the Moulin Rouge by Joshua David and Miracle Ogbor, which set the tone for the second part of the concert, Whitney Houston’s I’ll Always Love You rented the air. Performed by saxophonist Perpetua Atife, otherwise known as Perpie, the official saxophonist on set for the production of Wakaa, The Musical at the Shaw Theatre, London, got some members of the audience singing along.

A recipient of the MTN Foundation 2nd Choice Award for top graduating students in 2011 from the MUSON Diploma School of Music, and the Best Graduating Student in 2008 from the Adeniran Ogunsanya College of Education where she studied music and Education, Perpie is indeed a master of saxophone; she played with so must dexterity.

By the time Emmanuel and David of String Duo came on stage, the atmosphere became fully charged. Obviously one of the main attractions for the night, the violinists clearly demonstrated their mastery of the instrument; they must have been in this for years. From Justin Bieber’s Love Yourself to Dija’s Aww, String Duo was impressive in their performance and the audience applauded.

However, it seems the organisers saved the best for last; Imoleayo Band got the last slot to wrap up the evening of Love Notes. Led by saxophonist Imoleayo Balogun, the band did a special cover of Flavour’s Ada Ada, which they titled Sugar Baby.

Though the wireless microphone on Imoleayo’s saxophone kept failing, his session men filled up the gap with harmonious melodies. But as soon as Imoleayo switched to to the standing microphone, the music stabilized. Though not your smiling type, Imoleayo left no one in doubt of his creativity as an artiste and arranger.

A graduate of music from the University of Lagos and the MUSON School of Music, Imoleayo studied saxophone techniques with Peter King at the Peter King College of Music and Lt. (RTD) Abayomi Odujobi at the Musical Society of Nigeria.

In her remarks, the Executive Secretary of the MTN Foundation, Ms. Nonny Ugboma described the concert as a good justification for MTN Foundation’s investment in promoting music education and enhancing youth development, through its partnership with the MUSON School of Music.

“The Foundation has sponsored over 250 students in its 10 years of the MTNF-MUSON Music Scholars programmes. The beneficiaries now under the umbrella of MUSON alumni, have organised the Valentine’s Eve Concert in the past four years. What we saw here tonight is a demonstration of the quality inherent in this programme. So long as we can as a Foundation, we will always support the development of these talents across Nigeria.” Ugboma said.

No doubt, the MUSON Centre Lagos occupies a very important position in the country’s music industry. Situated conspicuously between the National Museum, the City Mall, the age-long Onikan Stadium and the former official residence of the Nigeria’s foremost Centre of artistic excellence, this serene establishment effuses the spirit of creativity, as well as the apparently eternal charm of love of those, who once sat in and walked through its grounds when it was known as ‘the Love Garden’ before the unveiling the centre’s facilities by Prince Charles in 1995.

However, the MUSON School of Music started in 1989 as an institution to train school aged children and members of the general public interested in learning to play a musical instrument and in voice and was granted permission from the Ministry of Education in 2002 to award Diplomas in Music. The requirements for entry into this course are similar to those for university entrance, with the addition of music theory and performance, which are assess in a rigorous interview and audition.

In recognition of the high standards of the students, MTN Foundation (MTNF) first granted each of them full tuition and book scholarships. In 2008, the Foundation expanded the scholarships by offering an increased amount to 30 students and added a 6-day travel allowance for each student. Today, the collaboration has provided a platform for young music talents to hone their skills, as well as have the opportunity to showcase their talents on a big stage.

The Valentine’s Eve Concert is an initiative of musicians, who graduated from the MUSON Diploma School of Music, through the MTN Foundation’s scholarship. Currently the largest conglomeration of trained musicians in Nigeria as at today, with about 250 members drawn from nine sets, the organisation aims at furthering the cause of healthy music in the society.

Aside for it’s entrainment value, the music project has provided a viable platform for the revival of classical music in Nigeria, which is most times erroneously, branded a genre for the old.

Nigeria
Nigeria must not fail with 2023 polls, UN scribe warns
1 hour ago
As Nigerians countdown to the presidential polls, which will hold in the next 25 days, the Deputy Secretary-General of the United Nations (UN) and Chair of the UN Sustainable Group, Ms Amina J. Mohammed, has warned that Nigeria cannot afford to fail with the 2023 general elections.
Nigeria
Despite extension, Nigerians can’t withdraw old, new notes
1 hour ago
Despite extension of deadline for the circulation of old N1,000, N500 and N200 notes to February 10, bank customers continue to face frustration, as ATMs were largely empty across the country.
Business News
FG may spend N4.65 trillion to service CBN overdraft this year
1 hour ago
Unless the Monetary Policy Committee (MPC) makes a U-turn on its aggressive monetary tightening, the Federal Government may pay as much as N4.65 trillion servicing its debt held by the Central Bank of Nigeria (CBN) this year.
Sport
Eaglets hopeful as group phase draw holds tomorrow
1 hour ago
The draw ceremony for this year’s Africa U-17 Cup of Nations will hold tomorrow at the Cercle Nationale d’Armee in Algiers, Algeria.
Nigeria
Ukraine/Russia war: AfDB okays $1.5b emergency food production facility for Africa, says Adesina
1 hour ago
Targets 34 countries, 20 million farmers The African Development Bank (AfDB) said it has put in place a $1.5b emergency food production facility to support food sufficiency in Africa. The President, Dr. Akinwumi Adesina, stated this in an interview at the Governor’s Office, Oke Mosan, Abeokuta, when he paid a visit to the Ogun State…

Interview
‘With Oligo synthesiser, technology will bring relief to medical practice’
17 Aug 2021
The NIMR was the first institute of medical research in Nigeria created in 1920 as the centre for production of yellow fever vaccine before it metamorphosed into the present day NIMR....

Telecoms
MTN tasks states on broadband access, to invest N600b till 2024
25 Aug 2021
Telecommunications firm, MTN has promised to invest N600 billion in the sector over the next three years. MTN however, appealed to state governments to ensured that broadband access expands to underserved and unserved areas.

Telecoms
MTN’s role in 20 years of Nigeria’s telecoms revolution
6 Oct 2021
Telecommunications firm, MTN, recently celebrated 20 years of service in Nigeria. In this report, ADEYEMI ADEPETUN, writes on the journey and contributions of the firm in the country.

Weekend Beats
MTN backs MUSON donors’ concert
25 Dec 2021
The MTN Foundation, since 2016, has been a major contributor to the Music Society of Nigeria (MUSON) School of Music, through the MTN/MUSON Scholars Program Scholarship.