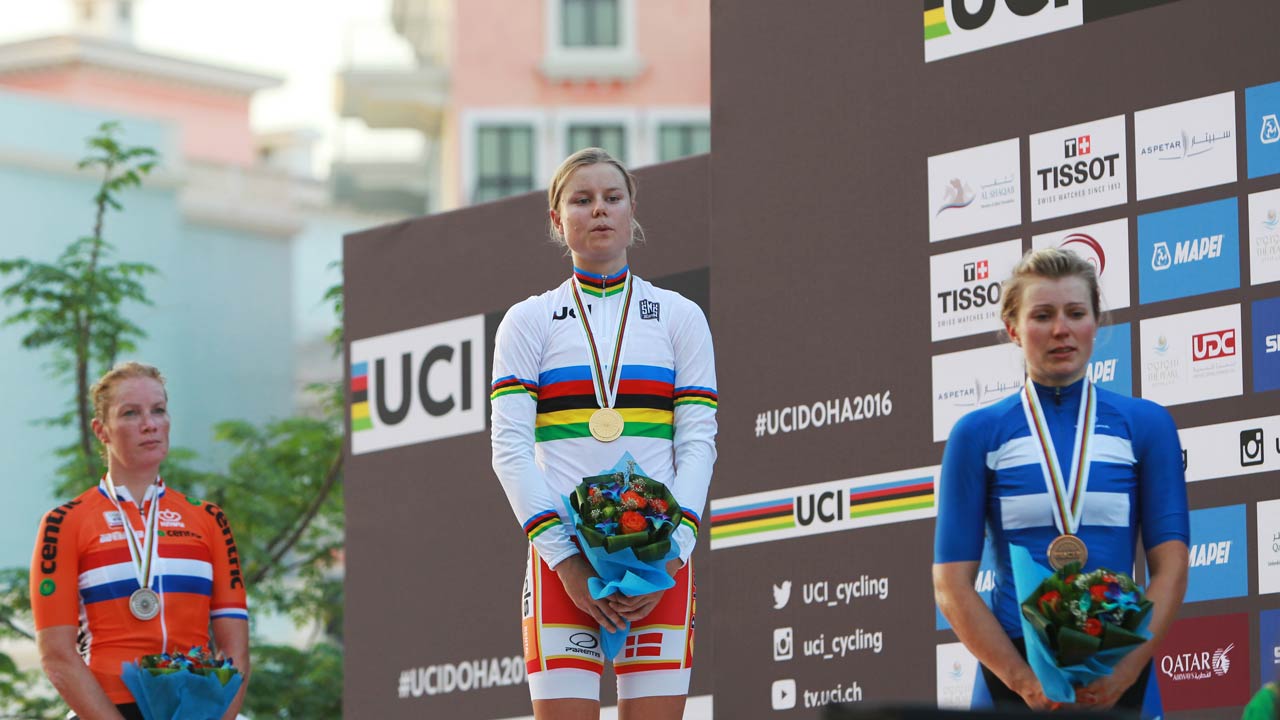 (From L to R) The Netherlands' silver medallist Kirsten Wild, Denmark's gold medallist Amalie Dideriksen and Finland's bronze medallist Lotta Lepisto stand on the podium at the end of the women's elite road race event as part of the 2016 UCI Road World Championships on October 15, 2016, in the Qatari capital Doha. KHALED DESOUKI / AFP 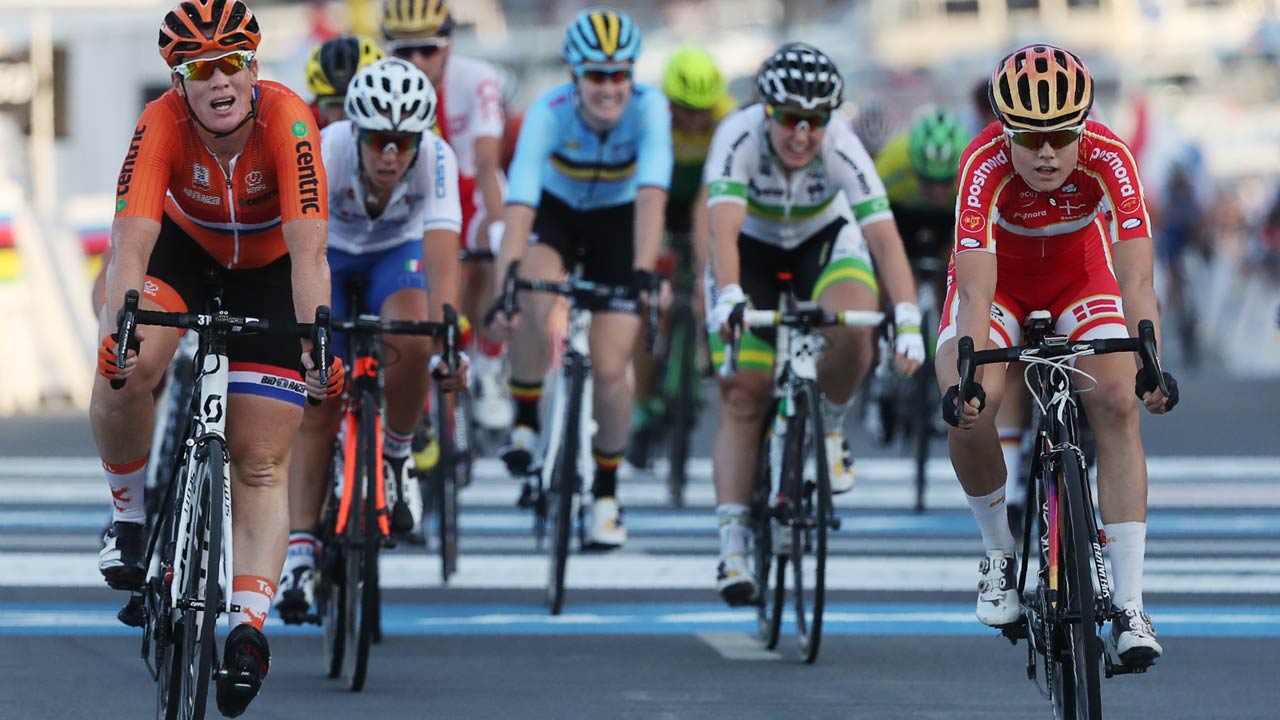 Denmark’s Amalie Dideriksen was the shock winner of the women’s road race event at the world championships in Qatar on Saturday.

The 20-year-old stunned one of the pre-race favourites, Kirsten Wild, on the finishing line timing her sprint to perfection to take the coveted rainbow jersey.

“I think it is a surprise for everybody,” said Dideriksen immediately afterwards.

“I know I am OK in the sprint, but taking the world championship is unbelievable.”

She added: “Of course, I go into every race expecting the best result but to be able to take gold, it’s a dream come true, but I didn’t expect it.”

The tight finish looked set to deliver gold for Wild after sterling work by her Dutch teammates set her up for a potential title-winning finish 300m from the line.

The strong Dutch team had dominated the later stages of the race and it seemed like the eventual winner would come from their ranks before Dideriksen’s last minute intervention.

Wild, a four-time winner of the Ladies Tour of Qatar, admitted she was unhappy to have come second on a flat course with such a strong team ride.

“It feels like a losing gold,” she said of her silver medal.

“It’s a bit disappointing. We had a really good strong ride with the team so I can’t blame anything but myself.

“This course was like Holland, only the fields in Holland are green here they are yellow and the cows are camels.”

Wild had a minor crash in the earlier stages of the race but admitted that had no impact on her final position.

Before the sprint finish it looked as if America’s Amber Neben was on course for a rare double.

She had already taken gold in the individual time trial earlier this week and the 41-year-old made an almost decisive breakaway carving out a lead of almost a minute in the closing stages.

But the peloton reeled her in on the final lap of seven at the Pearl Qatar — where the race finished — to ensure a sprint finish.

Prior to that Japan’s Eri Yonamine had set the early pace.

The world championships draw to a close on Sunday when the men compete in the road race with Britain’s Mark Cavendish a favourite to take his second world title following his first success in Copenhagen in 2011.

News
itel awarded most Innovative tech brand of the year 2022 by Titans of Tech Awards
1 day ago
itel, the global leading smart life brand committed to providing affordable and good quality consumer electronic products boasting excellent user experience...
What's New
Pete Davidson Allegedly Sought Out Trauma Therapy Over Kanye's Social Media Posts
1 day ago
Pete Davidson has allegedly sought therapy over Kanye West's social media posts. This revelation was made to People Magazine by a source close to the SNL comedian. The source revealed that since April this year, Davidson "has been in trauma therapy in large part" due to threatening posts that West, posted numerous times on social…
Guardian Life
How To Properly Store Nuts
1 day ago
Compared to other foods, nuts have a longer shelf life.  So, to protect the freshness and taste of your nuts, you must store these heart-healthy snacks correctly. Because improper storage can cause them to become rancid, and once they do, there's no going back.  These tips would help you store your nuts properly, increasing…
Nigeria
Insecurity: FCTA arrests 5 suspects with illegal drugs under flyovers
1 day ago
The Federal Capital Territory Administration (FCTA) on Tuesday arrested five suspected criminals selling and taking illegal drugs under the flyover in Wuse, Abuja.
Nigeria
2023: INEC denies recognising Lawan, Akpabio as senatorial candidates
1 day ago
Independent National Electoral Commission, has denied recognising Senate President, Ahmad Lawan, and former Akwa Ibom State governor, Godswill Akpabio as candidates in the 2023 general elections. The commission's denial came following a report from an online medium alleging that the commission succumbed to pressure from the ruling All Progressives Congress (APC), to doctor and backdate…

APO Press Releases
President of the Algerian National Assembly Meets with the Ambassador of the State of Qatar
23 Dec 2021
HE Mr. Ibrahim Bougali, president of the National Assembly of the sisterly People's Democratic Republic of Algeria, met with HE Mr. Abdelaziz Ali Neama, Ambassador of the State of Qatar to Algeria. During the meeting, bilateral cooperation relations between the two countries were reviewed.Distributed by APO Group on behalf of Ministry of Foreign Affairs of…

APO Press Releases
The Road to an Inclusive Economic Recovery: UN Women Rwanda facilitates a stakeholders' dialogue on leveraging AfCFTA opportunities for women entrepreneurs
23 Dec 2021
The establishment of the Africa Continental Free Trade Area (AfCFTA) is a tremendous milestone in the pursuit of integrated and inclusive economic growth in Africa. It holds a promise to enlarge the playing field for Small and Medium Enterprises especially those that are led by women. In the efforts to build back better the economic…
APO Press Releases
International Partners Welcome Planned National Consultative Council Meeting
23 Dec 2021
Download logoSomalia’s international partners* welcome plans to hold an in-person National Consultative Council meeting focused on improving and expediting the electoral process. We reiterate our call for full transparency in all related processes. We remain fully supportive of any process that is based on and respects the 17 September 2020 and 27 May 2021 agreements. We urge…