By APO Group
Share on Facebook Share on Twitter Share on WhatsApp Share on Telegram
On December 1, Deputy Chief of Mission Joel Maybury and USAID Health Office Director Jessica Healey joined the Super Morning Show on LBS Radio to discuss the ongoing 16 Days of Activism Against Gender-based Violence campaign and World AIDS Day.  They join the diplomatic community, the Government of Liberia, and civil society organizations in observing the 16 Days campaign… 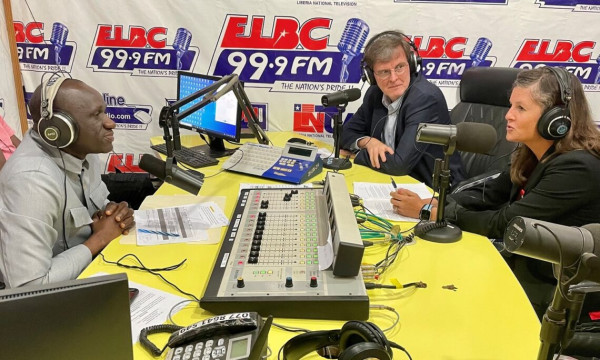 On December 1, Deputy Chief of Mission Joel Maybury and USAID Health Office Director Jessica Healey joined the Super Morning Show on LBS Radio to discuss the ongoing 16 Days of Activism Against Gender-based Violence campaign and World AIDS Day.  They join the diplomatic community, the Government of Liberia, and civil society organizations in observing the 16 Days campaign and calling for an end to gender-based violence (GBV).

President Biden and Secretary of State Antony Blinken have clearly stated that achieving and protecting human rights for all remains a top goal for the United States.  Preventing and responding to GBV is a human rights imperative and one that we are committed to championing.

Even before the COVID-19 pandemic, GBV impeded women and girls’ free and full participation in society.  The pandemic has only exacerbated existing gender inequities, including increasing women’s economic insecurity; decreasing access to education and safe spaces for girls; and growing risk to all forms of GBV, particularly intimate partner violence, female genital mutilation/cutting, homophobic and transphobic violence, and child, early, and forced marriage.

In Liberia, promoting gender equity and equality is part of everything we do, including but certainly not limited to supporting women entrepreneurs, working with women to fully participate in the electoral cycle, promoting female recruitment and support in the security sector, investing heavily in education for girls, ensuring gender parity of reporters at press events, and contributing tens of millions of dollars to strengthening health systems in order for Liberian women and girls to lead healthy, productive, and fulfilling lives.

Deputy Chief of Mission Maybury, speaking to host Sorbor George, said that “Everyone deserves to live a life free from violence and achieve their full potential. Gender-based violence undermines the human rights and fundamental freedoms of far too many people in far too many places.  By supporting women and girls, Liberia will see amazing benefits, including in economic well-being, health, and security.”

USAID Health Office Director Healey spoke about how the United States, through the President’s Emergency Program for AIDS Relief (PEPFAR), is assisting Liberia in achieving sustained epidemic control of HIV by supporting equitable health services, strengthening the national health system and capabilities, and through our enduring collaboration with the Ministry of Health and civil society organizations.

The PEPFAR-Liberia country program is led by USAID, the U.S. Department of Defense, and our Health Resources and Services Administration office.  The U.S. Government plans on spending US$10 million dollars across all our agencies next year to address HIV and AIDS issues in Liberia.

In partnership with the Government of Liberia and the Global Fund, our aim is to achieve HIV epidemic control in Liberia by 2030.  This will necessitate equitable, person-centered services that respect the dignity and rights of all those who put their trust in us, particularly the most vulnerable.  Ending GBV is a crucial part of this process.  Together, we can address both these important issues and build a better future for Liberian women and men alike.

Distributed by APO Group on behalf of U.S. Embassy in Liberia.

AMA Press Releases
EUTELSAT KONNECT satellite selected by Intersat for Internet connectivity over Gambia, Guinea Bissau and Senegal 
8 mins ago
• Multi-year deal representing several hundred Mbps • Showcasing yet again satellite as a robust and cost-effective infrastructure to bridge the digital divide  PARIS, France, 26 January 2022 -/African Media Agency(AMA)/- Eutelsat Communications (Euronext Paris: ETL) and Intersat, one of Africa’s leading providers of Internet solutions, have signed a multi-year deal representing several hundred Mbps to…
APO Press Releases
T?KA Supports Fishing in Kenya
8 mins ago
Download logoThe Turkish Cooperation and Coordination Agency (TÄ°KA) carried out the project "Developing the Fishing Industry through providing of Outboard Boat Engines for Fishing Boats" in Lamu County of Kenya, which consists of many islands along the Indian Ocean, and where fishing is one of the main sources of income for the people of the region.…
APO Press Releases
His Highness Sheikh Mohamed bin Zayed, Egyptian President discuss relations, regional developments
8 mins ago
Download logoHis Highness Sheikh Mohamed bin Zayed Al Nahyan, Crown Prince of Abu Dhabi and Deputy Supreme Commander of the UAE Armed Forces, and Abdel Fattah el-Sisi, President of Egypt, today discussed the long-standing relations between the UAE and Egypt, and the prospects of further advancing cooperation on issues of mutual concern. Their discussions took…
APO Press Releases
President Kenyatta Signs Political Parties Bill Into Law
8 mins ago
Download logoPresident Uhuru Kenyatta today at State House, Nairobi signed the recently enacted Political Parties (Amendment) Bill of 2021 into law. The parliamentary bill was approved by the National Assembly over the Christmas and New Year festive period before being referred to the Senate where it was passed yesterday. The new law amends the Political…