Marking the End of An Era: OPEC Secretary General Barkindo Served with Distinction (By NJ Ayuk) 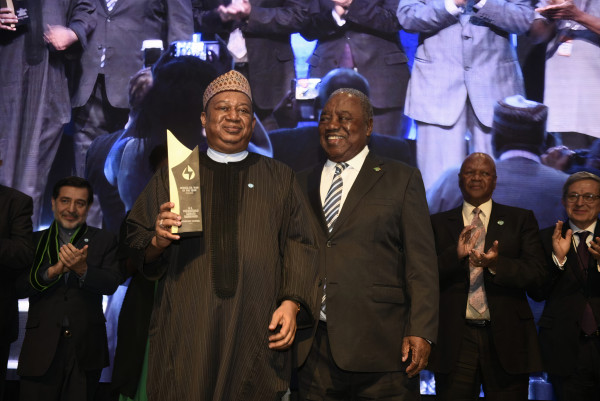 Many will agree OPEC Secretary General H.E. Mohammed Barkindo walks in the same shoes as late world leaders Kofi Annan, who served as Secretary General of the United Nations, and Dr. Rilwanu Lukman, a former Nigerian Minister and OPEC Secretary General who has been described as one of the oil industry’s most influential and respected ambassadors. Barkindo, throughout his tenure with OPEC, has fought the good fight, finished his race, and kept the faith. After six years of what can best be described as remarkable leadership, he will turn over the reins to his successor, Kuwaiti Haitham al-Ghais, this July.

We knew the day was coming. After all, the position is term-limited, and no one can lead the group forever. Barkindo has always been against staying a day longer than his term.

Yet the industry has become accustomed to Mr. Barkindo’s steady hand on the rudder, guiding OPEC through the volatile waters that global oil and gas producers must navigate, including growing public sentiment against fossil fuels.

If he had just maintained order during his term, that would have been enough, especially given the upheaval brought on by the pandemic. But Barkindo is not one to be satisfied with the status quo, even during the most trying times.

Granted, he could never have anticipated the global grip of COVID-19. But he did have the foresight to imagine how much impact OPEC could have through cooperation on an even more global scale — and that proved key to stabilizing the market when demand hit record lows.

Barkindo cultivated a very respectful relationship with oil-producing nations within and outside of OPEC, including Iran, Iraq, Saudi Arabia, Venezuela, China, and Russia, as well as U.S. shale producers. His talent for building bridges was just what OPEC, and producers worldwide, needed. In 2017 Barkindo steered OPEC into a mutually advantageous relationship with 11 non-OPEC producers (10 nations since Equatorial Guinea joined OPEC in May 2017), including Russia. The benefits of the OPEC+ alliance were keenly apparent in 2020 when the pandemic hit and travel nearly stopped in its tracks. It didn’t help that an oil war between Saudi Arabia and Russia flared up in March of that year, driving up production when demand was at a dramatic low. By April, oil futures plunged, at least for one day, into negative territory, and the oil industry was in jeopardy. It was Mr. Barkindo who skillfully brought all parties to the table to find a resolution: The 23 members of OPEC and OPEC+ agreed to record reductions in output, a move that helped oil prices recover more quickly than they might have otherwise. This outcome is a testament to Barkindo’s skills as a leader, though, of course, President Trump took credit for resolving the crisis. OPEC’s Secretary General knew that the longer the price war continued, the more economic harm would be inflicted on Africa and many poor people around the globe.

A Champion for Africa

As OPEC chief, Barkindo has a duty to be impartial. Yet it is no surprise that during his tenure, the number of member countries from Africa has increased. Barkindo’s homeland of Nigeria joined OPEC 50 years ago. In his own words, the nation “played a major role in driving the organization’s focus on cooperation, goodwill, a sense of belonging and unity, and in working towards achieving oil market stability, conscious of the benefits this brings to both producers and consumers.” Since then, that sense of belonging and unity has been extended to Gabon, Equatorial Guinea, and Congo. Today, those countries have a seat at the table, so to speak, a greater say in how their petroleum resources are used to benefit their people and grow their economies.

Recognizing his support of the continent’s energy industry, in 2018 the Africa Oil & Power Conference named Barkindo their Africa Oil Man of the Year. His leadership proved that “if you want to go far, you go together,” Gabriel Mbaga Obiang Lima, Minister of Mines and Hydrocarbons of Equatorial Guinea said at the time.

“He has been an enormous champion of African countries and giving them a voice to help stabilize oil markets,” Obiang Lima added.

Barkindo also has been an advocate for Africa in the greater energy transition discussion. Having led Nigeria’s technical delegation to the UN climate change negotiations for 30 years and serving three times as vice president of the Conference of the Parties — COP13 (Bali, Indonesia), COP14 (Poznan, Poland), and COP15 (Copenhagen, Denmark )— he is realistic about the way forward. It is his firmly held belief that a world eager to meet the challenges of climate change must also accept that it will take all sources of energy to meet current and future demand, especially given that energy poverty remains a reality across great swaths of the continent.

Barkindo never shied away from visiting leaders around the world and making the case for abundant, cheap, reliable energy. Nor did he shy away from tough conversations. I remember him going against the advice of his advisors to have a civil discussion with a climate-change activist who insisted on protesting OPEC in Vienna. You could hear a pin drop as he talked about energy poverty and his own experience growing up poor in Nigeria. His eloquence, transparency, and respectful approach gave many of us chills. He urged young demonstrators to hold fast to the idea of making the world a better place and welcomed them to be part of the solution to global solutions.

During the last year, Barkindo has been a particularly outspoken opponent of the current movement to restrict investment in hydrocarbons. Unless there is more spending on new oil and gas development, he has warned, the world should prepare for energy shortages and rising prices. Shortly after the COP26 summit in Glasgow, Mr. Barkindo said oil and gas had been unfairly targeted at the event as unsuitable for the energy transition, a claim that is blatantly false. The global gas shortage that occurred in fall 2021 — when European countries grew increasingly reliant on burning coal in its place — should have been a worldwide “wake-up call,” he said, that investment across the oil and gas industry is required.

During a visit to Congo Brazzaville, Minister of Petroleum Bruno Jean Richard Itoua and the current OPEC president described Barkindo as a true son of Africa, a man with a love for the continent who embraced Congo without reservations. There are so many stories that it would require a book to cover everything Mr. Barkindo does when it comes to encouraging investors to look at Africa and urging Africans to create an enabling environment to do business. I can tell you this: He does it with class.

He Served With Integrity

For many African businesses and countries, Barkindo has been a source of encouragement and inspiration: He expanded their belief that success is possible. He lifted their sights and encouraged them to serve with integrity and maturity.

In turn, leading OPEC has been a positive, life-changing experience for Barkindo. He has made amazing friends that he calls family, and I believe if you ask him quietly if he would do it again, the answer would be yes. He will still tell you, “I am proud of OPEC and I am a proud Nigerian and Africa is my home.”

Although Barkindo has not said publicly what his plans are after Mr. al-Ghais succeeds him, his legacy is secure. A veteran of Nigeria’s energy industry, equal parts businessman and diplomat, and a humble person of unerring faith, his wisdom, strength, counsel, and direction are greatly appreciated and will be sorely missed at OPEC. But, knowing Barkindo, he would be quick to ask us to be patient with him; he’d point out that God is not finished with him yet.

APO Press Releases
Government of Rwanda unveils 3 former African Heads of State as patrons for the upcoming inaugural Africa Protected Areas Congress (APAC)
2 hours ago
The Government of Rwanda through its Ministry of Environment, this morning unveiled three former African Heads of State as patrons for the upcoming inaugural IUCN Africa Protected Areas Congress (APAC). The three former heads of state include H.E Hailemariam Desalegn – former Prime Minister for Ethiopia; H.E Issoufou Mahamadou – former President Niger and H.E…
APO Press Releases
Minister Ganoo chairs sensitisation session on Industrial Property Act 2019
2 hours ago
Download logoThe Minister of Land Transport and Light Rail, Minister of Foreign Affairs, Regional Integration and International Trade, Mr Alan Ganoo, chaired, this afternoon in Port Louis, a sensitisation session for private sector institutions on the Industrial Property Act 2019. The aim of this session was to share with representatives of private institutions the main…
APO Press Releases
University of Mauritius signs MoU with Construction Industry Development Board and Land Drainage Authority
2 hours ago
Download logoThe University of Mauritius (UoM) joined hands today with the Construction Industry Development Board (CIDB) and the Land Drainage Authority (LDA), both operating under the aegis of the Ministry of National Infrastructure and Community Development, through the signature of two Memoranda of Understanding, this afternoon, in Port Louis, with a view to develop and…
APO Press Releases
Daily Noon Briefing Highlights: Ethiopia, Tonga
2 hours ago
Download logoEthiopia The UN and its non-governmental organization partners are having to reduce, postpone or cancel critical distributions of assistance, including food, medicine, and nutrition interventions in Tigray. This is because the transport of humanitarian supplies into Tigray, via the Semera-Abala-Mekelle corridor, remains suspended since 14 December, 2021 due to ongoing fighting in Abala, in…
APO Press Releases
Minister on spot over transfer of Environmental Fund
2 hours ago
Download logoMembers of Parliament on the Natural Resources Committee have criticised the Minister of Finance, Planning and Economic Development, Hon Matia Kasaija for diverting the Environmental Fund from National Environmental Management Authority (NEMA) to the Consolidated Fund, saying this has crippled NEMA’s operations. MPs said the fund was lawfully established to assist NEMA restore the…