By APO Group
Share on Facebook Share on Twitter Share on WhatsApp Share on Telegram
On arrival in Mogadishu to serve, 28 personnel of the United Nations Guard Unit (UNGU) underwent a five-day induction training, which was held with the support of the United Nations Support Office in Somalia (UNSOS). The 28 personnel from the Uganda Peoples Defense Forces (UPDF) were trained on the UNSOS and UNSOM mandate, the Somali… 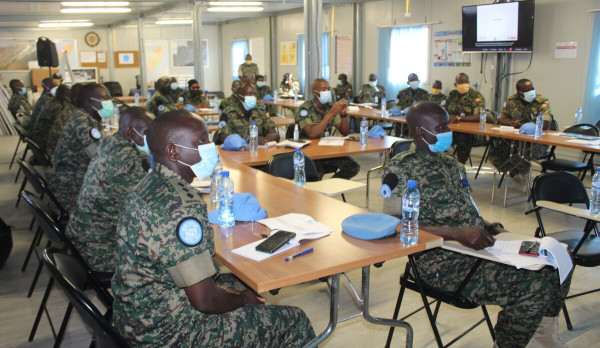 Other topics covered at the training included HIV/AIDS in the workplace, UN use of force guidelines and the UN firefighting system.

UNSOS Chief Training Officer, Mr. Patrick Duah, said the tailored training is provided to all new arrivals to prepare them for the task and responsibilities ahead.

“The training serves as an introductory program focusing on the mission’s goals and mandate, as well as sensitizing on issues of importance to the mission and the United Nations,” said Mr. Duah.

Speaking during the opening day of the training, the Principal Security Advisor (PSA a.i), United Nations Security, Mr. Michael Lynch, underlined the significance of the guard unit to the security of personnel and to the operations of UN missions in Somalia.

“Without you (the guard unit), we cannot be here ourselves. It is that simple. To perform their duties, UNSOM and UNSOS require a fully effective and dedicated guard unit, ” said Mr. Lynch.

“There is nothing more significant to us than that, as far as we are concerned,” he added.

The training model was hybrid, with some of the participants joining virtually.

UNSOS Gender Advisor, Ms. Judith Mirembe, urged participants to be gender-sensitive, and called for everyone to be responsible and accountable to themselves and others.

“We need to ensure accountability of institutions and appropriately address the grievances of both men and women, while at the same time laying the foundation for sustainable peace and reconstruction,” said Ms. Mirembe.

Dr. Omar Abdulle Alasow, Senior International Humanitarian Law and Human Rights Law adviser to AMISOM, introduced International Humanitarian Law (IHL) principles and rules applicable to the situation in Somalia and highlighted the importance of compliance with IHL obligations in armed conflicts. “You are bound by specific IHL principles and rules and are expected to apply the highest standard in relation to the application of IHL,” said Dr. Alasow.

The UN Guard Unit plays a crucial role in the United Nations’ efforts to help bring peace and stability to Somalia. UNGU personnel protect UN staff and UN facilities and installations in Somalia, including protecting UN compounds in Mogadishu to enable UN staff to carry out their mandate.

“I appreciate the facilitators for highlighting matters of gender and calling on us to be gender sensitive as we carry out our duties,” said Lt. Nakiranda.

She then said the training had challenged them to “to adhere to the knowledge we got during the induction. If we do so, our mission will be successful.”

“I look forward to practising what we learnt, and to continue learning through practical work and sharing experiences with others,” said Capt. Kazinduki.

Guardian Life
8 Reasons You Should Be Eating More Kale
9 mins ago
Kale is a popular vegetable that is known for being rich in nutrients. As a powerhouse of nutrition, kale has come to be popularly known as the “queen of greens”.  This popular vegetable belongs to the cabbage family. Kale is categorised as a cruciferous vegetable like cabbage, broccoli, cauliflower, and Brussels sprouts. Kale comes in…
Nigeria
US authorities jail Nigerian for fraud, orders deportation after jail-term
27 mins ago
A United State court on Monday sentenced a Nigerian man Jude Uzochukwu Ifeanyi to over three years jail term for wired fraud. Ifeanyi was sentenced in federal court in Omaha, Nebraska, the United States Attorney Jan Sharp said in a statement by the United States Department of Justice (DoJ). "Senior United States District Judge Joseph…
World
IMF urges El Salvador to remove bitcoin as legal tender
30 mins ago
The IMF on Tuesday called on El Salvador to change course and stop using bitcoin as legal tender, citing "large risks" posed by the cryptocurrency. The small Central American nation in September became the first country in the world to embrace digital money, allowing consumers to use it in all transactions, alongside the US dollar.…
Nigeria
Nigeria to impose Twitter conditions on other social media platforms
36 mins ago
Nigeria is looking to impose the same conditions given to Twitter on all other social media platforms accessible in the country. Nigeria's information minister Lai Mohammed said the decision was borne out of the recent development on suspension of Twitter operations in the country and the agreement reached before the suspension was lifted. "Whatever applies…
Nigeria
Interpol bust cyber crime syndicates, arrests 12 suspects
1 hour ago
The INTERPOL Cybercrime Unit NCB Abuja has arrested 12 alleged members of a prolific Cybercrime network as part of a Nigeria Police Operation coordinated with the INTERPOL. The suspects were said to be members of ‘Silver Terrier’, a network known for business E-mail compromise (BEC) scams, which have defrauded thousands of companies globally. Their arrest…

Guardian Life
8 Reasons You Should Be Eating More Kale
9 mins ago
Kale is a popular vegetable that is known for being rich in nutrients. As a powerhouse of nutrition, kale has come to be popularly known as the “queen of greens”.  This popular vegetable belongs to the cabbage family. Kale is categorised as a cruciferous vegetable like cabbage, broccoli, cauliflower, and Brussels sprouts. Kale comes in…
APO Press Releases
President Buhari Wishes Nigerian Athletes Participating in Beijing 2022 Winter Olympics Success, Congratulates China
12 mins ago
Download logoOn behalf of all Nigerians, President Muhammadu Buhari wishes Nigerian athletes participating in the Beijing 2022 Olympic and Paralympic Winter Games success at the competition. President Buhari trusts that Nigerian athletes participating in different events will excel at the competition, surpassing the previous record in PyeongChang, South Korea, in 2018, when the nation competed…

APO Press Releases
UN mission calls for probe into deadly attack in South Sudan
12 mins ago
Authorities in South Sudan must investigate a report of deadly intercommunal violence in Jonglei State earlier this week, the UN mission in the country, UNMISS, said on Tuesday.  The attack reportedly occurred on Sunday when armed youth from the Murle community carried out cattle raids in two villages in Baidit, UNMISS said, citing various independent sources, including…

APO Press Releases
NBA Africa and Hennessy to Host League's First NBA Crossover Lifestyle Event on the Continent
12 mins ago
NBA Africa and Hennessy, the world’s best-selling cognac, today announced that NBA Crossover, an invite-only lifestyle event that will showcase the convergence of the NBA (www.NBA.com) and popular culture through the art, fashion, music and technology that surround today’s game, will take place in Africa for the first time on Saturday, Feb. 5 at Landmark…

APO Press Releases
Coronavirus - Zambia: COVID-19 Statistics Daily Status Update (26 January 2022)
12 mins ago
Today's 697 new cases were reported across 75 districts. How is your district doing? Southern prov recorded one death (MHSRIP) Vaccinated Dose 1: 5,897 Fully Vaccinated: 9,624 Booster Vaccinated: 535 Covid-19 Deaths: 1 Covid-19 Associated Deaths: 0 Total Active Cases: 5,666 Total Currently Admitted: 100 Community Management: 5,566 New Admissions: 20 On Oxygen: 41 Critical:…
APO Press Releases
"Unacceptable" detention of MSF medical team in Khartoum
13 mins ago
Download logoThe Sudanese authorities detained nine of our Doctors Without Borders (MSF) staff members in Khartoum on the evening of 24 January and released them the following morning.  At the time of their detention, our team was returning to the MSF office from the hospital where they had been working that day. The nine staff…