A Show Of Cultural Flamboyance At The AFCON 2022

By Tobi Awodipe
Share on Facebook Share on Twitter Share on WhatsApp Share on Telegram
The Africa Cup of Nations (AFCON) kicked off exactly a week ago on January 9 after a pandemic-related hiatus at the 60, 000 capacity Olembe stadium in Cameroon with spectacular festivities and the most amazing cultural performances from the West-Central African country. The tournament started in earnest after an opening by the Indomitable Lions of…

The Africa Cup of Nations (AFCON) kicked off exactly a week ago on January 9 after a pandemic-related hiatus at the 60, 000 capacity Olembe stadium in Cameroon with spectacular festivities and the most amazing cultural performances from the West-Central African country.

The tournament started in earnest after an opening by the Indomitable Lions of Cameroon and the Stallions of Burkina Faso, which the hosts won comfortably. With several commentaries from citizens and sports enthusiasts alike, every game has become a conversation starter.

But almost, if not even more obvious than the football matches being played, is the flamboyant display of the rich cultures of the different African nations. From East, West, South, North and Central Africa; fans and attendees who are in the host country have, to our absolute delight, showcased some of the best fashion and culture the world has seen. From the outset, the opening ceremony aimed to depict the rich cultural diversity of the country revealed the facets and symbols of Cameroonian culture while involving renowned international talents. The AFCON 2021 anthem was performed by Africa Smile and room was made for dance performances representing major Cameroonian cultural groups, Grassfields, Sawa, Fang-Beti and Sudano-Sahelian. 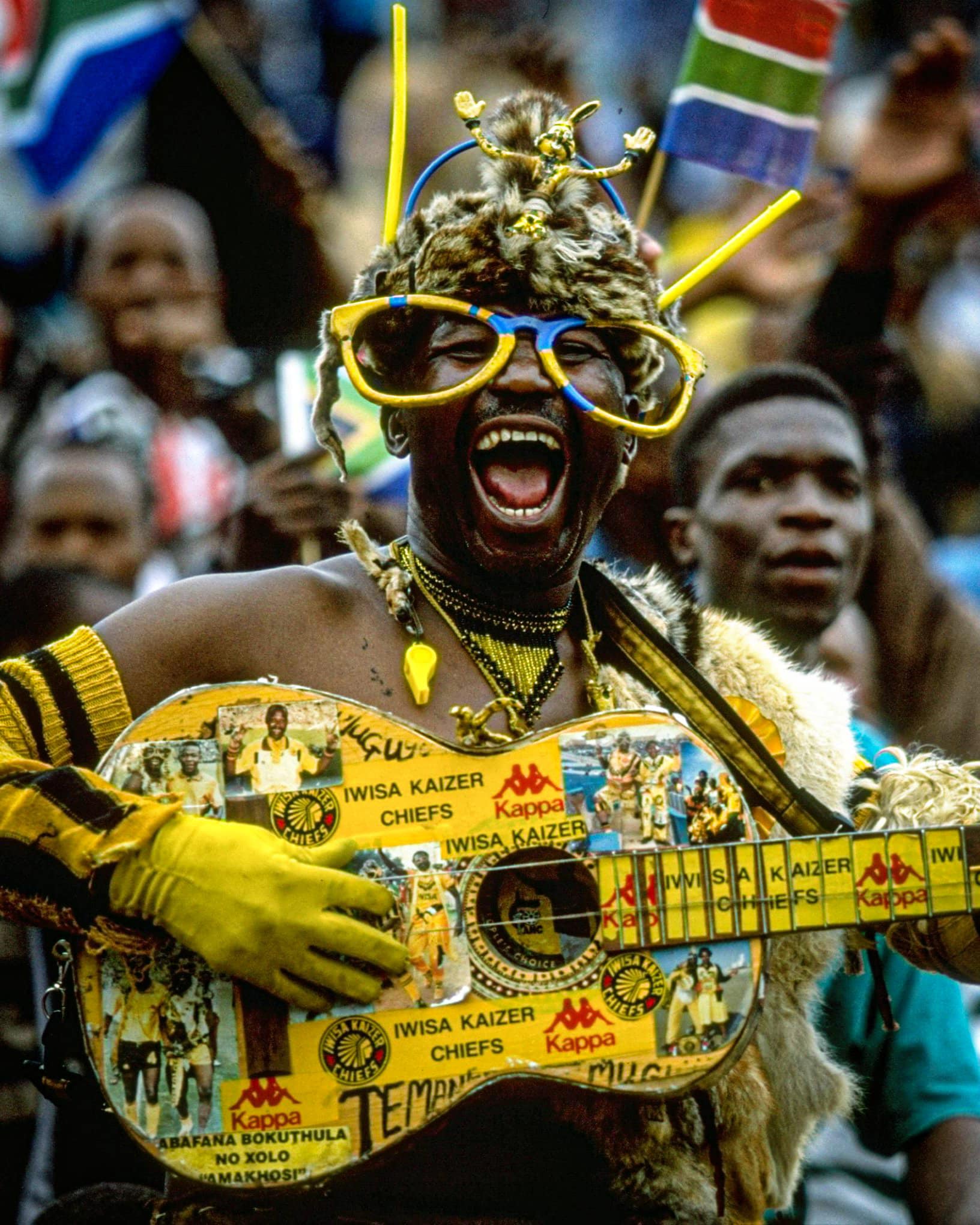 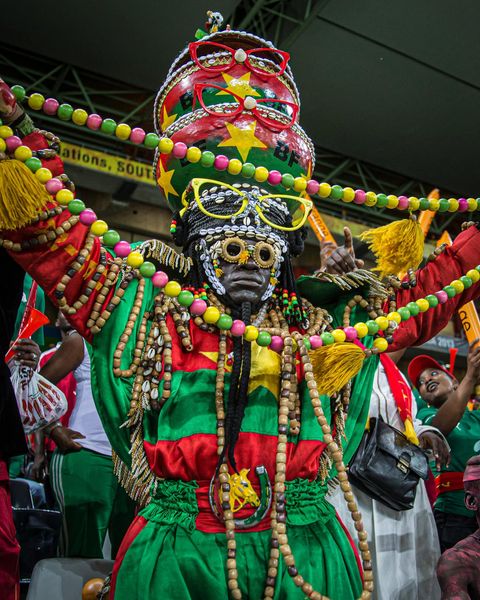 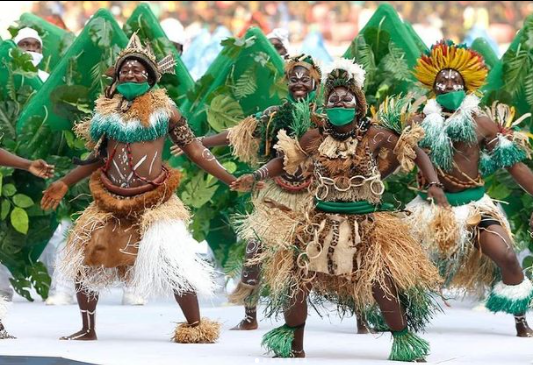 Headlining the musical show was Fally Ipupa, and the ceremony was presented in five acts, with the first dedicated to “the awakening of Cameroonian nature” through the richness and diversity of its landscapes. The second represented a mosaic of colours, while Act 3 celebrated Cameroon, the welcoming land. Acts 4 and 5 respectively evoked the celebration of the competition and the final concert. Leaving spectators spellbound, visitors have not been in short supply of some of Africa’s finest cultural displays, fashion as well as cultural heritage.

The 33rd edition of the pan-African tournament is seeing 24 different national teams competing in 52 matches for the coveted cup but even more fierce is the culture and fashion on display in the stadium stands and around viewing centres and fans strive to out-do one another in presenting the best displays. Dancers have been seen performing in different sectors according to the dress cultures of the country. Even the national ballet group wasn’t left out, thrilling fans and spectators to a wonderful musical display.

With a kaleidoscope of a million colours, intricate details on fabrics, body art and aesthetics on full display at each match, Africans and the rest of the world have been treated to the best of the best designs.

The opening ceremony featured traditional dances with colourful masquerades and traditional dancers sending fans into a frenzy, as well as fireworks and theatrical smoke and fog in the host country’s colours of red, green and yellow. The stadium was not left out as it was also done up in the same colours. In many communities, dance groups are present to show off the rich culture of the country, thrilling fans with scintillating dance steps throughout the game and especially when there is a goal.

Nigeria is not left out of the rich cultural display and flamboyance as the country’s fans have not disappointed so far, putting up a good show at the country’s opening match against Egypt which Nigeria won 1-0 to top her group. Nigerian fans were seen with dazzling green and white outfits, green and white mascots, hair-do, accessories and ornaments as they cheered the Super Eagles to victory. Known as the Supporters club, these fans have made their presence known during matches as they strive to not only celebrate the national team but show off the beauty and
elegance of Nigeria’s rich culture and beauty.

Culture
Appreciating The Historical Aesthetics Of Ile-ife To The Yorùbá Race
2 hours ago
Ifẹ̀ Oòdáyé, Ilẹ̀ òwúrọ̀. Ibi ojúmọ́ rere gbé ń mọ́ wáyé. (Translation) Ifẹ̀ Oòdáyé. The ancient land Where the breaking of the day began Between 1910 and 1912, Leo Viktor Frobenius (1873 –1938), a renowned ethnologist and archaeologist worked on archaeological sites in Nigeria. Ile-ife in Osun State was one of the sites that Frobenius…

On The Cover
Celebrating The Glory Of African Royal Youths
2 hours ago
About 4 years ago when the Royal Majesty, Oba Adeyeye Enitan Ogunwusi (Ojaja II), conceived the idea of creating an award to celebrate the African spirit, he envisioned an Africa where Africans would get the recognition that they deserved. For years, countries outside the shores of the continent celebrated Africans through awards such as the…
Style
Best And Worst Dressed At The AMVCA 2022
9 hours ago
This year’s AMVCA taught us that if you don’t have a good fashion designer or stylist to make you look like the belle of the ball, it’s best not to attend. The 8th edition of the Africa Magic Viewers Choice Awards had us glued to our phones, mostly to see what outfits our favourite celebrities…

Travel and Places
Cat Lover? Take A Trip To Cat Island In Japan
9 hours ago
If you are a cat lover or considering being a cat parent, then this is for you. On an island in Ehime Prefecture, Japan lies an island dominated by cats. As its description, the island, known as Cat Island or in its Japanese name, Aoshima, has a number of 36:1 of cats to man.  Take…

Music
Eltee Skhillz: I Had To Prove Myself, Despite Having Entertainers In My Family
1 day ago
I started professionally in 2009. I released my first song then titled Jekafo; Philkeyz produced it. Then, we were trying to get ourselves into the industry, but my mother was insistent that I attend school first.

Music
Lojay And Sarz Release 'Monalisa' Remix Featuring Chris Brown
2 days ago
Lagos-based Afro-fusion artist Lojay and internationally renowned super-producer Sarz release a brand-new remix of recent smash single Monalisa, featuring R&B superstar Chris Brown. Taken from their joint LV N ATTN EP last year, the original version of Monalisa became an early standout due to its hypnotic beat and infectious hooks, becoming not just one of the biggest releases in Nigeria, but a global hit that put Lojay on the map as…

Music
Everything We Know About The MI, Joey Akan Situation
3 days ago
Rapper MI Abaga and music journalist Joey Akan have entered into a battle of words following Da Baby's visit to Nigeria.  For more context, MI had revealed that he was denied access to Rick Ross during the rapper's visit to Nigeria via Twitter. His tweets came moments after Ycee called out organisers of the American…

Music
Chris Brown To Feature Wizkid On New Album 'Breezy'
3 days ago
Chris Brown has unveiled the details of his forthcoming album Breezy which includes a feature of Made In Lagos superstar Wizkid.  The artist shared the release date and cover art for his forthcoming Breezy album in a post on Instagram.    View this post on Instagram   A post shared by BREEZY (@chrisbrownofficial) The album's cover art is a black and…

Film
Trailer Of 'Money Heist' Korean Version Drops In Time For Release In June
2 days ago
The trailer of the Korean twist of the popular Netflix blockbuster La Casa De Papel 'Money Heist', has been released. It features a group of crooks, including Tokyo, an ex-soldier, band together under the direction of a mastermind known as the Professor to organize an unparalleled heist, taking money that has never been seen before.…

Film
Cast Of 'Stranger Things' Agree That Seasons Title Is Iconic
3 days ago
Stranger Things, the enormously popular Netflix series, is back for a fourth season. Gaten Matarazzo, Maya Hawke, Natalia Dyer, Sadie Sink, Joe Keery, Joseph Quinn, Caleb McLaughlin, and Priah Ferguson spoke in an interview about the show, and when the cast where asked to rename the series, suggestions where made but they agreed on one…

Film
Squid Game Creator Hints What To Expect In Season 2
4 days ago
Squid Game creator Hwang Dong-hyuk, has hinted that the show's second season maybe even more dramatic than its first.  The creator speaking to Variety revealed that the second season of the famed Korean series would question whether humanity can conquer all as a united front.  He said, "Humanity is going to be put to a test…

Film
'Bridgerton' Season 3 Will Focus On Penelope And Colin
17 May
Bridgerton lovers will watch the love story between Penelope Featherington and Colin Bridgerton unfold in the show's third season.  The new plot for season three takes a different turn from the book series. The book's third novel focuses on Benedict Bridgerton and the surprising love he finds. The film's new plot was confirmed by Penelope actress…

Sport
AFCON: Onuachu, Super Eagles' hero, as Nigeria leave it late against Benin
27 Mar 2021
Nigeria on Saturday defeated Benin in an Africa Cup of Nations qualifier played in Porto Novo, with a stoppage-time winner from second-half substitute Paul Onuachu sending Super Eagles fans into raptures and shattering Beninese hearts. In a game that wasn’t entirely played behind closed doors, as hundreds of Beninese fans, contrary to the rules stipulated…

Sport
Super Eagles mark Lagos homecoming with 3-0 drubbing of Lesotho
30 Mar 2021
The Super Eagles devoured the Crocodiles of Lesotho 3-0 in Lagos in their final AFCON 2022 qualifying match courtesy of goals by Victor Osimhen, Oghenekaro Etebo, and Paul Onuachu. Osimhen opened Nigeria’s goals account for the day in the 23rd minute before turning into the provider in the 50th minute for Etebo to make it…

Sport
COVID-19 test fraud dangerous for African football, say Omokaro, Udeze
2 Apr 2021
The penchant for some African countries to employ the COVID-19 pandemic to disorganise their opponents through fake test results is dangerous for the continent’s football...

Sport
Next Super Eagles coach – This Mumu must stop, now
27 Nov
The matter of Gernot Rohr, the German coach of Nigeria’s national football team, the Super Eagles, must have been finally rested. Most Nigerians are in an unwritten agreement that the man must just go.

Sport
Eagles, pawns in politics of Nigerian football
18 Dec
Politics across Nigerian football will dominate the sports landscape starting from AFCON 2022. Politics in the game and its administration have, indeed, become a recurring decimal...