Cynthia Morgan’s ex-manager from 2011-2016, Joy Tongo,  has told her to stop throwing stones while living in a glasshouse. A few hours after Cynthia Morgan blamed her career misfortune on Jude “Engees” Okoye of the defunct P-Square group, Tongo has urged her to stop crying wolf.

Cynthia Morgan had alleged that Jude Okoye seized her accounts, made her stop using her name as well as not promote her.

However, in a rather steaming revelation, Tongo accused of the singer of owing her over 30,000 dollars as well as Jude 40 million naira despite all their investment. She also advised her to “let people know the truth, else we would tell them the truth” instead of chasing clout. 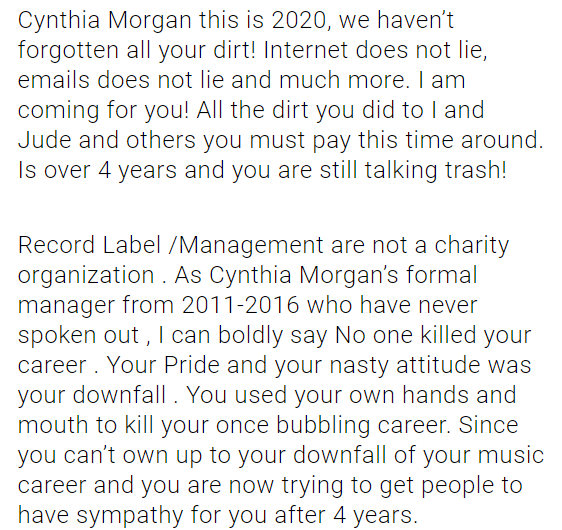 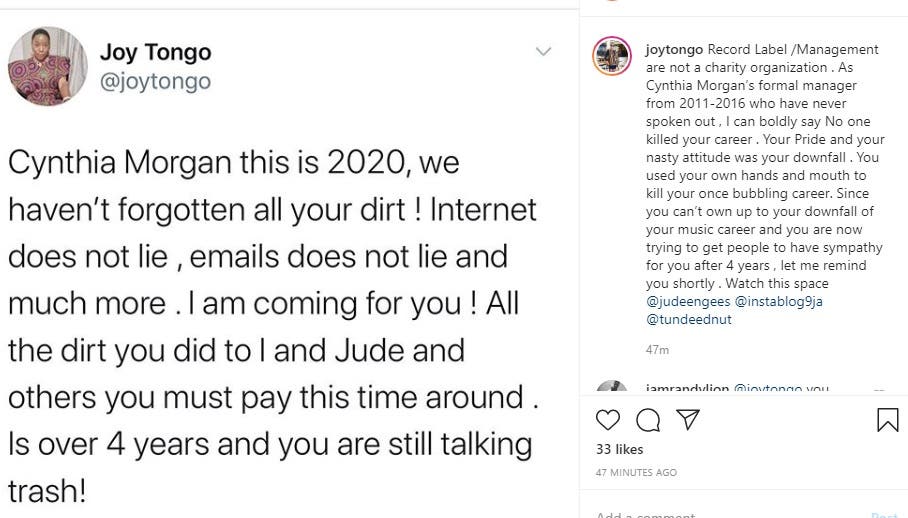 Recall that only a few hours ago, a gofundme account was set up to aid Cynthia Morgan to make a comeback to the industry.

In a more recent development, Cynthia Morgan’s producer Tony Ross’s “bestie” reached out to Joy Tongo to reaffirm what Tongo is alleging.

Barely a month ago, Cynthia Morgan explained that her reason for leaving the music industry was because she was sick and had to address some family issues.

Cynthia Morgan is not new to controversies.

In 2018, Morgan was charged to the Ikeja High Court for failure to pay her rent at her Omole apartment and for tax evasion to the tune ofN3.584 million on the same day.

Dagizah: Striking For The Top With Music
2

Dave Taps Wizkid, Stormzy For New Album "We're All Alone In This Together"

Music Dave Taps Wizkid, Stormzy For New Album "We're All Alone In This Together"
3 days ago 0