By Editor
Share on Facebook Share on Twitter Share on WhatsApp Share on Telegram
Film makes history as first Nigerian film on Criterion Collection Just as the film concluded its cinematic release in Nigeria, Janus Films has announced the acquisition of the Nigerian feature film EYIMOFE (This Is My Desire) for the North American market. Based on the agreement, which was sealed recently in the United States, the film…

Just as the film concluded its cinematic release in Nigeria, Janus Films has announced the acquisition of the Nigerian feature film EYIMOFE (This Is My Desire) for the North American market. Based on the agreement, which was sealed recently in the United States, the film will be released in theatres on July 23, followed by a streaming release on the Criterion Channel and home video release via the Criterion Collection.

Janus Films was founded in 1956 and was the first theatrical distribution company dedicated to bringing international art-house films to US audiences. It handles the rights in all media to an extensive library that includes the work of legendary Senegalese director Ousmane Sembene, Michelangelo Antonioni, Ingmar Bergman, Federico Fellini, Abbas Kiarostami and Akira Kurosawa.

Janus is beyond excited to be bringing Arie & Chuko Esiri's EYIMOFE (THIS IS MY DESIRE) to theaters this summer! 🎞️🇳🇬✨

The Criterion Collection is dedicated to gathering the greatest films from around the world and publishing them in DVD and Blu-ray editions of the highest technical quality. It includes important classic and contemporary films and serves film and media scholars, cinephiles, as well as public and academic libraries. The Criterion Collection is renowned and includes over 1,000 films.

Speaking on the acquisition, Criterion President and Janus partner Peter Becker said: “Arie and Chuko’s EYIMOFE (This is My Desire) does not feel like a debut film. At once a migration story told from the perspective of those longing to leave and a love letter to the filmmakers’ home city of Lagos, this incisive, beautifully shot, and deeply humanist work deftly evokes global issues of class, migration, and social stratification without ever straying from the intimate lives of the ordinary people at its heart. We couldn’t be more thrilled to bring this exciting new work to screens and audiences across the country.”

“This acquisition by Janus Films is exciting news from the incredible global journey that the film has had so far, and a proud moment for our film industry,” said Toke Alex Ibru, Executive Director of GDN Studios, adding, “We’re thrilled with this achievement and hope it inspires other Nigerian filmmakers, at home or abroad, to dream big, persevere and want to bring more of our stories to the world.” 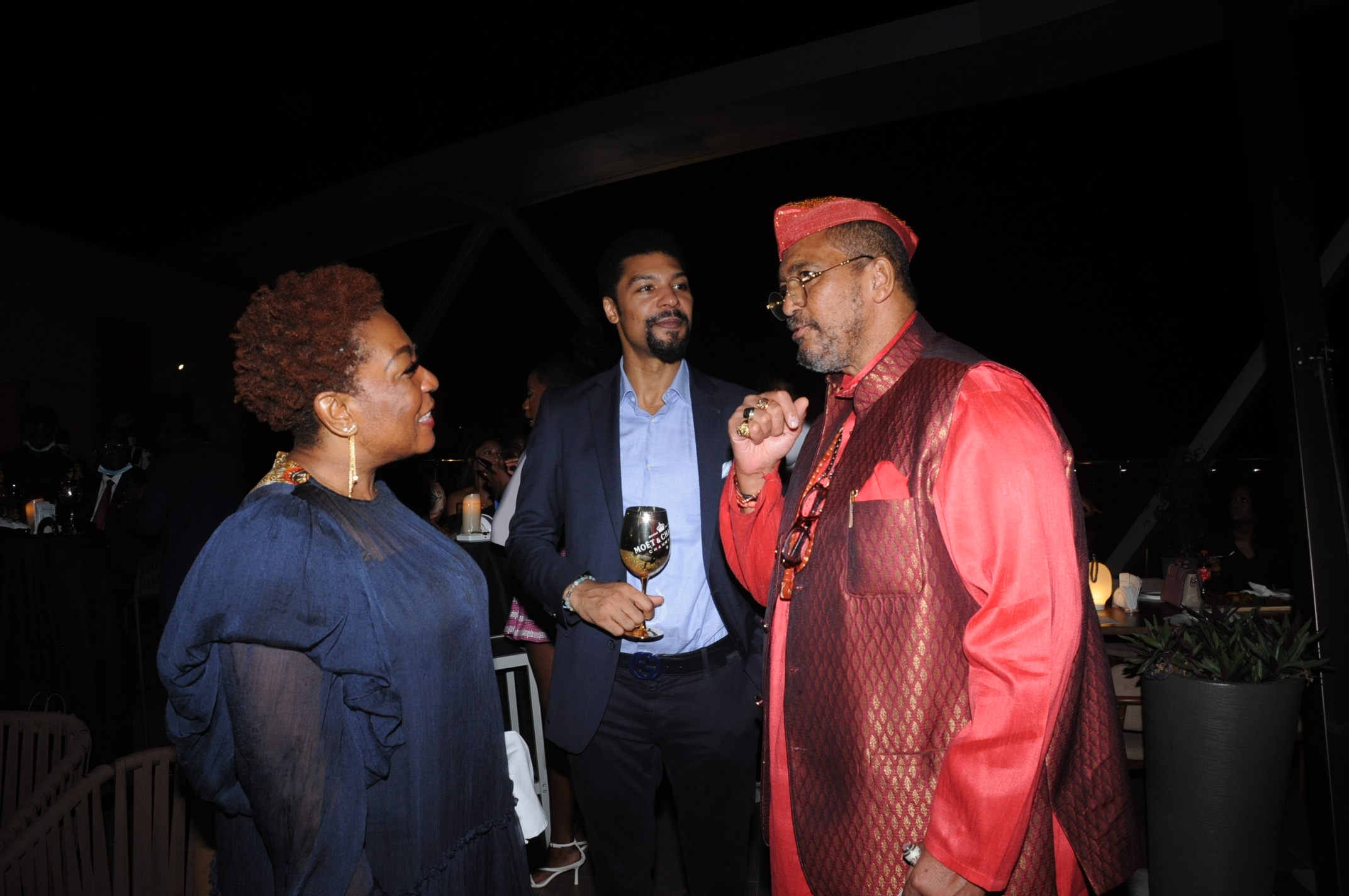 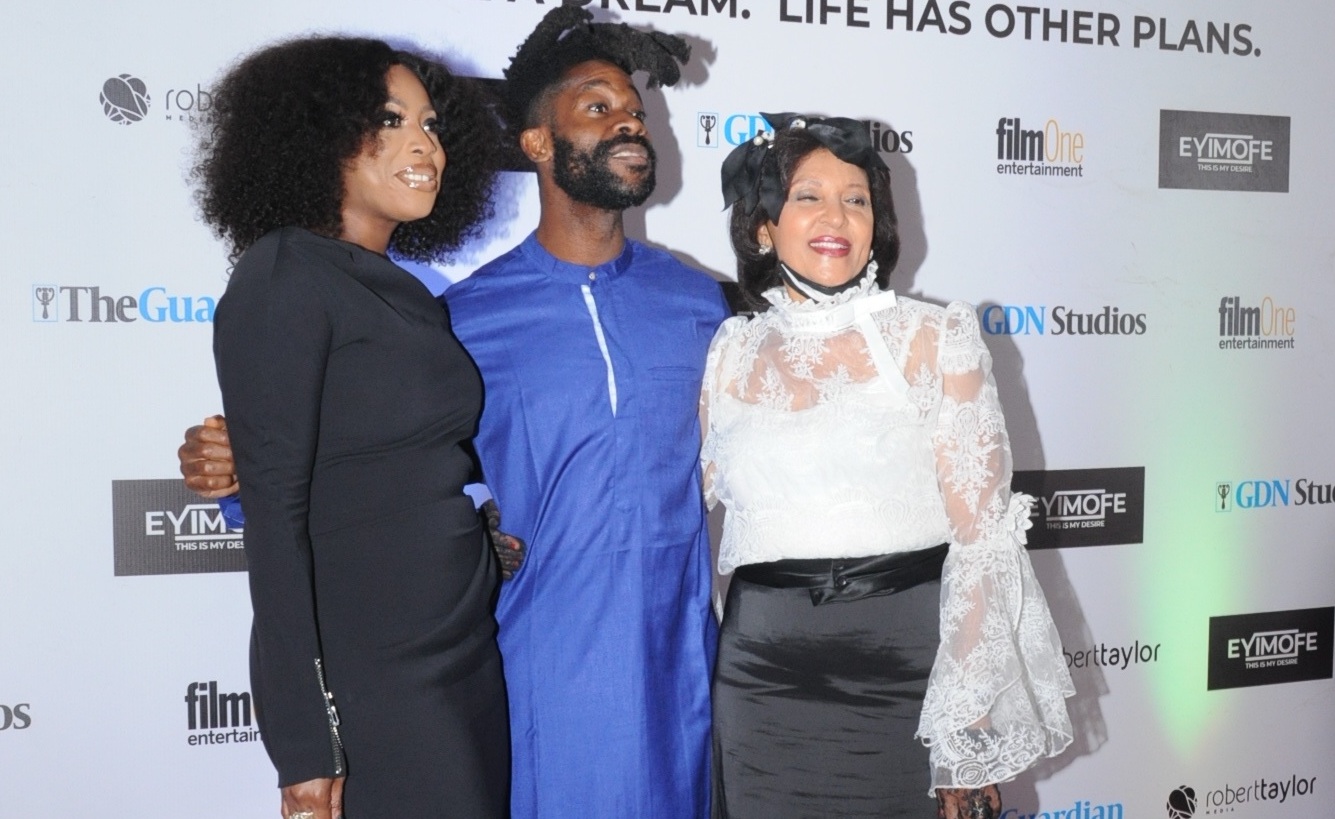 L-R: The founder of EbonyLife TV Mo Abudu, co-director, writer and producer of Eyimofe Chuko Esiri and one of the executive producers of the film and the chairman of the Guardian Newspapers Limited Lady Maiden Alex Ibru at the Nigerian premiere of the film in April.

On the filmmakers’ part, director Chuko Esiri said, “When you trace the thread it begins with us watching the Criterion edition of Vittorio De Sica’s Bicycle Thieves. That film and so many others bearing the twin-faced logo of Janus taught us that the world was much closer than we could have ever imagined and that the stories of disparate cultures and people mattered. To be able to bring EYIMOFE to audience’s across North America with Janus and Criterion is truly a dream come true and we cannot wait to share our corner of the world.”

Set in Lagos, it is a two-chapter film that follows the stories of Mofe (Jude Akuwudike), a factory technician, and Rosa (Temi Ami-Williams), a hairdresser, on their quest for what they believe will be a better life on foreign Shores.

What's New
Rihanna Is The Youngest Female Self-Made Billionaire
8 hours ago
Rihanna is the youngest female on the Forbes 2022 list of "America's Richest Self-Made Women," at age 34.  According to Forbes' 2022 list, the "Umbrella" singer sits at no.21 as the youngest self-made female billionaire in the US with a net worth of $1.4billion and the only woman under 40 on the list. The new…

What's New
Gerard Piqué: Barcelona Player Will Not Let His Kids Leave Spain
10 hours ago
Shakira is making it very plain that she wants to move her family from Barcelona to Miami. However, she needs Gerard Piqué's permission in order for Milan and Sasha to leave Spain, and the football player will most likely say no. The primary news surrounding Shakira and Piqué's impending divorce is the Barcelona football player's…

What's New
Ex-BBN Housemate Bisola Gives Up On "Miss Independent" Lifestyle
10 hours ago
Bisola Aiyeola, a reality TV star and actress from Nollywood, has stated that she is sick of living alone and needs a man. The actress made this statement this during discussions with Ebuka Obi-Uchendu at the Blackbox Roundtable. Ebuka recently featured Tacha, Ceec, Alex, Mercy Eke, Bisola, Tboss, Dorathy, and Erica as guests on his…

What's New
Nollywood's Mofe-Damijo Turns 61
12 hours ago
Richard Mofe-Damijo, a seasoned actor in Nollywood, turned 61. The actor popularly known as RMD at midnight, uploaded pictures of himself to Instagram. He thanked his family, friends, business associates, and others in the caption. His message read “This is 61 and counting! Super grateful and thankful for God’s grace upon my life. Birthdays are…

Film
‘The Wendy Williams Show’ Social Media Accounts Deleted
12 hours ago
Two weeks after “The wendy Williams Show” aired its final episode, its social media sites have been deleted. The iconic daytime talk show hosted by Wendy Williams herself first premiered in 2008 and came to an end on June 17 after she suffered health problems. The show’s website has been completely scrubbed while fans can…

Music
Burna Boy Drops Surprise Teaser Off 'Love, Damini' Album
1 day ago
“African Giant” Burna Boy has promised to drop new teasers off his forthcoming “Love Damini” album every day until its 8th July release. The Grammy Award-winning singer made this known in a tweet on Monday. He wrote, “Apparently I was born just after midnight, so I’m gna be dropping teasers everyday till release at midnight…

Music
Big Sean And Jhené Aiko Are Expecting A Baby
2 days ago
Lovebirds Big Sean and Jhené Aiko are set to become parents. The Grammy award-winning couple is expecting their first child together. The news of the couple's pregnancy was first broken by news outlet TMZ which first shared photos of Aiko wearing a maxi gray dress, spotting a baby bump with beau Big Sean right by…

Music
Ugoccie: I Want To Be Among People Holding It Down For Indigenous Music
4 days ago
With ambiguous laws surrounding its legality, as well as weak law enforcement, Nigeria’s commercial sex industry continues to thrive in plain sight. It is even scarier when one realises

Music
Taylor Swift Reportedly Engaged
1 Jul
Singer Taylor Swift is reportedly engaged to beau Joe Alwyn. According to Page Six, a source informed them that Alwyn popped the question months ago, but only their closest friends and family were informed. The source said "Basically immediate family, and trusted, very old friends. Everyone has been sworn to secrecy, too.” “Again, only a…

Film
Disney May Lose Exclusive Rights To Mickey Mouse
1 day ago
Entertainment giant Disney may lose its exclusive rights to iconic cartoon character Mickey Mouse in 2024. US Copyright law states that intellectual property on an artist's work expires 95 years after its first publication. As such, the 95-year-long copyright held on Mickey Mouse by Disney will expire in 2024, giving anyone the opportunity to use…

Film
Amber Heard's Attorneys To Appeal Johnny Depp Defamation Case Verdict
2 days ago
Amber Heard’s attorneys are looking to appeal or throw out the jury verdict in the widely aired defamation case between the actress and her ex Johnny Depp. Heard’s attorney sent a 43-page filing to a Virginia court on Friday, arguing that the verdict lacked sufficient evidence. In one filing, Heard’s team argues that Depp’s claim…

Film
Johnny Depp Set To Make Film Debut In "Jeanne du Barry "
1 Jul
Johnny Depp is set to film in a new film project "Jeanne du Barry." Ever since the announcement of the jury's favourable judgment for Johnny Depp, the actor has been entangled in a debate about whether he will return to the Pirates of the Caribbean franchise. Depp will instead, will return under Maiwenn's guidance, with a…

Film
Stranger Things: A Review Of Season 4 Part 2
1 Jul
The news that Part 2 of Stranger Things Season 4 would only contain two episodes as opposed to Part 1's seven may have initially looked confusing, but the grand finale of the smash series is not some series to hurriedly watch. Prepare to devote four hours to as much Upside Down mayhem as you can…

What's New
From "Thor" To "Hulk" Chris Hemsworth To Play Hulk Hogan In New Film
1 Jul
Chris Hemsworth is excited to transform from the Marvel superhero Thor to the Hulk. In a future film on the legendary American wrestler's ascent to prominence, the 38-year-old Australian actor will play the character of Hulk Hogan. Hogan, whose real name is Terry Bollea, was originally going to be a musician, but his 6' 7"…

On The Cover
The Evolution Of The Nigerian Film Industry
12 Sep 2021
Today, the Nigerian film industry or Nollywood as it is more commonly referred to, is recognised as one of the biggest in the world. There are star actors, higher production values and the intensely enthusiastic participation of global audiences in the burgeoning film scene in the country. However, these advancements did not occur until recently,…

On The Cover
Stories, Culture, And Talent Are Nigeria’s Biggest Assets
24 Oct 2021
Exploring the commercial value of Nollywood, Afrobeats, and Nigeria’s technology ecosystem to the world. We often think and speak of things Nigeria can export in tangible terms. We talk about oil; we talk about rice; we talk about wheat and other agricultural products. Sometimes, we talk about intangible things, but perhaps not often enough. We…

Guardian Life
Eyimofe star Temi Ami-Williams makes history at FESPACO
25 Oct 2021
Temi Ami-Williams, star of the award-winning Nigerian feature film EYIMOFE (This Is My Desire), has made history by becoming the second Nigerian actor to win a prize at Africa's biggest and most prestigious film festival, the Pan African Film and Television Festival of Ouagadougou. Miss Ami-Williams won the FESPACO Prize for the Best Young Actor…

What's New
Catch Up On Events Of The Previous Week
31 Oct 2021
The suspense in the previous week played out, unveiling itself in amusing ways. On one part, we saw the people eating their words rather quickly, and on the other, well, support from the most unusual places. Here are the some of the trending stories that made last week. The battle for the lies Nigerians were…