By Akinwale Akinyoade
Share on Facebook Share on Twitter Share on WhatsApp Share on Telegram
21-year-old business mogul, Kylie Jenner has insisted she has never undergone the knife in reaction to speculations that she has had her face reconstructed through plastic surgery. The mother of one who is the cover star of the March issue of Paper Magazine shut down the rumours saying, “People think I fully went under the knife…

21-year-old business mogul, Kylie Jenner has insisted she has never undergone the knife in reaction to speculations that she has had her face reconstructed through plastic surgery.

The mother of one who is the cover star of the March issue of Paper Magazine shut down the rumours saying,

“People think I fully went under the knife and completely reconstructed my face, which is completely false. I’m terrified. I would never.”

Jenner who is dating rapper, Travis Scott thanked makeup and fillers for her facial features that have sparked speculations about the surgery. Jenner has in the past talked about using makeup to over-line her lips while also issuing the plastic surgery denial.

“They don’t understand what good hair and makeup and, like, fillers, can really do,” she said.

Of fillers, she said,

She first opened up about using lip filler in 2015 on an episode of her family’s hit reality TV show, “Keeping Up With the Kardashians”. She said at the time,

“I have temporary lip fillers, it’s just an insecurity of mine and it’s what I wanted to do. I’m just not ready to talk to reporters about my lips yet because everyone always picks us apart. I want to admit to the lips, but people are so quick to judge me on everything, so I might have tiptoed around the truth, but I didn’t lie.”

Also in 2015, she opened up about her lips in an interview with the New York Times.

“I still do Juvéderm (a filler) for my lips. I go to Dr. (Simon) Ourian in Beverly Hills. He’s the best, and he’s super-natural about it,” she told the newspaper. “I was going to somebody before, and it was just looking crazy.”

“I haven’t had plastic surgery. I’ve never been under the knife. People flashback to pictures of me when I was 12 and say ‘Kylie’s so different,’ but how can I look the same from 12 to 18?’”

On how makeup transforms lives, the beauty entrepreneur said,

“Makeup is something that makes me feel empowered, makes me feel good, and I think it’s such a positive thing. There’s no harm in playing around with it and feeling good about yourself.”

Jenner went on to speak on how her parents financially cut her off when she was younger.

“My parents told me I needed to make my own money, it’s time to learn how to save and spend your own money, stuff like that. What I’m trying to say is I did have a platform, but none of my money is inherited.”

In the meanwhile, check out her photoshoot from the Paper magazine cover below, 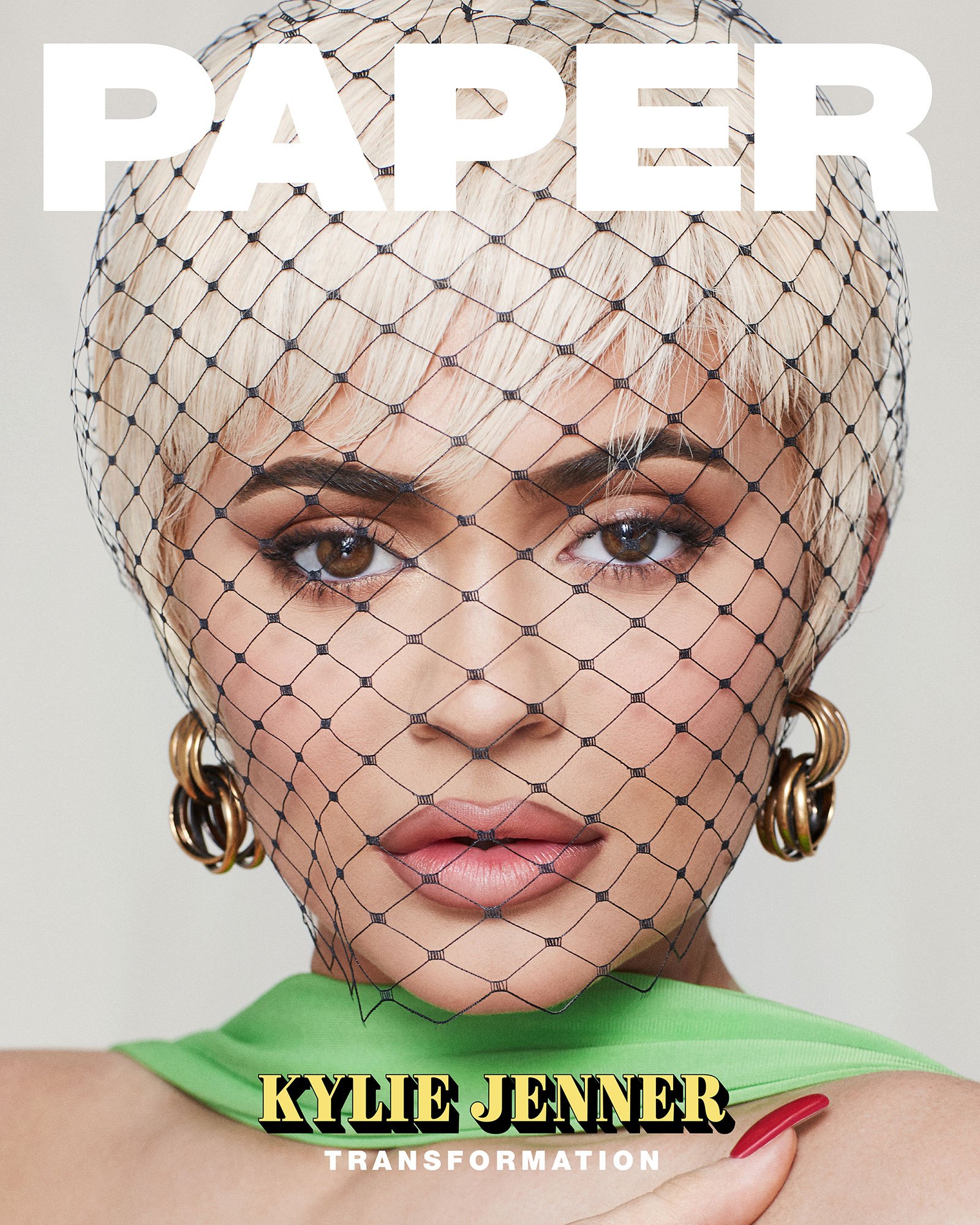 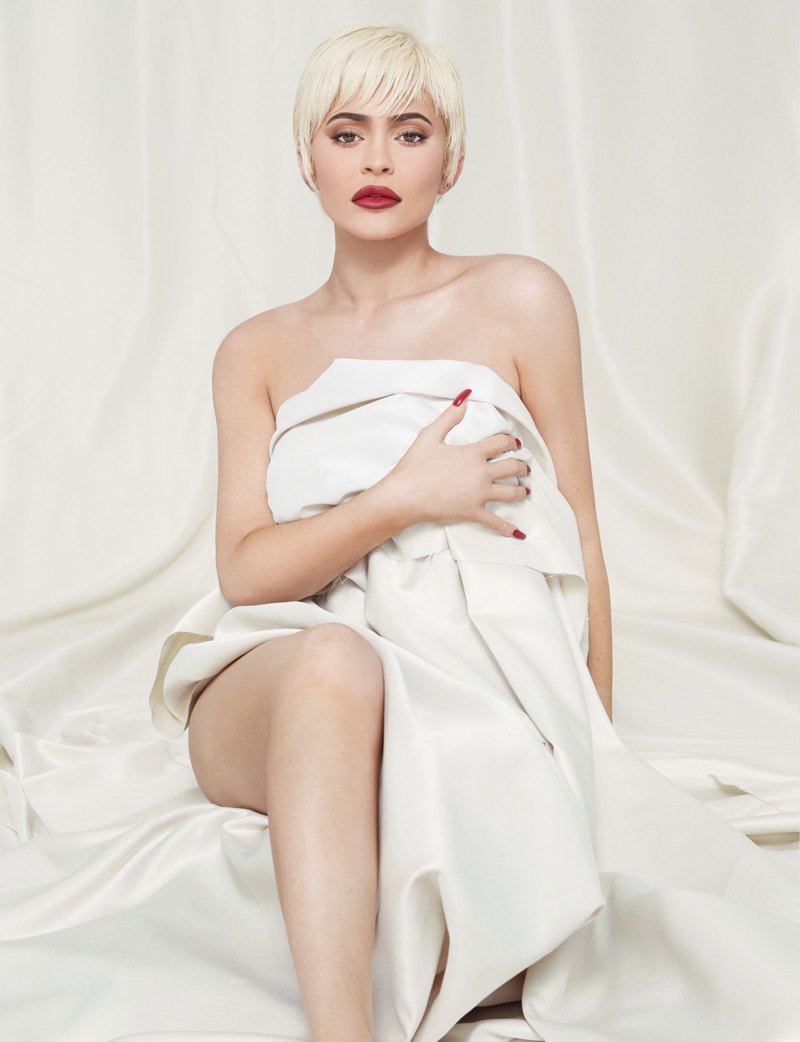 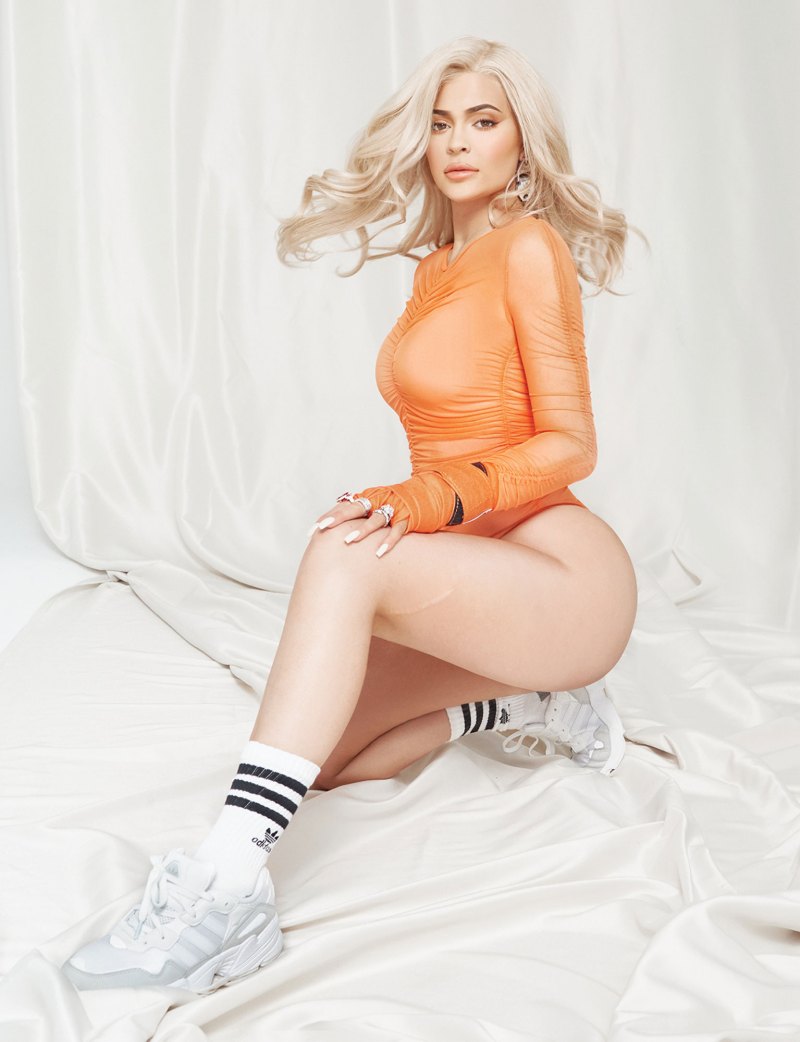 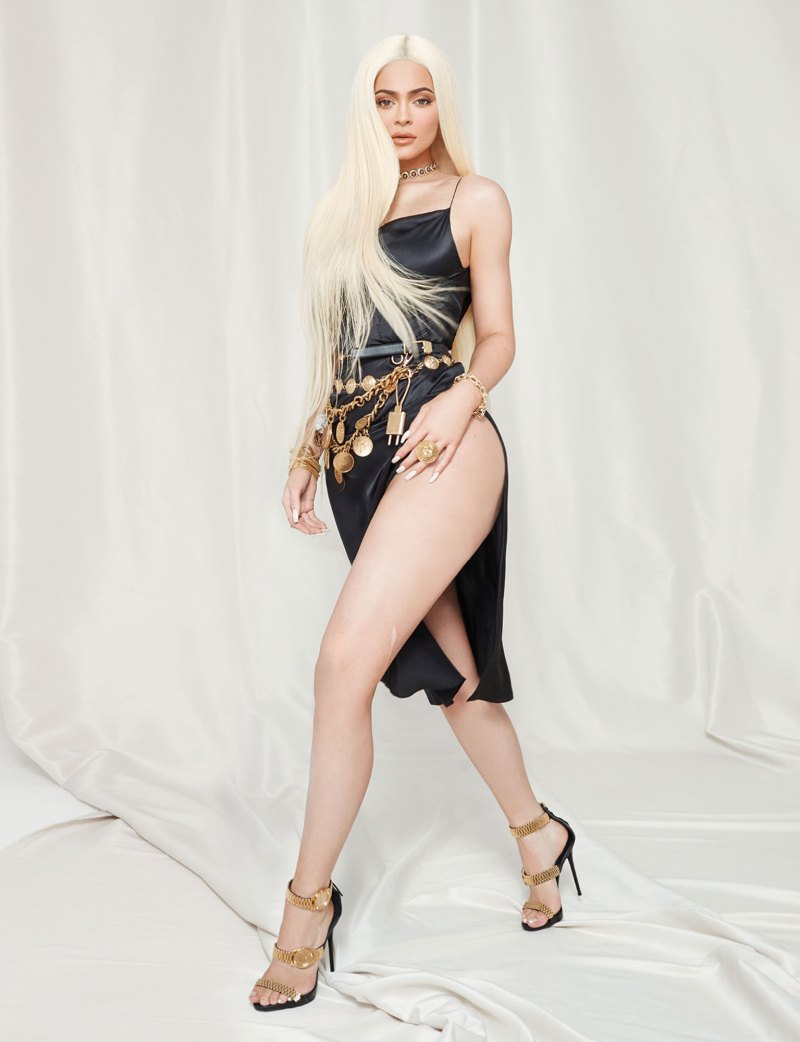 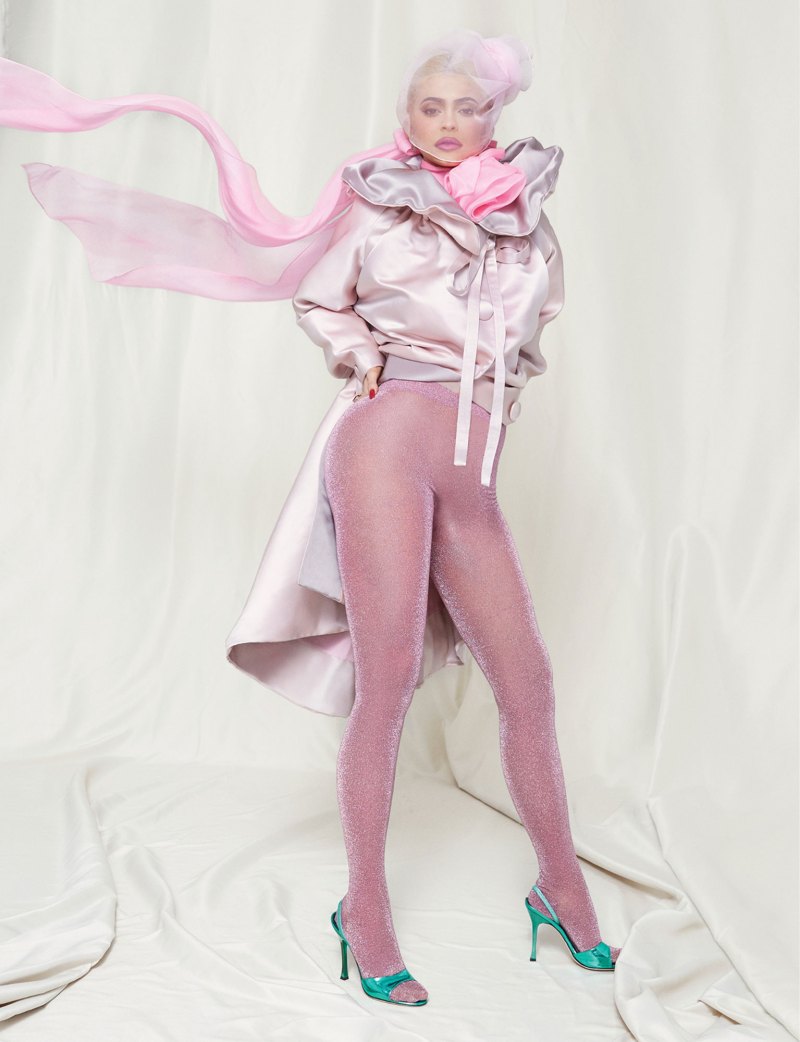 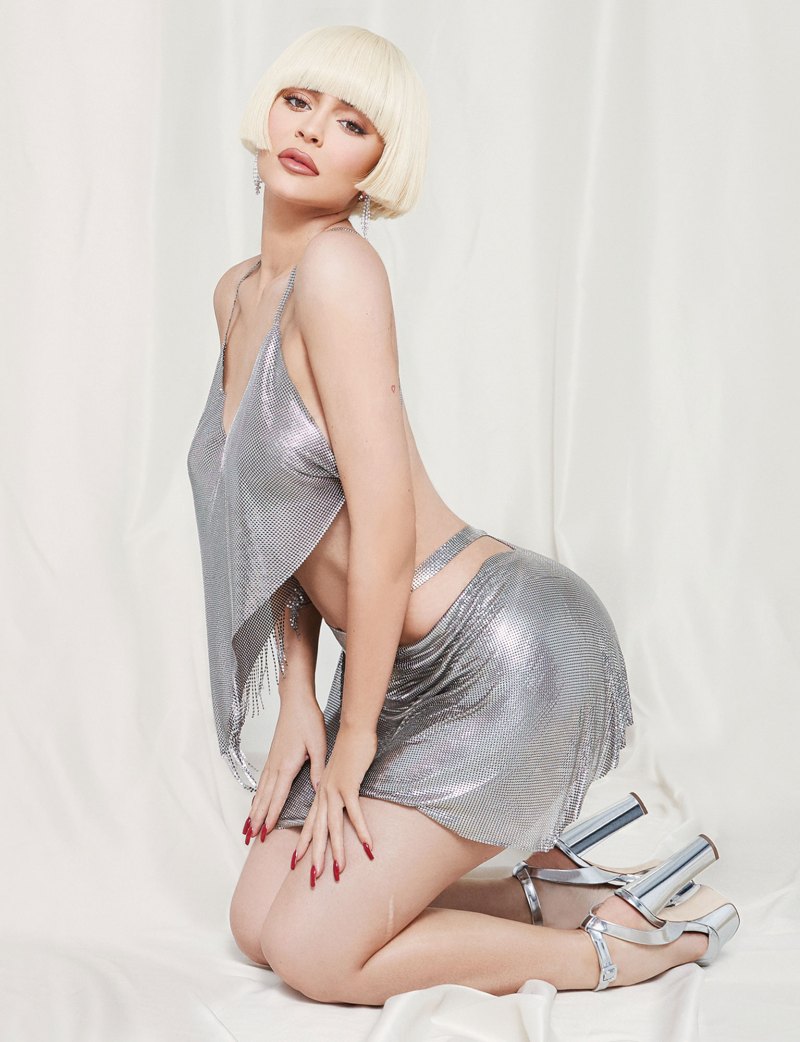 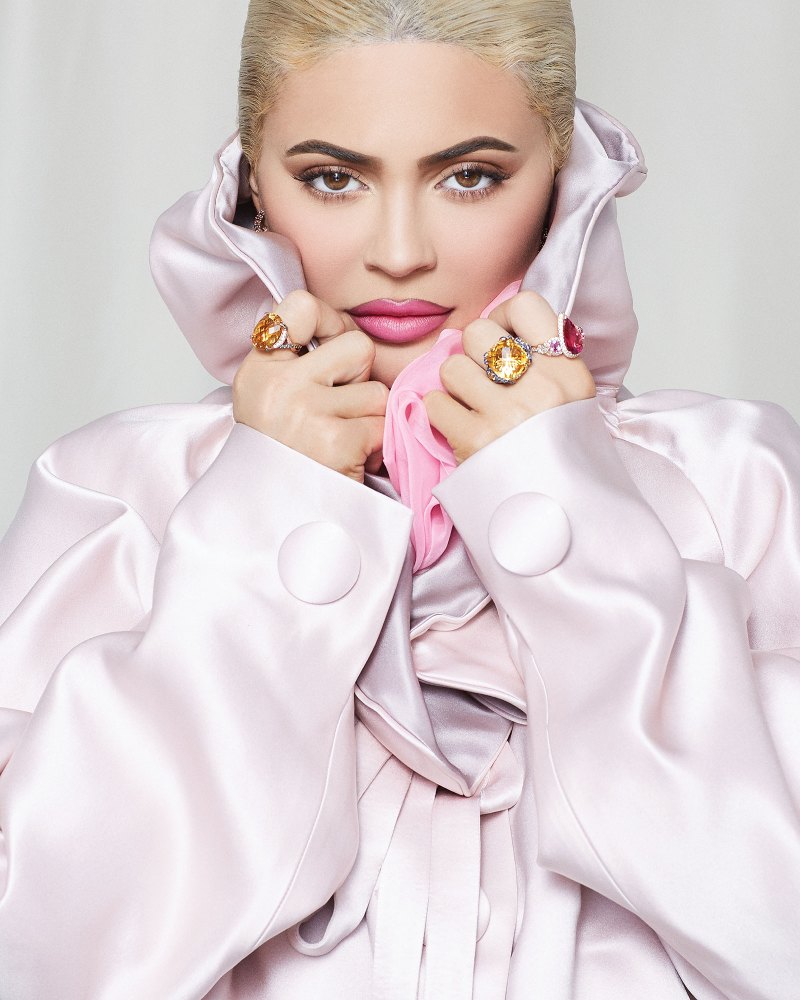 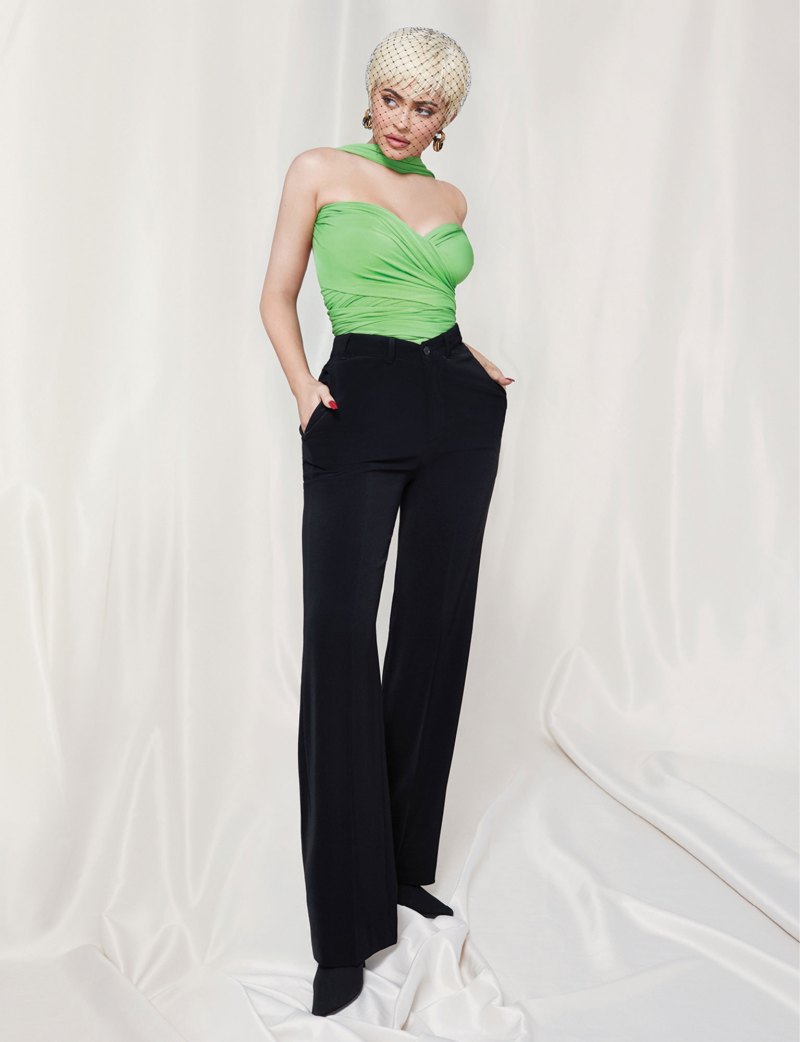 Events
A Glimpse Into Johnny Drille's Walk With Johnnie Walker At His Private Concert
12 hours ago
Over the weekend, Johnnie Walker and Johnny Drille partnered to deliver the most wonderful outdoor experience for whisky lovers and lovers of good music. Hosted at Muri Okunola park Victoria Island Lagos, fans of Johnnie Drille were treated to the finest of Johnnie Walker’s Highball cocktails as they immersed themselves in the live performances by…

Film
Halle Berry Reveals She Set Her Razzie For Worst Actress In Catwoman 'On Fire'
12 hours ago
American actress Halle Berry revealed that she set her Razzie award for Worst Actress in 2004's Catwoman ablaze after receiving the award.  The Golden Raspberry Awards, popularly known as the Razzies and Razzie Awards, is a parody award show that honours the worst cinematic projects of the year. The 55-year old actress speaking to Vanity Fair revealed…

What's New
Prince Harry upset at being linked to crisis engulfing his father
13 hours ago
Prince Harry has expressed concern about a Saudi donor at the centre of Prince Charles' charity's cash-for-honours storm. Michael Fawcett, the Prince's Foundation's chief executive, recently resigned over allegations that he offered assistance in obtaining a knighthood and citizenship in exchange for charitable donations. Between 2014 and 2018, an internal investigation found "coordination" between Fawcett…

Travel and Places
Travelling This Holiday? Here Are Some Packing Tips For You!
1 day ago
The holiday season is closer than ever, and people are getting ready to take some time off to cool off. All work and no play makes a dull and worn out you! If travelling is part of your cooling off for Detty December, preparing and packing for your trip is a delicate aspect to pay…

Music
DJ To Win N3,000,000 At This Year’s Mdundo DJ Battle
1 day ago
Mdundo, Africa’s leading online music service, has launched a DJ competition giving out N3,000,000 as well as radio airplay to the winning DJ. The competition is creating a platform for DJs in Nigeria to showcase their talents to Mdundo’s 10m monthly users.

Music
Big Mati To Serve Yuletide Jam, Money Too Useful
3 days ago
FAST-rising Afro-pop star, Adesewa Adaramati, professionally known as Big Mati, is set to rejig the yuletide groove with a new smash hit dubbed, Money Too Useful. On Money Too Useful, Big Mati stretches his discography with the same momentum that adorned his last smash hit, On My Door, which dropped earlier in the year. He…

Music
DJ Neptune… This Life Of Greatness
3 days ago
Within Nigeria’s crop of disc jockeys, Patrick Imohiosen is the gentlest one can ever meet. “Would you like something to drink,” he asked, calmly offering this reporter a seat. Across his tee shirt and baseball cap, the inscription ‘Greatness’ lay boldly.

Music
Little Mix Formally Announces 'Break' After A Decade-long Career
4 days ago
British girl band Little Mix has confirmed they'll be taking a break at the end of their upcoming tour to pursue solo projects after a decade long career.    The trio Leigh-Anne Pinnock, Perrie Edwards and Jade Thirlwall took to social media to announce their break in a heartfelt post.   A message on their official…

Music
For Nigerian-Canadian Singer, Tome, The Wait Is Over
2 Dec
With global dancefloors being ignited by the scintillating log-drums of Amapiano, Nigerian-Canadian superstar, Tome, has joined the league of singers decorating their discographies with the groovy rhythm. With her new song dubbed, Wait, set to drop tomorrow, the ember soirees are set to be enchanted with more African rhythms. For Tome, who has had quite an interesting…

Film
Adegbuyi's 'Bamisoro' Sweetly Captures Young Love
3 days ago
The Nigerian-American artist Adetokunbo ‘Toks’ Adegbuyi has released his latest song. Translated from Yoruba as ‘talk to me,’ Adegbuyi’s “Bamisoro” is an exotic-sounding affair, with rich instrumentation which crosses between Wizkid’s Made in Lagos and the rappers he grew up listening to.

Film
Five Exciting Facts About Hit Spanish Hit Series "Money Heist"
4 days ago
In anticipation of the final five episodes of Netflix's hit series Money Heist, here are five facts about the show you might not have given a second thought.  Money Heist tells the story of a group of criminals who try to pull off the biggest heist in recorded history, to print billions of euros in the Royal Mint…

Film
Netflix Hit Series 'Money Heist' Reaches End
2 Dec
Streaming giant Netflix will release the final five episodes of its Spanish hit series Money Heist on Friday. Created by Spain's private Antena 3 network, the thriller about a gang of thieves and their elaborate heists fast became Netflix's most-watched series not in English after the platform picked up the show in December 2017. The robber characters…

Film
Watch: A Naija Christmas Trailer Out Now
2 Dec
Christmas time in Nigeria is a joy to experience, with not to be missed festive events dotting everyone’s calendar. This year Netflix and Kunle Afolayan will give Nigerians even more to enjoy! Following the announcement of Netflix’s first Nigerian Christmas film – A Naija Christmas; produced and directed by Kunle Afolayan, the global streaming giant…

Film
Netflix & Chill This December: New Movies To Look Out For
1 Dec
Get in on the Festive Cheer! December  is packed with titles that will have you enjoying the festivities with so much movie options to binge on, from  A Naija Christmas, the story of a mother's Christmas wish and the grand prize that comes with it which sets off a fierce competition between her sons, to…

Music
DTG Baby: Young, Talented And Driven
28 Oct
Youth culture and music go hand in hand because young people relate a great deal to the music they listen to and it equally plays a huge role in shaping their mindset most times. Shifting focus from consumer to creator, young artistes especially Nigerians have developed their sound to the point where it’s no longer…

On The Cover
Cosmetic Surgery: The Idea Of Perfection?
31 Oct
October 23, 2005 - Nigeria’s first lady, Stella Obasanjo, was declared dead from complications of a tummy tuck cosmetic surgery in Marbella, Spain, a few weeks before her 60th birthday. At the time, cosmetic surgery was still a foreign name concept in the country. Spoken about in bourgeois circles, 27-year-old Modupe Ozolua, founder of Body…

World
At least 8 dead after crush at Texas music festival
6 Nov
At least eight people died and several were wounded in a crush at the Astroworld music festival in the southern US state of Texas on Friday night, authorities said.

What's New
Travis Scott, Drake Sued Over Astroworld Tragedy
8 Nov
Rappers Travis Scott and Drake have been reportedly sued following the tragedy at the Astroworld concert that left eight people dead and dozens injured. Confirming the news, Texas firm Thomas J. Henry Law tweeted a Daily Mail story on the suit confirming that it had filed "one of the first lawsuits in Travis Scott Astroworld…

What's New
Travis Scott Promises To Cover Funeral Expenses Of Astroworld Victims
9 Nov
Travis Scott has vowed to cover the funeral expenses of the eight victims who died in the 2021 Astroworld Festival Tragedy. According to a statement released by his representatives on Monday, the Houston-born artist will also partner with BetterHelp to provide free mental health services to those affected by the tragedy. "Travis remains in active…