Kuwait swears in new emir after death of ruler

By AFP
Kuwait on Wednesday swore in its new emir, Sheikh Nawaf al-Ahmad Al-Sabah, and prepared to receive the body of his half-brother, the late ruler Sheikh Sabah who died in the US at the age of 91.
1 of 10 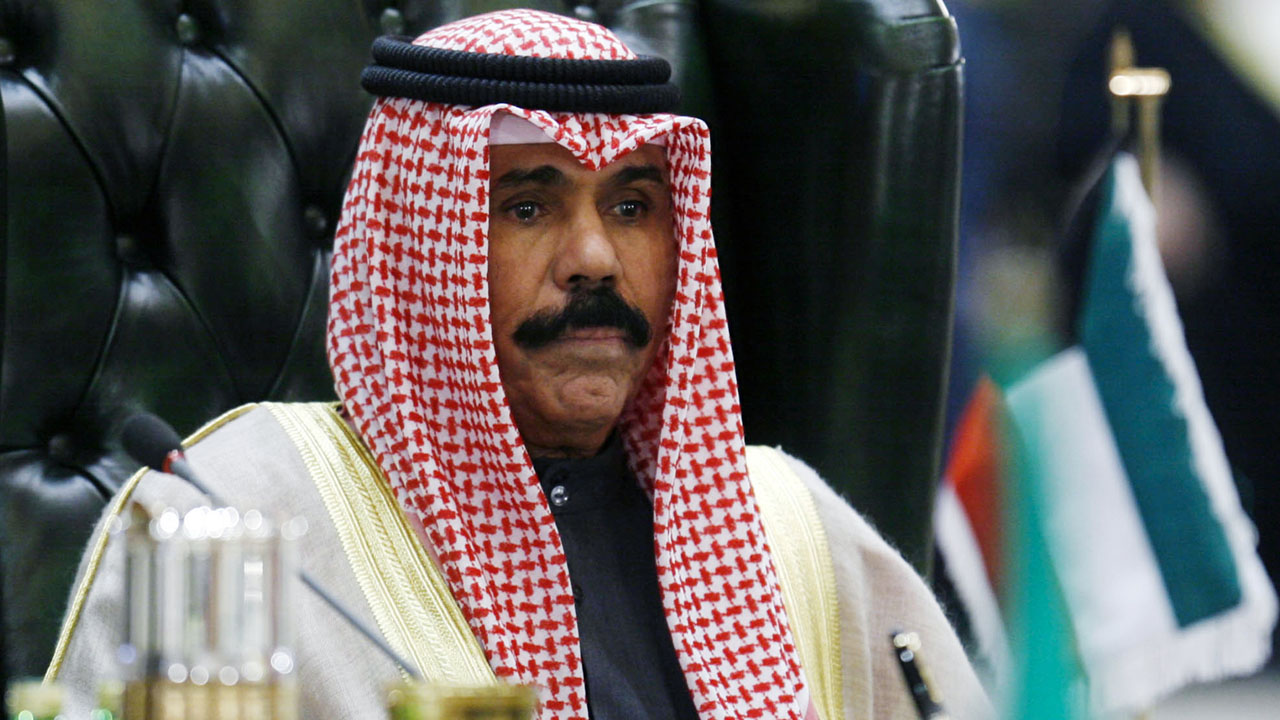 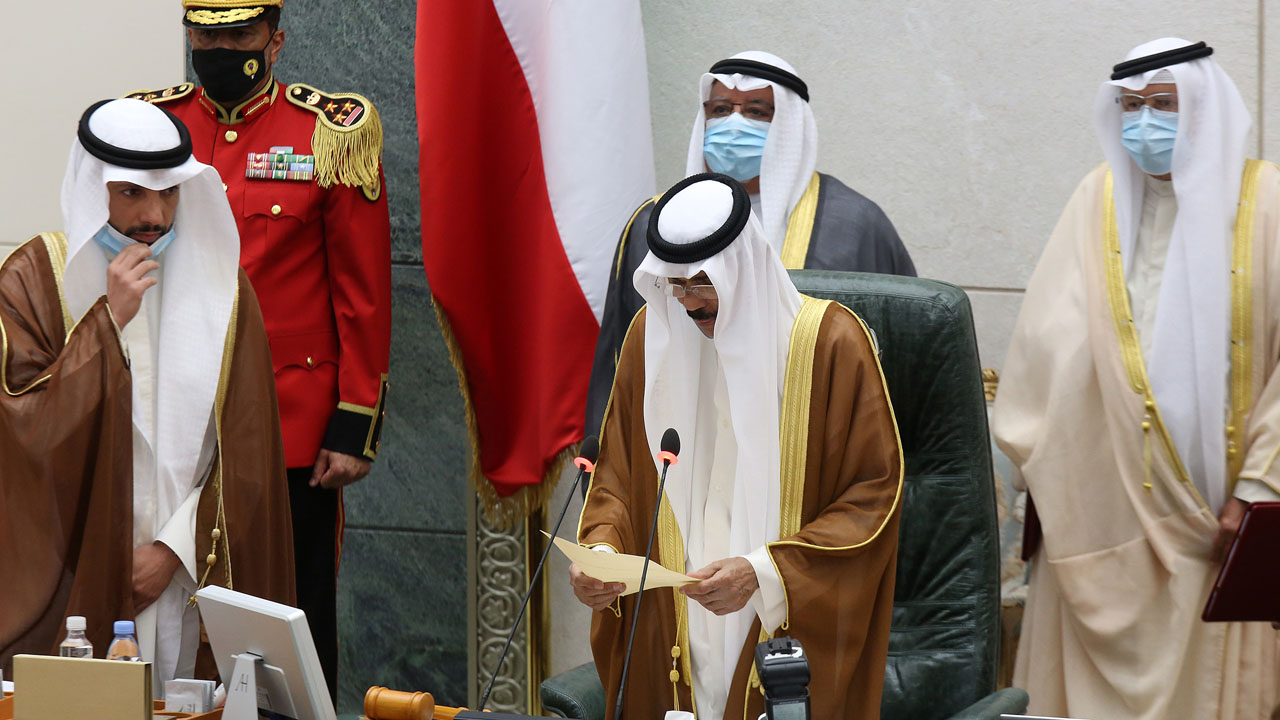 Sheikh Nawaf al-Ahmad Al-Sabah (C) reads a statement asfter being sworn in as Kuwait's new Emir at the National Assembly in Kuwait City, as Parilament Speaker Marzouq al-Ghanem (L) looks on, on September 30, 2020. - Kuwait on Wednesday swore in its new emir, Sheikh Nawaf al-Ahmad Al-Sabah, after the death of his half-brother, Sheikh Sabah, who died in the US at the age of 91. (Photo by Yasser Al-Zayyat / AFP)

Kuwait on Wednesday swore in its new emir, Sheikh Nawaf al-Ahmad Al-Sabah, and prepared to receive the body of his half-brother, the late ruler Sheikh Sabah who died in the US at the age of 91.

Sheikh Nawaf was visibly emotional as he addressed the National Assembly a day after the death of the emir, an acclaimed diplomat and mediator who ruled for 14 years.

“The precious confidence that the people of Kuwait have entrusted in us will be guarded with our lives,” the 83-year-old said after taking the oath of office.

He pledged to “serve the nation” in the address before lawmakers, who sat socially distanced and in masks, in line with coronavirus precautions.

The remains of Sheikh Sabah al-Ahmad Al-Sabah are expected to arrive in Kuwait City later Wednesday, on a flight from Minnesota where he had been undergoing treatment in hospital since July.

According to the royal court, the funeral will be “restricted to the emir’s relatives” — a move likely designed to avoid large crowds amid the coronavirus pandemic. The country has already begun a 40-day period of national mourning.

Sheikh Sabah earned a reputation as a shrewd, unshakeable leader who helped steer his country through the 1990 Iraqi invasion, crashes in global oil markets and upheavals in parliament and on the streets.

World leaders and Kuwaitis alike have hailed the legacy of the late emir, architect of the nation’s modern foreign policy and mediator in some of the worst crises to grip the Gulf.

“This man was the safety valve of the Arab world, not just for Kuwait,” Bandar al-Dahani, a Kuwaiti citizen, told AFP.

“God willing, that goodness will be in Crown Prince Sheikh Nawaf and he will follow the emir’s path.”

Generational transition looms
Sheikh Nawaf, who has held high office for decades, takes over with Kuwait facing the repercussions of the coronavirus crisis, which triggered a sharp decline in oil prices and severe economic consequences for Gulf states.

The elder statesman, who was named heir apparent in 2006, served as defence minister when Iraqi troops rolled into the oil-rich emirate in 1990, and also as interior minister in the face of challenges from Islamist militants.

The new leader is popular within the ruling Al-Sabah family and is reported to have been a consensus choice for ruler. He also enjoys a reputation for modesty and has largely maintained a low profile.

Major policy changes are not expected during his reign, even after the Gulf underwent a seismic shift with Kuwait’s neighbours, the UAE and Bahrain, opting to establish relations with Israel.

Normalisation with the Jewish state is highly unpopular among the Kuwaiti public, which largely supports the Arab world’s historic position of demanding a resolution of the Palestinian cause before giving diplomatic concessions to Israel.

Despite expectations for a smooth succession, there could be more spirited debate over who the new crown prince should be.

Kuwait’s constitution stipulates that the ruler should be a descendant of the nation’s founder, Mubarak al-Sabah, but the throne has alternated between the descendants of his sons, Salem and Jaber, for four decades.

“Sheikh Nawaf al-Ahmed should be viewed more as a caretaker than as a watershed new leader,” said Cinzia Bianco, a research fellow at the European Council on Foreign Relations.

“Behind the scenes, however, younger princes would likely continue to compete to succeed him.”

Nigeria
Banks in defining moment as eNaira kicks off today
1 hour ago
Nigeria makes history today as it becomes the first African country to digitise its currency, an exercise the Central Bank of Nigeria (CBN) has described as “one of the milestones of a long journey.”...
Nigeria
Declare bandits terrorists, 36 speakers tell Buhari
1 hour ago
The 36 House of Assembly speakers has called on President Muhammadu Buhari to declare bandits as terrorists and enemies of the nation. This was their resolution at a Conference...
Nigeria
Rivers not at war with FG over VAT, Wike clarifies
1 hour ago
Rivers State Governor Nyesom Wike has said his state is not at war with the Federal Government over the controversial Value Added Tax (VAT) as insinuated in some quarters.
Sport
Minister sues former world boxing champion, Bash Ali, over alleged defamatory video, disruptive comments
1 hour ago
Sports Minister, Sunday Dare, has dragged former world cruiserweight boxing champion, Bash Alli, over alleged defamation of character and disruptive comments...
Nigeria
Osinbajo still in race for 2023 presidency, group insists
1 hour ago
Contrary to speculations in certain quarters, Vice President Yemi Osinbajo is very much in the race to succeed President Muhammadu Buhari in 2023, the Dr. Aliyu Kurfi-led Progressive Consolidation Group

Nigeria
Insecurity affects all religions, says cleric
2 hours ago
Christians and other religious adherents resident in Kaduna State are all apprehensive of the state of insecurity in the country.
Nigeria
Ebira-speaking people seek unity, common identity
2 hours ago
Ebira-speaking people across Nigeria have agreed to forge a common ground and adopt a common nomenclature to give them the necessary voice among other ethnic groups in the country

Nigeria
Osinbajo still in race for 2023 presidency, group insists
1 hour ago
Contrary to speculations in certain quarters, Vice President Yemi Osinbajo is very much in the race to succeed President Muhammadu Buhari in 2023, the Dr. Aliyu Kurfi-led Progressive Consolidation Group