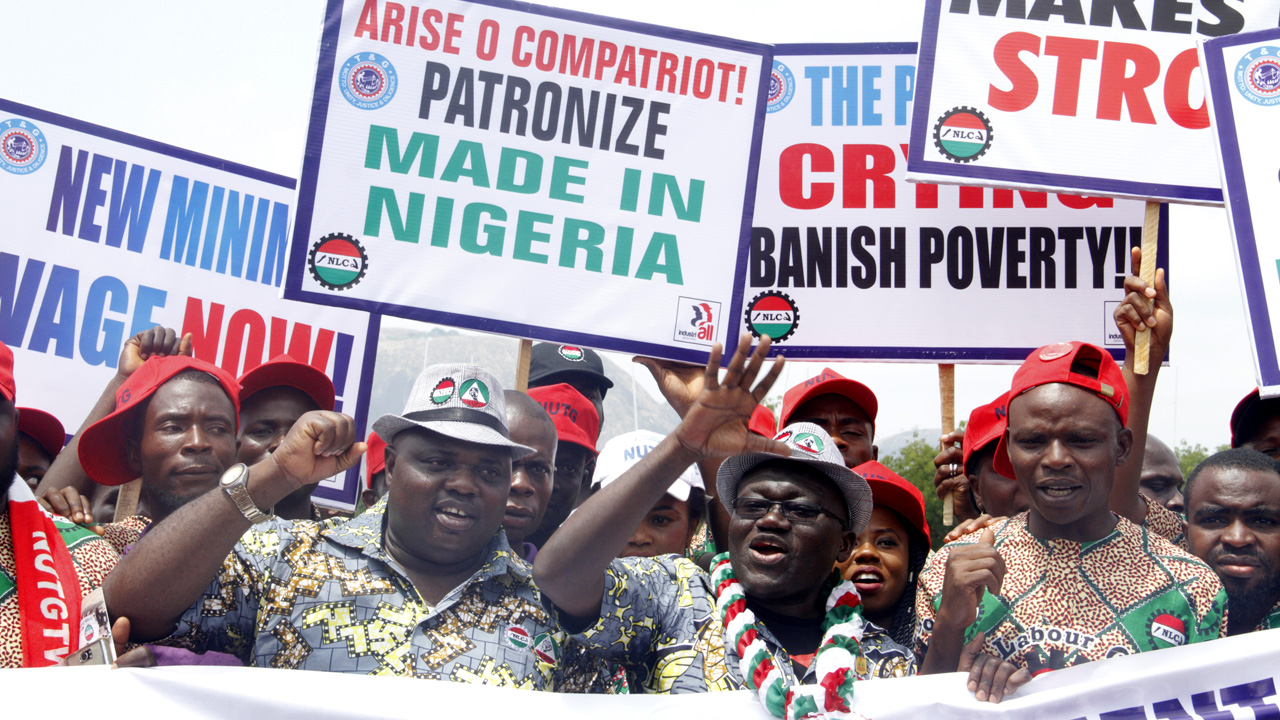 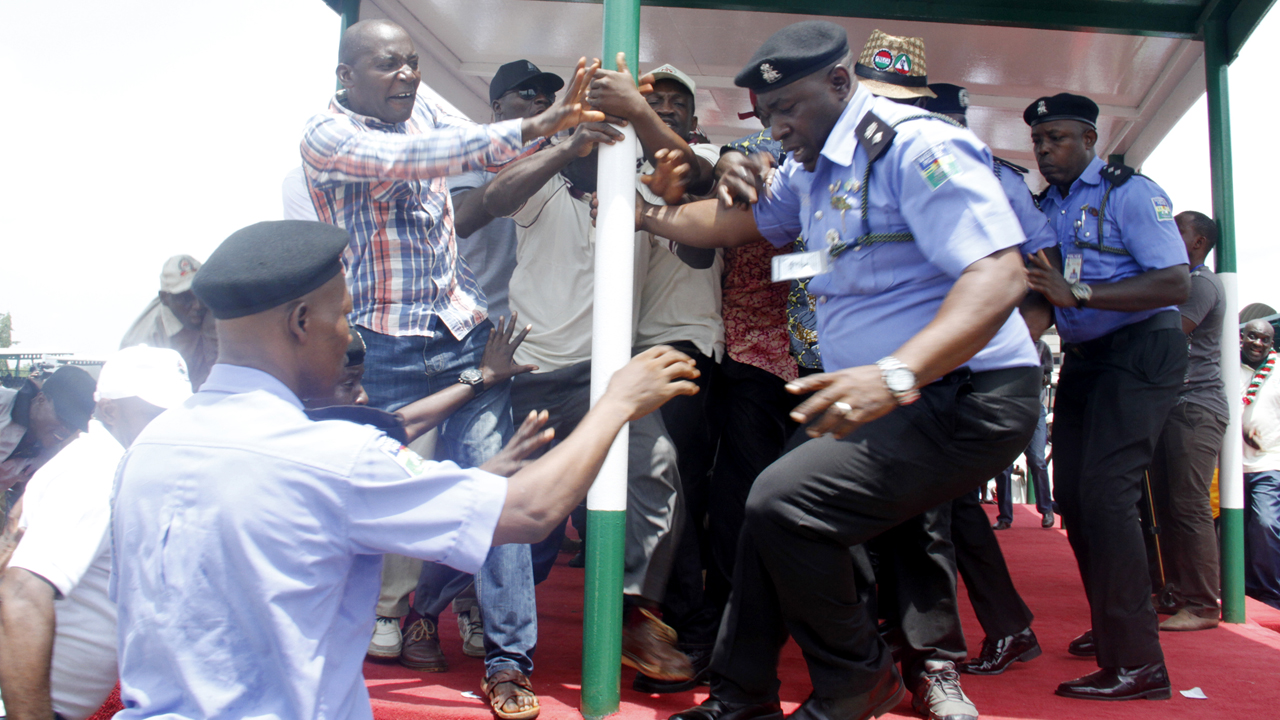 A rally planned for the Eagle Square in Abuja to mark this year’s May Day was disrupted yesterday as thousands of unionists demanded that President Muhammadu Buhari “must address the suffering workers.”

As in Nigeria, millions of protesters across the world hit the streets to mark the day. The protests became violent in some parts of Nigeria, France, Turkey, United States of America (USA), Spain and Russia, among others. In Abakaliki, the Ebonyi State capital, hoodlums violently disrupted a rally organised by the Nigeria Labour Congress (NLC) forcing participants to flee.

Known as May Day, the first day of every fifth month is set aside either to celebrate workers’ rights or as a day of protests and riots. It traces its modern roots back to a world-changing explosion in Chicago. It was originally an ancient pagan holiday celebrating the start of summer. Different groups overtime adapted the celebration to suit their specific cultures and beliefs.

Nigerian workers have been pressing for as much 300 per cent increase in minimum wage — from the current N18, 000 (less than $50) — to mitigate the impact of official pump price of petrol which jumped from N86 per litre to N145.

The drama in Abuja started, when the Minister of Labour and Employment, Senator Chris Ngige, failed to appear in person to address the workers, but said he would only deliver President Buhari’s message to them.

The workers, who claimed to have been deceived on many occasions by Ngige, approached the podium and disallowed further proceedings, warning that they would only listen to the president they voted for in 2015, especially as he had promised to help cushion the sufferings of millions of Nigerian workers.

The scenario, took an uncontrollable twist when former Labour leader Adams Oshiomhole, who is also the immediate past governor of the South-South state of Edo, also mounted the podium to test his popularity thinking it was the solution to calm the aggrieved and disenchanted workers. He was, however, met with stiffer opposition as the chanting crowd assured him of a showdown.

The unfortunate event, threw the dignitaries, including the Speaker of the House of Representatives, Yakubu Dogara and the representative of the Senate President, into confusion.  They were later shielded and rescued out of the venue by security men.

The workers, who defied police water tanks, also took over the podium and seized the microphones chanting ‘Ole …Ole’ (thief..thief) Some aggrieved workers later told The Guardian that the Eagle Square faceoff was a better opportunity to confront a Federal Government that has continued to deceive the people since its inauguration in 2015.

A senior civil servant, Mr. Isaac Omololu, said the large crowd that greeted this year’s May Day celebration at the Eagle Square depicted the apathy Nigerian workers had for the present government.

“Do not be deceived; do not think that we are here to praise government. All the people you see here have ears to hear one thing and that is the possibility of increasing the minimum wage, any other thing short of that is useless.”

“Our own mumu (foolishness) don too much. See how this people dey use us,” Mrs. Jane Yunus, another civil servant told The Guardian.   “The children of these government officials are abroad studying, yet we can’t pay school fees for our children in Nigeria. We are saying no to their sins”

The President of a faction of the NLC, Comrade Ayuba Wabba, said government must be held responsible for the suffering of Nigeria’s under-paid workers, even as inflation bites harder.

Wabba told the media that what happened at the event was nothing but a show of pure anger at what the workers are passing through in the last two years.

In her good will message to Nigerian workers, the Head of Service, Winifred Oyo-Ita enjoined them to sustain a focused support for the current government, as there are efforts to pay outstanding salaries soon.

The scenario in Nigeria also played out in other parts of the world as protesters took to the streets. Turkish government arrested hundreds as anti-government rallies swept through cities. Agence France-Presse (AFP) reports that Turkish police yesterday fired tear gas and plastic bullets at protesters seeking to march to Istanbul’s Taksim Square to celebrate May Day, in defiance of an official ban.

Istanbul police authorities said they arrested 165 people in connection with the protests, including 139 people for “unauthorised marches.” Police tried to stop around 200 protesters in the Gayrettepe district on the European side of Istanbul who wanted to walk to the famous Taksim Square in spite of the ban by city authorities, an AFP journalist said.

In France, the violence took a more dangerous dimension as French CRS anti-riot police officers were engulfed in flames as they faced protesters during a march for the annual May Day workers’ rally in Paris. The protesters had pushed a burning trolley towards them.

The Moscow capital city of Russia also had its own share of the May Day violence yesterday, according to the AFP, as almost a million and a half people turned out in central Moscow the annual parade — many more than in past years — Russian police said.

“Nearly 1.5 million people marched on May 1,” AFP cited the Moscow police as saying in a statement quoted by Interfax news agency.