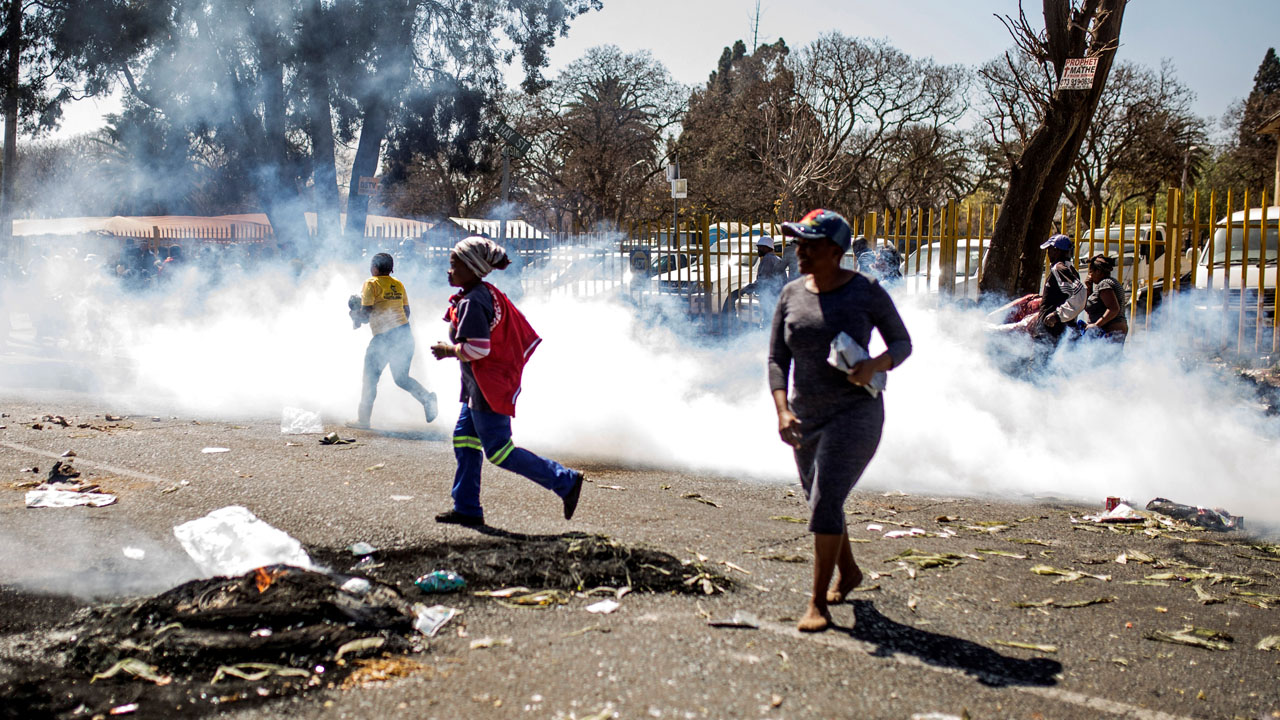 South African looters run through tear gas smoke during a riot in the Johannesburg suburb of Turffontein on September 2, 2019 as angry protesters loot alleged foreign-owned shops in a new wave of violence targeting foreign nationals. (Photo by GUILLEM SARTORIO / AFP) 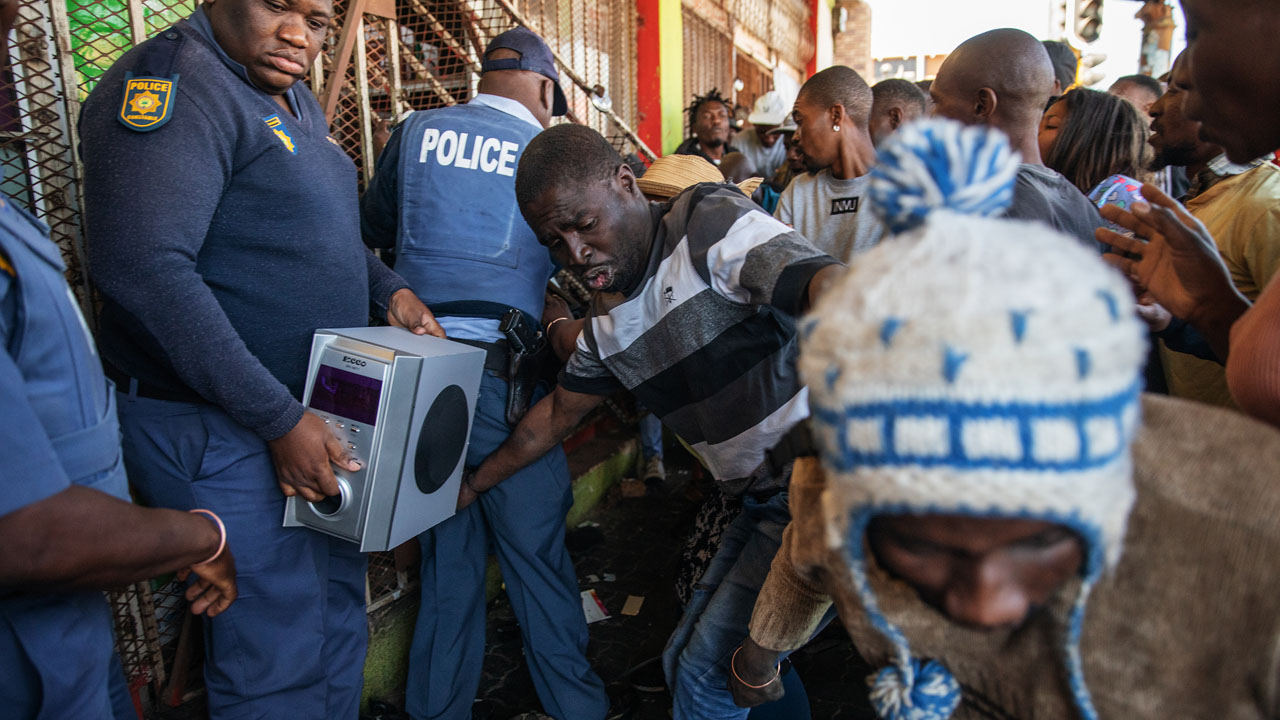 Members of the South African Police Service try to halt looters to enter a shop during a riot in the Johannesburg suburb of Turffontein on September 2, 2019 as angry protesters loot alleged foreign-owned shops today in a new wave of violence targeting foreign nationals. (Photo by Michele Spatari / AFP) 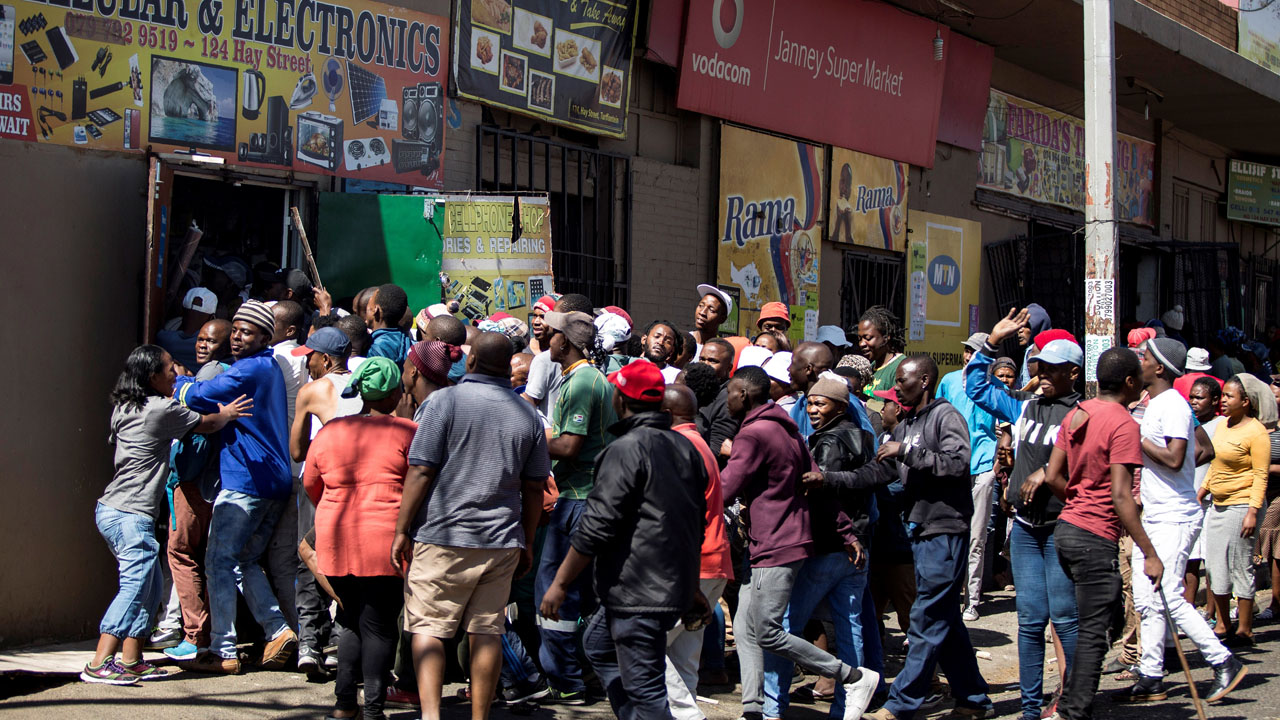 South African police on Monday arrested more than 60 people following looting in Johannesburg and protests in the transport industry linked to a wave of anti-foreigner sentiment.

At least 41 people were arrested after hundreds of people marched through Johannesburg’s Central Business District (CBD), plundering shops and torching cars and buildings, the police said in a statement.

The unrest started on Sunday when an old building in the CBD caught fire and collapsed, killing at least three people. It then spread two eastern suburbs.

Such violence breaks out sporadically in South Africa, where many nationals blame foreigners for high unemployment, particularly in manual labour.

Police Minister Bheki Cele insisted the violence was linked to “criminality” rather than “xenophobia“.

“(Xenophobia) is used as an excuse,” Cele told journalists after a tour of the CBD.

“For now there is nothing that has sparked any form of this conflict between the South Africans and foreign nationals.”

“Received sickening and depressing news of continued burning and looting of Nigerian shops and premises in #SouthAfrica by mindless criminals with ineffective police protection,” he said on Twitter.

“Enough is enough. We will take definitive measures.”

Separately, police in the southeastern province of KwaZulu-Natal (KZN) said at least 20 individuals had been arrested “in connection with incidents related to protests within the trucking industry”.

Taxi drivers clashed with police in the capital Pretoria last week, and truckers started a nation-wide strike on Sunday to protest against the employment of foreign drivers.

In the Western Cape province, several protesters blocked roads with their vehicles.

“Several roads had to be closed for traffic from early morning due to trucks blocking the road while others were seen offloading sand on the road,” said a statement from the provincial transport minister, Bonginkosi Madikizela.

Human Rights Watch last week reported that dozens of truck drivers in the country had died in attacks against foreigners since March 2018.

The report was released after a recent spate of xenophobic violence fuelled by economic decline and record unemployment.

A South African truck owners’ association quoted by the HRW reported 75 such incidents since March this year, 15 of which were independently confirmed by the watchdog.

Lieutenant-General Khombinkosi Jula, police chief for KZN province, where at least two trucks were torched, said they had intensified patrols along major routes.

South Africa is a major destination for economic migrants from the southern Africa region, with many moving from neighbouring Lesotho, Mozambique and Zimbabwe in search for work.

‘Hungry and angry’
The latest population census in 2011 shows that numbers surged in the previous decade, with nearly half of international migrants having moved to South Africa between 2005 and 2010. An unknown number of the migrants are undocumented.

Labour ministry spokesman Makhosonke Buthelezi last week told AFP that employers “prefer (foreign truck drivers) because they can work long hours at a much cheaper cost, so they tend to exploit them”.

Sipho Zungu, chairman of the All Truck Drivers Foundation told AFP his group had had “nothing to do with the strike”, but stressed that it was fighting for the employment of South African drivers.

But the South African Transport and Allied Workers Union (SATAWU), which has over 200,000 members, distanced itself from the violence.

“Whenever there are faceless people calling a strike, there tends to be violence,” SATAWU spokeswoman Zanele Sabela told AFP.