By AFP
Share on Facebook Share on Twitter Share on WhatsApp Share on Telegram
The body of Kuwait's late ruler Sheikh Sabah al-Ahmad Al-Sabah arrived home Wednesday after he died in the US at the age of 91, paving the way for his half-brother to be sworn in as the new emir.
1 of 10 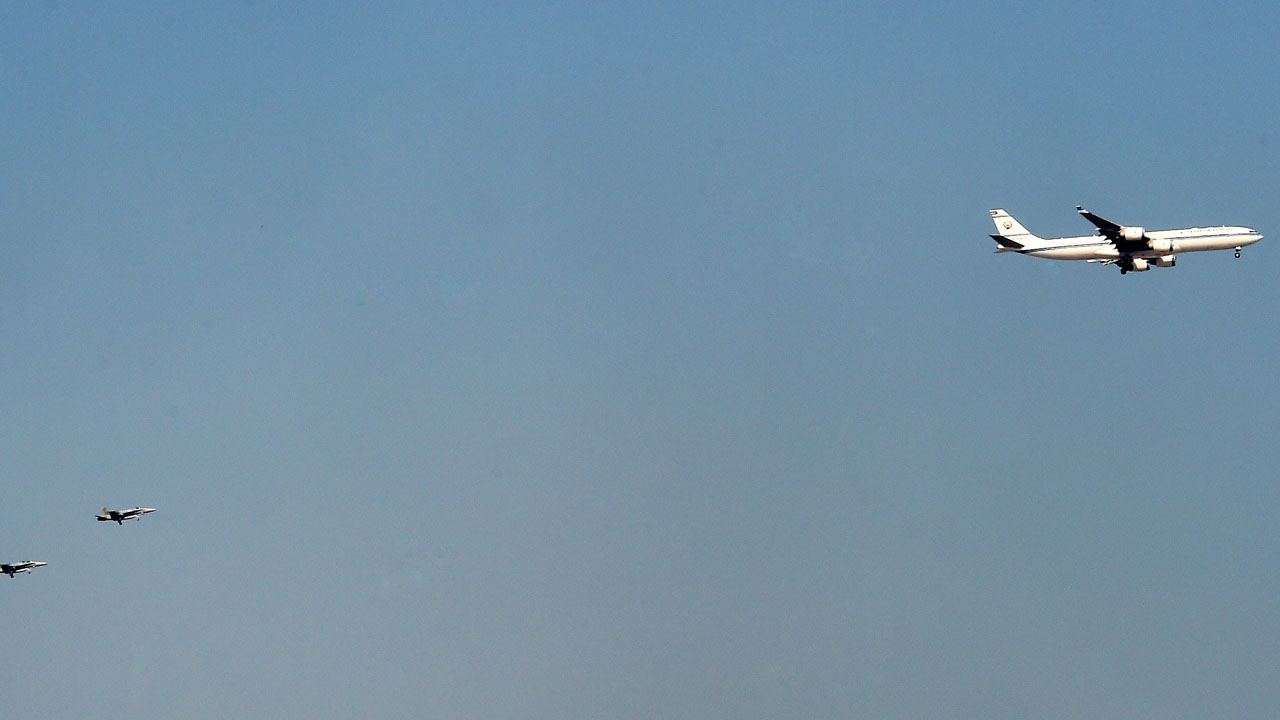 The plane carrying the body of Kuwait's late emir Sheikh Sabah al-Ahmad al-Sabah, escorted by fighter jets, prepares to land in the capital Kuwait City, on September 30, 2020. - Kuwait's emir Sheikh Sabah al-Ahmad Al-Sabah, architect of the nation's modern foreign policy and mediator in some of the worst crises to grip the Gulf, died in the US yesterday at the age of 91. (Photo by - / AFP) 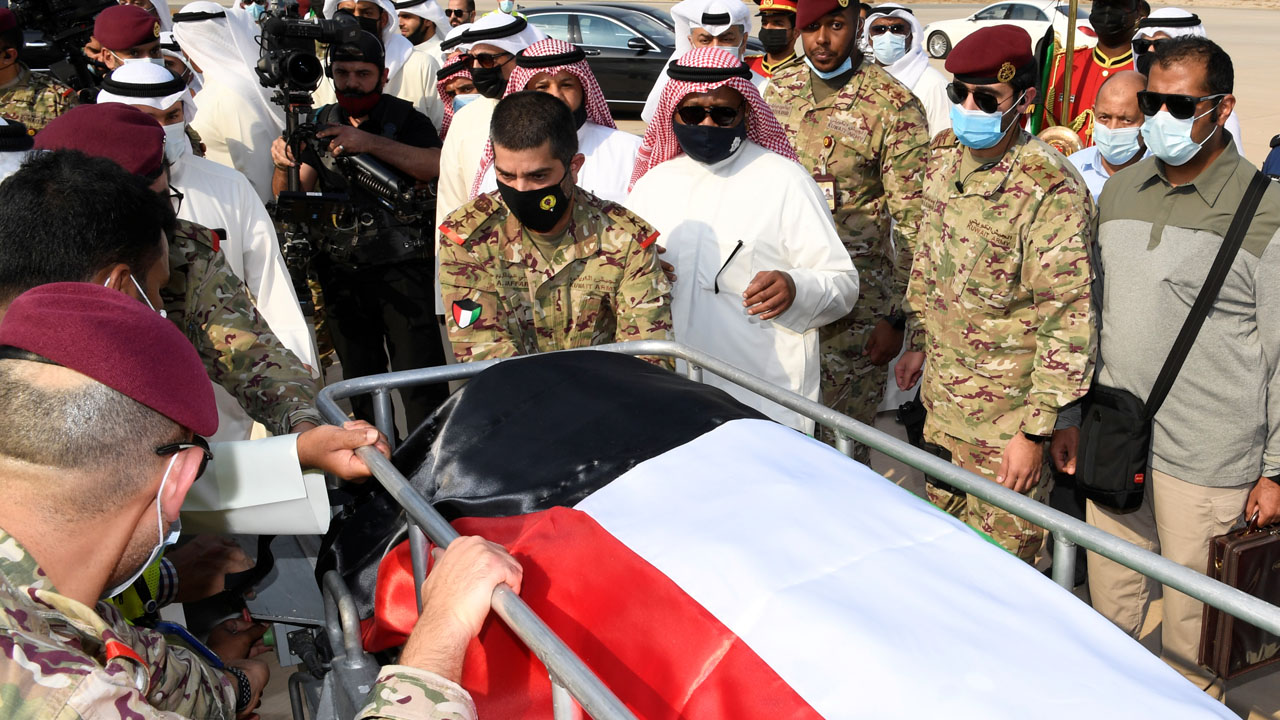 The body of Kuwait's late Emir Sheikh Sabah al-Ahmad al-Sabah, who died after treatment in U.S, arrives in Kuwait City, Kuwait, September 30, 2020. Kuwait News Agency/Handout via REUTERS ATTENTION EDITORS - THIS IMAGE WAS PROVIDED BY A THIRD PARTY. NO RESALES. NO ARCHIVES.
The body of Kuwait’s late ruler Sheikh Sabah al-Ahmad Al-Sabah arrived home Wednesday after he died in the US at the age of 91, paving the way for his half-brother to be sworn in as the new emir.

Sheikh Sabah, an acclaimed diplomat and mediator who ruled the oil-rich nation for 14 years, had been undergoing hospital treatment in Minnesota since July.

A Kuwaiti government Airbus A340 bearing his remains landed in the capital, where the authorities blocked roads to allow passage of a convoy to the Bilal bin Rabah Mosque for funeral prayers before the burial.

The new emir, 83-year-old Sheikh Nawaf al-Ahmad Al-Sabah who was sworn in at the National Assembly earlier Wednesday, was at the airport along with other Kuwaiti officials, all wearing masks in line with anti-coronavirus measures.

His late emir’s remains were wrapped simply in a Kuwaiti flag.

According to the royal court, the funeral will be “restricted to the emir’s relatives” — a move likely designed to avoid large crowds due to the global health crisis.

Qatar’s ruler Emir Sheikh Tamim bin Hamad Al-Thani — embroiled in a Gulf diplomatic dispute in which Kuwait has mediated — arrived in Kuwait to take part in the funeral processions, according to official Qatari media.

Sheikh Sabah earned a reputation as a shrewd, unshakeable leader who helped steer his country through the 1990 Iraqi invasion, crashes in global oil markets and upheavals in parliament and on the streets.

World leaders and Kuwaitis alike have hailed the legacy of the late emir, architect of the nation’s modern foreign policy and mediator in some of the worst crises to grip the Gulf.

“This man was the safety valve of the Arab world, not just for Kuwait,” Bandar al-Dahani, a Kuwaiti citizen, told AFP.

“God willing, that goodness will be in Crown Prince Sheikh Nawaf and he will follow the emir’s path.”

Generational transition looms
Sheikh Nawaf, who has held high office for decades but earned a reputation for modesty, was visibly emotional as he addressed the National Assembly.

“I promise you that I will do my best and everything in my power to preserve Kuwait, its security and stability, and to ensure the dignity and well-being of the people,” he said after taking the oath of office.

He called for unity in facing the region’s challenges and committed himself to Kuwait’s “democratic approach” in the address before lawmakers, who were spaced out and wore masks in line with coronavirus precautions.

Kuwait, unlike other Gulf states, has a lively political arena with a fully elected parliament that enjoys wide legislative powers and can vote ministers out of office.

Sheikh Nawaf, who was named heir apparent in 2006, takes over as Kuwait faces the repercussions of the coronavirus crisis, which triggered a sharp decline in oil prices and severe economic consequences for Gulf states.

He served as defence minister when Iraqi troops rolled into the oil-rich emirate in 1990, and also as interior minister in the face of challenges from Islamist militants.

Analysts do not expect him to usher in major policy changes, despite historic decisions by Kuwait’s neighbours, the UAE and Bahrain, to establish relations with Israel.

Normalisation with the Jewish state is highly unpopular among the Kuwaiti public, which largely backs the Arab world’s historic position of demanding a resolution of the Palestinian cause before diplomatic concessions to Israel.

Despite expectations of a smooth succession, there could be more spirited debate over who the new crown prince should be.

Kuwait’s constitution stipulates that the ruler should be a descendant of the nation’s founder, Mubarak al-Sabah. By tradition, the throne has for the past four decades alternated between two branches of the family — the descendants of his sons, Salem and Jaber.

However, when Sheikh Sabah, who is from the Jaber branch, ascended to the throne in 2006, he named his half-brother as his heir, sidelining the Salem branch.

“Sheikh Nawaf al-Ahmed should be viewed more as a caretaker than as a watershed new leader,” said Cinzia Bianco, a research fellow at the European Council on Foreign Relations.

“Behind the scenes, however, younger princes would likely continue to compete to succeed him.”

Business News
‘How investment in infrastructure, competition can aid FDI inflow’
4 hours ago
For Nigeria to tackle its perennial foreign exchange (forex) crisis, the need to invest heavily in infrastructure and adopt competitive policies that would attract Foreign Direct Investment ..
Nigeria
Northwest demands lion share of revenue allocation to states, LGAs
4 hours ago
Seven states from the Northwest, yesterday, asked the Revenue Mobilisation Allocation and Fiscal Commission (RMAFC) to give it lion share of revenue to state and local governments.
Nigeria
Abiodun warns monarchs against conferment of frivolous chieftaincy titles
4 hours ago
Ogun State governor, Dapo Abiodun, has urged traditional rulers in the state to be mindful of what they say and the people they honour with chieftaincy titles not to bring the royal institution into disrepute.
Opinion
Why the naira is on free-fall
4 hours ago
The persistent free-fall of the naira is an indication that none of the interventions being applied by the monetary authorities has worked. Otherwise, there would have been some respite for the beleaguered currency, even minimally.
Business News
Manufacturers decry FX, electricity pricing challenges
4 hours ago
As the Federal Government, in Abuja, harped on diversification of foreign exchange sources through export of manufacturing products yesterday investors in the country’s manufacturing value...

Nigeria
Immigration officer to face prosecution for assault on colleague
5 hours ago
The Directorate of Public Prosecutions (DPP), Ministry of Justice, Lagos State has recommended that an immigration officer, Umar Mohammed be prosecuted for allegedly assaulting his colleague, Badiru Olayemi Oluwafemi.

Nigeria
Family of 65-year-old woman attacked in Delta, seeks justice
5 hours ago
Family of a 65-years-old woman, Mrs. Joy Biosah, who was allegedly shot by one, Mr. Agi Nwaicha, has called on Delta State Government and security agencies to ensure that justice is served in the matter.

Nigeria
Revenue sharing formula: Kano demands one per cent allocation, increase for states, councils
1 day ago
Kano State Government has made case for a one per cent special status allocation from the Federal Revenue Allocation Formula.