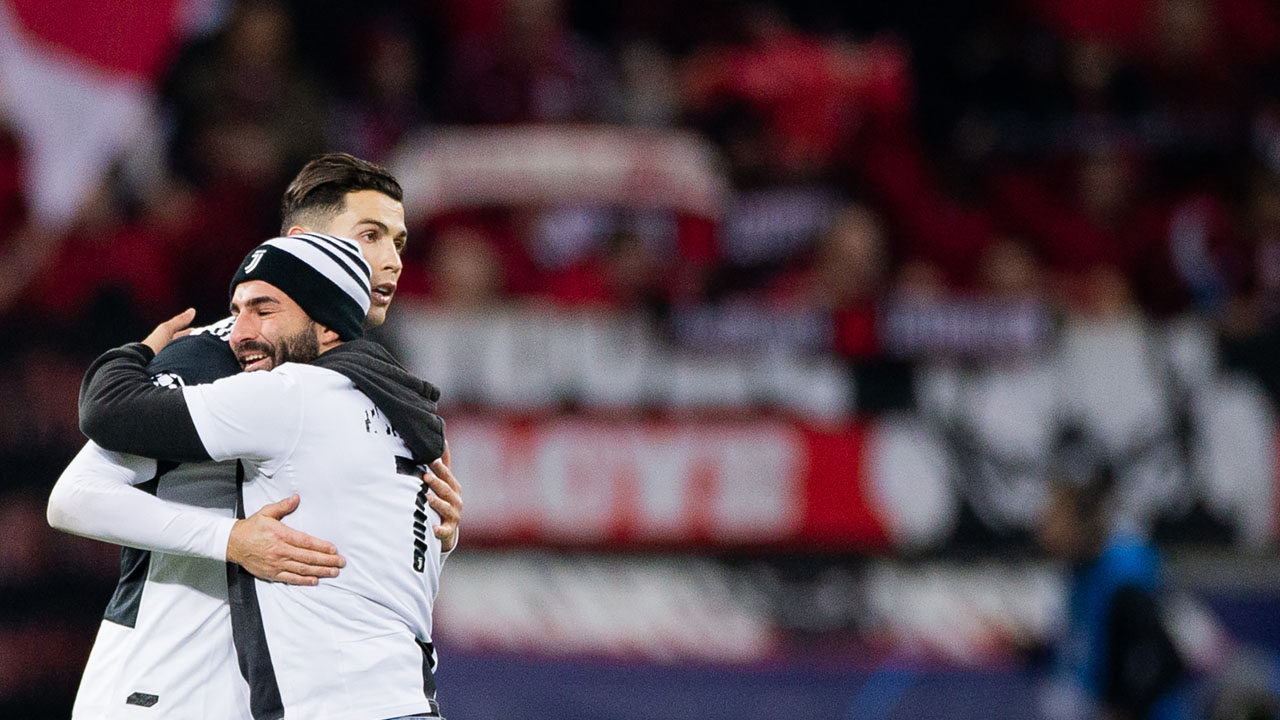 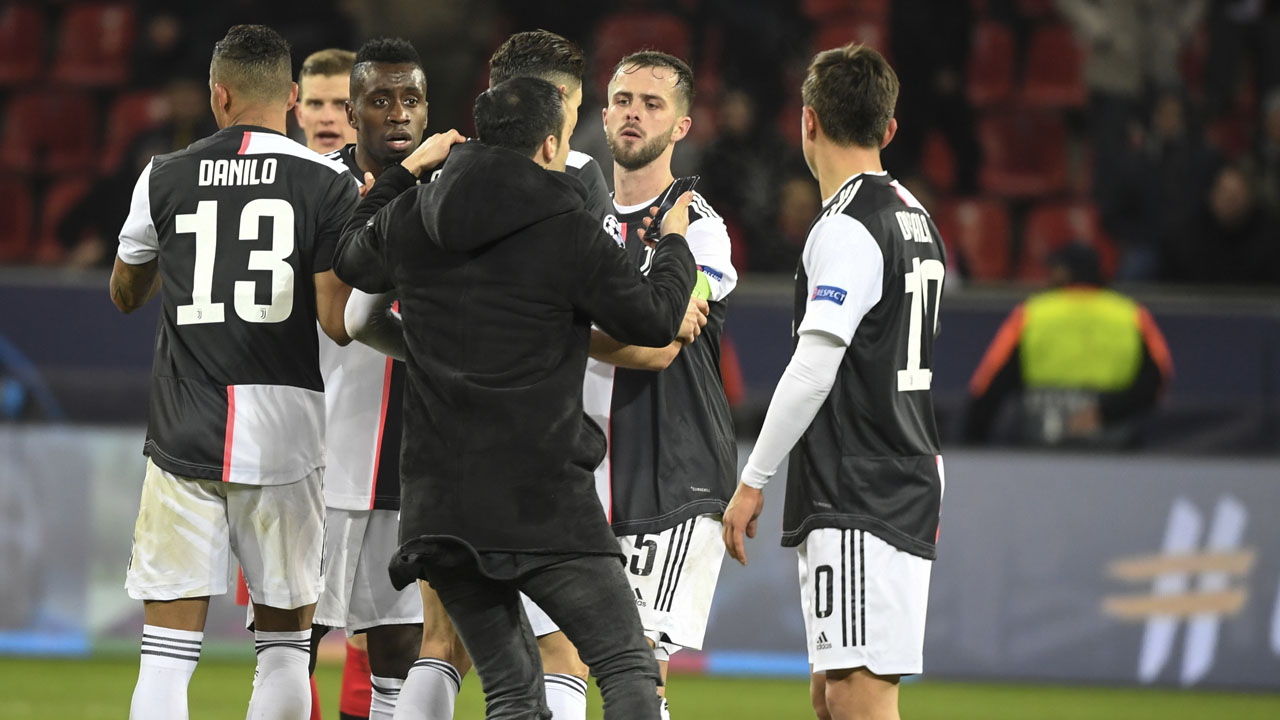 Cristiano Ronaldo was confronted by two pitch invaders, including one seeking a selfie, after Juventus defeated Bayer Leverkusen 2-0 in the Champions League on Wednesday.

Firstly, the Portuguese star was confronted by a supporter who wanted to embrace and congratulate him on his goal-scoring performance.

Just moments later, a second supporter, dressed all in black, sprinted across the BayArena pitch to snap a selfie.

An angry Ronaldo pushed the fan away before security staff intervened.

Ronaldo scored his second Champions League goal of the season for Juve who were already sure of the top spot in Group D and a spot in the last 16.

Substitute Paulo Dybala was the creator of the 75th-minute opener, crossing low for Ronaldo to tap in a record-extending 128th goal in the competition, before Gonzalo Higuain’s injury-time clincher for the Italian giants.

Sport
Chelsea survive Southampton shootout, Arsenal see off Leeds
43 mins ago
Chelsea needed a penalty shootout for the second consecutive round to reach the quarter-finals of the League Cup as they edged past Southampton, while a much-changed Arsenal beat Leeds 2-0 on Tuesday.
Nigeria
Osun State pensioners protest against unpaid pensions
2 hours ago
Pensioners in Osun State on Tuesday trooped to the streets in Osogbo to stage a peaceful protest over unpaid pensions arrears by the state government.
Nigeria
Fani-Kayode files counter-affidavit to estranged wife’s N800m claim
3 hours ago
Mr Femi Fani-Kayode, former Minister of Aviation, has joined issues with his ex-wife, Precious Chikwendu, at the Federal High Court, Abuja.
AMA Press Releases
Crystal Ventures leverages SAP S/4HANA to transform business processes across group companies
4 hours ago
NAIROBI, Kenya, October 26, 2021 -/African Media Agency(AMA)/- A lack of automation can undermine an organisation’s efforts for greater efficiency and profitability and leave decision-makers blind to real-time information about the business. Data suggests up to 22% of a typical employee’s time is spent on repetitive tasks, with up to 10 errors per 100 steps in manual…
AMA Press Releases
MEDIA ADVISORY | October 29 Digital Press Briefing with U.S. Representative to the United Nations, Ambassador Linda Thomas-Greenfield
4 hours ago
EVENT: Please join us on Friday, October 29, 2021, for a digital press briefing with U.S. Representative to the United Nations, Ambassador Linda Thomas-Greenfield. Ambassador Thomas-Greenfield will discuss her trip to Mali, Niger, and Gabon. DETAILS: Speaker: Ambassador Linda Thomas-Greenfield, U.S. Representative to the United NationsDate: Friday, October 29, 2021Time: 11:30 Johannesburg | 10:30 Libreville | 09:30 GMT |…

Sport
West Ham, Everton battle for Perisic’s signature
18 hours ago
West Ham and Everton are ready to battle it out for experienced Inter Milan winger, Ivan Perisic. The 32-year-old Croatian is out of contract at the San Siro next June and Spanish outlet Fichajes...

Sport
Betting Favourites For The Africa Cup of Nations
1 day ago
The rearranged Africa Cup of Nations (AFCON) will get underway in January, with the champions crowned following the final on February 6th. Players for the African nations involved would have been checking the latest Nigeria news to see updates regarding when the competition would be taking place, as it was previously due to take place…

Sport
Italian FA to probe Roma fans' racist chant at Victor Osimhen
10 hours ago
The Italian Football Federation said Monday that it will be investigating a racist chant directed at Victor Osimhen by Roma fans during their goalless draw with Napoli at the weekend. The FIGC said in its statement that a "racially-motivated discriminatory chant" was aimed at Nigeria striker Osimhen, and that its disciplinary authorities would be conducting…

Sport
PSG midfielder Verratti to miss four weeks with hip injury
6 hours ago
Paris Saint-Germain and Italy midfielder Marco Verratti faces four weeks out after injuring his hip during the 0-0 draw with Marseille at the weekend, his club said Tuesday.

Sport
FIFA slams 2-year ban on Cofine FC coach, NFF says
7 hours ago
The coach of Cofine Football Club of Uyo in Akwa Ibom, Remi Amadi, has been slammed with a global ban of two years from all football-related activities.

Sport
Chelsea survive Southampton shootout, Arsenal see off Leeds
43 mins ago
Chelsea needed a penalty shootout for the second consecutive round to reach the quarter-finals of the League Cup as they edged past Southampton, while a much-changed Arsenal beat Leeds 2-0 on Tuesday.