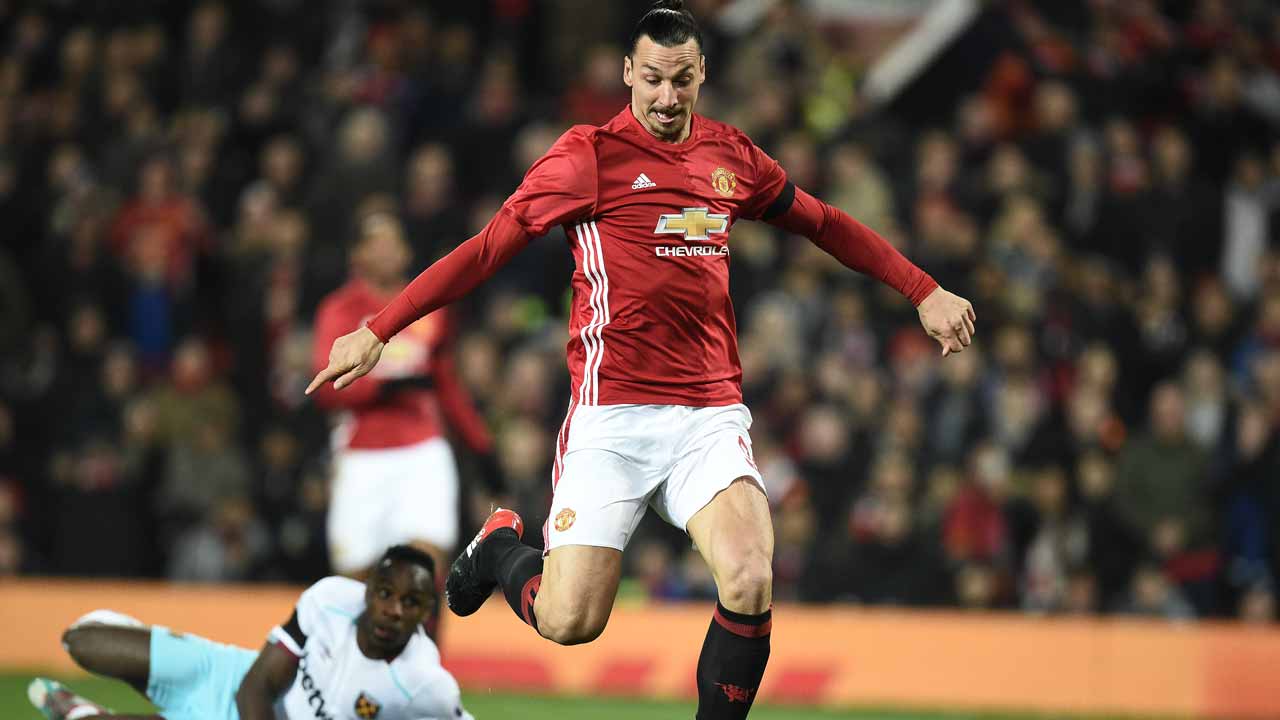 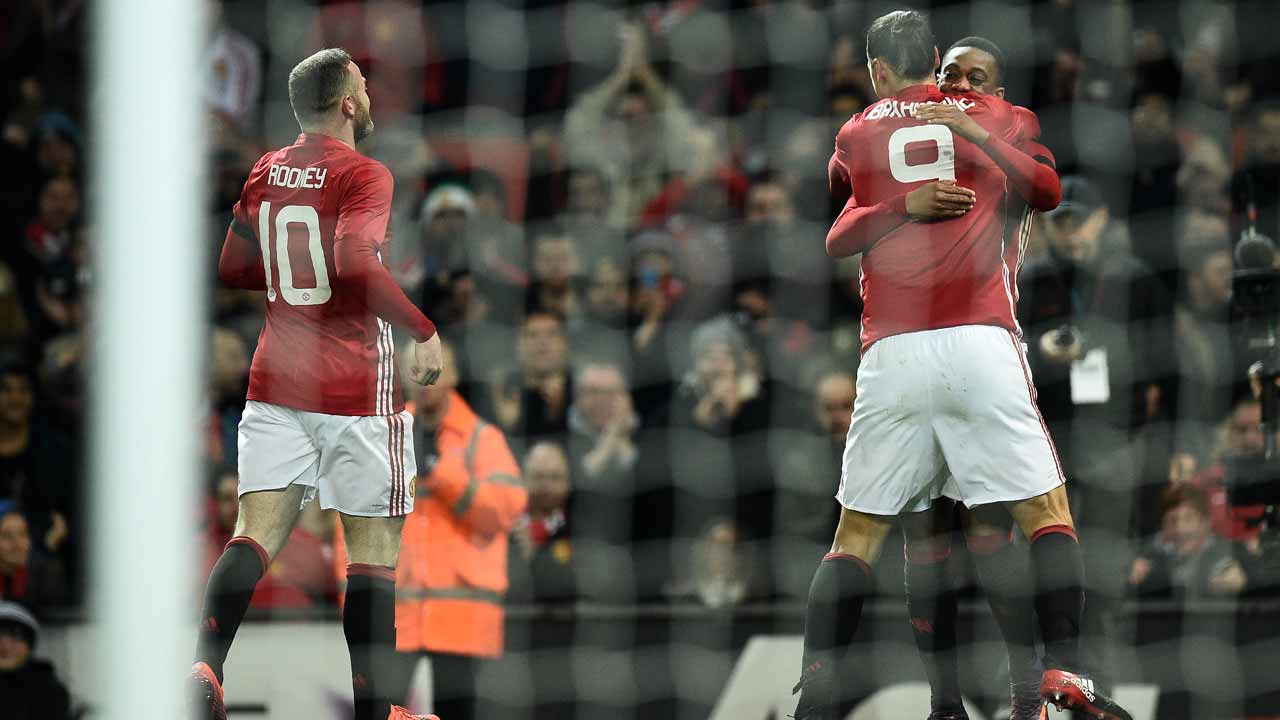 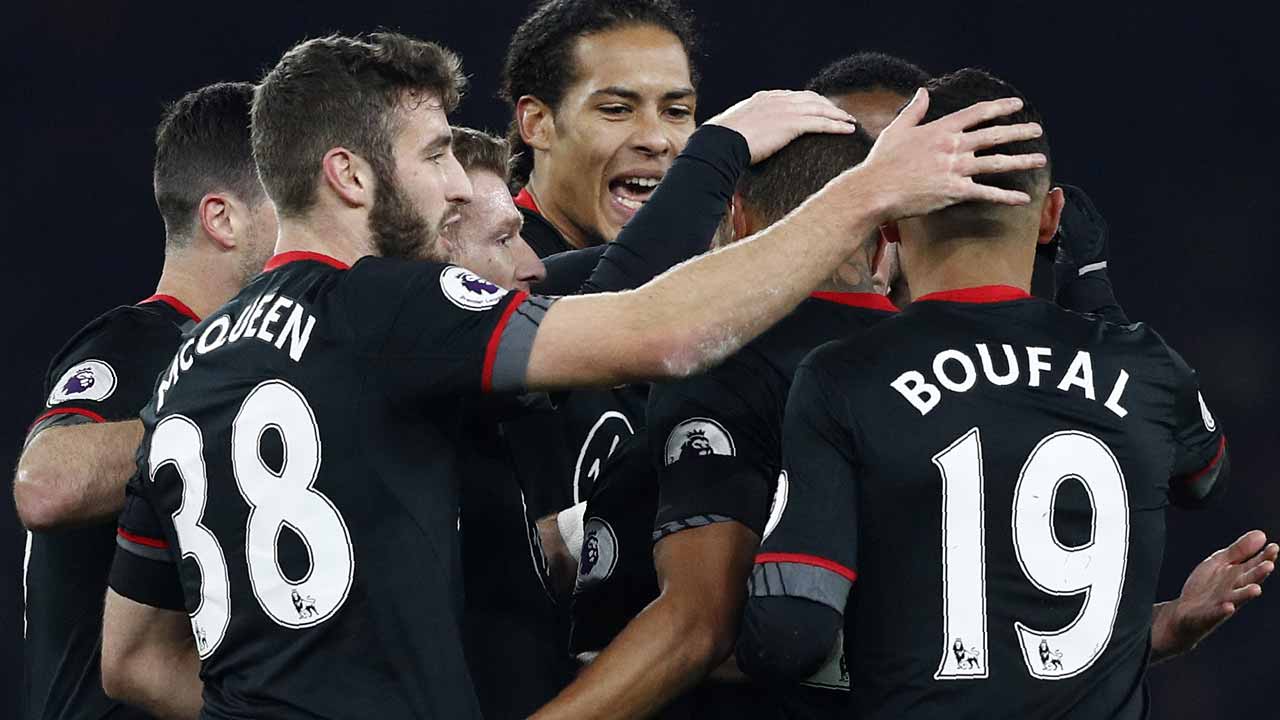 United manager Jose Mourinho served a one-game touchline ban after his dismissal for kicking a water bottle during Sunday’s 1-1 Premier League draw against West Ham, but his absence had no ill-effects.

Ibrahimovic put United ahead in the second minute and although Ashley Fletcher equalised, Martial’s second-half brace restored the hosts’ control before the Swede added a fourth goal in added time.

“After the West Ham goal we had 10 minutes where we felt it deeply. West Ham’s first shot, they equalise,” said Mourinho, who has overseen United’s worst start to a top-flight season since 1989.

“But in the second half we got the confidence to play and play beautiful, attacking football.

United will play Hull City in the two-legged semi-finals, while Southampton’s reward for winning 2-0 at the Emirates Stadium was a last-four encounter with Jurgen Klopp’s Liverpool.

The game at Old Trafford notably saw Bastian Schweinsteiger make his first appearance of the season for United as a late substitute.

The former Germany captain has only recently returned to the first-team squad after being frozen out by Mourinho and received a huge ovation as he came on.

West Ham had needed less than two minutes to take the lead in Sunday’s game, but on this occasion United were the early birds.

West Ham levelled in the 35th minute with a bolt from the blue as David de Gea spilled Dimitri Payet’s shot and former United youngster Fletcher tucked in his first senior goal in front of the Stretford End.

Fortunately for United, they started the second half as sharply as they had attacked the first, a move down the right culminating in Mkhitaryan squaring for Martial to sweep home.

Rooney ban
West Ham’s cause was not helped by the fact they lost both wing-backs, Aaron Cresswell and Michail Antonio to injury, and in the 62nd minute they found themselves 3-1 down.

Ibrahimovic was the architect with a fine pass down the inside-right channel for Antonio Valencia, whose cross was tapped in by Martial.

Ibrahimovic doubled his tally in the 93rd minute, slotting in Ander Herrera’s low cross from the left.

The only source of regret for United was a booking for Rooney that rules him out of Sunday’s trip to Everton, nixing his hopes of scoring a club record-equalling 249th goal against his old side.

Arsenal manager Arsene Wenger had been hoping to win the competition for the first time, but instead his decision to make 10 changes backfired as Southampton ended his side’s 19-game unbeaten run.

“I enjoy this win for all of the squad and for the fans, because it’s a good answer to keep all of our possibilities in every competition,” said Southampton manager Claude Puel.

“We played a very good game and to qualify for the next round is very important. We now get to play in a semi-final and that’s great for the players.”

Mohamed Elneny was the only player to have kept his place from Arsenal’s 3-1 win over Bournemouth on Sunday, but he succumbed to illness before half-time and was replaced by Granit Xhaka.

It was Arsenal’s first defeat since a 4-3 loss at home to Liverpool on the opening weekend of the Premier League season.

“We didn’t have enough urgency in the first half,” said Wenger.

“We were weak in some departments and we paid for that.”

News
Tobi Adegboyega's wealth creation campaign to raise 100 millionaires
NOW
The wealth creation campaign of philanthropist Pastor Tobi Adegbeyoga is forging ahead with plans to raise 100 millionaires by the end of 2022. Over the years, Adegboyega has a proven track record of creating successful multi-millionaires globally. He has spent well over 17 years building communities and raising leaders in London, especially, many of whom…
What's New
Seun Kuti cancels Morocco gig over migrant deaths
2 hours ago
Seun Kuti, son of Afrobeat legend Fela Kuti, has cancelled a concert in Morocco to mourn last week's tragedy on the border of Spain's Melilla enclave in which at least 23 African migrants died. Saxophonist and singer Kuti had been set to play on Saturday at the Jazzablanca festival in the Moroccan port city of…
World
Protesters rally in Spain, Morocco over migrant deaths
2 hours ago
Demonstrators held rallies in several Spanish cities and in Rabat late Friday to protest over the deaths of 23 African migrants who died in a crush trying to enter the Spanish enclave of Melilla in northern Morocco. Thousands of protesters gathered in Barcelona, Malaga, Vigo and San Sebastian and in Melilla itself to denounce migration…
World
One killed, six injured in Serbia migrant shootout
3 hours ago
One migrant was killed and at least six others, including a teenage girl, were injured Saturday in a shootout between migrant groups in Serbia near the Hungarian border, the state-run RTS television reported. The 16-year-old girl sustained life threatening injuries in the incident that occurred in a forest in the outskirts of Subotica, some 160…
Guardian Life
How To Make A Healthy Chicken Wrap
3 hours ago
Are you planning to switch to a healthy diet? A great breakfast snack to include is a chicken wrap. Not only is it packed with healthy goodness, but it is also a delicious meal you can enjoy at any time of the day.  Need to make a healthy chicken wrap? This is the recipe you…

Sport
Lack of pressure allows stumbling Real Madrid to stay in charge in La Liga
25 Feb
Real Madrid has been allowed to keep a commanding lead at the top of La Liga, despite a dip in form that has set nerves jangling about another second half of the season slide under Carlo Ancelotti.

Sport
Manchester United shortlist Osimhen to booster attack
2 Mar
Super Eagles’ Striker, Victor Osimhen’s star has continued to rise. The 2015 U-17 World Cup winner, who moved from Lille of France to Italy’s Napoli for €75 million, has been earmarked by English giants, Manchester United, as the likely solution to their goal scoring problems, and therefore, a target for the summer transfer window.

Sport
PSG to 'try everything' to keep Mbappe from clutches of Madrid
4 Mar
Paris Saint-Germain sporting director Leonardo says the club will do "everything" in its power to extend Kylian Mbappe's contract as Real Madrid threaten to prise him away on a free transfer.

What's New
'Living legend' Zlatan Ibrahimovic Comes To The Silver Screen
18 Mar
Even though he's still an active player, a new film premiering Friday is attempting to tell the story of Swedish footballer Zlatan Ibrahimovic by focusing on the star's childhood growing up in a poor part of the city of Malmo.