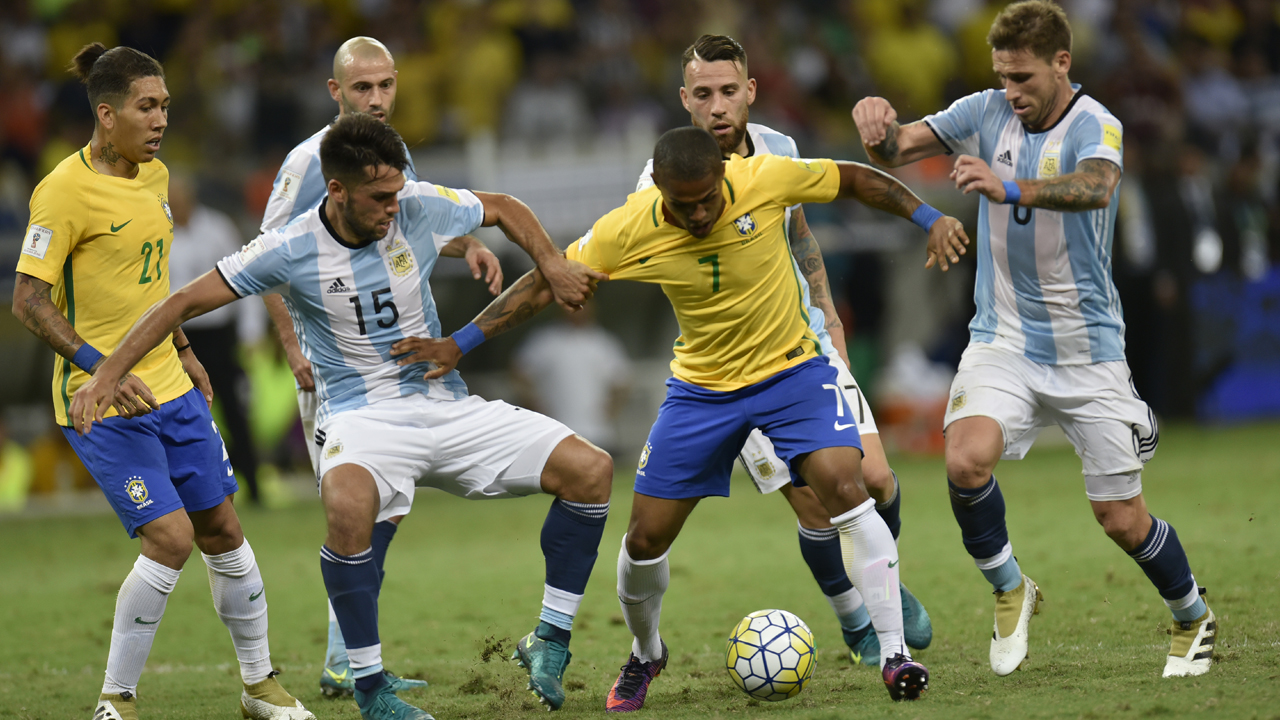 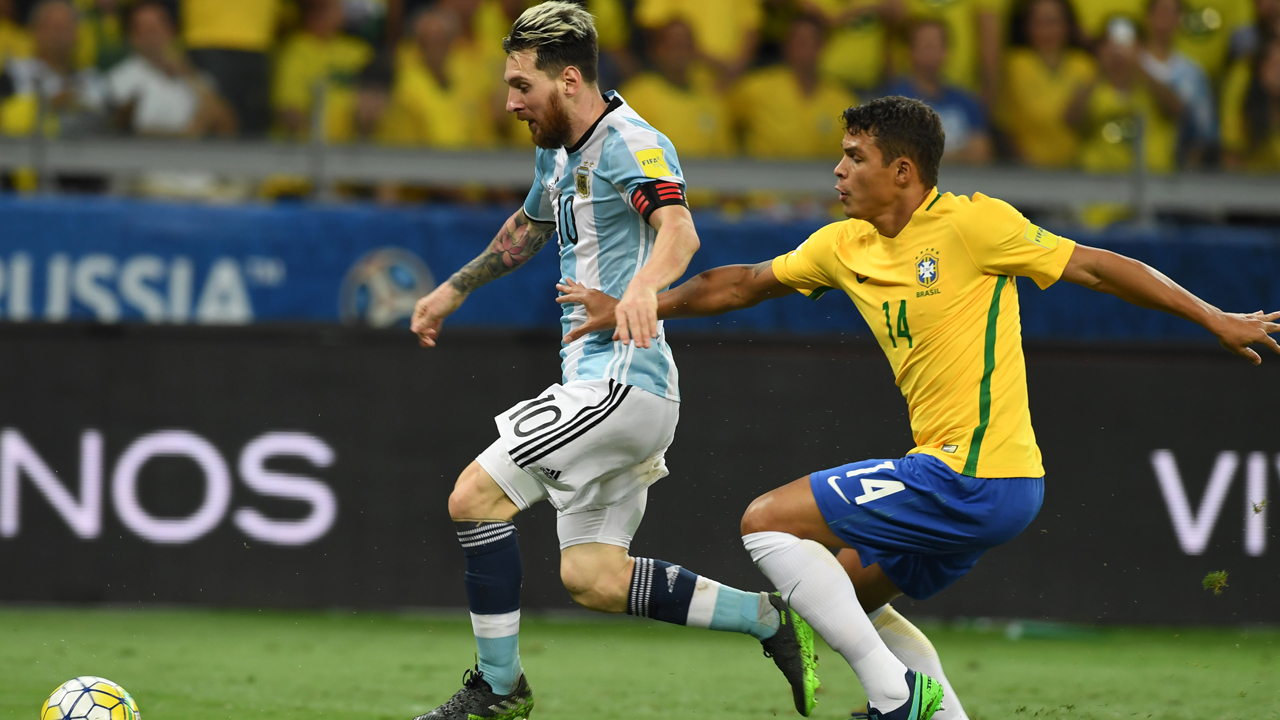 Brazil thrashed arch-rivals Argentina to tighten their grip on South America’s 2018 World Cup qualification campaign on Thursday as Uruguay maintained their push towards the finals with a hard-fought defeat of Ecuador.

Barcelona superstar Neymar outshone club-mate Lionel Messi with his 50th international goal for Brazil in Belo Horizonte as the five-time World Cup winners romped to a 3-0 win in the Estadio Mineirao.

It was a sweet return to the venue for Brazil, who were humiliated 7-1 at the same ground by Germany in the semi-finals of the 2014 World Cup.

Neymar’s landmark strike was sandwiched by a spectacular effort from Liverpool’s Philippe Coutinho and a second-half finish from China-based midfielder Paulinho.

The win was a remarkable fifth consecutive qualifying victory under the reign of new coach Tite, who took over following the sacking of Dunga in June after Brazil’s Copa America Centenario debacle, when they failed to advance from the group stage.

Brazil now have 24 points from 11 games, one clear of second-placed Uruguay who have 23 points.

Argentina meanwhile are languishing outside the qualifying places in sixth with 16 points.

The two-time world champions — who have taken just two points from their past four qualifiers — now face a crucial game at home to Colombia next Tuesday which they must win to avoid falling further off the pace.

“We’re down but we’re still alive,” Argentina captain Messi said. “We have to forget the situation we’re in and start thinking about Colombia. If we get a result against Colombia it will make things look a lot different.”

Argentina manager Edgardo Bauza meanwhile admitted he had not expected to lose so heavily.

“It’s a hard defeat. I did not think we would lose 3-0, I thought it would be an even game,” Bauza said. “But when they got their second it was all over.”

Uruguay meanwhile stayed firmly on Brazil’s shoulder with a 2-1 defeat of Ecuador at Montevideo’s Estadio Centenario.

The Uruguayans took the lead on 12 minutes when former Liverpool defender Sebastian Coates bundled in a corner from close range for his first international goal.

Espanyol striker Felipe Caicedo then rounded off a sweeping Ecuador counter-attack to equalise just before half-time.

But Uruguay responded immediately, Diego Rolan stabbing home a low finish on the stroke of half-time to restore the home side’s lead.

– Injury scare for Bravo –
Elsewhere Thursday, Copa America Centenario champions Chile had captain and goalkeeper Claudio Bravo to thank for a hard-earned point in a 0-0 draw against Colombia in Barranquilla.

But Bravo’s display was tempered by an injury which forced the Manchester City goalkeeper off the field midway through the second half.

Bravo had earlier produced two fine blocks to deny Oscar Murillo and Miguel Borja as Colombia were struggled to break the deadlock.

Colombia’s Argentinian coach Jose Pekerman bemoaned a lack of precision in front of goal but was buoyed by the return of talismanic striker Radamel Falcao, who was introduced as a half-time substitute.

“We tried everything and we had chances but we lacked precision,” Pekerman said.

“But the most important fact of the game was the return of Falcao.”

In other games, Paraguay suffered a 4-1 mauling against Peru in Asuncion to derail their qualification campaign.

Paraguay took an early lead through Cristian Riveros after nine minutes but Peru hit back with second-half goals from Christian Ramos, Edison Flores, Christian Cueva and an Edgar Benitez own goal to run out convincing winners.

“We’re still in the race to qualify,” Arce said. “We don’t think we’re dead, we just need to pick ourselves up and get on with it,” he added.

Paraguay, who are two points outside the qualifying positions, face Bolivia away in their next game.

Venezuela meanwhile scored their first win of the qualifiers with a 5-0 thrashing at home to Bolivia, with Josef Martinez scoring a hat-trick.

Nigeria
2023 poll: Ayu's refusal to resign costly to Atiku's chances, says Nkire
19 mins ago
All Progressives Congress, APC, chieftain, Chief Sam Nkire says the refusal by the national chairman of the people's democratic party (PDP), Dr Iyorchia Ayu to resign would surely affect the chances of the presidential candidate of the party, Atiku Abubakar in the 2023 poll.
Nigeria
WTD: No tribe in Nigeria can survive alone – Lai Mohammed
44 mins ago
Alhaji Lai Mohammed, Minister of Information and Culture, says that no one culture in Nigeria can survive alone.
Nigeria
NOA flag-off women's mobilisation for 2023 polls
48 mins ago
As Nigeria prepares for the 2023 general election, National Orientation Agency (NOA), on Monday, unveiled a campaign for women's participation in politics to seek the removal of marginalisation syndrome on the feminine gender.
Nigeria
TCN restores national grid after partial collapse
1 hour ago
The Transmission Company of Nigeria (TCN) says it has restored the national grid after its partial collapse on Monday.
Nigeria
Metuh's alleged N400m money laundering case not struck out - EFCC
1 hour ago
Economic and Financial Crimes Commission (EFCC) has described as false reports that the N400 million money laundering case against former National Publicity Secretary of the Peoples Democratic Party (PDP), Olisa Metuh had been struck out.

Sport
Chelsea's Tuchel frustrated by 'noise' after Lukaku voices dissatisfaction
31 Dec 2021
Thomas Tuchel admitted on Friday that he was frustrated with the "noise" around Romelu Lukaku's situation at Chelsea after the Belgium forward expressed his dissatisfaction with his role at the club.

Sport
Southampton-Newcastle match postponed due to Covid
31 Dec 2021
Southampton's home match against Newcastle on Sunday is the latest Premier League fixture to be called off after a coronavirus outbreak in the visitors' camp.