By APO Group
Share on Facebook Share on Twitter Share on WhatsApp Share on Telegram
PATHE BC AFRIQUE, theatrical release company in Francophone Africa and APO Group (www.APO-opa.com), the leading communications consultancy and press releases in Africa, announced today a partnership to support the release of ABOVE WATER. This is the first feature film as a director for the actress Aïssa Maïga. Watch the trailer: Marcher sur l'eau - Bande-annonce… 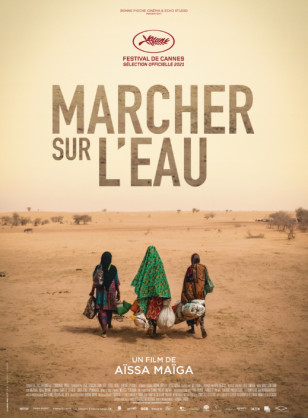 PATHE BC AFRIQUE, theatrical release company in Francophone Africa and APO Group (www.APO-opa.com), the leading communications consultancy and press releases in Africa, announced today a partnership to support the release of ABOVE WATER. This is the first feature film as a director for the actress Aïssa Maïga.

With this collaboration, the first of its kind, APO Group becomes the official partner of the release of ABOVE WATER in Francophone Africa, on November 10th, 2021, in North Africa and November 12th in Sub-Saharan African countries.

A victim of global warming, the village of Tatiste in northern Niger is trapped in a constant struggle for water. Every day, 14-year-old Houlaye and other children walk many kilometres to fetch water, which the village needs to survive. This daily task makes regular school attendance impossible. The lack of water also drives adults to leave their families each year and cross the borders in search of resources for their livelihood. Yet, beneath this region lies an aquifer spanning several thousand square kilometres. Drilling a well would bring precious water to the centre of the village and ensure a better life for everyone…

ABOVE WATER arrives in cinemas crowned with an official selection during the Cannes Film Festival 2021, within the section “CINEMA FOR THE CLIMATE” and will be in official competition (documentary section) during FESPACO 2021, which will be held from October 15th to 23rd in Ouagadougou, Burkina Faso.

ABOVE WATER is a film that aims to raise awareness of a major social issue: access to water. About 2.2 billion people worldwide do not have direct access to drinking water. Every day, 10,000 people die due to lack of water or an illness caused by ingesting contaminated water (cholera, dysentery, typhoid and even polio). Niger, a semi-desert country at the heart of Sub-Saharan Africa, is representative of the problem, but also promising. On the one hand, it has been hit hard by climate change and repeated drought. On the other hand, it is one of the places in the world where the fight by rural communities and their inhabitants to resolve this problem, with the support of the government, is the most determined and dynamic.

APO Group is renowned as the leading communications consultancy in Africa, and its partnership with Above Water highlights the vast potential of the entertainment industry on the continent.

“For APO Group, this is an opportunity to get involved in a project that raises important questions about the impact of water scarcity on the lives of African people. We also know the film industry in Africa is thriving, and Above Water is a fantastic chance to show new global audiences that African cinema can be both entertaining and thought-provoking,” said APO Group Founder and Chairman Nicolas Pompigne-Mognard (www.Pompigne-Mognard.com).

Together, APO GROUP and PATHE BC AFRIQUE are committed to promote ABOVE WATER to the largest audience and raise awareness about water access and solutions to solve this issue.

Jean-François CAMILLERI, producer of the film via ECHO STUDIO, and PATHE BC AFRIQUE founding partner: “ABOVE WATER is all at once an inspiring documentary, a heartbreaking author’s film and a fabulous tool to educate the audience about the problem of access to water. With APO GROUP, we could not have dreamed of a more powerful partner to help us communicate the values of this film to African audiences and spread the message on the continent.”

Aïssa Maïga, film director: “Above Water is a film that I wanted to be human, full of emotion and above all in the form of an immersion in the life of a West African community. The cinema makes it possible to show the difficulties in everyday life. But I also wanted to give a face to the extraordinary dignity of West African populations in the face of climate change and lack of water.”

Benjamin Reyntjes, Managing Director of Pathé BC Afrique: “It is in the DNA of Pathé BC Afrique to support the diversity of films as well as their accessibility to a large audience.  ABOVE WATER perfectly embodies our desire to support works of high cinematographic quality while offering a strong resonance to an environmental issue. Thanks to her film, Aïssa Maïga proves that it is possible to offer viewers all the beauty and emotions of cinema in a piece of art that is both full of delicacy and loaded with meaning. APO GROUP, a major player in communication in Africa, allows us, through its commitment and this partnership, to promote the film on the continent and to raise public awareness on this fundamental subject.”

Distributed by APO Group on behalf of APO Group.

About APO Group:
Founded in 2007, APO Group (www.APO-opa.com) is the leading pan-African communications consultancy and press release distribution service. We assist private and public organisations in sharpening their reputation and increasing their brand equity in target countries across Africa. Our role as a trusted partner is to leverage the power of media and build bespoke strategies that enable organisations to produce a real, measurable impact in Africa and beyond. The trust and recognition granted to APO Group by global and multinational companies, governments, and NGOs inspires us to continuously enhance our value proposition within Africa to better cater to our clients’ needs.

Sport
Sportsville Awards thrills Yola, Edeh
6 mins ago
Renowned sports administrator, Abba Yola, has commended organisers of the yearly Sportsville Awards, even as Abuja-based women’s football promoter, Paul Edeh, has described the award to be bestowed on him as heartwarming.
What's New
D’Prince Shares Inaugural Monthly Playlists Tagged ‘El Jefe’s Playlist’
1 day ago
D'Prince is also known as El Jefe, a Nigerian Afropop recording artist, entrepreneur and the CEO Jonzing World record label. El Jefe’s monthly playlist is a curation of his favourite songs of the month He shared the inaugural monthly playlist for the month of January which features 10 songs from Ruger, Millionz, Popcaan, Drake, Rema,…
What's New
DJ Neptune Drops A New Single 'Bienvenue' Featuring Ruger
1 day ago
DJ Neptune has dropped a new single titled 'Bienvenue' featuring Ruger. DJ Neptune taps Ruger for a new thrilling single Bienvenue' which comes through with a crisp tune produced by DJ Neptune, Kukbeatz and Choke Boi. The new year is off to a bang with "Bienvenue," a brand-new classic song from DJ Neptune and also…
Politics
Atiku berates Tinubu for hypocritical criticism of APC
1 day ago
The presidential candidate of the Peoples Democratic Party (PDP), Atiku Abubakar, has berated the presidential candidate of the All Progressives Congress (APC), Bola Tinubu, for his hypocritical attempts to extricate himself from the many failures of the ruling party. Atiku’s Special Assistant on Public Communication, Phrank Shaibu, said this in a statement, in Abuja, on…
Nigeria
Anambra: Gunmen set INEC office ablaze, destroy election materials
1 day ago
Gunmen on Tuesday set ablaze the Independent National Electoral Commission (INEC) office in Ogidi, Idemili South Local Government Area, Anambra State, destroying non-sensitive materials for 2023 general elections. The Commission disclosed this in a statement by its Commissioner and Chairman, Information and Voter Education Committee, Festus Okoye, in Abuja on Wednesday. Okoye said that the…

Sport
Sportsville Awards thrills Yola, Edeh
6 mins ago
Renowned sports administrator, Abba Yola, has commended organisers of the yearly Sportsville Awards, even as Abuja-based women’s football promoter, Paul Edeh, has described the award to be bestowed on him as heartwarming.
APO Press Releases
United States Embassy & Al-Azhar Institutes Celebrate First-Ever National Spelling Bee Competition in Egypt
2 hours ago
Download logoOn February 1, 2023, the U.S. Embassy in Cairo, in partnership with Al-Azhar Institutes, held the finals for the first-ever Al-Azhar National Spelling Bee Competition. Over 300,000 kindergarten, primary, middle, and secondary school students from all governorates of Egypt participated in the spelling bee at the local, district, governorate, regional, and national levels. At…
APO Press Releases
Qatar: Spokesperson for Ministry of Foreign Affairs Meets United Kingdom (UK) Special Envoy to the Horn of Africa and Red Sea
2 hours ago
Download logoAdvisor to the Deputy Prime Minister and Minister of Foreign Affairs and Spokesperson for the Ministry of Foreign Affairs Dr. Majed bin Mohammad Al Ansari met Wednesday with HE UK Special Envoy to the Horn of Africa and Red Sea Sarah Montgomery. During the meeting, they discussed the latest developments in the Horn of…

APO Press Releases
Fake medicines kill almost 500,000 sub-Saharan Africans a year: United Nations Office on Drugs and Crime (UNODC) report
2 hours ago
A lack of access to healthcare and medicines has been fuelling a host of opportunists aimed at filling the gaps, the report Trafficking in Medical Products in the Sahel shows. But, this supply and an imbalance in demand, has triggered deadly results. Bitter pill of trafficking In sub-Saharan Africa, as many as 267,000 deaths per year are linked to…

What's New
DJ Neptune Drops A New Single 'Bienvenue' Featuring Ruger
1 day ago
DJ Neptune has dropped a new single titled 'Bienvenue' featuring Ruger. DJ Neptune taps Ruger for a new thrilling single Bienvenue' which comes through with a crisp tune produced by DJ Neptune, Kukbeatz and Choke Boi. The new year is off to a bang with "Bienvenue," a brand-new classic song from DJ Neptune and also…