By APO Group
Share on Facebook Share on Twitter Share on WhatsApp Share on Telegram
An estimated 6.3 million children aged 6-59 months will suffer from wasting in six Sahel countries[1] in 2022, putting the lives of at least 900,000 children at risk, warns the West and Central Africa Nutrition working group. The group is calling on donors and partners to urgently increase their support to respond to the immediate… 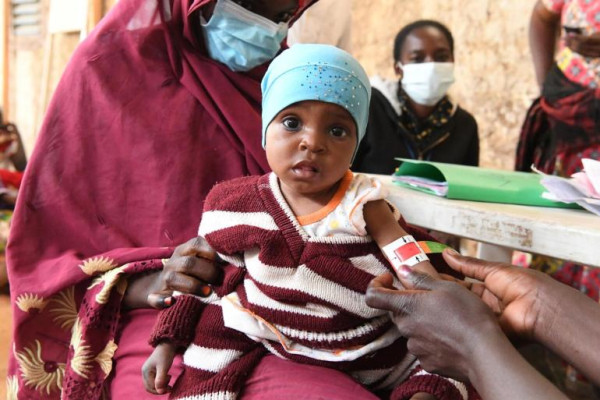 An estimated 6.3 million children aged 6-59 months will suffer from wasting in six Sahel countries[1] in 2022, putting the lives of at least 900,000 children at risk, warns the West and Central Africa Nutrition working group. The group is calling on donors and partners to urgently increase their support to respond to the immediate nutrition needs of the affected children while intensifying preventive interventions to address the root causes of child malnutrition in the region.

The number of under-5 children expected to suffer from global acute malnutrition this year has never been so high, showing an increase of 27 per cent as compared to 2021 and 62 per cent as compared to 2018, reaching for the fifth year in a row a record high level, according to a new publication from the West and Central Africa Nutrition working group, gathering United Nations agencies and non-governmental organizations, including ACF, ALIMA, Concern, PUI, Save the Children, UNICEF, WFP and WHO.

“As conflicts, insecurity, socio-economic crisis and recurrent extreme climatic events in the region continue to deteriorate and further aggravate the nutrition of children, we need to shift to ‘business unusual’ to address their needs in a sustainable way”, said Marie-Pierre Poirier, UNICEF Regional Director for West and Central Africa. “While treatment remains an imperative to save the lives of children most severely affected, we must shift the paradigm and focus on scaling interventions to prevent malnutrition, especially in the most affected locations. The time has come to address the root causes of malnutrition of children in the region with determination and urgency. Recurrent crises over the past decade call on us to accelerate efforts and to seize opportunities to re-imagine nutrition with our partners in Governments and with the critical support of donors so that collectively, we put the region on the right trajectory to protect all children against malnutrition”.

What is needed is a multi-sectoral approach to address the multiple underlying vulnerabilities such as widespread food insecurity, inadequate dietary and care practices for infants and young children, inadequate maternal nutrition, high incidence of childhood illnesses, inadequate access to water and sanitation and health services, gender and other social norms, all interoperating on ground marked by widespread poverty. A focus on adolescent girls is key to break the inter-generational cycle of malnutrition.

The data for the prevention of wasting among children aged 6-23 months and pregnant and lactating women through supplementary feeding in nine countries[2] in the region also show that funding is required to ensure an efficient and timely response. The total funding requirement is $93.4 million, with a funding shortfall of $56.2 million, including $26.3 million to cover the needs during the lean season from June to September. For treatment of wasting, the funding shortfall is $35.5 million for moderate wasting and $42 million (including Nigeria) for severe wasting, the most life-threatening form of malnutrition. Longer-term and flexible investments for nutrition are required to sustainably address the financing issues, and this should include increased domestic investments by Governments.

“And now the Ukraine crisis is leading to an inflation of the food prices, increasing the pressure on the populations already heavily impacted by the crises: a severe food and nutrition insecurity is near if we do not act now in all the hot spots”, said Mamadou Diop Regional Representative Action Against Hunger for West and Central Africa.

Dietary diversity among young children is a major challenge in West and Central Africa, with only 21 per cent of children 6-23 months receiving the minimum number of food groups to grow well. There is a need to anticipate a probable increase in supply needs as well as in costs of food and nutrition supplies and to identify local solutions to affordable nutritious diets. This can be achieved through partnerships with women’s cooperatives and women empowerment initiatives, youth engagement for better community involvement and public-private partnerships. The focus must be put on young children, adolescent girls and pregnant and breastfeeding women.

Over the past three years, the sharp increase in armed attacks on communities, schools, health centres and other public institutions and infrastructure have disrupted livelihoods and access to social services including education and health care. Insecurity and adverse climatic events further aggravate an already fragile and precarious situation, leading to massive populations displacement. As of end 2021, more than 2.5 million people were internally displaced in the Central Sahel.

In addition, the COVID-19 pandemic continues to have adverse effects on household livelihoods as well as systems (food, health, education, social protection). The crisis in Ukraine could lead to prolonged reduction in food exports and increase the number of undernourished people in Sub-Saharan Africa, according to FAO estimates.

Distributed by APO Group on behalf of UNICEF West and Central Africa.

AMA Press Releases
Bybit Announces $100 Million Support Fund for Institutional Clients
8 mins ago
Bybit looks to Kickstart Crypto Market with short-term stimulus package  DUBAI, United Arab Emirates, 28 November 2022 -/African Media Agency(AMA)/- Bybit, the world’s third most visited crypto exchange, has announced the launch of a $100 million support fund to shore up institutional market makers during this challenging period in the crypto industry.  The fund will offer a…
AMA Press Releases
Tia goes back to the beginning of her journey, was it just a dream?
8 mins ago
Episode 5 of “Goodbye Princess” animation series   “ Temptation Apple ” – Will the princess accept the prince’s kiss?  HONG KONG, SAR, 28 November, 2022,-/African Media Agency (AMA)/- In the fifth episode of “GOODBYE PRINCESS” animation series, Asian global fashion icon, C-pop singer, film and television actress — Tia Lee (Tia Lee Yu Fen) takes a bite…
World
Six years after bombings, Belgium readies for biggest trial
16 mins ago
Belgium's worst peacetime massacre left 32 dead and hundreds marked for life. Now, six and a half years later, Brussels will host its biggest-ever criminal trial.
Sport
'It's normal - it's Kudus': Ghana youngster lights up World Cup
29 mins ago
Mohammed Kudus announced himself on the global stage with his brace at the World Cup on Monday to show why he is one of the most coveted young players in football.
Nigeria
Buhari affirms Nigeria’s commitment to restore political stability, security in West Africa
1 hour ago
President Muhammadu Buhari of Nigeria has pledged Nigeria’s commitment to restoring democratic rule to Mali, Guinea and Burkina-Faso, and to ensure peace and political stability in the West African Sub-region.

APO Press Releases
Africa’s Leading Data Analytics Company, Periculum Launches Utambuzi in Kenya
9 mins ago
Utambuzi has launched in Kenya. Utambuzi, which means ‘insights’ or ‘diagnosis’ in Swahili, is a personal finance management product that leverages machine learning to track income and expenses, and plan budgets while providing valuable insights on financial behavior to help users better align their expenses with their financial goals. Also, with this product, there is…