A Journey Into The World Of Nigerian Art

By Oludamola Adebowale
Share on Facebook Share on Twitter Share on WhatsApp Share on Telegram
The history of Nigerian art is fascinating. The dawn of the 15th century saw an explosion inthe art scene. That century saw the death of Iyoba Idia (Queen Mother of Oba Esigie) which occasioned the carving of the famous figurine. The figurine became popular and placed the Benin Kingdom into the world of arts. Other…

The history of Nigerian art is fascinating. The dawn of the 15th century saw an explosion inthe art scene. That century saw the death of Iyoba Idia (Queen Mother of Oba Esigie) which occasioned the carving of the famous figurine. The figurine became popular and placed the Benin Kingdom into the world of arts. Other ancient civilisations also came forth with their different art forms which included but not limited to painting, carving, sculpture and poetry.

The 19th century saw the prominence of arts from the Nok, Benin, Igbo Ukwu, Owo, Esie and Ife artworks. Today, these artworks energise Nigerian creatives to produce works within obvious traditions and practices. It has documented the history of Nigeria with art as that unifying factor that sells the country to the rest of the world.

Names like Uche-Okeke, Yusuf Grillo, Twins Seven-Seven, Ben Enwonwu, Bruce Onobrakpeya, Aina Onabolu, Jimoh Buraimoh, Dele Jegede and Wole Lagunju to mention a few have redefined the contemporary Nigerian art scene. Laying a foundation for study and national development, these individuals have used their arts to promote the image of this country outside its shores.

The Nigerian contemporary art scene draws a lot of imagination and knowledge from tradition. Victor Ekpuk works with the Nsibidi art form. Nsibidi, dating back to the 400 to 1400 CE, is a system of symbols indigenous to the south-eastern part of Nigeria. Wole Lagunju draws his inspiration from traditional masquerades, focussing on the Gelede Masquerade. All this proves one point: art is in constant renewal and redevelopment.

With little or no intervention from the government and major private sectors, Nigerian art has survived against all odds, positioning itself as a force to be reckoned with in the global scene.

If supported and structured, the potential of the Nigerian art sector as a major source of income to the country’s economy is assured. Establishment of art centres for learning both theory and practice would give young talents a space to sharpen their craft and empower them to put their talents to good use. Provision of creative spaces will help emerging artists to create more artworks, study and also allow people in and outside the country to come and view their artworks.

A pair of Yoruba twin figures, Oke Onigbin or Esie. …to Lempertz 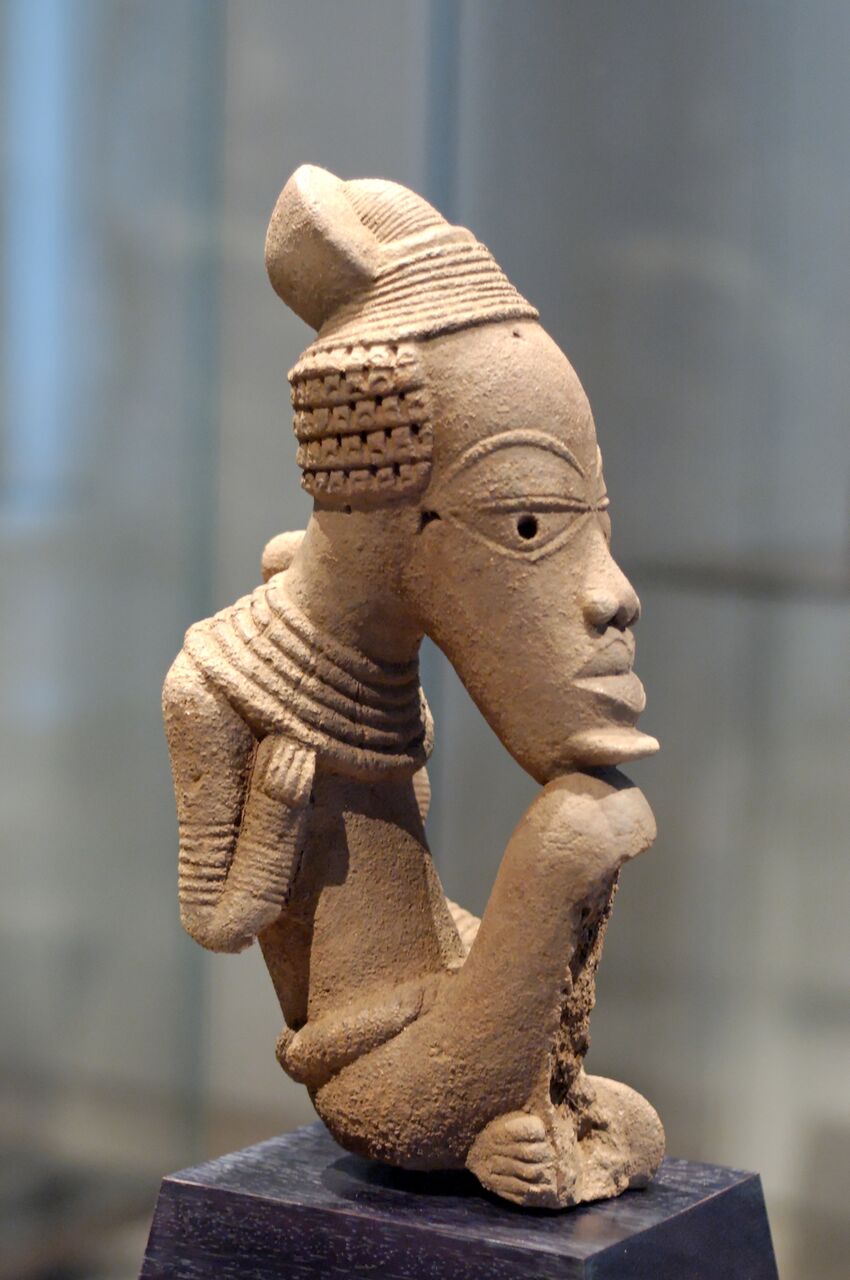 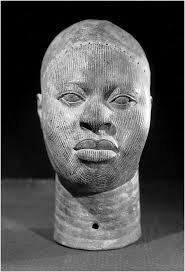 Culture
Aleko Fassianos “Greek Picasso” Dies Aged 86
3 hours ago
Aleko Fassianos, also known as “Greek Picasso” has died aged 86. Fassianos, whose works have been showcased around the world, including paintings, lithographs, ceramics, and tapestries, was forced to put down his painting brush in 2019 due to his deteriorating health, which had him bedridden at his home in the suburbs of Athens for several…

Features
7 Thoughtful Valentine's Day Gift Ideas For Him
5 hours ago
Looking for thoughtful gifts for your partner this Valentine's? You have come to the right place. Contrary to what many people believe, finding the right gift for your partner comes really easy when you know what he likes. For instance, if he loves video games, buying gaming accessories would be the perfect gift. Regardless of…

Music
Celine Dion Announces Cancellation Of World Tour
6 hours ago
Iconic singer Celine Dion has announced the cancellation of her 16 remaining world tours. This cancellation is due to ongoing health issues. The singer who is just recovering from “severe and persistent muscle spasms,” said the healing process is hindering her ability to perform. The Canadian songstress made this known via her post published from…

What's New
BBNaija Erica's Reality Show 'Inside Life With Erica' Airs On BET
8 hours ago
Ex BBNaija housemate Erica Nlewedim stars in her MTV Base reality show Inside Life With Erica on BET. Taking to Twitter, BET Africa shared a teaser for the show scheduled to air every Saturday with the caption "Get an all-access pass into the life of Nigerian actress @EricaNlewedim as she navigates the business and entertainment…

Music
Kizz Daniel... Intimate Melodies Of Barnabas
2 days ago
The cries of his newborns pierced through the airwaves as we began the conversation. “I’m sorry, I have to stay off video,” he apologises, hibernating his newly-assumed ‘daddy duties’ to settle in for the chat.

Music
Adele Leaves Fans in Awe after the Video Release for “Oh My God”
3 days ago
Adele has mesmerised her fans with the release of “Oh My God”, her second single of her album 30. Filled with symbolic meanings, the monochrome video was directed by Sam Brown. This warrants a new beginning for the songstress as she discovers her life as a divorcee.  To capture, perhaps, the visualisation that displays the…

Music
Kanye West Named Suspect In LA Battery Report
3 days ago
Kanye West 'Ye' has been named a suspect in a battery report for allegedly punching a fan who had asked for an autograph. Los Angeles Police Department (LAPD) confirmed that the rapper is being investigated for the incident reported in the early hours of Thursday morning in LA. The LAPD revealed that its officers had…

Music
"Baby Shark" Video Hits First 10 Billion Views On Youtube
3 days ago
“Baby Shark”, the popular nursery rhyme, has made a grand mark by being the first video to hit 10 billion views on YouTube. The inescapable nursery rhyme is most loved by children and often chanted along by their parents. Its 10 billion-view milestone comes after “Baby Shark” set a record in November 2020 to be…

Film
Mo Abudu Appeases Viewers Following Chief Daddy 2 Criticism
3 days ago
EbonyLife CEO Mosunmola Abudu (Mo Abudu) has acknowledged the disappointment expressed by many viewers of Chief Daddy 2. Taking to Instagram, the filmmaker shared a video expressing her thanks to viewers who shared their concerns with the sequel. Captioning her post, she wrote, "Thank you so much for caring, and for sharing your concerns so…

Film
'Rust' Armorer Sues Film Ammunition Supplier Over Death On Set
4 days ago
The armorer on the set of "Rust" sued the film's ammunition supplier Wednesday, accusing him of leaving real bullets among the dummy cartridges, resulting in the fatal shooting of a cinematographer. Hannah Gutierrez-Reed was the armorer in charge of weapons on the Western movie set in New Mexico, where actor Alec Baldwin fatally shot Halyna…

Film
Scream' Returns To Satirize New 'Golden Era' Of Horror
4 days ago
Twenty-five years ago, "Scream" -- starring Neve Campbell and Courteney Cox -- revitalized horror with its highly self-aware take on the increasingly stale and formulaic slasher genre. This Friday, a film again entitled "Scream" -- again starring Campbell and Cox -- returns to breathe new life into the... you get the idea. "Thank God we…

Film
FilmOne Spearheads Nigeria’s Box Office Resurgence, Unveils Production Slate For 2022
4 days ago
West Africa’s leading film production and distribution company, FilmOne Entertainment, has, through its media channels, revealed the role of its production collaborations in the successful recovery of the Nigerian box office in 2021, amongst other insights.

Film
Bob Saget's Daughter Aubrey Shares Last Text From Him
11 Jan
Bob Saget's daughter Aubrey has shared the final text she received from her father before his sudden death. Aubrey posted a screengrab of the text message from the comedian, which was sent while he was on his I Don't Do Negative stand-up tour. "Thank u. Love u. Showtime!" he wrote to her. The Full House actor, who passed away…

Guardian Life
Game of Thrones: 1851 Bombardment of Lagos By The British Naval Forces
23 Jun 2019
“Lagos must be invaded by force” was allegedly the command Consol John Beecroft got from London. A few years ago when HBO premiered the what would later become one of the most sensational series films of all time, only a few really understood the Game of Thrones was based on almost seemly historical incidents that…

Guardian Life
Timeless Memories: ‘Celebrating Wole Soyinka at 85’ Exhibition
26 Jul 2019
“A great man’s responsibility is not only to his biological children, but to every child around him” - African Saying. Professor Wole Soyinka fits this description. A people-builder and a selfless leader, his life, beliefs and everything about him have been about giving back to society and the nation at large. It is said, not in…

Revue
Ebenezer Obey-Fabiyi: The legend, his music
13 Oct 2019
Dressed in semi formal attire, he alights from the car, which brought him to the Federal College of Education, Osiele, Abeokuta.

Guardian Life
ÀBÍKÚ: A Thin Line That Cuts Between Tradition And Science
26 Jan 2020
“In vain your bangles cast Charmed circles at my feet; I am Àbíkú, calling for the first And the repeated time.” - Wole Soyinka (1965) They have existed from time immemorial, in Yorùbá culture and other major cultures in Nigeria and Africa in general. These are children who are born to die. They are called…

Guardian Life
WSICE 2020 Virtual Exhibition: Celebrating Wole Soyinka at 86
22 Jun 2020
The WSICE 2020 Programme takes a new bearing this year due to the global COVID- 19pandemic ravaging the world. Not disturbed by this distraction, however, the project is moving its vigour to a virtual space. This also goes for the Program Exhibition which will be held in a Virtual Space this year. Now in its…
Guardian Arts
Despite lockdown, WSICE celebrates Soyinka at 86
12 Jul 2020
The picturesque redbrick house in Autonomous Residence of Ijegba (A.R.I) offers views that stand it out as a tourism enclave. Perched at the wooded end of Ibara Housing Estate, Kenta, Idiaba, Abeokuta, the building provides a panoramic view for a visitor.