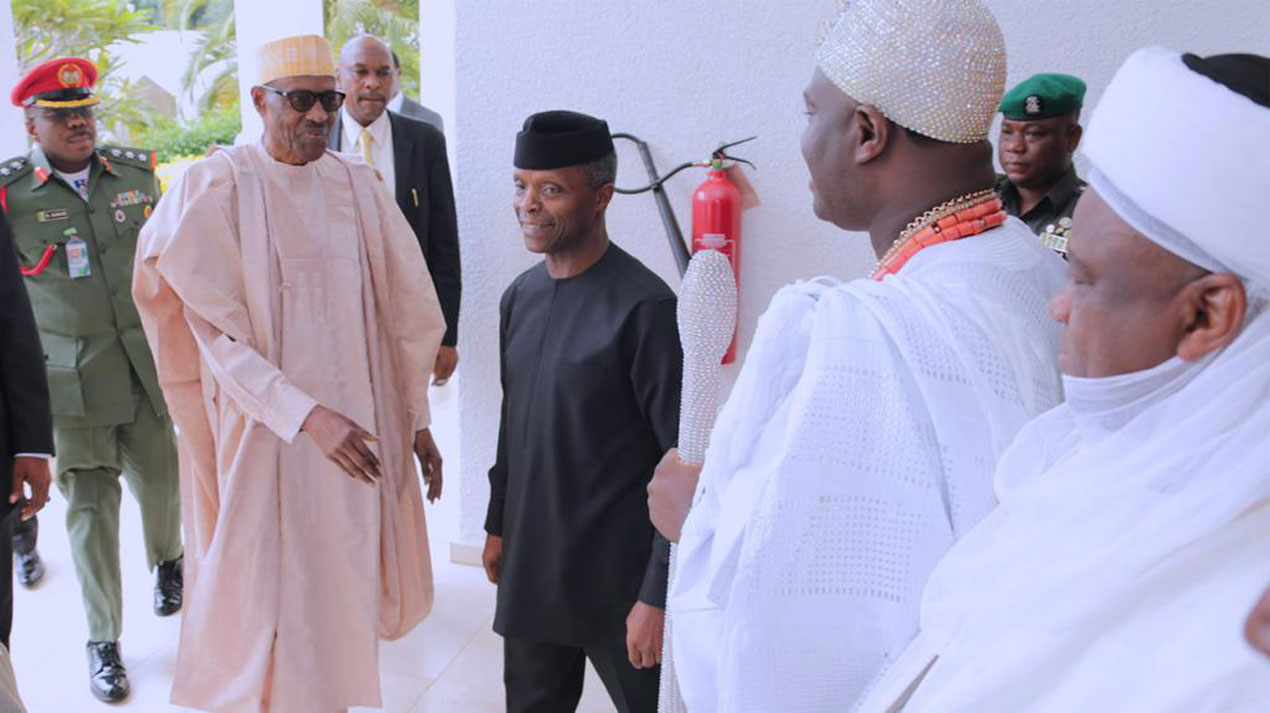 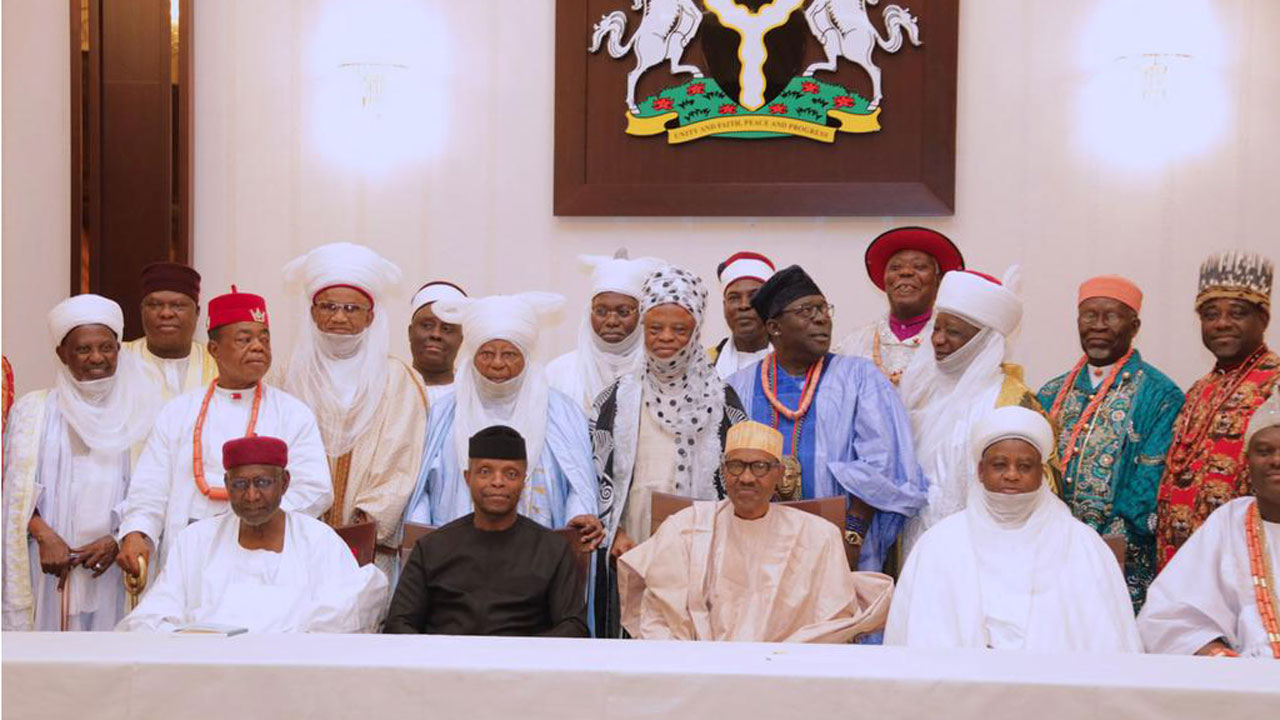 President Muhammadu Buhari (middle); his deputy, Yemi Osinbajo (second left); Sultan of Sokoto, Sa’ad Abubakar III (second right); Ooni of Ife, Oba Adeyeye Ogunwusi (right) and other members of the National Council of Traditional Rulers of Nigeria, during a meeting with the President at the Presidential Villa in Abuja…yesterday. PHOTO: PHILIP OJISUA 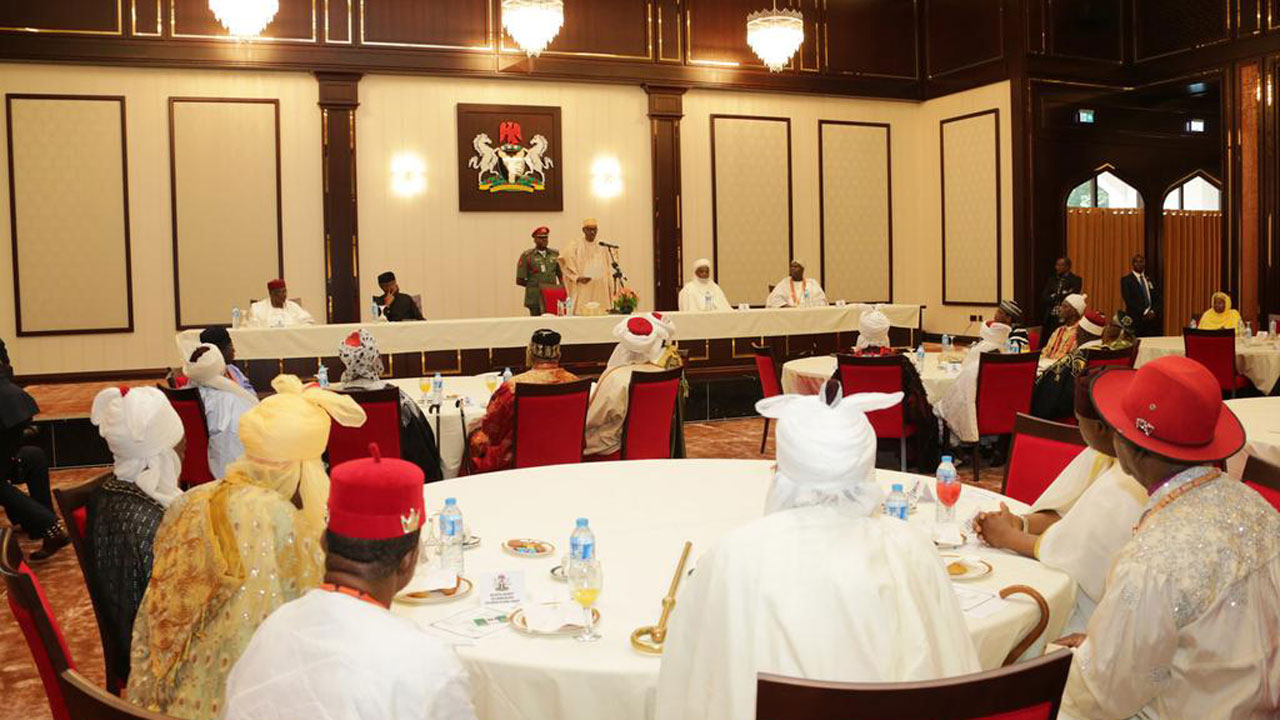 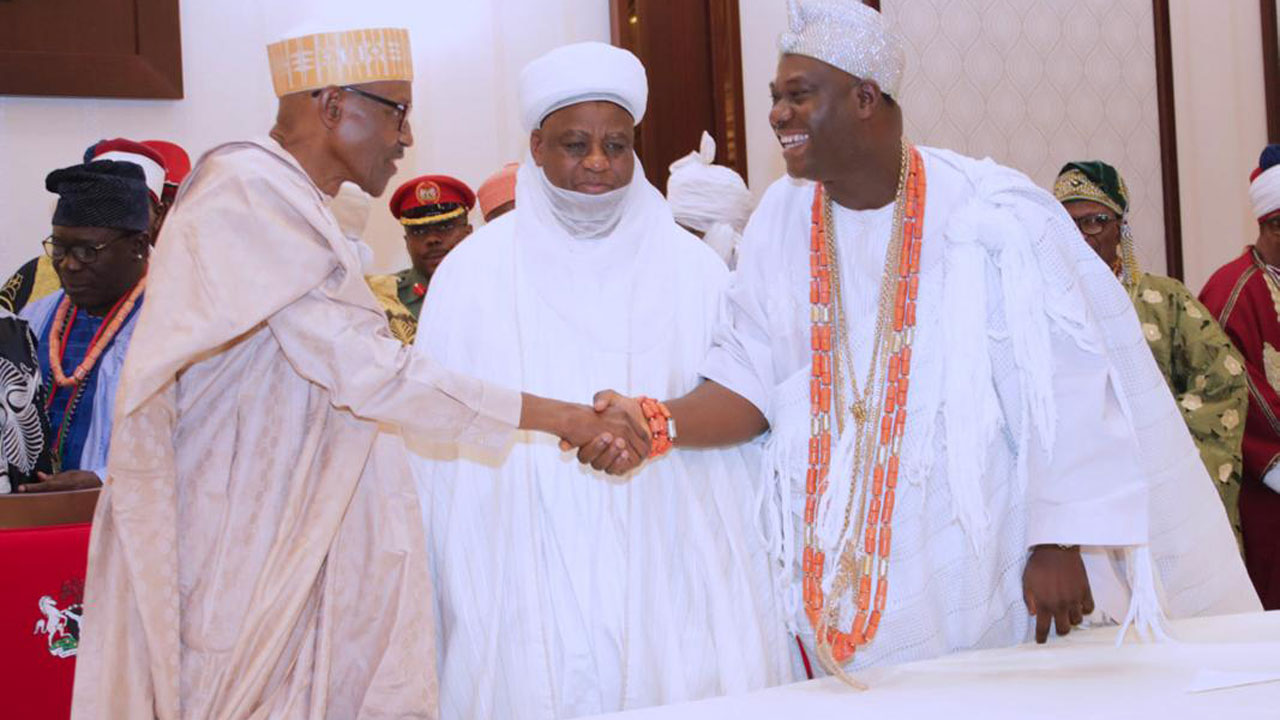 President Muhammadu Buhari has decried the way the Paris Club refund was spent by some state governors.Also, he said he would have fled the country if not for last year’s rainy season, which culminated in a bountiful harvest this year.

Buhari, who spoke at the Presidential Villa when he played host to a delegation of the National Council of Traditional Rulers, led by the Sultan of Sokoto, Sa’ad Abubakar III and its co-chairman, Ooni of Ife, Oba Adeyeye Ogunwusi, frowned at the inability of the affected state governments to pay the retirement benefits and outstanding salaries of workers after the payment of the refund.

He said: “We have to digress this much because I would like to convince you that I’m living with the problems of this country day-by-day, and mostly those of the ordinary people.

He pledged that his administration would continue to do its best in executing developmental projects to uplift the standard of living of all Nigerians irrespective of their geo-political backgrounds.

The President, who told the monarchs that while he was toying with the idea of going on exile to another country, he was equally at a loss as to which of the countries to escape to, said: “We are lucky, last year and this year, the rainy season was good. If it were not good, I’m confiding in you, which country shall I run to? But God answered the prayers of most Nigerians.

“The rainy season last year was good, this year, from the reports I’m getting, it is good. We thank God for that, only God can do that for us,otherwise, there would have been lot of problems in this country.

He, therefore, thanked the traditional rulers for their continued prayers and support to the government and urged them not to relent in their efforts toward ensuring peace and stability in their respective domains.He enjoined them to continue to educate their people on the need to ensure the continued survival of Nigeria as a geo-political entity.

The Sultan said the traditional rulers were in the Presidential Villa to wish the President and the country well and to express their unflinching support for the administration.

He expressed the willingness of the traditional rulers to continue to partner with the government in the fight against corruption and other social vices in the country.Meanwhile, the President has denied reports that he snubbed Governor Abdullahi Ganduje of Kano State during the recent Eid-el-Kabir holidays.

The African Development Bank to introduce first women beneficiaries of AFAWA Guarantee for Growth program
44 mins ago
Q&A with Paula Lanco – Chairwoman of the Women’s Rugby Advisory Committee
44 mins ago
Coronavirus - Eswatini: COVID-19 update (7 March 2021)
44 mins ago
Kasi Insight data on Africa now available as part of an Alternative Data catalog through Bloomberg’s Data Market Place
44 mins ago
Coronavirus - Rwanda: COVID-19 update (7 March 2021)
44 mins ago
Global COVID-19 Experts See Inequitable Distribution and Vaccine Hesitancy as the Key Challenges for Africa in 2021
44 mins ago
Whenever You Are Ready to Travel Again, Jumeirah is Here to Help Plan the Perfect Holiday With an Exclusive Global Offer
44 mins ago