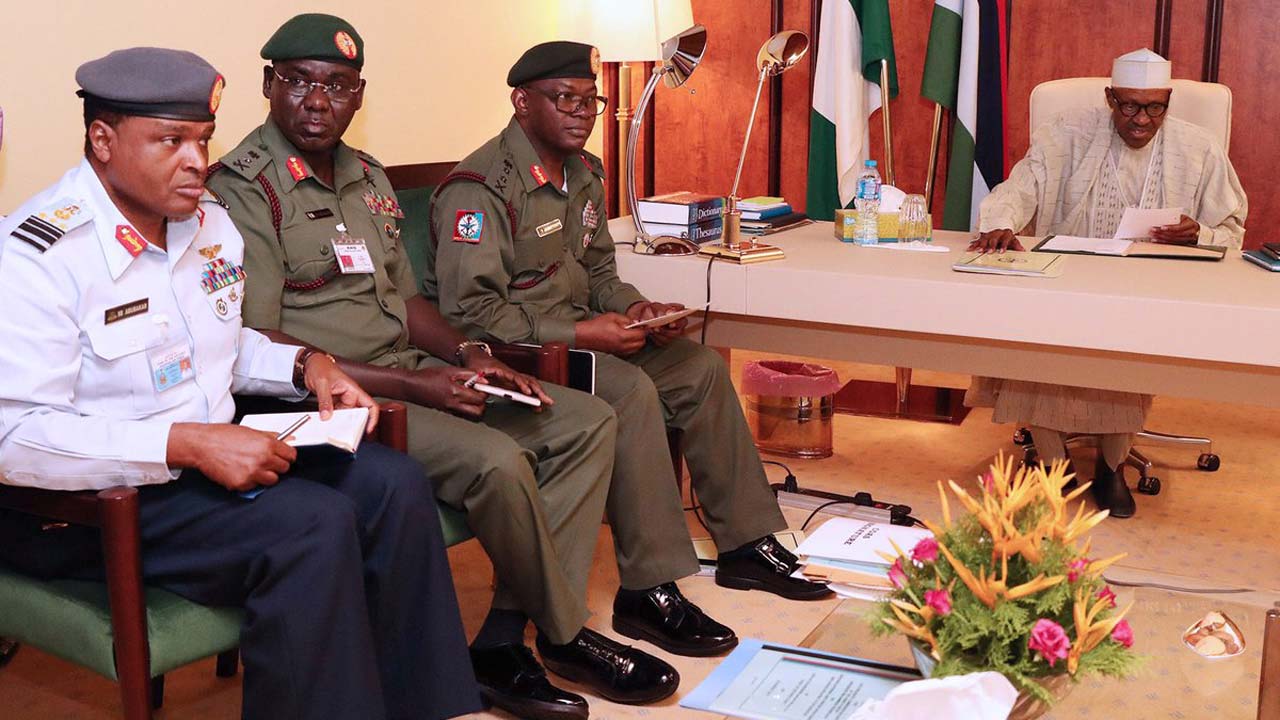 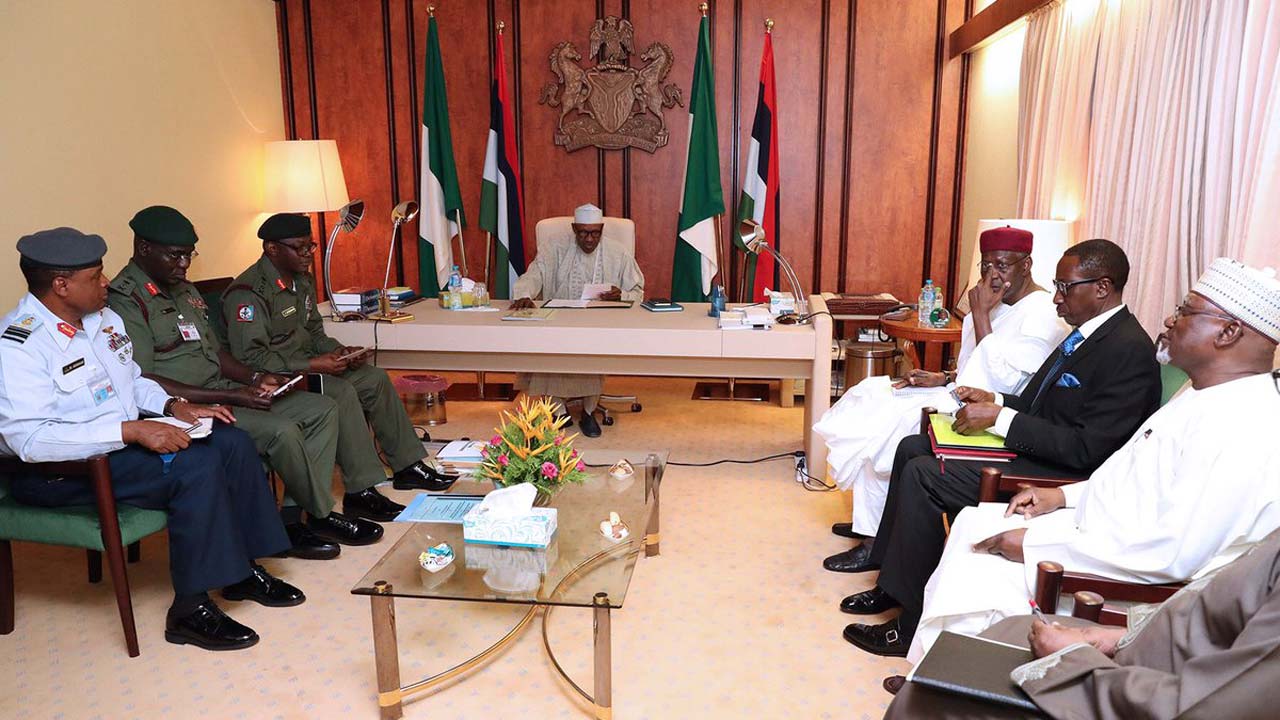 President Muhammadu Buhari yesterday directed the military chiefs and heads of other security agencies in the country to immediately tame threats to the peace and unity of the nation.

He gave the directive during a three-hour closed-door meeting with the service chiefs, including the Chief of Defence Staff, General Gabriel Olonishakin; ‎Chief of Army Staff, Lt. Gen. Tukur Buratai; Chief of Air Staff, Air Marshal Sadique Abubakar; and Chief of Naval Staff, Admiral Ibok-Ete Ekwe Ibas who was represented.

Briefing State House correspondents after the meeting, Gen. Olonishakin said the directive by President Buhari was for the military to checkmate the Boko Haram menace in the north east and the activities of the Indigenous People of Biafra (IPOB) in the South East. He said they were further directed to protect the unity of the country as well as lives and property of Nigerians wherever they reside.

Specifically, he said, the security chiefs were charged by the president to enhance their operational strategies and ensure that troops carry out their assignments diligently.

On whether there was a directive from President Buhari on the activities of IPOB, the CDS said: “All security threats were treated one after the other, ranging from terrorism to kidnapping, herdsmen/farmers clash and IPOB issue. Comments were made as to what to do as regards those issues.”

On the renewed onslaught against Boko Haram, he said, “On the Boko Haram issue, you all know it is an asymmetric warfare. It is not that the Boko Haram have stepped up their game, it is just the issue of suicide bombing that has been the problem. We are working with the security agencies and the intelligence agencies to make sure that we address that menace,” he said.

Also yesterday in Abuja, President Buhari assured that his administration would carry the south east geopolitical zone along especially in the areas of appointments and provision of infrastructure. ‎

He gave the assurance while receiving a coalition of south east youths group who were at the Aso Rock Villa gate to declare support for him.Receiving the group on behalf of Buhari at the gate leading to the Villa, Special Adviser to the President on Media and Publicity, Femi Adesina assured that the administration would specifically pay attention to roads in the region, including the construction of the Second Niger bridge as well as appointments.

Earlier, leader of the coalition with the name “South east youths for Buhari”, Steve Anyata said the reason for the visit was, among others, to inform the president that while he was away on medical vacation, some youths from the north issued a quit notice to Igbo to leave the northern zone before October 1.

All these happened at the Presidential Villa as the presidency explained why construction giant, Julius Berger is carrying out renovation in the office of Buhari.
The president who returned to Nigeria last Saturday resumed work on Monday but operated from his official residence instead of the main office in Aso Rock.

A presidency source told The Guardian yesterday that the construction firm had already begun renovation, hence the temporary halt to the president’s activities in the main office situated within the Villa.

Confirming the development, Personal Assistant to the President on New Media, Bashir Ahmad, explained through his twitter handle@BashirAhmaad why Buhari is working from home. “Some renovations are on going at the office. He’ll be back to the main office after the works,” he twitted.

It was learnt that the renovation was a result of damage rodents had caused after invading the Buhari’s office.A foreign news agency quoted Garba Shehu, Senior Special Assistant on Media and Publicity as saying that while Buhari was away on a medical follow-up in the United Kingdom (UK), rats had a field day with the furniture, cables and air-conditioning units in his office.

“He has used the residential office for many years. What is important is that the job gets done. Whether he does it from his bedroom or his sitting room or his anteroom — it does not matter. Let the job be done. And the job will be done,” he said.