By Odita Sunday, Abuja
Share on Facebook Share on Twitter Share on WhatsApp Share on Telegram
The Commander in Chief of the Armed Forces of Nigeria (AFN), President Muhammadu Buhari has vowed to ensure the sustenance of the ongoing modernization of the Nigerian Army (NA) through the activation of NA Aviation to effectively address contemporary security challenges bedevilling the nation.
1 of 10 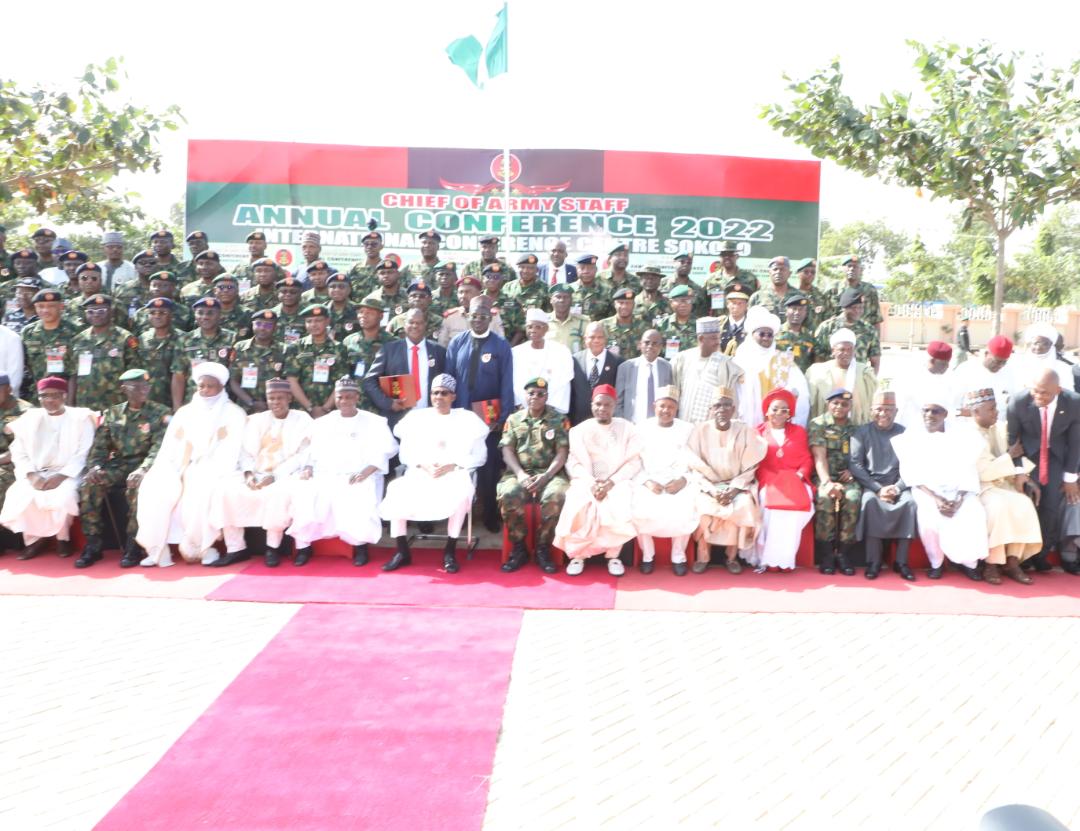 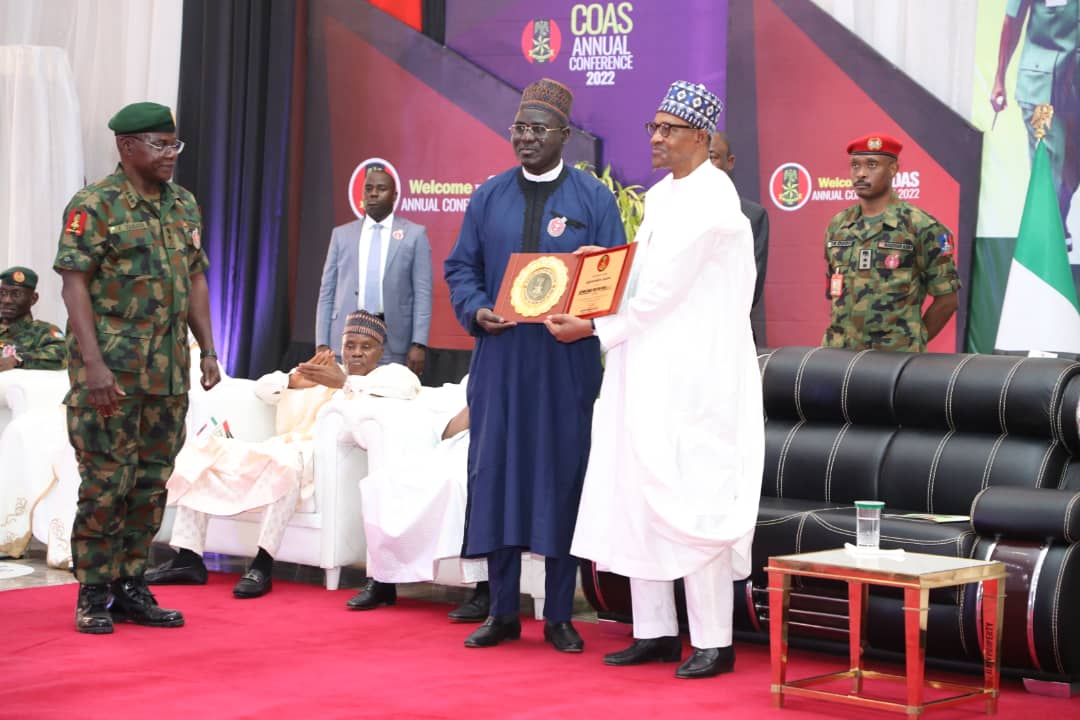 The Commander in Chief of the Armed Forces of Nigeria (AFN), President Muhammadu Buhari has vowed to ensure the sustenance of the ongoing modernization of the Nigerian Army (NA) through the activation of NA Aviation to effectively address contemporary security challenges bedevilling the nation.

The President made the remark during the opening ceremony of the Chief of Army Staff (COAS) Annual Conference 2022 with the theme: “Building a Professional NA for the 21st Century Security Environment” held at the International Conference Centre, Kasarawa, Sokoto State.

President Buhari noted that deliberate efforts have been put in place to fast-track the take-off of NA Aviation through the acquisition of requisite platforms, as proposed in the 2023 budget. The President reiterated his confidence in the NA and other services to defend Nigeria through the implementation of presidential directives.

President Buhari asserted that as an element of national power, the NA will continue to be the catalyst of national development through the provision of support to civil authorities. He further affirmed that the Federal Government will continue to maintain robust policies towards the modernization of the NA and the Armed Forces of Nigeria in general.

He noted that the ongoing process of modernization of the Armed Forces has tremendously improved its capacity and combat efficiency to discharge its constitutional roles. He commended the Service Chiefs and heads of other security agencies for improved synergy in accomplishing his directives, adding that the renewed vigour in operations and improved Civil Military co-operation will enable the nation to achieve the desired national security objectives. He urged the NA to consolidate its achievements through the sustenance of an offensive against terrorists, bandits and other criminal elements threatening the corporate existence of Nigeria.

The President assured that government will continue to cater for the families of deceased personnel who paid the supreme price in defence of Nigeria, through the provision of welfare schemes and educational scholarship programmes.

Earlier in his goodwill message, the Executive Governor of Sokoto State, Rt Hon Aminu Tambuwal extolled the tireless efforts of the NA and other security agencies towards ensuring peace and security in Sokoto state. He commended their resolve and collective contribution to the improved security in North West Nigeria and other regions.

In his remarks during the Conference, the Minister of Defence, Major General Bashir Magashi(rtd) stated that the NA has contributed immensely towards combating insecurity in the country.

He urged commanders to take advantage of the conference to profer practicable solutions to the security challenges confronting the country.

Delivering his welcome address, the Chief of Army Staff (COAS), Lt Gen Faruk Yahaya said the conference is taking place at a time the NA received tremendous support from Mr President, which has boosted the capability of the NA and the Armed Forces in general. He pointed out that year 2022 has been eventful for the NA, particularly in all theatres of operations, where successes have been progressively recorded.

The highlight of the event was the presentation of the Nigerian Army Recognition Award to some eminent Nigerians, who have been supportive to the NA in the areas of health care, education, infrastructure and economic empowerment of widows and orphans. Those who received the NA Recognition Award are Alh Abdul Samad Isyaku Rabiu Chairman BUA Group, Aliko Dangote Chairman of Dangote Group, Col Hameed Ali(Rtd) Comptroller General Nigerian Customs Service, Dr Jim Ovia Chairman of Zenith Bank, Tony Elumelu Founder Tony Foundation and Lt Gen Tukur Buratai former Chief of Army Staff.

Nigeria
Army would be neutral for successful polls, new GOC 82 Division declares
7 mins ago
The new General Officer Commanding (GOC), 82 Division, Nigerian Army, Enugu, Major General Aminu Chinade, said, yesterday, that the army would remain neutral and professional in ensuring peaceful conduct of the 2023 general elections.
Nigeria
Ugochinyere only seeking attention, says Imo govt
16 mins ago
Imo State government, yesterday, declared that the self-acclaimed spokesman of Conference of United Political Parties (CUPP), Ikenga Ugochinyere, has, once more, shot himself in the foot during a media briefing in Abuja, on Wednesday, by lying and confirming that he is unfit to occupy public office, particularly, representing Ideato Federal Constituency in the National Assembly.
Nigeria
Court rules on Enugu PDP candidates’ disqualification suit Feb 15
18 mins ago
A Federal High Court in Enugu has fixed February 15 for judgment in the suit seeking disqualification of the Peoples Democratic Party (PDP) candidate, in Enugu State, from taking part in the 2023 general elections.
Nigeria
You will end well in office, Anglican archbishop tells Ugwuanyi
26 mins ago
The Archbishop, Metropolitan and Primate of All Nigeria (Anglican Communion), Most Rev. Dr. Henry Ndukuba, has expressed gratitude to Governor Ifeanyi Ugwuanyi of Enugu State for his generosity and contributions to the growth of God’s kingdom since the inception of his administration.
World
China says working to 'verify' reports it flew spy balloon over US
27 mins ago
China said Friday it was working to verify the facts around US claims that Beijing flew a spy balloon over its territory, warning against "hype" over the issue.

Nigeria
You lack moral to condemn APC, FG slams Atiku
5 Dec
*Says APC tarred road to your home The Federal Government has condemned the Presidential candidate of the Peoples Democratic Party (PDP), Alhaji Atiku Abubakar, for saying that the ruling All Progressives Congress (APC) has done nothing for Nigerians in the last eight years. The Minister of Information and Culture, Alhaji Lai Mohammed spoke Monday at…

APO Press Releases
Economic Community of West African States (ECOWAS) Leaders Lay Foundation for a New Headquarters Building in Abuja
5 Dec
The Heads of State and Government of the Economic Community of West African States (ECOWAS) laid the Foundation of a new ECOWAS Headquarters building on December 4, 2022 in Abuja, Nigeria. The new headquarters Project which is being financed by the Chinese Government through China Aid is expected to be completed in 26 months. In…

Nigeria
Nigeria train resumes eight months after deadly attack
5 Dec
Nigeria on Monday resumed a train service linking the capital with a northern city, eight months after it was suspended following one of the country's most high-profile attacks.