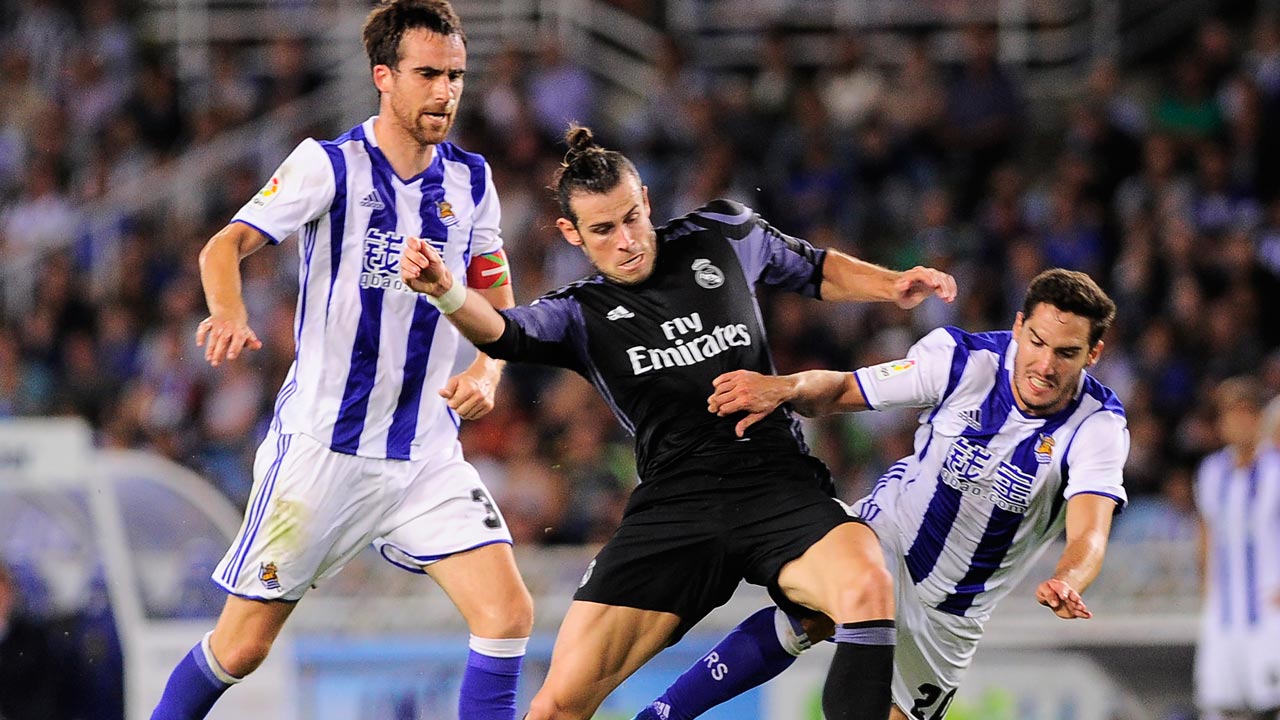 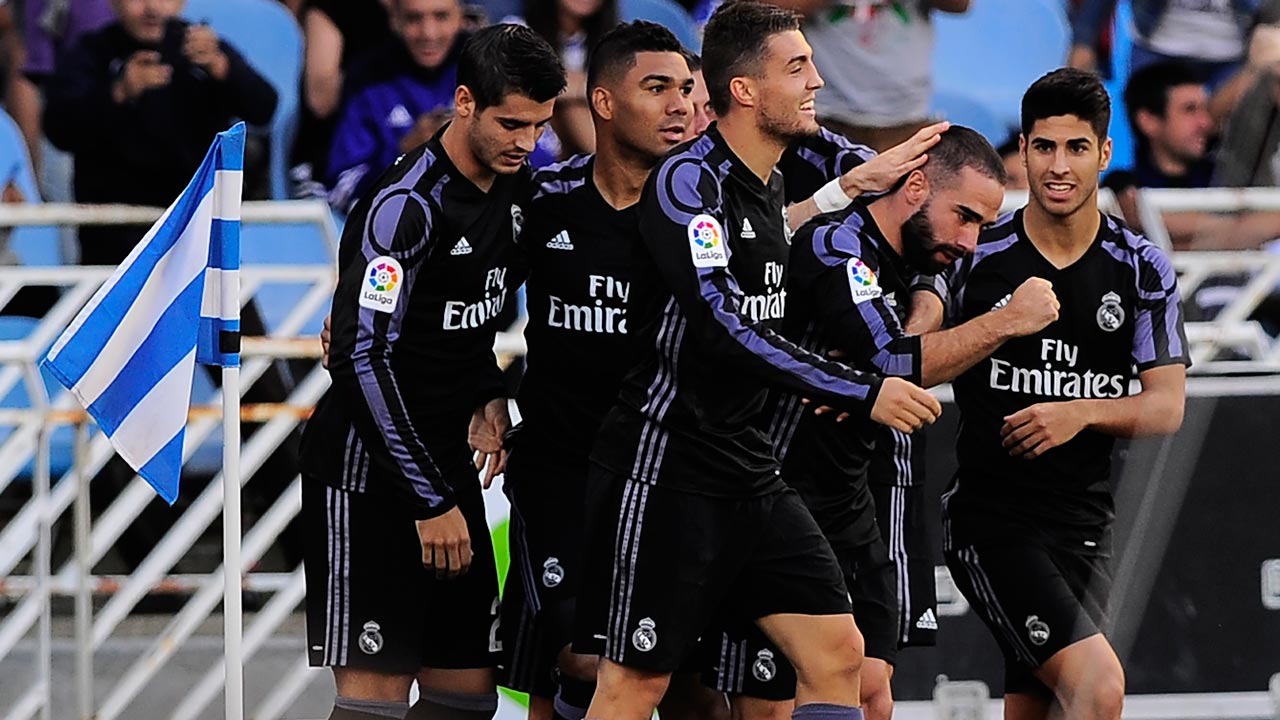 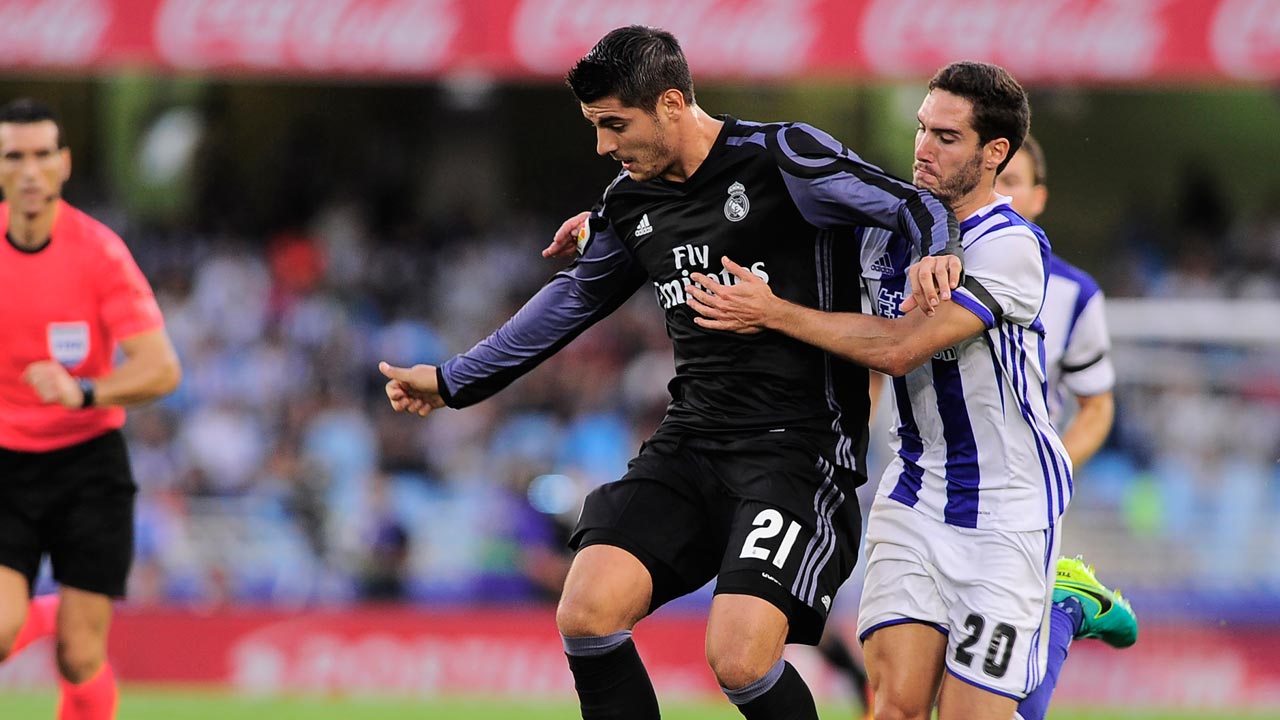 Bale was the only member of the renowned ‘BBC’ forward line who was fit enough to play in Sunday’s game, as Zinedine Zidane’s team travelled to San Sebastian in the midst of an injury crisis, with five regular starters unable to make the squad.

As well as star forwards Cristiano Ronaldo and Karim Benzema, Luka Modric, Keylor Navas and Pepe were also ruled out, but it didn’t stop Madrid earning a convincing win at a notoriously tricky venue.

Bale was picked despite having appeared in just one friendly in pre-season, but the Welshman got Madrid off to a flying start, leaping into the air to powerfully nod home Dani Carvajal’s tempting cross in only the second minute.

Kiko Casilla had to be quick off his line at the other end after a short back-pass by Raphael Varane, hacking the ball to safety under pressure.

Alvaro Morata nearly scored his first goal since returning to Real Madrid but, after a clever dribble, his strike was deflected behind for a corner.

A Toni Kroos effort met the same fate, with goalkeeper Geronimo Rulli quick to get down to tip the German’s drilled strike behind.

Real Sociedad had a good opportunity to level on the half-hour mark, but former Madrid man Asier Illarramendi opted to pass to Juanmi instead of shooting when well placed and the ball didn’t reach his team-mate.

It was an end-to-end affair, with Morata denied again by Rulli, while youngster Asensio, picked ahead of James Rodriguez and Isco, continued to bewilder defenders with his quick feet on his first start in La Liga for the European champions.

The forward scored Madrid’s second goal in the 40th minute with an effortless lob after he was sent through on Rulli’s goal by Varane’s pass, scooping the ball over the stopper with ease.

Morata was seeing a lot of the ball in the second half but was foiled at every turn, being booked for diving in the area before his shot was saved and Kroos cracked the rebound against Rulli’s crossbar.

The goalkeeper was called into action to tip a Mateo Kovacic piledriver wide as Madrid continued to turn the screw, although despite their dominance they could not stretch their lead until Bale ran through, rounded Rulli and squeezed the ball home with the last kick of the game.

Champions Barcelona opened their campaign in style on Saturday by beating Betis 6-2 with Luis Suarez scoring a hat-trick and Lionel Messi netting twice.

Nigeria
2023: APC, PDP in mind game over primaries
43 mins ago
The countdown to presidential primaries of the two major parties – All Progressives Congress (APC) and Peoples Democratic Party (PDP) – is coming with all the thrills and trappings...
Nigeria
How influential politicians get away with corruption, by Falana
48 mins ago
Human rights lawyer, Femi Falana (SAN), has condemned “the manipulation of the justice system to favour influential politicians facing corruption charges in Nigeria.”...
Nigeria
No plan to ban Facebook over IPOB, government clarifies
58 mins ago
The Federal Government, yesterday, declared that it was not nursing any intention to ban Facebook over alleged inciting statements by the Indigenous People of Biafra (IPOB).
Sport
More home-based players will get opportunity to play for Eagles, says Finidi
1 hour ago
Super Eagles new first assistant coach, Finidi George, has revealed that the new technical crew, led by Jose Peseiro, will give more home-based players the opportunity to challenge for shirts..
Nigeria
Monye urges media to support youth aspiring to political offices
1 hour ago
African Democratic Congress (ADC) presidential aspirant, Chukwuka Monye, has called on the media to encourage young people aspiring to political offices, rather than shut them down due to some factors.

Sport
Man Utd and PSG to clash again in Champions League last 16
13 Dec
Manchester United and Paris Saint-Germain will meet in the Champions League for the third time in four seasons after being paired together in Monday's draw for the last 16.

Sport
Confusion at UEFA Champions League draws
14 Dec
In the original draw, Manchester United’s ball was pulled out of the pot against Villarreal, but they were ineligible to face each other as they had been in the same group