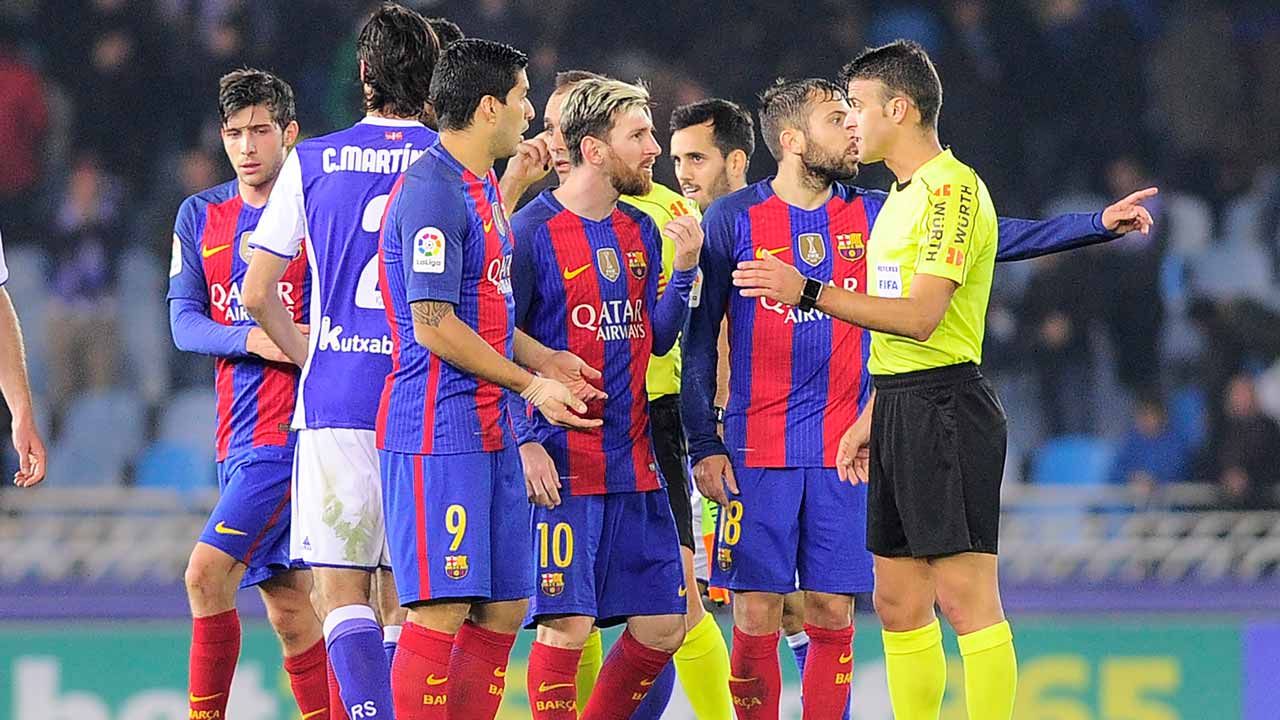 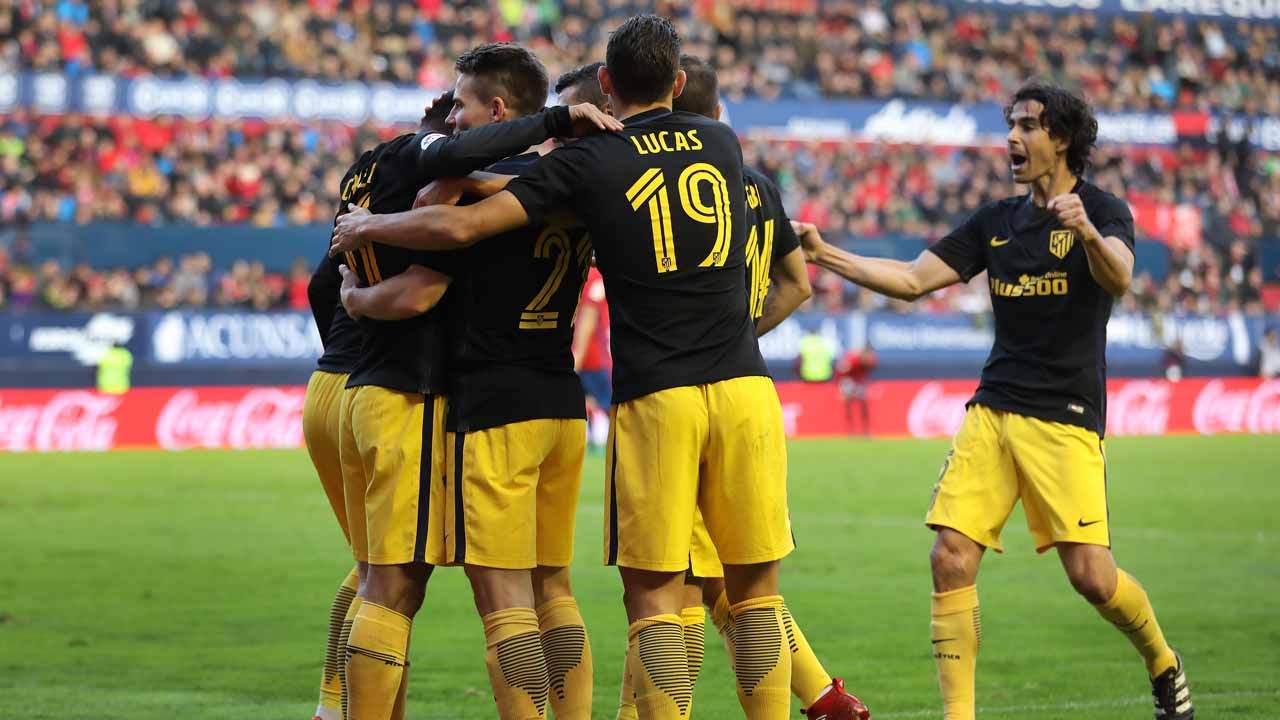 Barcelona’s winless streak at Real Sociedad stretched to eight games as the Spanish champions were outplayed in a 1-1 draw on Sunday that leaves them six points adrift of La Liga leaders Real Madrid.

A sumptuous finish from Lionel Messi spared Barca’s blushes after Willian Jose had headed Sociedad into a deserved lead just after half-time.

And Barca were fortunate to escape without a fifth consecutive league defeat in San Sebastian as Carlos Vela hit the woodwork twice and Juanmi’s header was wrongly ruled out for offside.

“It is almost a miracle that we took a point,” Barca boss Luis Enrique told BeIN Sports Spain.

“Real Sociedad were infinitely better than us with and without the ball. They won all the battles.”

A point is enough to move Barca up to second, but they now desperately need to beat Madrid in the first El Clasico of the season at the Camp Nou on Saturday.

Earlier, Atletico Madrid got back to winning ways and moved back into the top four as goals from Diego Godin, Kevin Gameiro and Yannick Carrasco ensured a comfortable 3-0 win at Osasuna.

Barcelona still haven’t won in San Sebastian since 2007, but were grateful for the point as Sociedad failed to cash in on their superiority.

“Playing like this it will be very difficult to win the league,” added Barca defender Gerard Pique.

Xabi Prieto headed a guilt-edged chance wide, whilst Vela also fired off target when well-placed inside the area before the break.

The visitors’ first effort on target came on 50 minutes when Geronimo Rulli turned behind Neymar’s free-kick.

However, Sociedad went in front three minutes later when Pique, who played on in the second-half with a severely strapped ankle, could only slash Jose’s effort into his own net after Marc-Andre ter Stegen had blocked Vela’s initial effort.

Neymar started up front for Barca despite suffering a minor car accident in his Ferrari on Sunday morning.

And the Brazilian finally kickstarted a lame Barca display six minutes later as he burst down the left and crossed for Messi to apply a characteristically clinical finish for his 19th goal in 16 games this season.

Sociedad were cruelly denied 14 minutes from time when a wonderful hit by Vela came back off the underside of the bar and substitute Juanmi’s finish from the rebound was wrongly ruled out for offside.

Asier Illarramendi then cleared off the line from Denis Suarez at the other end before Vela struck the woodwork again with a low effort that clipped the post in a frantic finale.

– Atletico respond –
Atletico had suffered back-to-back La Liga defeats for the first time in four years at the hands of Sociedad and Real Madrid in recent weeks.

However, they never looked in danger after Jan Oblak had saved Roberto Torres’s penalty with the scores still level at 0-0.

Substitute Carrasco rounded off the scoring with his eighth goal of the season in stoppage time.

“It was a very important game for us for the way in which we ended up playing,” said Atletico coach Diego Simeone.

Atletico leapfrog Villarreal, who earlier lost 2-0 at home to Alaves, into fourth and move back to within nine points of Real Madrid.

“Oblak was decisive with the penalty save and after Godin’s goal we felt more comfortable,” added Simeone.

“In the second half we were a lot more organised and had more of a collective effort which allowed us to kill off the game.”

Granada remain winless and rooted to the bottom after a 3-1 defeat at Celta Vigo.

Nigeria
Church decries killing of 30 Christians in Taraba, seeks relief for victims
NOW
Worshippers at the 98th General Church Council (GCC) of the Reformed Church of Christ in Nigeria (RCCN) in Taraba State were broken as a minute silence was observed for the over 30 members...
Nigeria
Minister urges re-evaluation of justice system impact on petty offences
2 mins ago
The Minister of Women Affairs, Pauline Tallen, has stressed the need to re-evaluate and improve awareness on the impact of the justice system as it relates to petty offences.
Nigeria
ECWA denies forcefully converting Almajirai
6 mins ago
The President, Evangelical Church Winning All (ECWA), Rev. Stephen Panya, has debunked allegations that the Department of State Services (DSS) stormed the church’s facility in Jos where ...
Friday Worship
NACOMYO urges Muslim youths to get PVC, elect credible leaders
10 mins ago
The National Council Of Muslim Youth Organisations (NACOMYO), Lagos State Chapter, has said that voter apathy is a threat to the sustenance of good governance in the country.
News
74-year-old retired soldier alleges threat to life, seeks govt protection over leased property
12 mins ago
A retired soldier, Mr. Julius Abiodun Soares, 74, has urged Lagos State Government and the State Attorney General to help him recover his piece of undeveloped land at Shasha area of Lagos.

Sport
Onyekuru, Umar, eight others in Eagles’ Camp
2 Jan
The number of players in the Super Eagles’ camp, yesterday rose to 10, as the Coach Augustine Eguavoen-led squad intensifies preparation for the Africa Cup of Nations....

News Feature
Disturbing menace of violent clashes among Secondary School Students
2 Jan
The incessant fights that often erupt among some secondary school students in Lagos, these days, are becoming rather worrisome.

Sport
Mbappe not affected by uncertain future, says Pochettino
2 Jan
Paris Saint-Germain coach Mauricio Pochettino said on Sunday that there would be "no problem" with Kylian Mbappe being affected by speculation over his future.