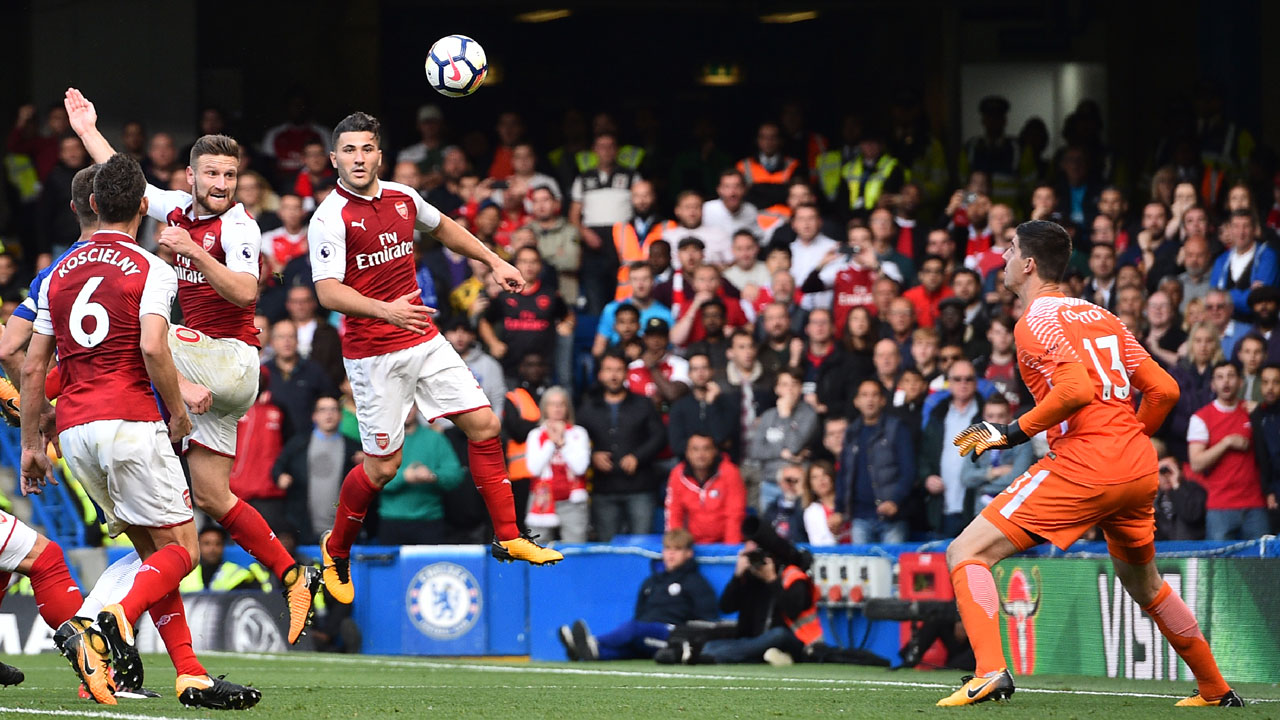 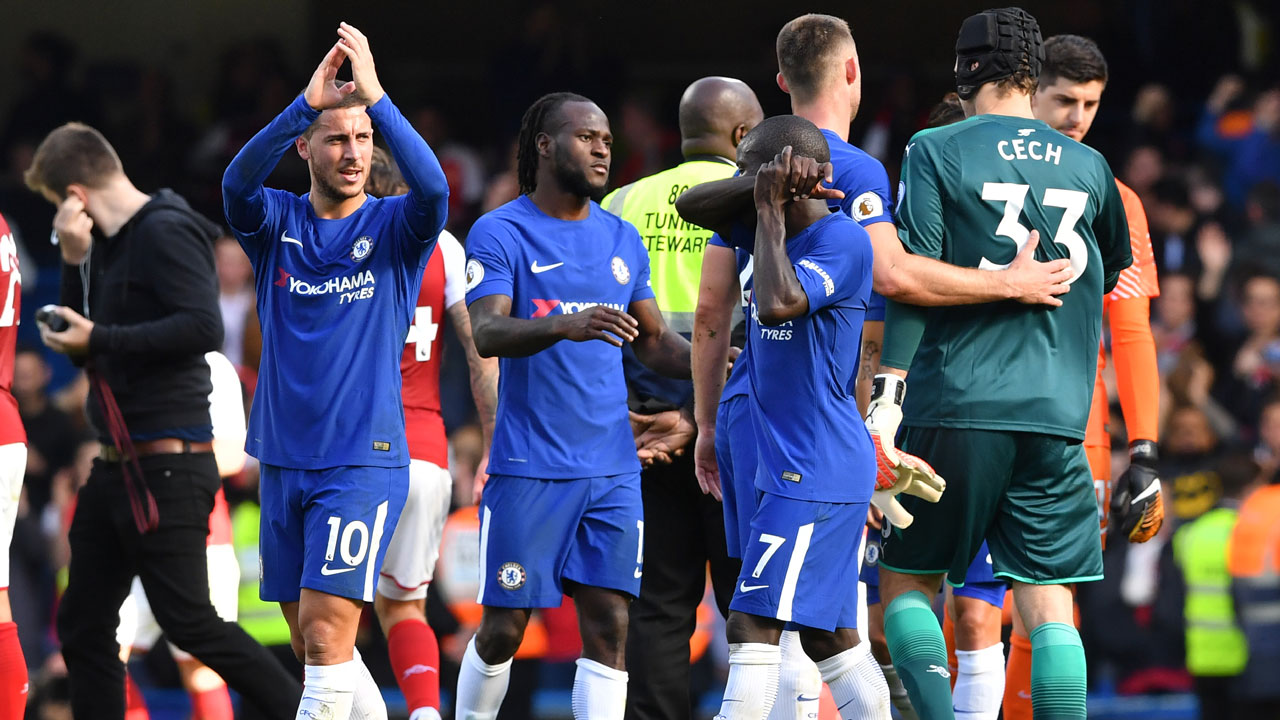 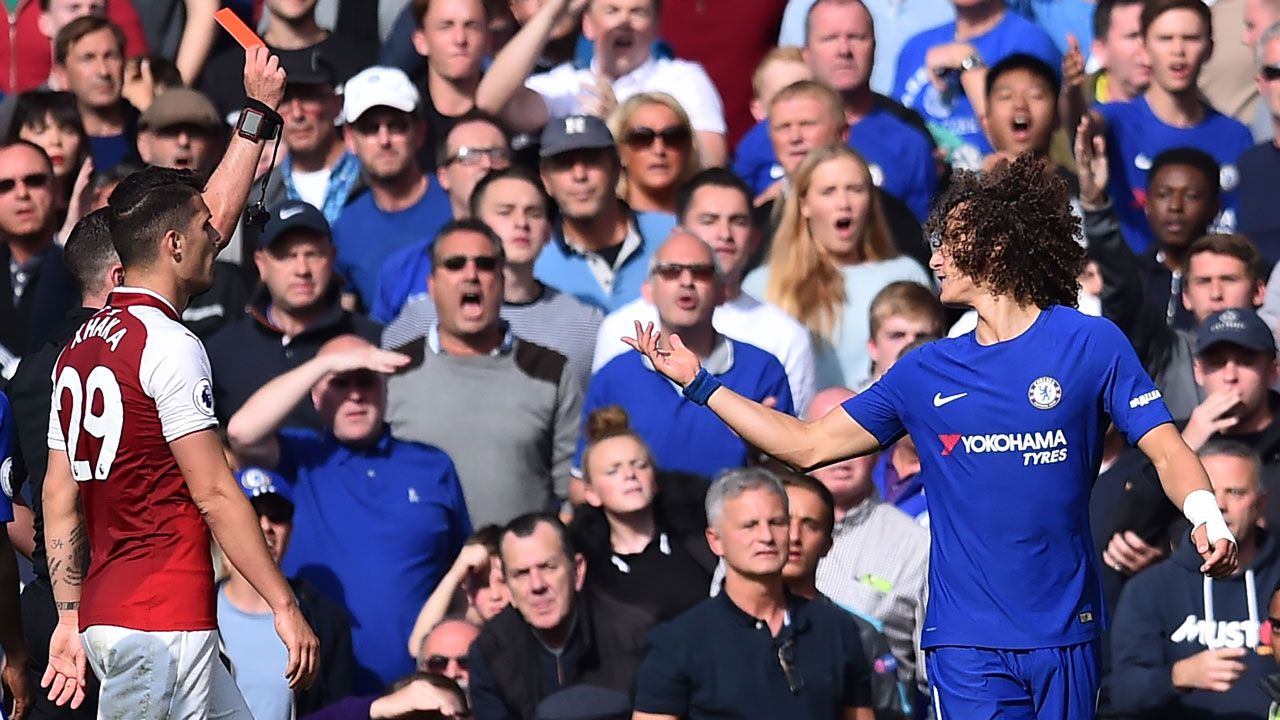 Chelsea defender David Luiz was sent off for an ugly foul on Sead Kolasinac as Arsenal finally emerged unscathed from a trip to Chelsea with a 0-0 draw against the champions on Sunday.

The Brazilian saw red in the closing minutes at Stamford Bridge and he could have no complaints about his dismissal after lunging into a crude two-footed challenge on Arsenal defender Kolasinac.

It was the third sending-off for a Chelsea player in their last three meetings with Arsenal.

Victor Moses got his marching orders in last season’s FA Cup final, while Pedro was dismissed in the Community Shield.

The David Luiz flashpoint — Chelsea’s fourth red card this season — was the most memorable moment of a hard-fought London derby that was high on perspiration but low on inspiration.

After losing on their last five visits to Chelsea, Arsene Wenger’s side had the better of the few clear-cut chances.

But Danny Welbeck, Aaron Ramsey and Alexandre Lacazette all squandered good opportunities to hand Arsenal their first win at the Bridge since October 2011.

David Luiz’s moment of madness came too late for Arsenal to capitalise on their numerical advantage, so they had to settle for a first clean sheet at Chelsea since 2005.

It was another frustrating encounter with Arsenal for Antonio Conte’s men, who were beaten in both the FA Cup final and the Community Shield.

Arsenal weathered an early storm before Welbeck wasted a golden opportunity when Hector Bellerin’s cross picked out the unmarked forward, who couldn’t adjust quickly enough to keep his header on target.

Bellerin crossed low for Lacazette, but the France striker’s shot was too close to Chelsea goalkeeper Thibaut Courtois.

Arsenal were sweeping forward with real purpose and Kolasinac tested Courtois with a stinging drive that the Belgian parried away.

The Gunners’ rearguard remained as creaky as ever and Cesc Fabregas sprung their offside trap with a precise pass to Pedro, whose tame shot at Petr Cech let the visitors off the hook.

They should have taken the lead just before half-time when Ramsey had only Courtois to beat after weaving his way past Cesar Azpilicueta and David Luiz.

However, Ramsey stabbed his shot against the far post before Lacazette somehow contrived to scuff the rebound over from close range.

Chelsea continued to lack a cutting edge after the break and Willian shot straight at Cech, then blazed over from long range as another attack petered out.

Shkodran Mustafi had the ball in the net for Arsenal, but the defender’s header was correctly ruled out for offside.

As Chelsea’s frustration mounted, David Luiz shrugged off Alexis Sanchez — on as a substitute — and launched into a needless lunge on Kolasinac in the 87th minute. He was immediately shown a red card by referee Michael Oliver.

Jada Pinkett Smith Admits She Had A Relationship With August Alsina
1 day ago  What's New
Protest against Mali president turns violent
1 day ago  World
FG projects N11.86trn expenditure for 2021
1 day ago  Nigeria
Falz, Fuse ODG and Nandy Team up with Krizbeatz on OGEDE
1 day ago  Music
Real Madrid's Marcelo could miss rest of season with adductor injury
1 day ago  Sport