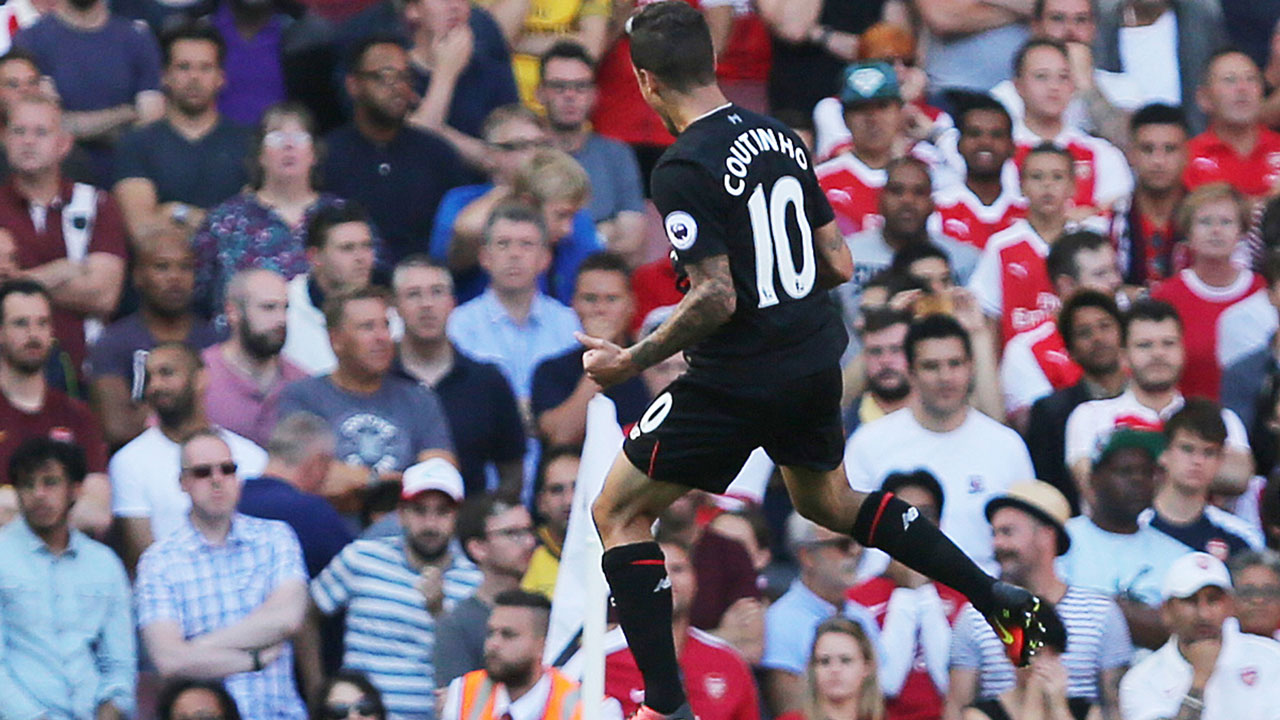 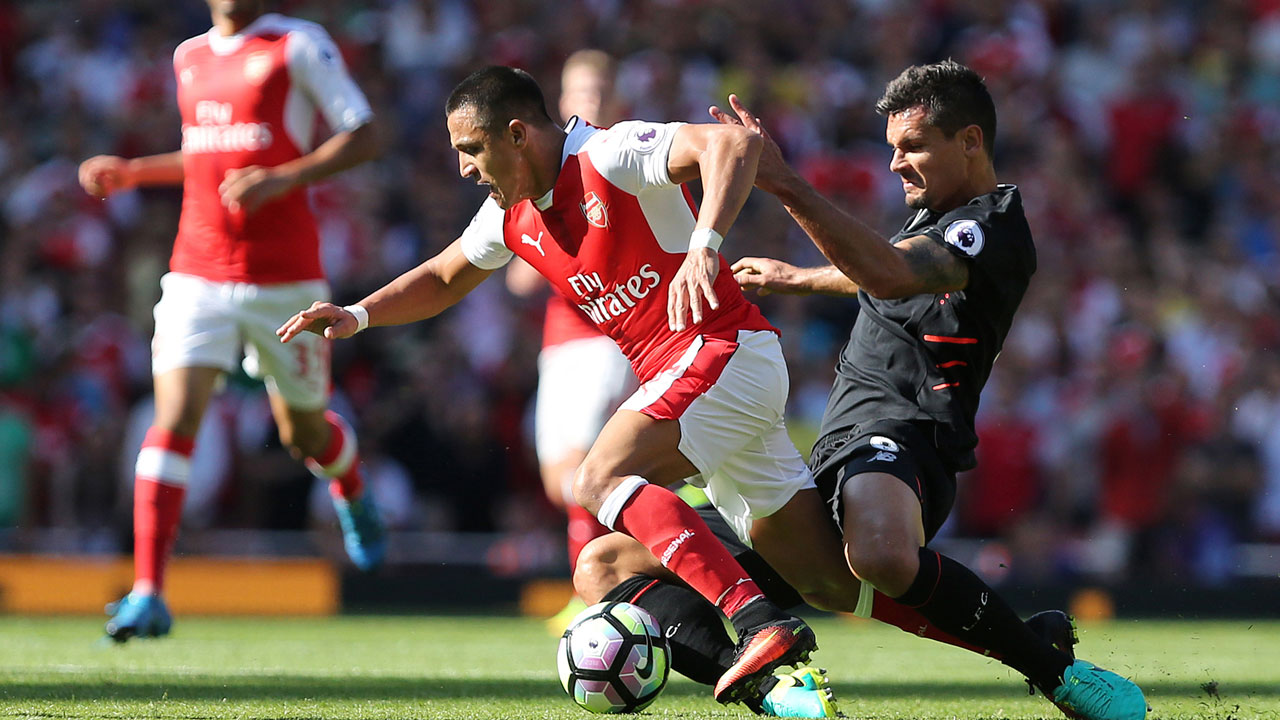 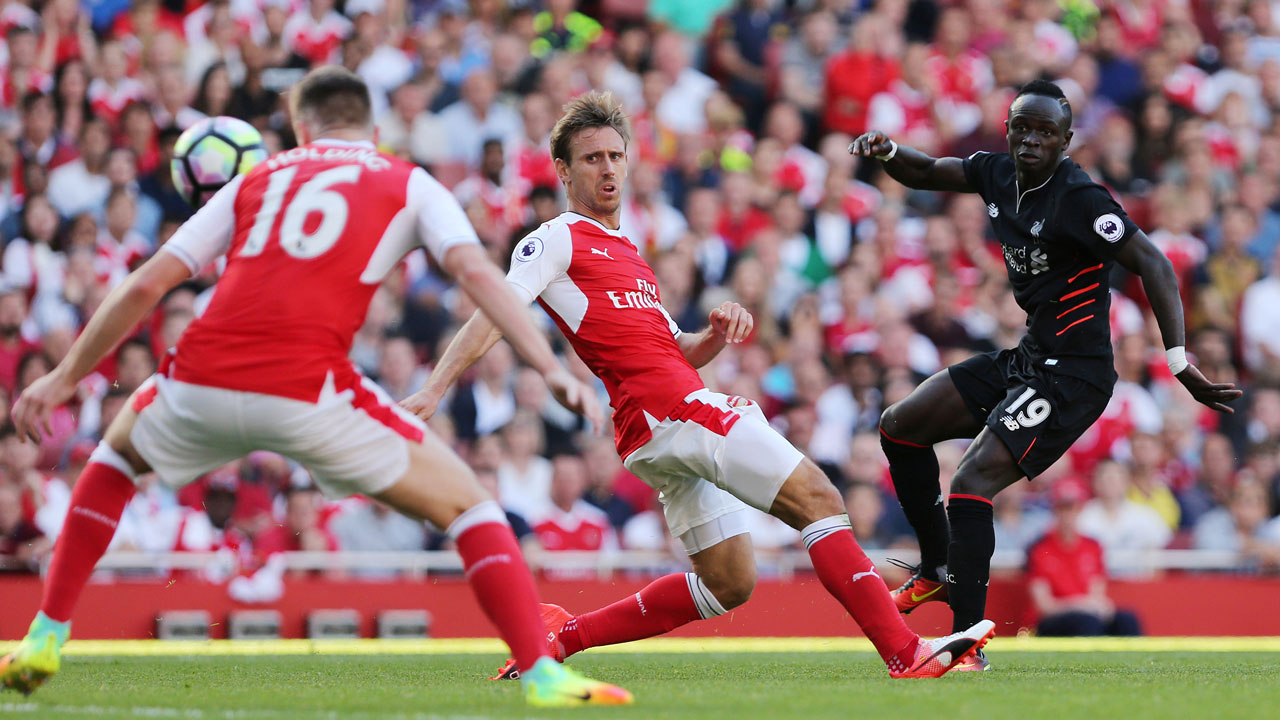 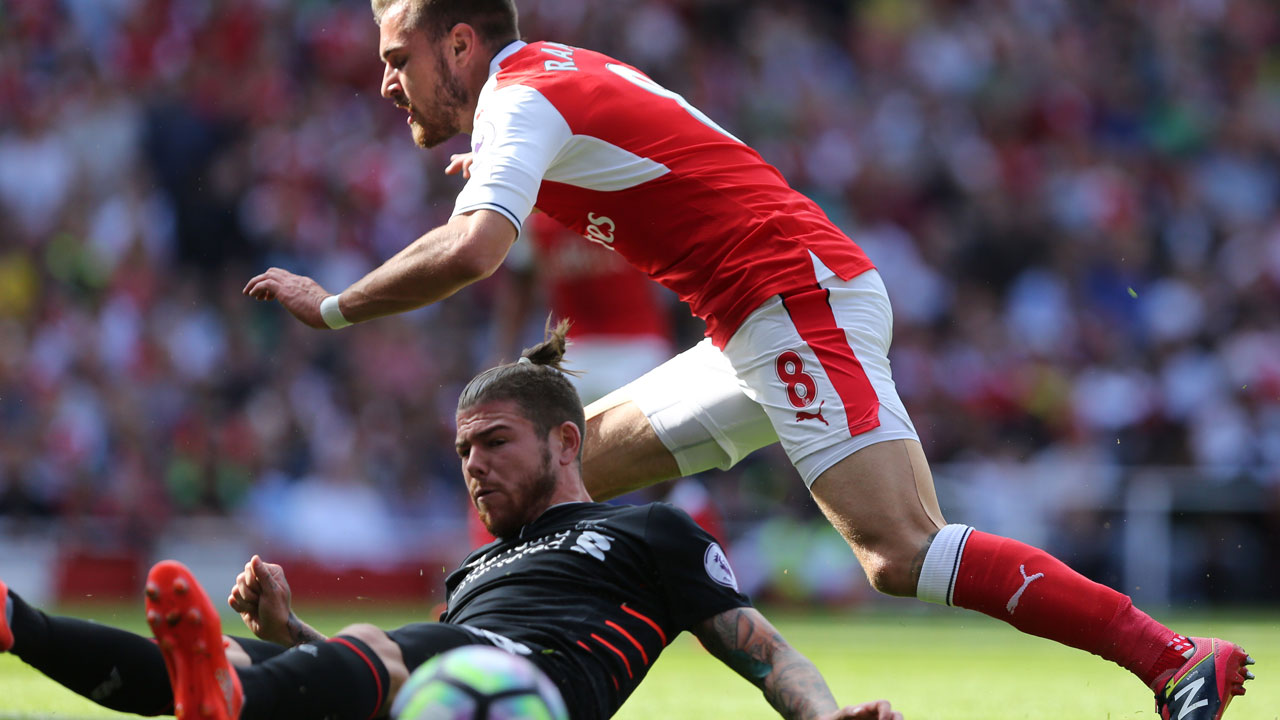 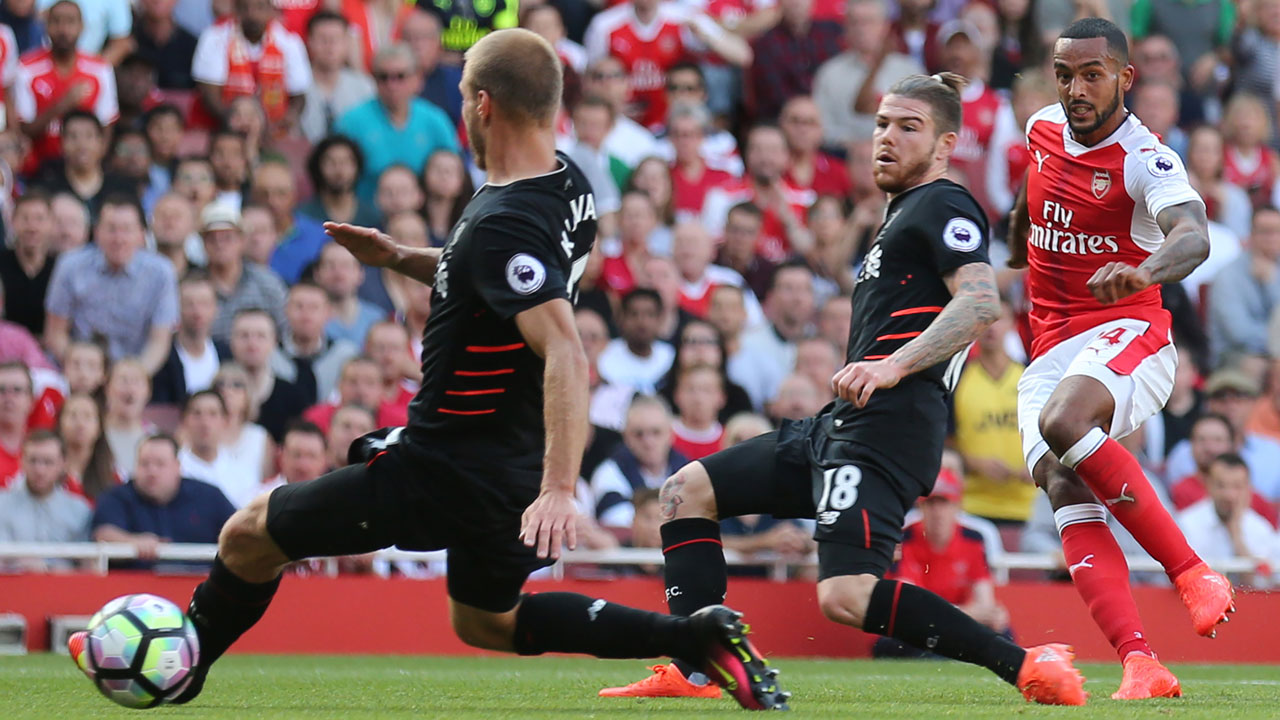 Arsenal's English midfielder Theo Walcott (R) scores the opening goal during the English Premier League football match between Arsenal and Liverpool at the Emirates Stadium in London on August 14, 2016. Lee MILLS / AFP
Philippe Coutinho’s double inspired Liverpool to come from behind and beat Arsenal 4-3 in an action-packed clash of Premier League heavyweights at the Emirates Stadium on Sunday.

After seeing a penalty saved by Simon Mignolet, Theo Walcott put Arsenal ahead, only for Coutinho to reply with a picture-perfect free-kick in first-half injury time.

Goals early in the second half from Adam Lallana, Coutinho and Sadio Mane put Jurgen Klopp’s Liverpool 4-1 up, but efforts from Alex Oxlade-Chamberlain and Calum Chambers made for a nervy finish.

It was only Liverpool’s second win at Arsenal in 21 attempts and put an early dent in Arsene Wenger’s hopes of leading the London club to a first league title since 2004.

The Frenchman, who celebrates his 20th anniversary as Arsenal manager in October, has now seen his team beaten at home in their opening league game three times in four years.

Klopp, starting his first full season as Liverpool manager, celebrated each of the visitors’ goals with trademark abandon, but he will have been concerned by an injury that forced Coutinho off.

But after some untidy opening exchanges, Arsenal were first to impose themselves on the game.

Aaron Ramsey, playing in a number 10 role, had a couple of sights of goal, jabbing a shot straight at visiting goalkeeper Mignolet and then lifting an ambitious lob well over the bar.

Liverpool left-back Alberto Moreno was proving a typically chaotic presence and on the half-hour his untidy, full-blooded challenge on Walcott gifted Arsenal a penalty.

Walcott took the spot-kick himself and saw Mignolet plunge to his right to push it away.

But barely a minute later the England forward atoned as Alex Iwobi’s pass caught Moreno out of position and Walcott clipped a low shot inside the left-hand post.

Having won a free-kick by going down a little easily under pressure from Holding, the Brazilian took charge of the set-piece himself, curling an exquisite 25-yard shot right into the top-left corner.

It had been an evenly balanced first half, but within 18 minutes of kick-off in the second Liverpool had the game in the bag thanks to three delightful goals.

Four minutes in, Coutinho sent Wijnaldum scampering towards the byline on the left with a stabbed first-time pass.

The former Newcastle United midfielder cut inside and lifted a cross to the back post, where Lallana chested the ball down before steering it past the outrushing Mignolet.

Seven minutes later, an attack from the opposite flank produced the same result, Nathanie Clyne crossing from the right and Coutinho darting in at the near post to volley home.

Mane opened his Liverpool account in the 63rd minute with a splendid goal, driving down the right and slipping between Chambers and Nacho Monreal before hammering a left-foot shot past Mignolet.

The Senegal international celebrated by leaping onto Klopp’s back.

There were boos from the home fans, but a minute later substitute Oxlade-Chamberlain gave them hope by cutting in from the left and beating Cech via a deflection off Dejan Lovren.

Wenger gave new signing Granit Xhaka his debut as a replacement for Mohamed Elneny, while Coutinho came off after injuring himself as he chased a through ball, with Emre Can coming on.

Chambers further reduced the arrears with a 75th-minute header from Santi Cazorla’s free-kick, but Liverpool held on to secure a breathless win.

Nigeria
48 hours to APC presidential primary: Another shift likely over absence of screening, convention committee
1 hour ago
Uncertainty trailing conduct of the special convention of the ruling All Progressives Congress (APC) to nominate its presidential candidate for the 2023 general election is giving party members anxious moments as the Independent National Electoral Commission (INEC) deadline draws nearer.
Nigeria
Sanwo-Olu, Abiodun, Zulum, others pick APC second term ticket
1 hour ago
It was the turn of All Progressives Congress (APC), delegates yesterday, to exercise their mandate of choosing governorship candidates across the country, a day after the Peoples Democratic Party (PDP) conducted theirs.
Business News
Lagos, Ogun account for N3.2tr of Nigeria’s N3.7tr production output in H2 2021
1 hour ago
With a combined manufacturing production value of N3.2 trillion in the second half of 2021, Lagos and Ogun industrial zones are responsible for 86 per cent of manufactured goods consumed in the country and exported.
Politics
Odds and circumstances surrounding APC, PDP Presidential top contenders
1 hour ago
Apart from the contentious issue of zoning, there are some crucial red lines limiting the progression of various presidential aspirants.
Politics
Abuja stands still for APC, PDP convention
1 hour ago
Abuja, the Federal Capital Territory (FTC), is in upbeat mood, as the city prepares to host what has been termed a political festival this weekend. But that cosy scenario would hide a multitude of sins and what has been a chaotic, and at times, disastrous process of preparation for the political feast.

Sport
Man City extend lead to 8 points as Chelsea stumble
5 Dec
Manchester City extended their lead at the top of the Premier League to an ominous eight points on Wednesday, beating Brentford 1-0 as Chelsea conceded a last-gasp equaliser at home to Brighton.

Sport
Tuchel says Chelsea title talk 'stupid'
30 Dec
Thomas Tuchel has dismissed talk of Chelsea competing for the Premier League title as "stupid", given how badly his squad have been hit by Covid-19 and injuries.

Sport
Man City's Foden promises no let-up in title pursuit
30 Dec
Manchester City's Phil Foden has insisted there is no danger of the reigning champions becoming complacent in their pursuit of another Premier League title.