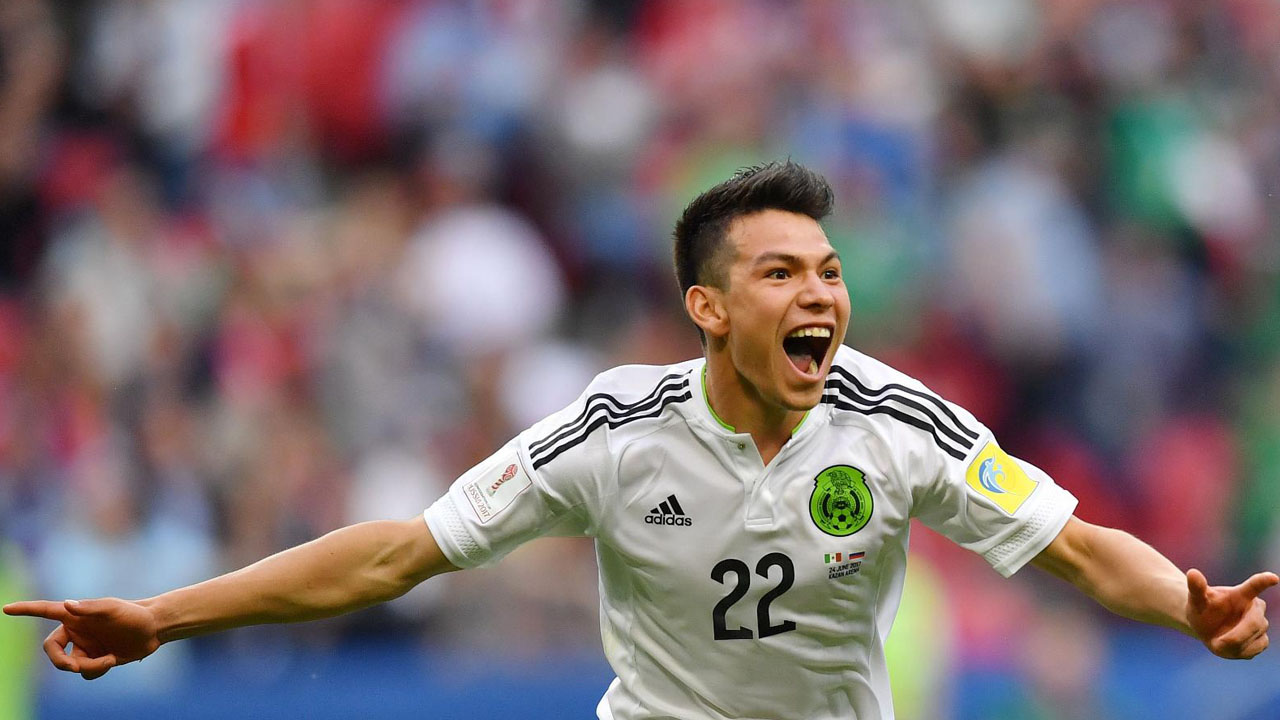 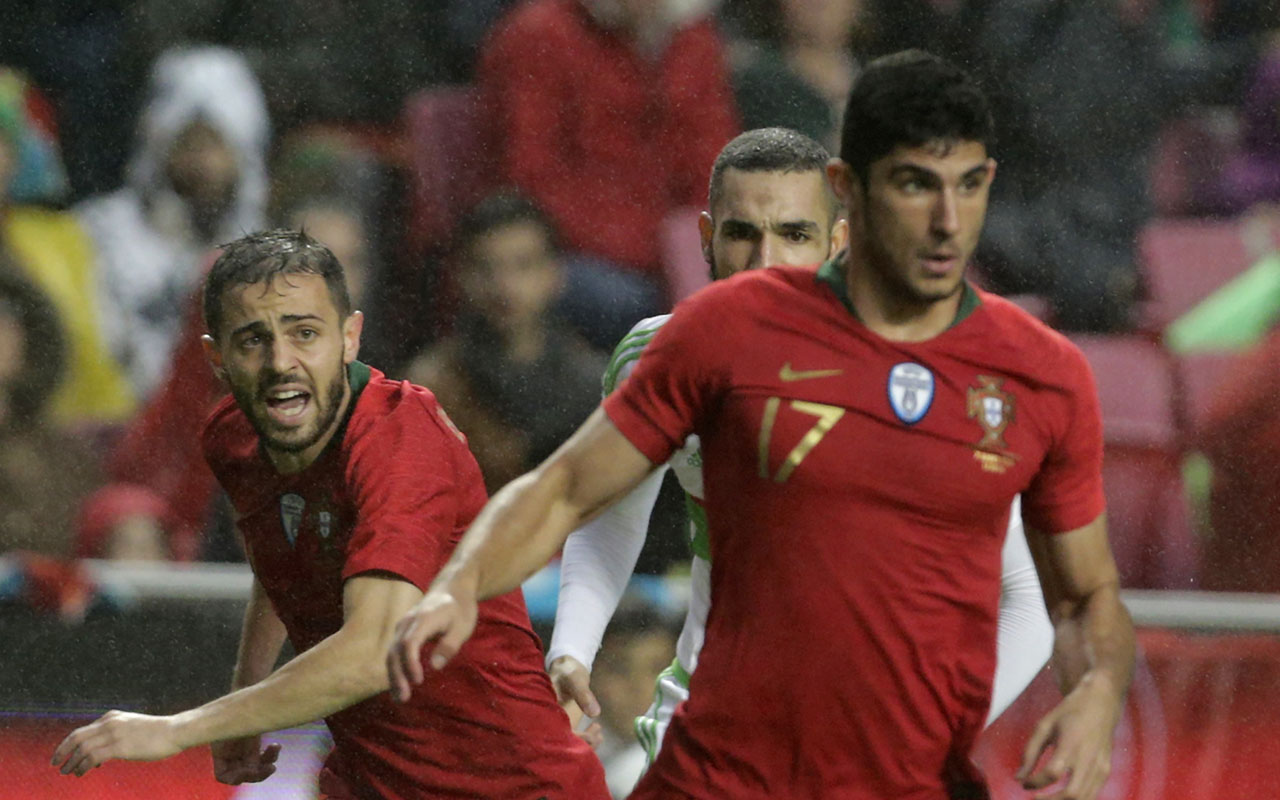 Portuguese forward Gonçalo Guedes (R) controls the ball in front of his teammate midfielder Bernardo Silva during the friendly football match between Portugal and Algeria, on June 7, 2018 at the Luz stadium in Lisbon. / AFP PHOTO / JOSE MANUEL RIBEIRO 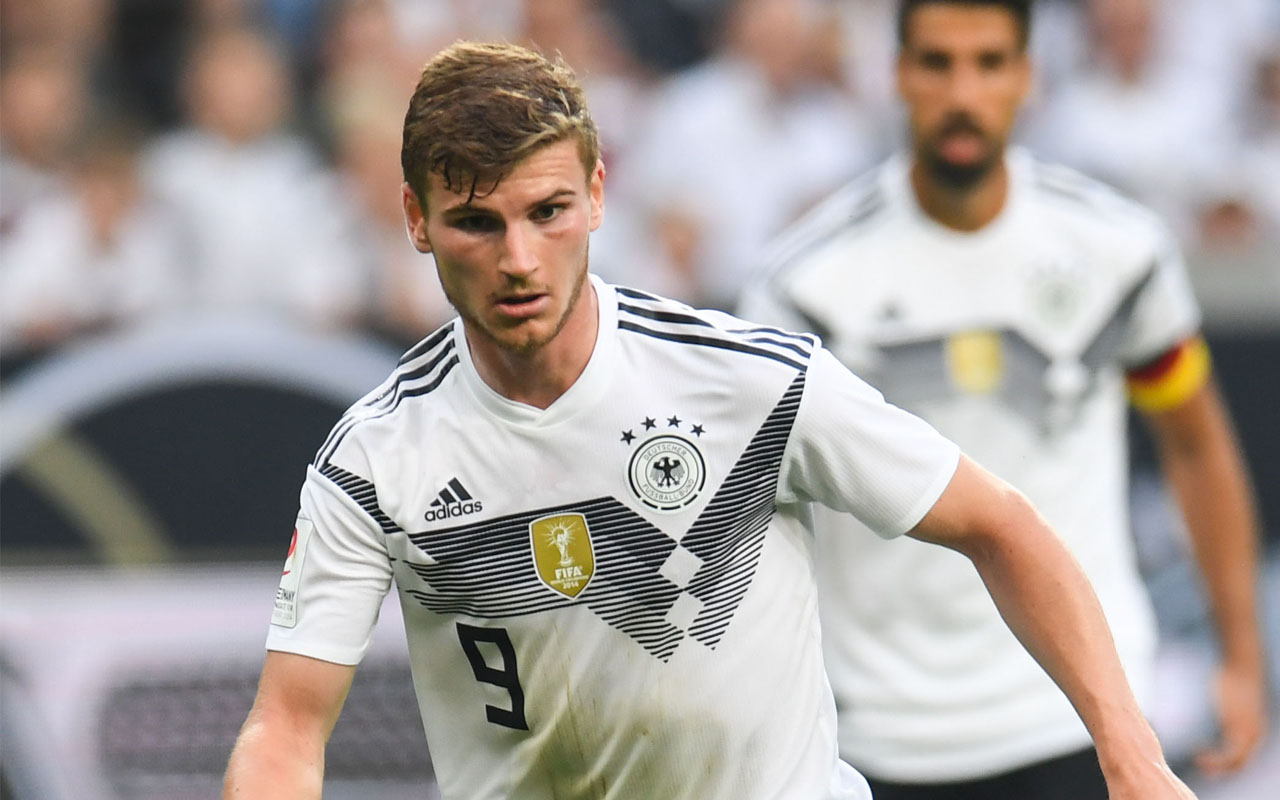 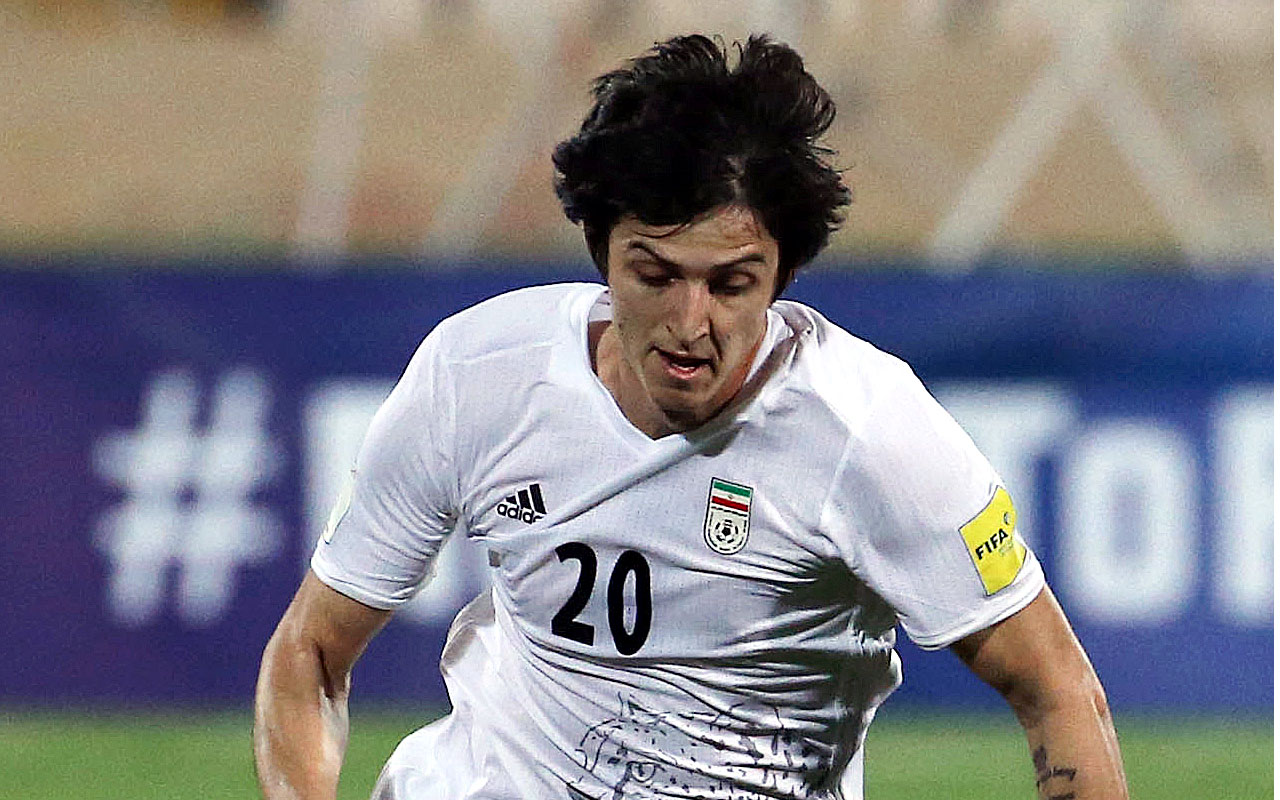 (COMBO) This combination of file pictures created on June 13, 2018 shows Iran's forward Sardar Azmoun (L) in Tehran on June 12, 2017 and Morocco's midfielder Hakim Ziyech in Geneva on May 31, 2018. Playing in their fifth finals and ranked 36 by FIFA, Iran begin their 2018 World Cup campaign against Group B rivals Morocco on June 15, 2018. / AFP PHOTO / Atta KENARE AND Fabrice COFFRINI 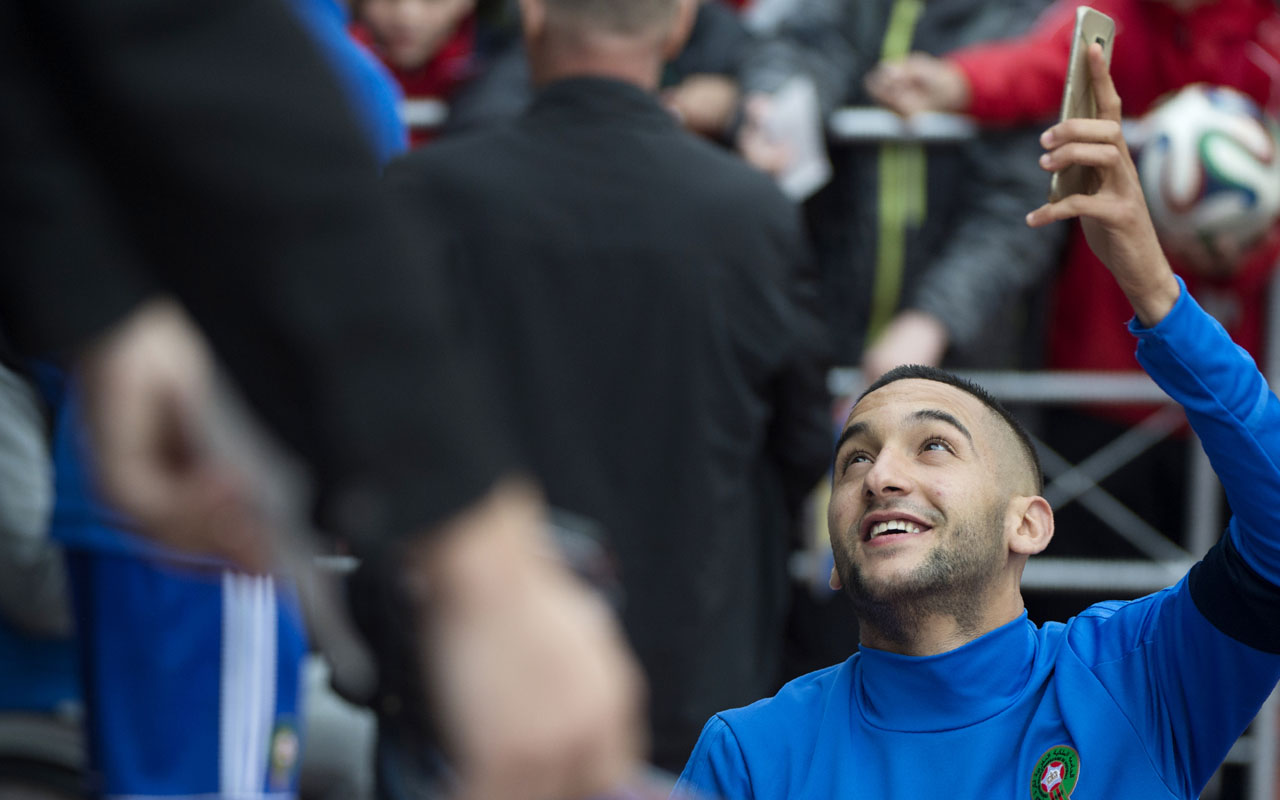 Morocco's midfielder Hakim Ziyech takes pictures with his mobile phone as fans greet him at the end of a training session of the Moroccan national football team in Voronezh on June 13, 2018, ahead of the Russia 2018 World Cup football tournament. / AFP PHOTO / FADEL SENNA
Lionel Messi, Cristiano Ronaldo and Neymar are all aiming to leave an indelible mark on the World Cup but with billions watching, it is the perfect stage for a new generation to showcase their talents.

AFP Sport looks at five players who could emerge as breakout stars in Russia.

Hirving Lozano (Mexico)
Temperamental but extremely gifted, Hirving Lozano followed in the footsteps of a number of Latin American stars by swapping home for an introductory taste of European football in the Netherlands. He hit 17 goals in 29 games in his debut season abroad as PSV Eindhoven won the Dutch title and has drawn comparisons with Luis Suarez — both for his ability and disposition — while placing Europe’s bigger clubs on alert. He has a knack for the spectacular, scoring the winner for Pachuca minutes into his professional debut, while needing just half an hour to find the net for PSV. At 22, the hope is “Chucky” will mature given time, with Mexico coach Juan Carlos Osorio counting on him to sparkle.

Goncalo Guedes (Portugal)
Offloaded to Valencia on loan after finding himself stuck behind a queue of talent at Paris Saint-Germain, Goncalo Guedes played just one minute of Portugal’s qualifying campaign. After a frustrating yet brief spell in France, a brilliant start with his new club in La Liga thrust him back into the national team spotlight. The 21-year-old scored five goals and laid on 11 assists to help Valencia earn a place in the Champions League, and struck twice in his country’s final World Cup warm-up match against Algeria to further advance his case for a starting berth in Russia. Powerful and capable of slashing through defences, whether by dribbling or passing, Guedes could leave PSG with a fight on their hands to keep hold of a talent whose potential is far from fulfilled.

Timo Werner (Germany)
Regarded as the heir to Germany’s record goalscorer Miroslav Klose, Timo Werner already boasts vast Bundesliga experience and a tendency to deliver on the big occasions. The 22-year-old was the top scorer at last year’s Confederations Cup, won by Germany, and a return of seven goals in 12 appearances since his international debut in March 2017 suggests he will be a mainstay in the national team for the next decade. Armed with searing pace — he was clocked running 100 metres in 11.1 seconds — the RB Leipzig forward is a constant threat on the counter and thrives by hanging on the shoulder of the last defender. A deep run by Germany in Russia could set Werner up for a shot at the tournament’s golden boot.

Sardar Azmoun (Iran)
Sardar Azmoun has been piling up the international goals for an Iran squad that has regularly superseded expectations. With 23 international goals in just 32 games, the 23-year-old is already fifth on Iran’s list of all-time leading scorers. Azmoun was a standout volleyball player as a teenager before concentrating solely on football, and uses his athleticism and acceleration to great effect. He was snapped up by Rubin Kazan in 2013 and while Arsenal and Liverpool have reportedly showed interest in the past, he remains in Russia. He will team up with Alireza Jahanbakhsh, who became the first Asian to finish as the Dutch league’s top scorer this season, as Iran try to punch above their weight in a section featuring Portugal and Spain.

Hakim Ziyech (Morocco)
A Dutch youth international, Hakim Ziyech ultimately elected to represent Morocco rather than the country of his birth in 2015. It was a decision blasted by Netherlands great Marco van Basten but one that helped Morocco end a 20-year World Cup absence. An attacking midfielder with the facility to penetrate the opposition, he is the fulcrum in an underrated Morocco side and has an eye for goal, finding the net eight times in 15 matches. Two prolific seasons at Twente earned him a move to Ajax in 2016 but the 25-year-old is looking for a new challenge after landing the league’s player of the year award and will be desperate to prove his value in Russia.

Sport
Holders Algeria stunned by Equatorial Guinea at Cup of Nations
1 hour ago
Reigning champions Algeria are in danger of an early exit from the Africa Cup of Nations after a shock 1-0 defeat at the hands of outsiders Equatorial Guinea in Douala on Sunday.
Sport
Real Madrid defeat Athletic Bilbao to win Spanish Super Cup
1 hour ago
Real Madrid won the Spanish Super Cup by beating Athletic Bilbao 2-0 on Sunday as Luka Modric and a Karim Benzema penalty secured a comfortable victory in Saudi Arabia.
Sport
Oliveira hands Roma tight Cagliari win on debut
3 hours ago
Sergio Oliveira was decisive on his Roma debut after scoring the penalty which gave his new team a 1-0 win over struggling Cagliari on Sunday, before leaders Inter Milan face a tough test at Atalanta.
Sport
Goalkeeping gaffe allows Sierra Leone to snatch draw with Ivory Coast
3 hours ago
Alhaji Kamara bundled the ball into the net following an astonishing goalkeeping blunder in injury time to give Sierra Leone a shock 2-2 draw with the Ivory Coast at the Africa Cup of Nations in Douala on Sunday.
Sport
Klopp urges Liverpool to believe chase of Man City is possible
4 hours ago
Jurgen Klopp insisted Liverpool will not give up the chase of Manchester City at the top of the Premier League after bouncing back to winning ways to beat Brentford 3-0 on Sunday.

Sport
AFCON 2021: Osimhen, Dennis, Balogun pull out of Nigeria squad
31 Dec
Nigeria strikers Victor Osimhen and Emmanuel Dennis have pulled out of the Super Eagles squad for the 2021 African Cup of Nations (AFCON) in Cameroon. The Nigeria Football Federation (NFF) announced the withdrawal of Osimhen, Dennis, Rangers defender Leon Balogun and Abdullahi Shehu in a revised list for 2022 AFCON. Osimhen was excluded from the…

Sport
Lukaku 'not happy' at Chelsea under Tuchel
31 Dec
Belgium forward Romelu Lukaku said in an interview published on Thursday he is "not happy" at Chelsea after starting just eight league games this term.

Sport
Chelsea's Tuchel frustrated by 'noise' after Lukaku voices dissatisfaction
31 Dec
Thomas Tuchel admitted on Friday that he was frustrated with the "noise" around Romelu Lukaku's situation at Chelsea after the Belgium forward expressed his dissatisfaction with his role at the club.