Cavani's 'racism' ban: an attack on a culture?
3 hours ago  Sport

Fireworks and laser-lit choreography launched the Rio Games on Friday as Brazil sought to forget seven years of troubled preparations and the Olympic movement temporarily put aside its doping crisis.

Under the gaze of Rio’s Christ the Redeemer statue, 78,000 people packed into the Maracana Stadium to watch the four-hour party with Michael Phelps and other sporting superstars taking centre-stage in South America’s first Olympics.

Brazilian singer Paulinho da Viola sang the national anthem to set off the show of laser lights and elaborate dances highlighting Brazil’s history and rise as an emerging power.

Supermodel Gisele Bundchen strutted into the arena to the iconic “Girl From Ipanema” before Greece, home of the ancient Olympics, took its traditional place at the head of the athletes’ parade.

France’s President Francois Hollande and Argentina’s Mauricio Macri were among a handful of state leaders in the VIP box with Brazil’s troubled interim leader Michel Temer.

Organisers said the ceremony aimed to send a message of tolerance and respect. But it came as Brazil battles a crippling recession, double-digit unemployment and rising crime, and as Temer fights off political turmoil.

As the clock ticked down to the start of the ceremony, thousands of demonstrators took to the streets to vent their fury at Brazil’s rulers and the multi-billion-dollar cost of the Games.

Waving signs reading “No to the Olympics!”, about 3,000 people gathered outside the luxury Copacabana Palace Hotel where many Olympic athletes are staying.

Brazil has spent more than $10 billion on new infrastructure and preparing for the Games at a time of economic crisis. 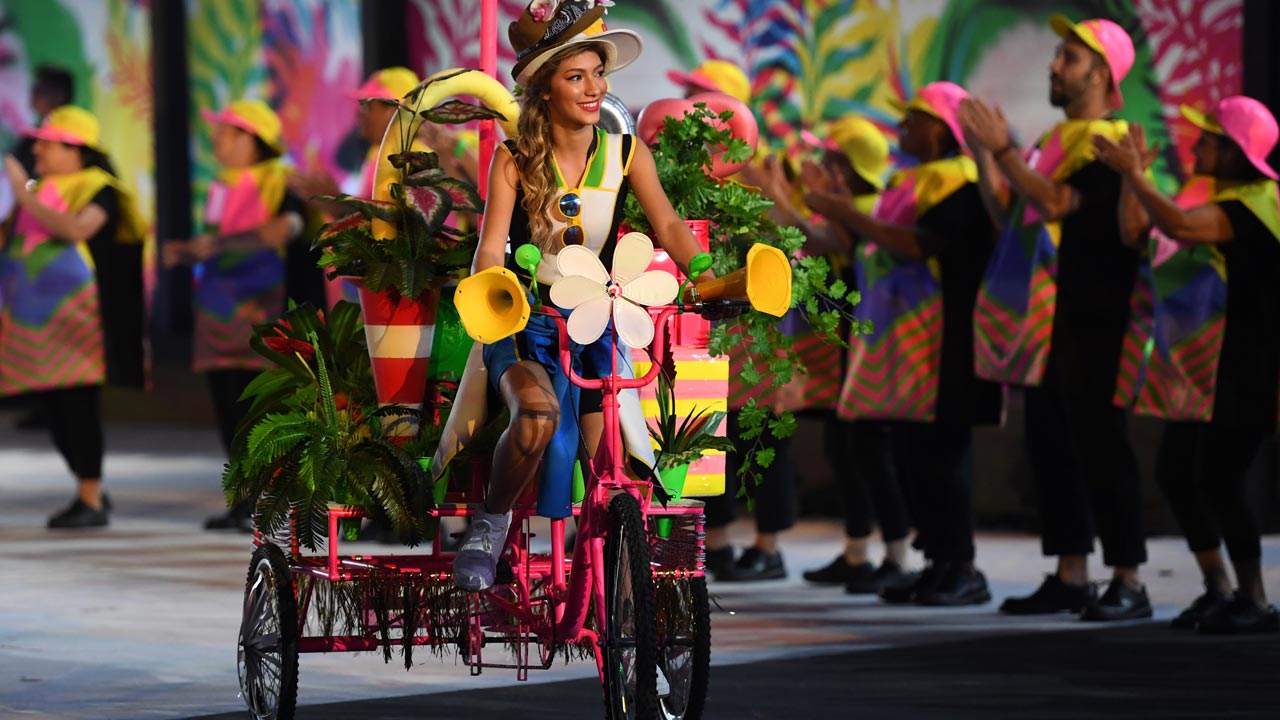 A woman on a bicycle leads a delegation during the opening ceremony of the Rio 2016 Olympic Games at the Maracana stadium in Rio de Janeiro on August 5, 2016. Jewel SAMAD / AFP 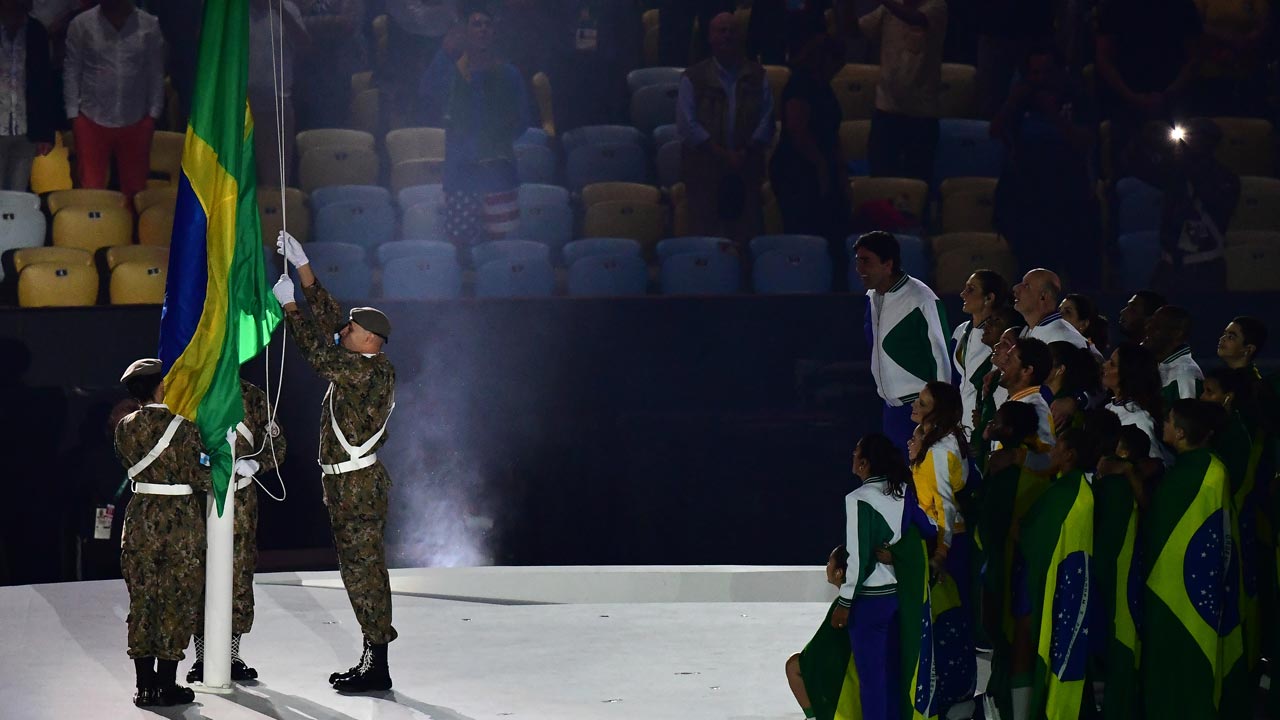 The Brazilian flag is raised as the national anthem is sung during the opening ceremony of the Rio 2016 Olympic Games at Maracana Stadium in Rio de Janeiro on August 5, 2016. Emmanuel DUNAND / AFP 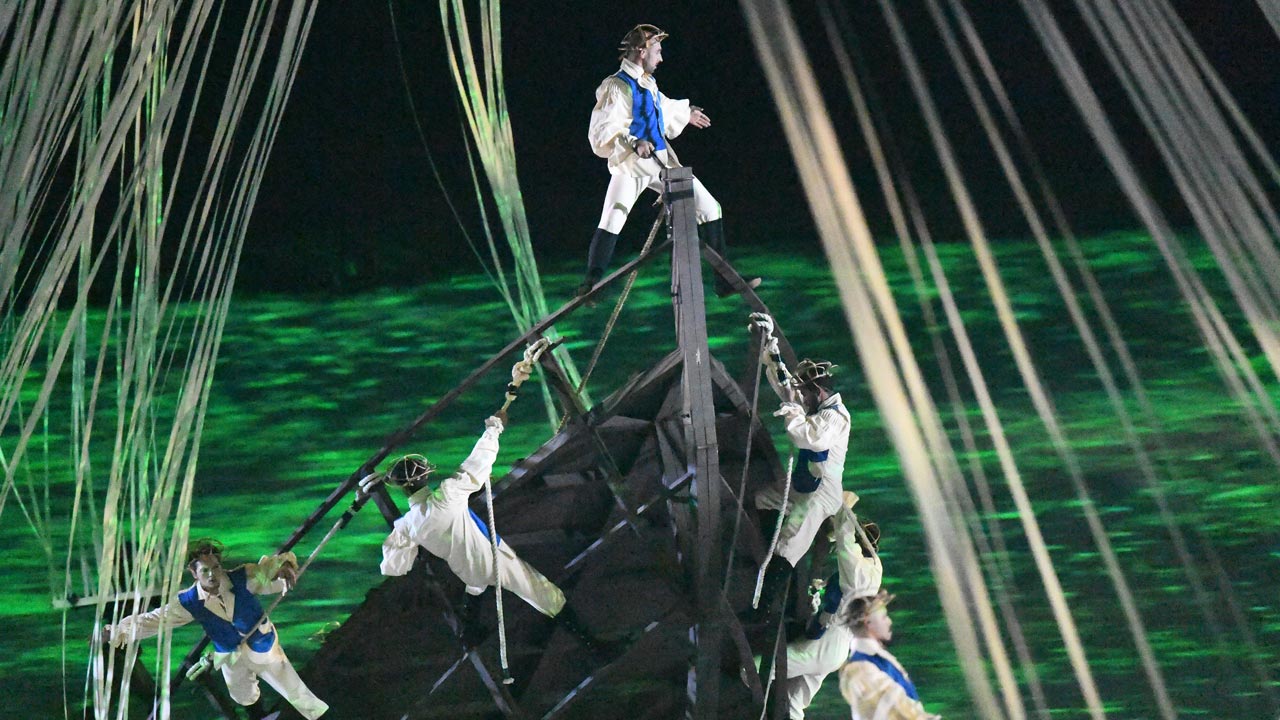 Artists perform during the opening ceremony of the Rio 2016 Olympic Games at the Maracana stadium in Rio de Janeiro on August 5, 2016. GABRIEL BOUYS / AFP 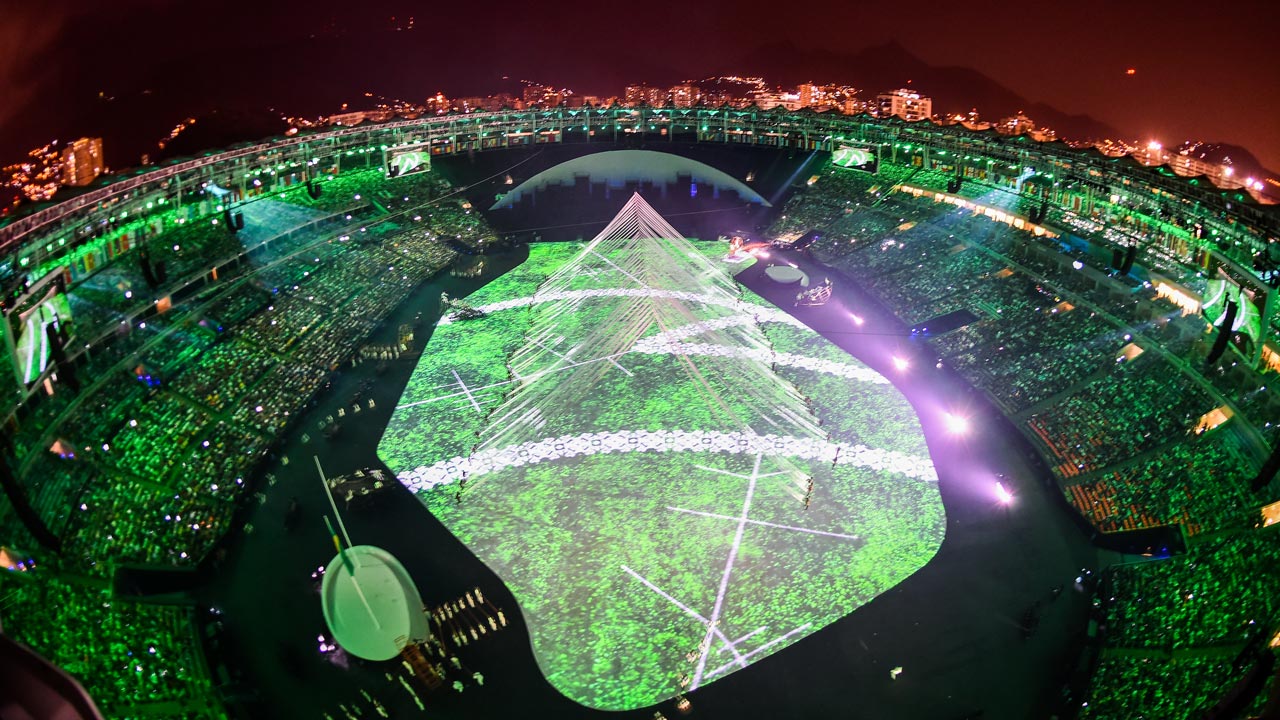 This picture shows an overview during the opening ceremony of the Rio 2016 Olympic Games at the Maracana stadium in Rio de Janeiro on August 5, 2016. François-Xavier MARIT / AFP 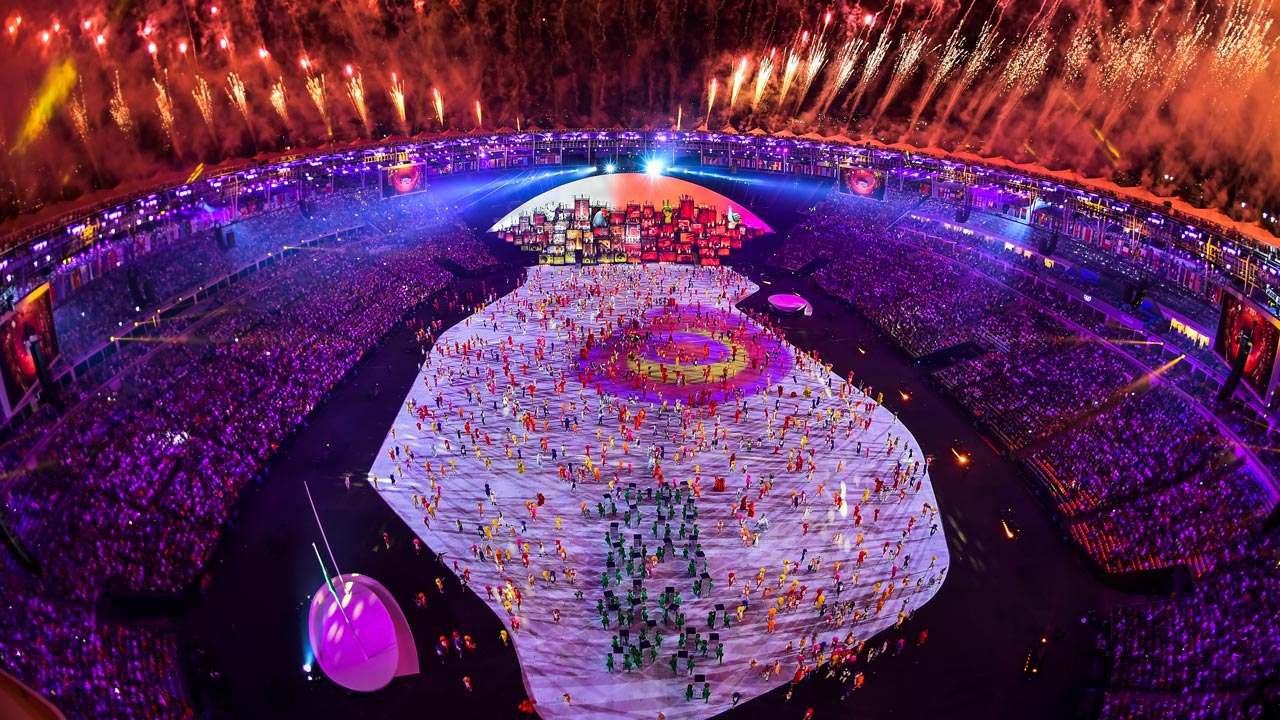 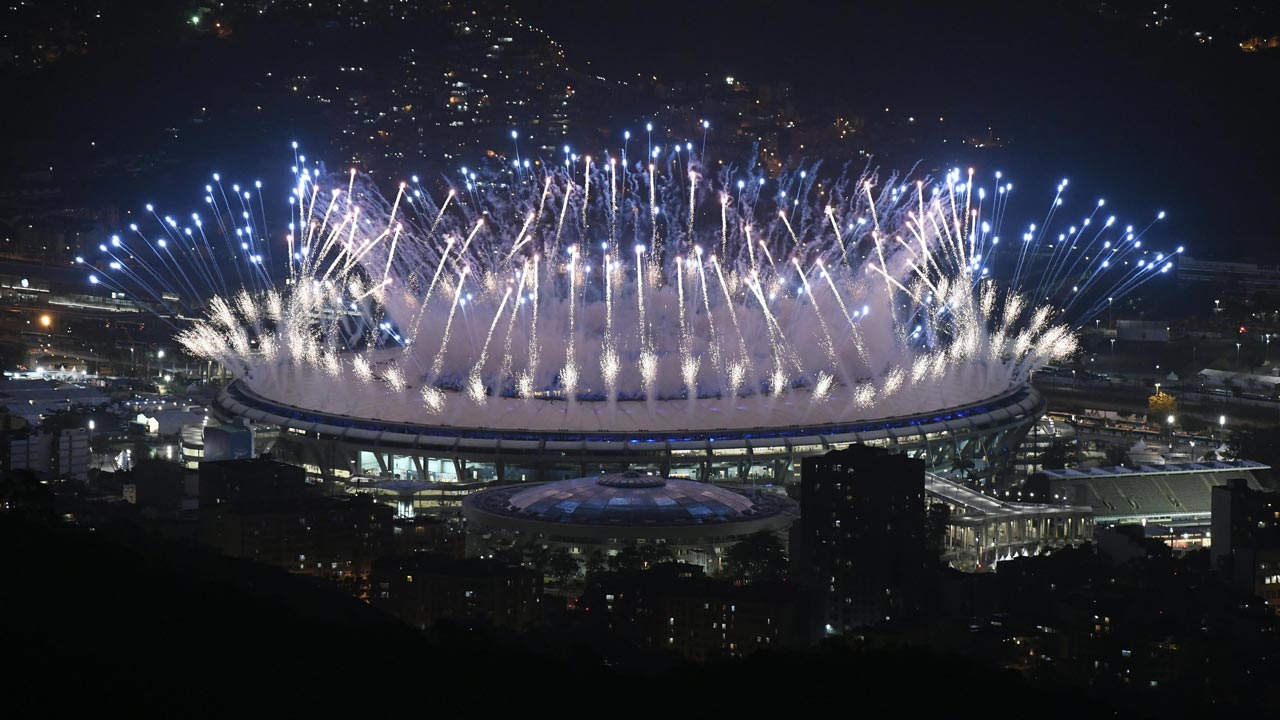 The Maracana stadium is lit by fireworks on August, 5 2016 in rio de Janeiro a few minutes before the Opening ceremony of the Rio 2016 Olympic Games. The carnival capital of the world is hoping Friday's extravaganza at the Maracana Stadium will draw a line under a turbulent seven-year build-up dogged by recession, rising crime and doping scandals. Damien MEYER / AFP 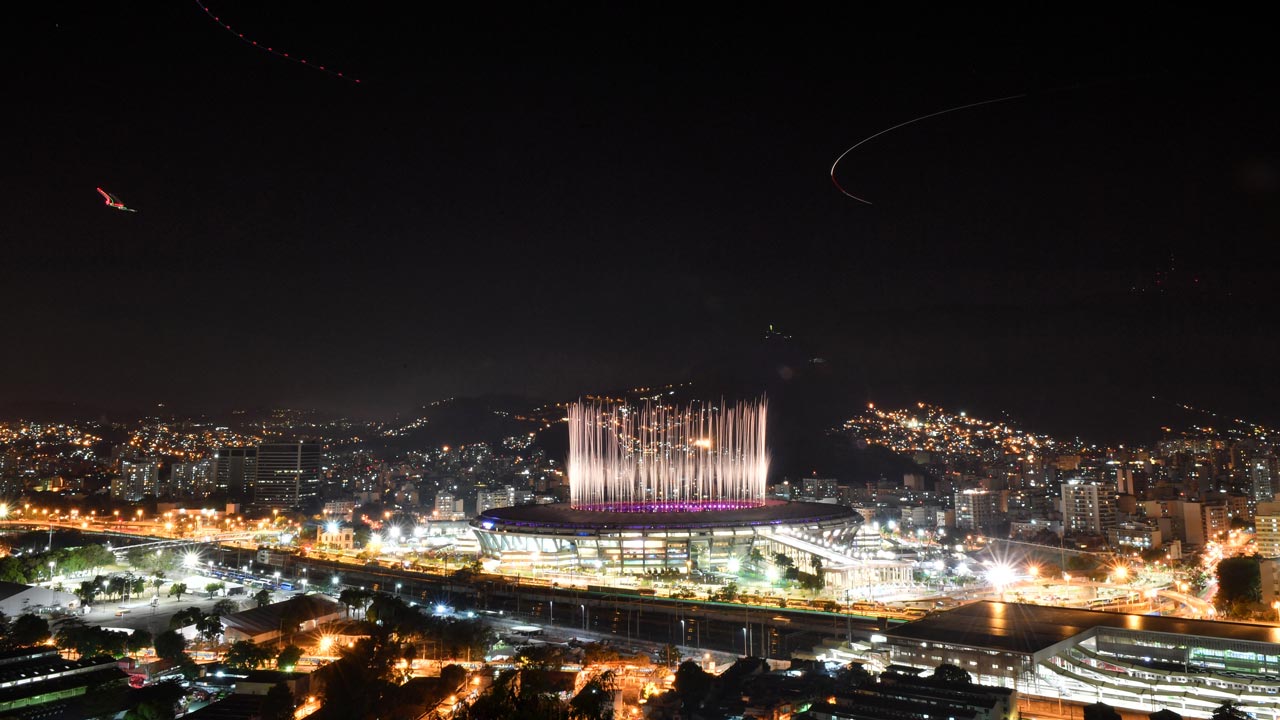 he Maracana stadium is seen from the favela Mangueira as fireworks explode during the opening ceremony of the Rio 2016 Olympic Games in Rio de Janeiro on August 5, 2016. Andrej ISAKOVIC / AFP

The billions lavished on the Games has angered many Brazilians as the country grapples with a tanking economy and mass social problems.

“This party wasn’t done for the people. The Games don’t come close to the reality lived by the poor. So I’m protesting against the lack of finances for our schools and for the way our salaries are only paid in instalments,” said teacher Guilherme Moreira Dias, 38.

The ceremony launches 17 days of sporting drama led by a cast of elite athletes including sprint king Usain Bolt and swimming superstar Phelps which wraps up on August 21.

As well as economic problems, Brazil is also in the grip of a political crisis which led to the impeachment of President Dilma Rousseff. She refused to attend the ceremony, leaving Temer in her place with a hostile reception from the crowd predicted.

At most Games the lighting of the Olympic flame is a highlight. Who will light the cauldron remains a closely guarded secret after Brazilian football great Pele, 75, said he turned down the honour because of poor health.

A vast security blanket of 85,000 military and police — twice the number on duty at the 2012 London Games — will be draped over the city to ward off the threat of street crime and terror attacks.

That has not been able to offer total protection, with a spate of thefts from the athletes’ village. The Danish, Chinese and Australian delegations have all reported items stolen. Journalists’ cameras and laptops have also been targeted for thefts.

Anticipation for the sporting battles has been eclipsed by fallout from the Russian doping scandal that has caused a rift between the International Olympic Committee (IOC) and the World Anti-Doping Agency.

The IOC’s decision not to impose a blanket ban on Russia over revelations of a state-sponsored doping program opened the door to legal turmoil which left the precise make-up of the Russian team in limbo.

On Thursday, the IOC confirmed the Russian team would be made up of 271 athletes, with 118 eliminated because of the drug scandal.

The first gold medal will be awarded on Saturday in shooting and all eyes will be on American swimming star Phelps, the most decorated Olympian in history, when he returns to the pool in the first week.

Track and field will see Jamaican star Bolt aim to defend his 100m, 200m and 4x100m crowns by clinching all three for the third straight Games.

Gymnastics, meanwhile, could see the world find a new darling in America’s teenage star Simone Biles, while rugby and golf return to the Olympic programme after gaps of 92 years and 112 years respectively.

Tyler Perry To Receive Humanitarian Award At The Oscars
19 mins ago  What's New
France says pharma giant Sanofi could make rivals' Covid vaccines
19 mins ago  World
An Army at War: A Case for Better Funding
22 mins ago  Features
COVID-19: NAFDAC has not approved any vaccines — DG
42 mins ago  Nigeria
Reimburse us money spent on your roads - Gombe pleads with FG
51 mins ago  News