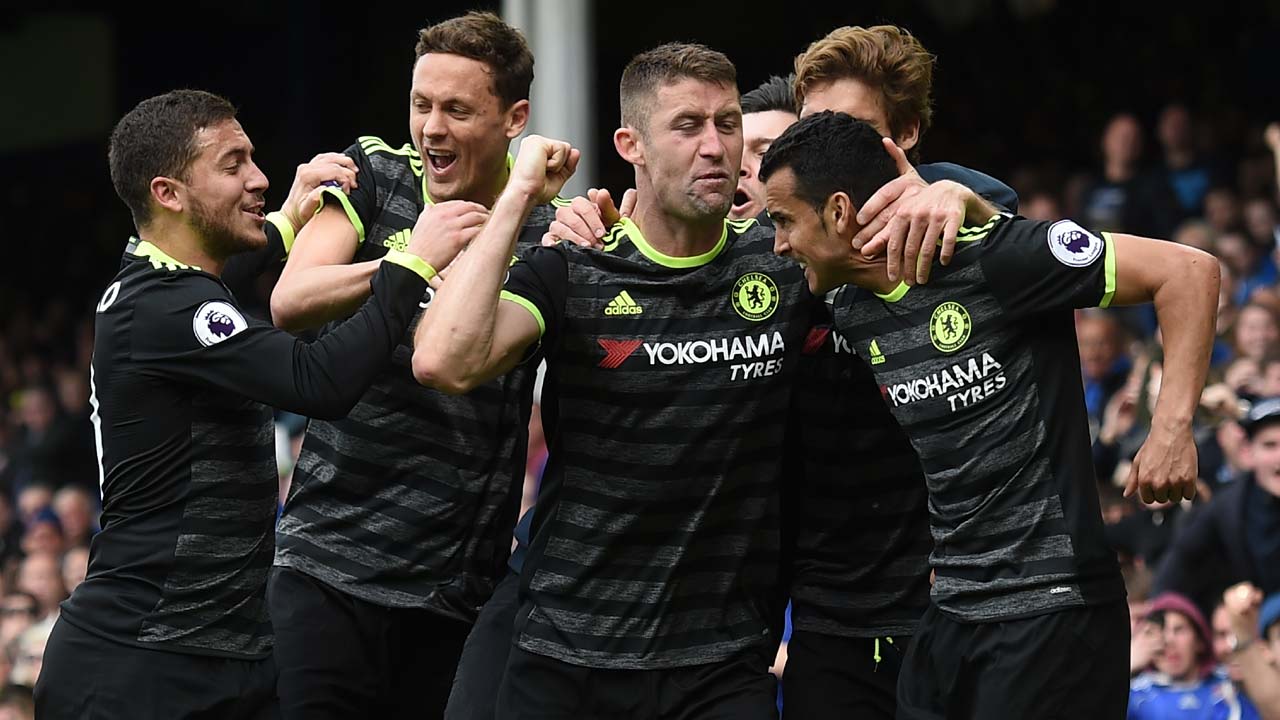 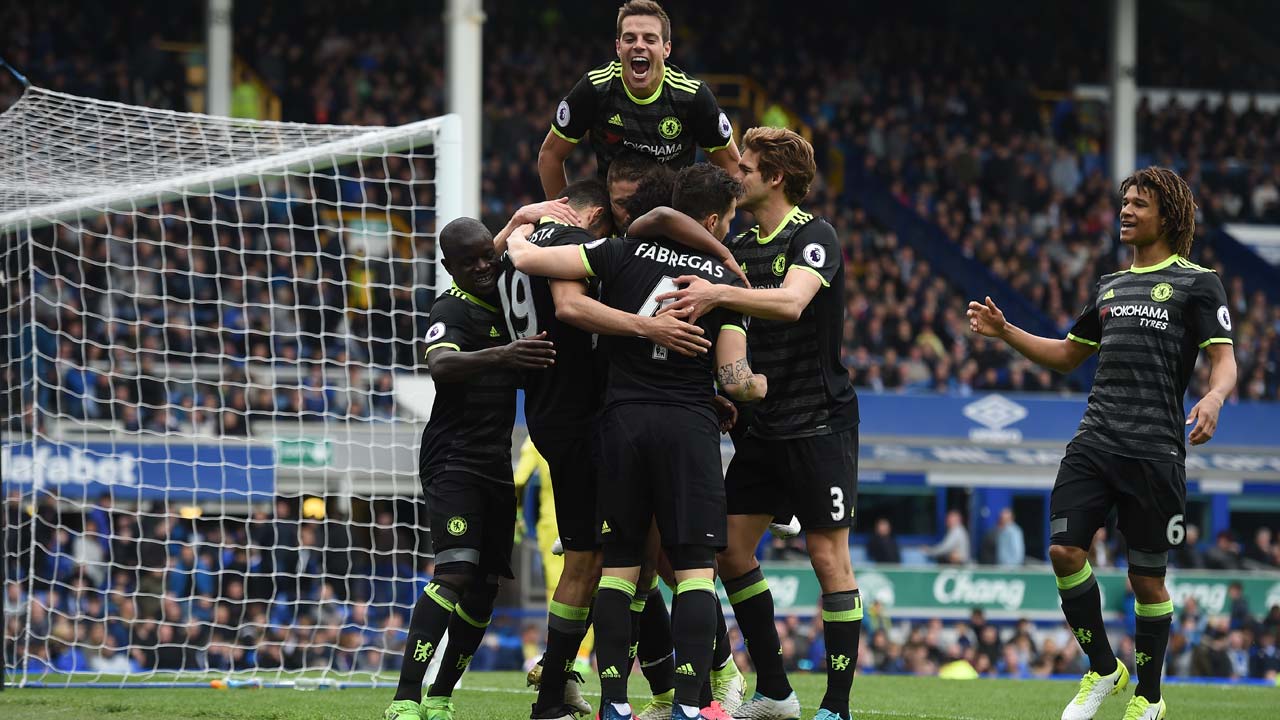 Pedro’s sublime strike fired Chelsea a step closer to the Premier League title as the ruthless leaders swept to a 3-0 win at Everton on Sunday.

Antonio Conte’s side had to work hard to break down Everton’s stubborn resistance, but Pedro’s majestic second-half goal put Chelsea on course for a fourth win in their last five league games.

Late goals from Gary Cahill and Willian wrapped up the victory as the Blues opened up a seven-point lead at the top, piling pressure on second-placed Tottenham ahead of their derby against Arsenal later on Sunday.

Regardless of the result at White Hart Lane, Chelsea’s steely display ensured the destiny of the title remains in their hands with four matches left against Middlesbrough, West Bromwich Albion, Watford and relegated Sunderland.

Chelsea need nine points to be assured of being crowned English champions in Conte’s first season in charge.

“We had a lot of patience for the right moment to hit. We deserved the win,” Conte said.

“We scored an amazing goal with Pedro. This gives us lots of confidence.

“Now it is important to prepare for the final rush. We must look step by step.”

After defeats against Manchester United and Crystal Palace raised questions about their ability to get over the finish line, Chelsea have been revitalised by their FA Cup semi-final win over Tottenham.

They beat Southampton in midweek to re-establish control of the title race and ending Everton’s eight-match winning streak at home was another significant step towards the title.

Restoring Pedro to the starting line-up in place of Cesc Fabregas, Conte put the emphasis on attack, but the leaders were nearly caught cold at the back in the opening minutes.

Dominic Calvert-Lewin wriggled free for a shot from a tight angle that deflected onto a post and rebounded to Romelu Lukaku, whose close-range strike was goalbound until Cahill came to the rescue with a last-ditch block.

Chelsea squandered a chance to take the lead when Diego Costa scampered away from the Everton defence and picked out Eden Hazard’s run.

As Hazard latched onto the pass and rounded Maarten Stekelenburg a goal seemed certain, but the Belgian’s touch wasn’t quite delicate enough and his shot drifted into the side-netting.

Thunderbolt
Costa looked furious after a full-blooded lunge from Tom Davies left him crumpled on the turf and he had a golden opportunity to get revenge when Everton made a hash of dealing with a long pass from David Luiz.

Costa won the header and was unchallenged as he spun to volley goalwards, yet the Spaniard still contrived to smash his close-range shot high over the bar.

The miss nearly came back to haunt Chelsea when Lukaku bullied his way through for a low shot that whistled just wide from the edge of the area.

In need of inspiration to break down obdurate Everton, Conte’s men went close early in the second half when a clever short corner routine set up Victor Moses for a shot that was deflected wide.

Enner Valencia threatened to rock the visitors as the Everton forward escaped on the touchline and tested Thibaut Courtois from an acute angle.

But Chelsea kept probing and their persistence was rewarded with Pedro’s thunderbolt in the 66th minute.

A sustained period of Chelsea pressure pushed Everton deep into their own penalty area and when the ball was worked to Pedro in a central position the Spanish winger uncorked a fierce 20-yard strike that flashed into the roof of the net for his first goal since February.

With 11 minutes left, Hazard’s low free-kick was pushed out by Stekelenburg and Cahill tapped in to trigger chants of “Tottenham, we’re waiting for you” from Chelsea’s jubilant travelling fans.

There was still time for Willian to come off the bench and apply the finishing touch to an incisive raid in the 86th minute.