By Editor
Following a successful webinar that took place on the 27th of June 2020 where a lot of women highlighted the insurgence of rape, its life-damaging effects and possible solutions to ENDING THE CULTURE OF IMPUNITY IN CASES OF RAPE and GENDER-BASED VIOLENCE in our communities. The Movement Against Rape & Sexual Violence (MARS-V) is set…

Following a successful webinar that took place on the 27th of June 2020 where a lot of women highlighted the insurgence of rape, its life-damaging effects and possible solutions to ENDING THE CULTURE OF IMPUNITY IN CASES OF RAPE and GENDER-BASED VIOLENCE in our communities. 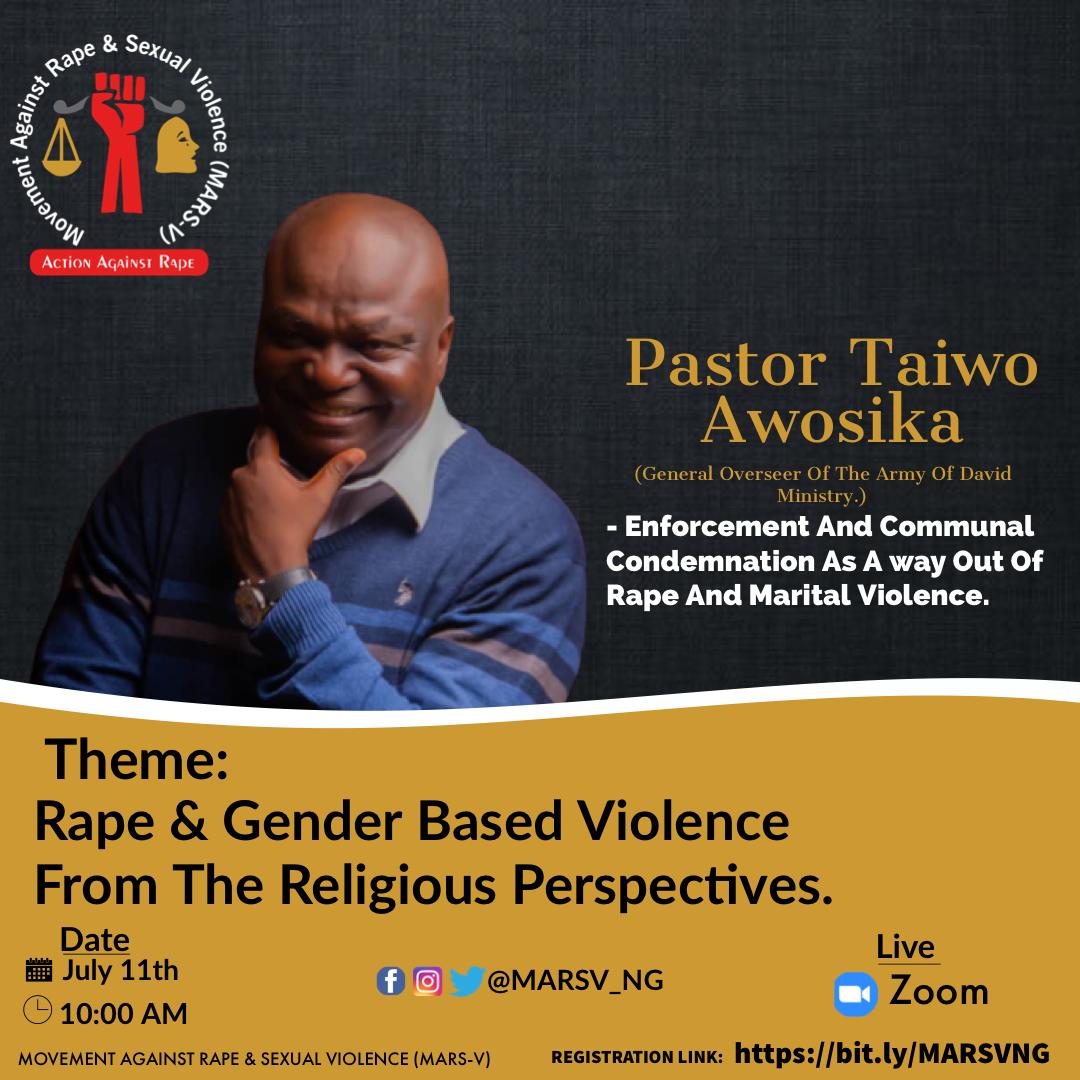 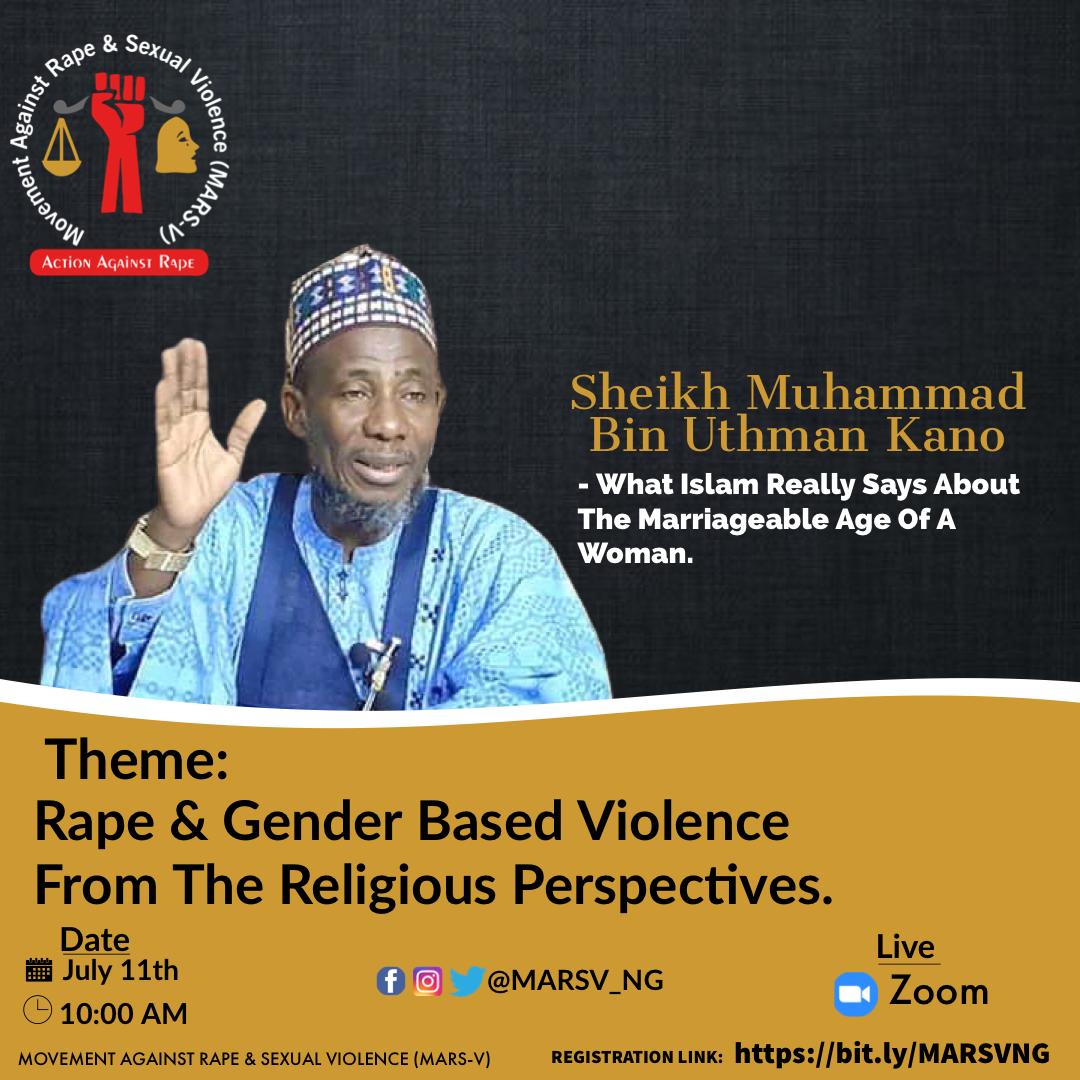 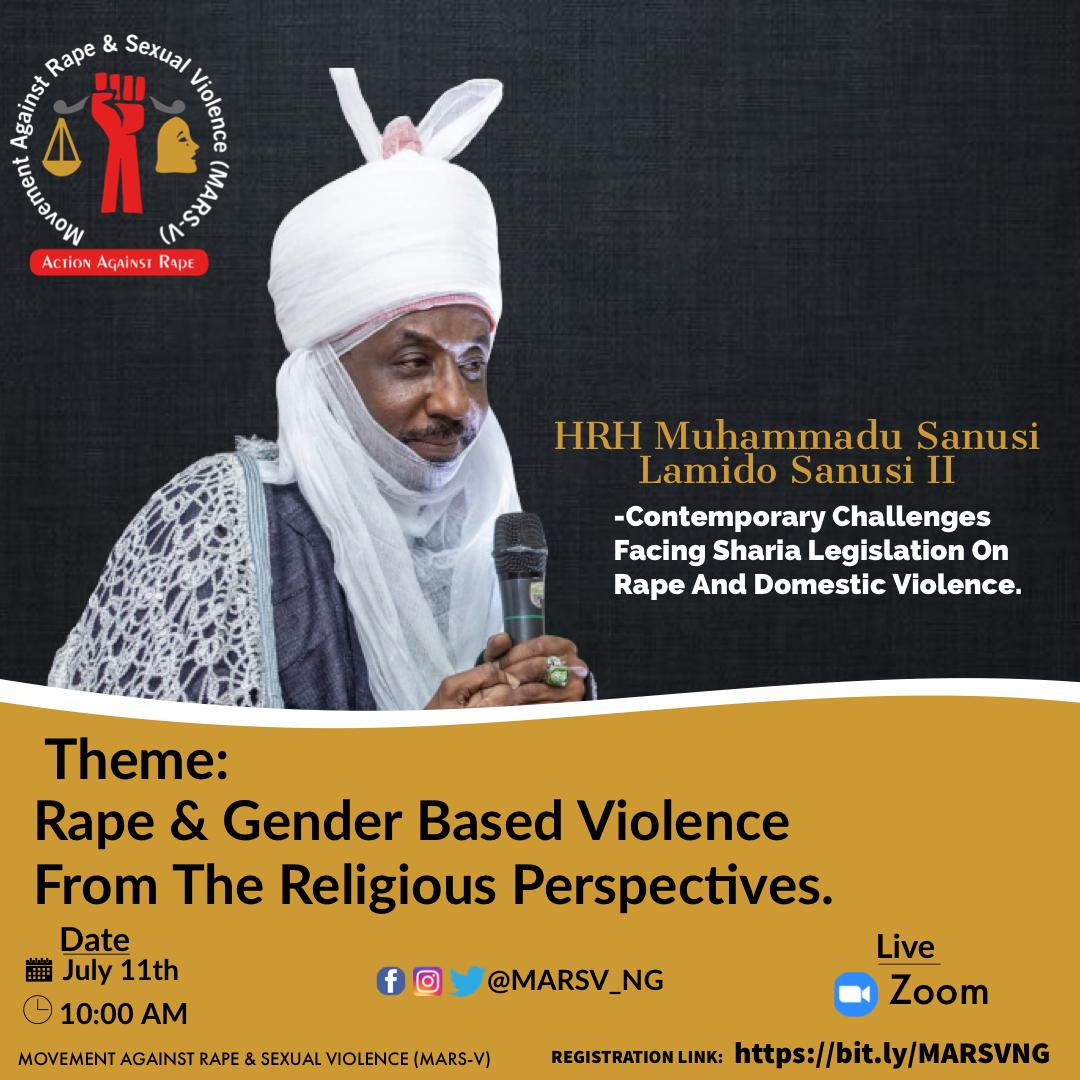 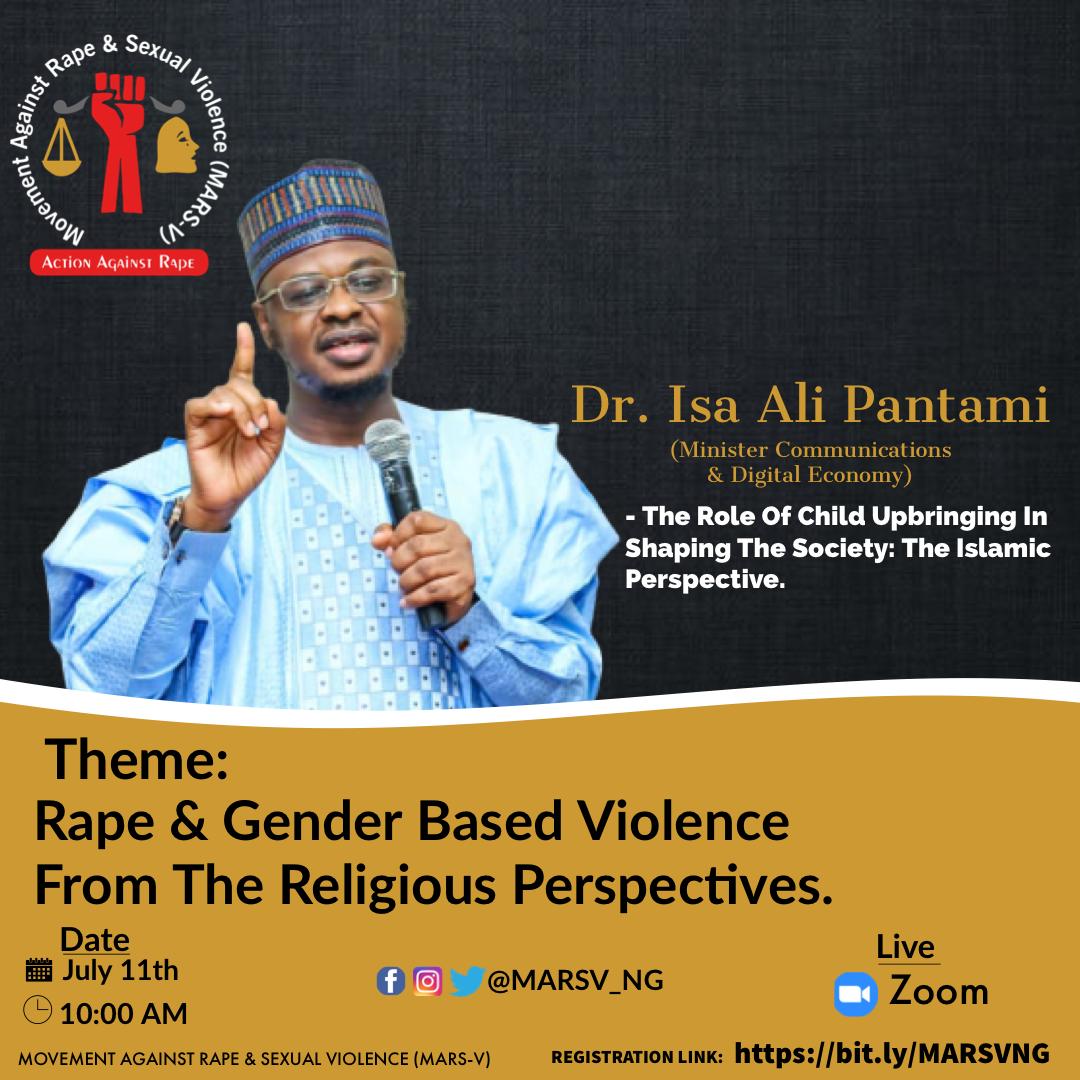 The Movement Against Rape & Sexual Violence (MARS-V) is set to host yet another insightful conversation to prompt members of the public to join the fight against rape and gender-based violence.

This webinar is themed around religious stances, perceptions and laws on rape and gender-based violence. It also seeks answers surrounding early girl child marriages, as one of the impeding reasons for the reluctance of some states to adopt laws that can protect children and women from GBV.

The webinar will ultimately highlight the detrimental religious misconceptions that our communities impose upon themselves and also shows the role that everyone needs to play in joining the local and global fight against Rape & Gender-Based Violence.

The Webinar is scheduled to take place this Saturday, July 11th, 2020 at 10 am. Attendees are asked to register to attend the webinar via this zoom link: https://bit.ly/MARSVNG

“The selection of this panel is deliberate,” MARS-V said in a statement.

“These are our HE FOR SHE HEROES who understand the need for men to support the fight against RAPE and GBV and they are standing up for the truth with religious facts.

“Women have been speaking about these issues and not much has been done in RESPONDING to them.

“This panel consists of men who every other man needs to listen to; in understanding the crime against women and children. Since mostly Men are accused of rape and GBV. Men should also talk about it and support women to fight against it.

“We will continue to exhaust every angle possible and tap into every heavy voice (of both genders) in addressing Rape and GBV.”

Topics to be covered in the course of this webinar include:- Issues Affecting the Girl Child ~ An Islamic Perspective; Contemporary Challenges Facing Sharia Legislation on Rape and Domestic Violence; The Responsibility of Parents on The Upbringing and Protection of their Children against rape; The Religious Perception & Penalty for Rape, Including “Marital Rape”; The Role of Child Upbringing in Shaping the Society: The Islamic Perspective; The Marriageable Age of a Woman – From the Perspective of Christianity, Enforcement and Communal Condemnation as a way Out of Rape and Marital Violence; What Islam Really Says About the Marriageable Age of a Woman, Misogyny and its Relation to Rape; Rape, Nonviolent Rape and The Misconceptions in Islam etc.

This event will be moderated by FAIZ MUHAMMAD ALIYU.

Register to join the conversation via https://bit.ly/MARSVNG

Nigeria
Appeal panel upholds victory of Famodun’s exco at Osun APC congress
28 mins ago
The All Progressives Congress (APC) State Congress Appeal Committee for Osun State has upheld the election and victory of Gboyega Famodun as the authentic chairman of the party in the state.
Opinion
One year after #EndSARS, the Nigerian system is still 'begging' for transparency, accountability
1 day ago
In October 2020, the eyes of the World were on Nigeria as the #EndSARS protests – the largest anti-government protests in a generation – took on corrupt elites. The demonstrations began as a movement against police brutality but rapidly snowballed into wider calls for government reforms – in particular, greater accountability. If nothing else, the…
Guardian Life
Arts Meets Whisky With Glenfiddich’s Grande Couronne
1 day ago
Glenfiddich, the World’s Most Awarded Single Malt Whisky, earlier this year unveiled Grande Couronne, the newest addition to its Grand Series. The maverick whisky brand continues to challenge conventions with the unexpected marriage of two luxury worlds. The bottle and packaging are adorned with ornamental gold filigree, whilst exquisite artwork reminiscent of great renaissance paintings…
World
UK 'cooperating' with Kenya murder inquiry
1 day ago
The British High Commission in Nairobi on Sunday said it was "fully cooperating" with a police investigation into the 2012 murder of a Kenyan woman last seen with a British soldier.
Nigeria
Buhari to participate in investment summit in Riyadh, South Arabia
1 day ago
President Muhammadu Buhari will on Monday depart for Riyadh, Saudi Arabia, to participate in the investment conference organised by the Future Investment Initiative Institute.

Gender
BMGA Enterprise, ACU partner to narrow gender skills gap
9 Mar
BMGA Enterprise Limited (BMGA), an edtech finishing school for the next Information Revolution and the Association of Commonwealth Universities (ACU), an international university network, have announced a partnership agreement. The partnership aims to provide young women across Commonwealth countries with the knowledge and resources required to gain fundamental soft skills that strengthen their marketability for…

Gender
Women surviving by driving in Lagos chaotic transport sector
31 Mar
Oluwakemi Samuel, a fashion designer and a mother of three, closed down her shop in January 2020 and opted to drive an interstate commercial bus. In the last one year, she has been ferrying passengers between Oju-Ore in Ogun State and Abule Egba in Lagos . Before opting to sit behind the wheels of a…

Gender
Tallen hails bills seeking to create 111 special seats for women in NASS
1 May
The minister of women's affairs, Pauline Tallen, has hailed efforts by members of the National Assembly to create one hundred and eleven, (111), additional special seats for women in the political arena, saying it is a step in the right direction.  Tallen said the bill sponsored by the Deputy Chief Whip, Nkiruka Onyejiocha, which has…

Gender
Ending violence against women: Minister calls for gender indicators in data generation
16 Jun
For better planning and monitoring of issues relating to women and girls, Dame Pauline Tallen, the Minister of Women Affairs, has called for the inclusion of gender-based indicators in data generation across the country. The minister made the call while declaring open the ongoing five-day gender-based violence data indicator harmonisation workshop for the National Strategic…

Gender
Closing the gap: A call to change the gender data narrative
14 Jul
Gender data has remained skewed for many years. To date, we fall behind in scaling up the numbers reported. A deep look at the Global Monitoring Media Report (GMMP) 2020 reveals that women are still poorly represented across many important economic and social sectors. However, some progress has been made in increasing women's roles in…