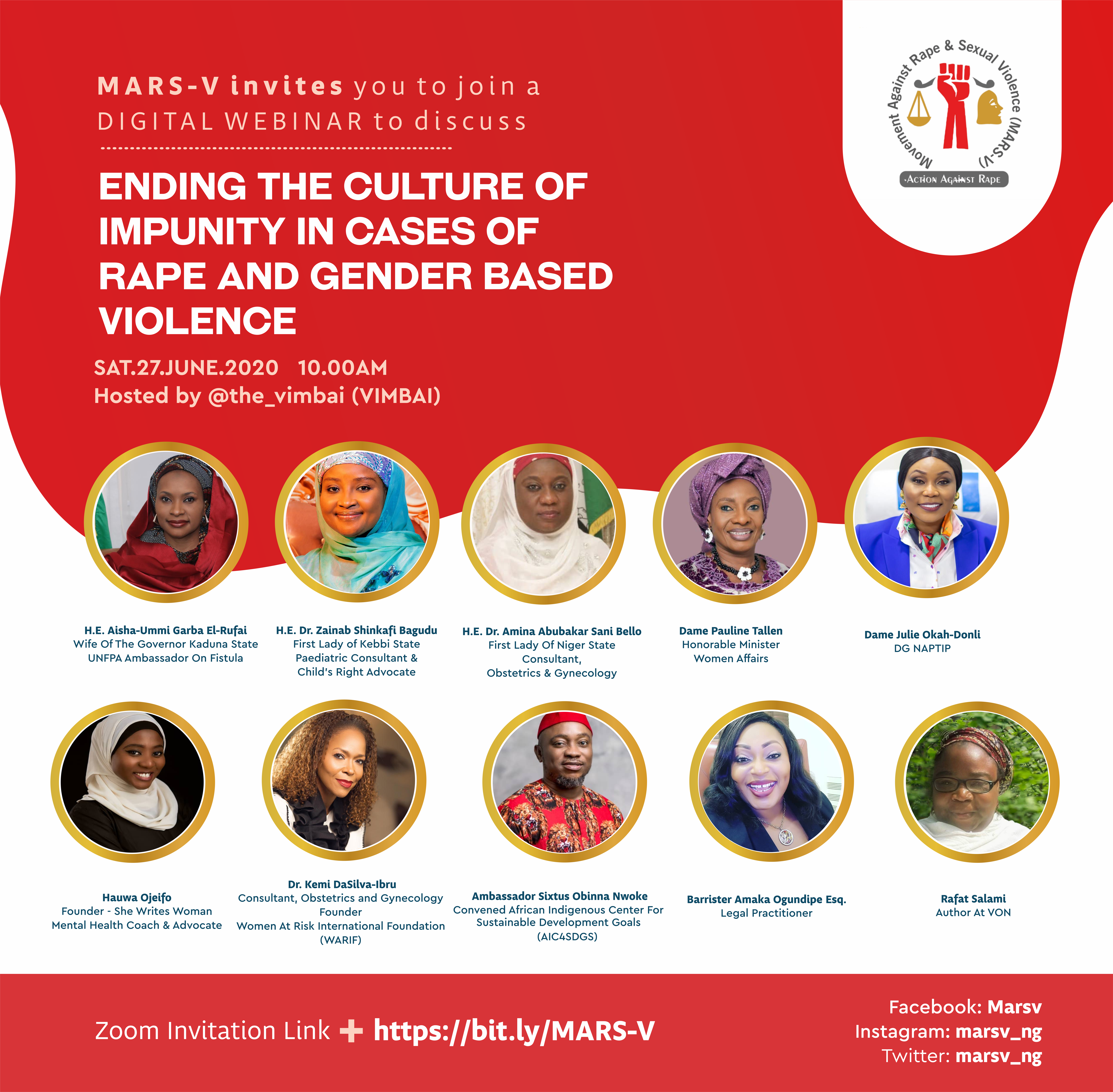 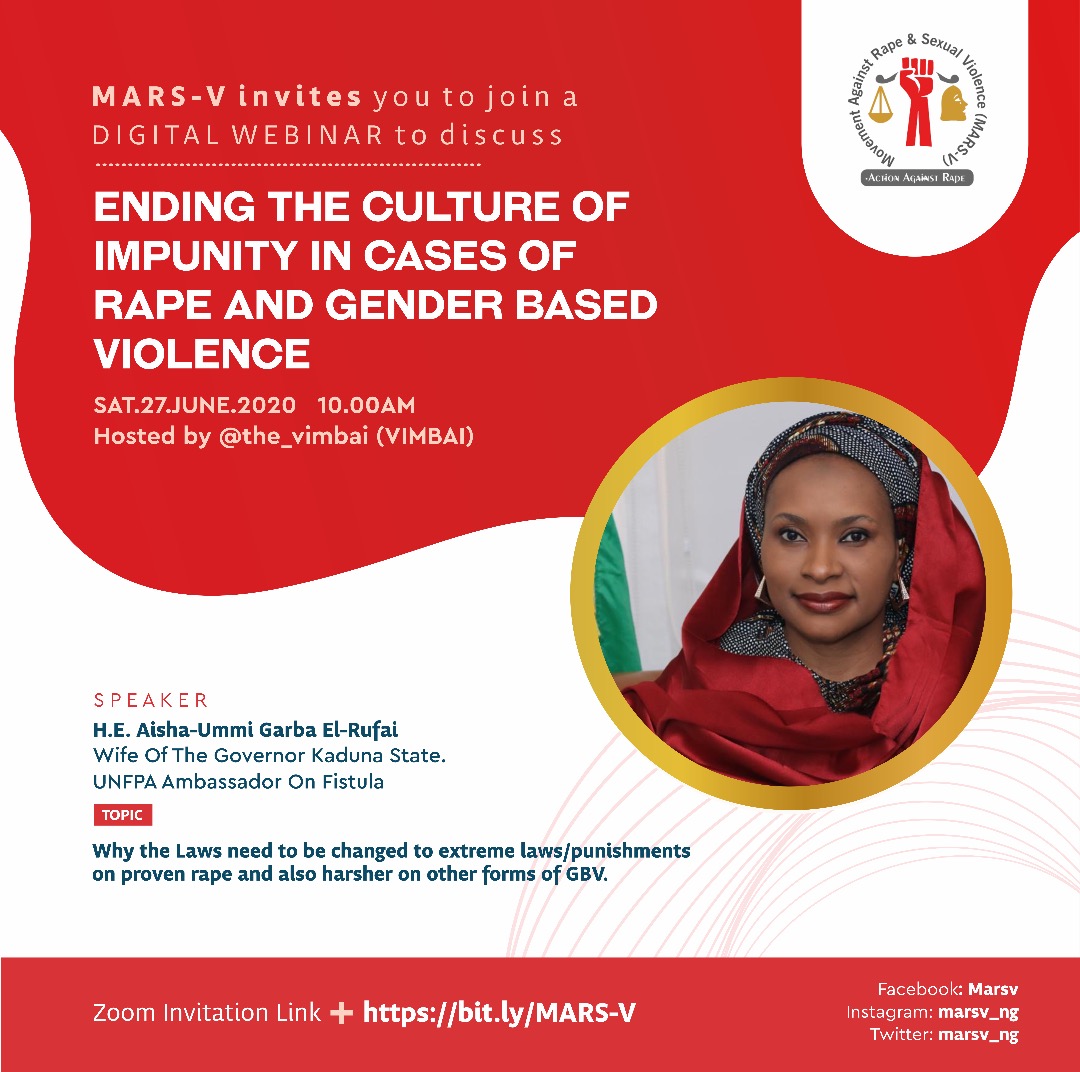 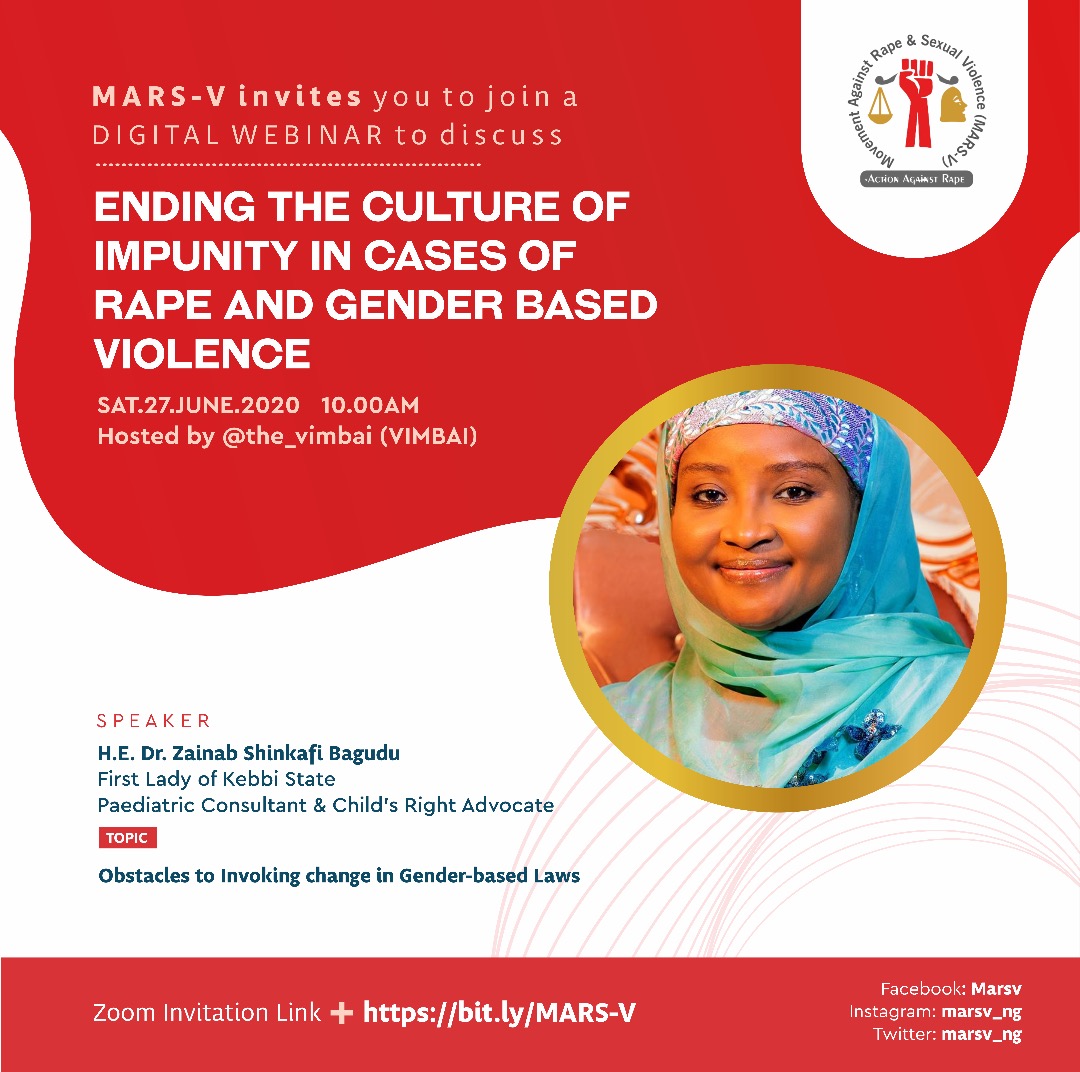 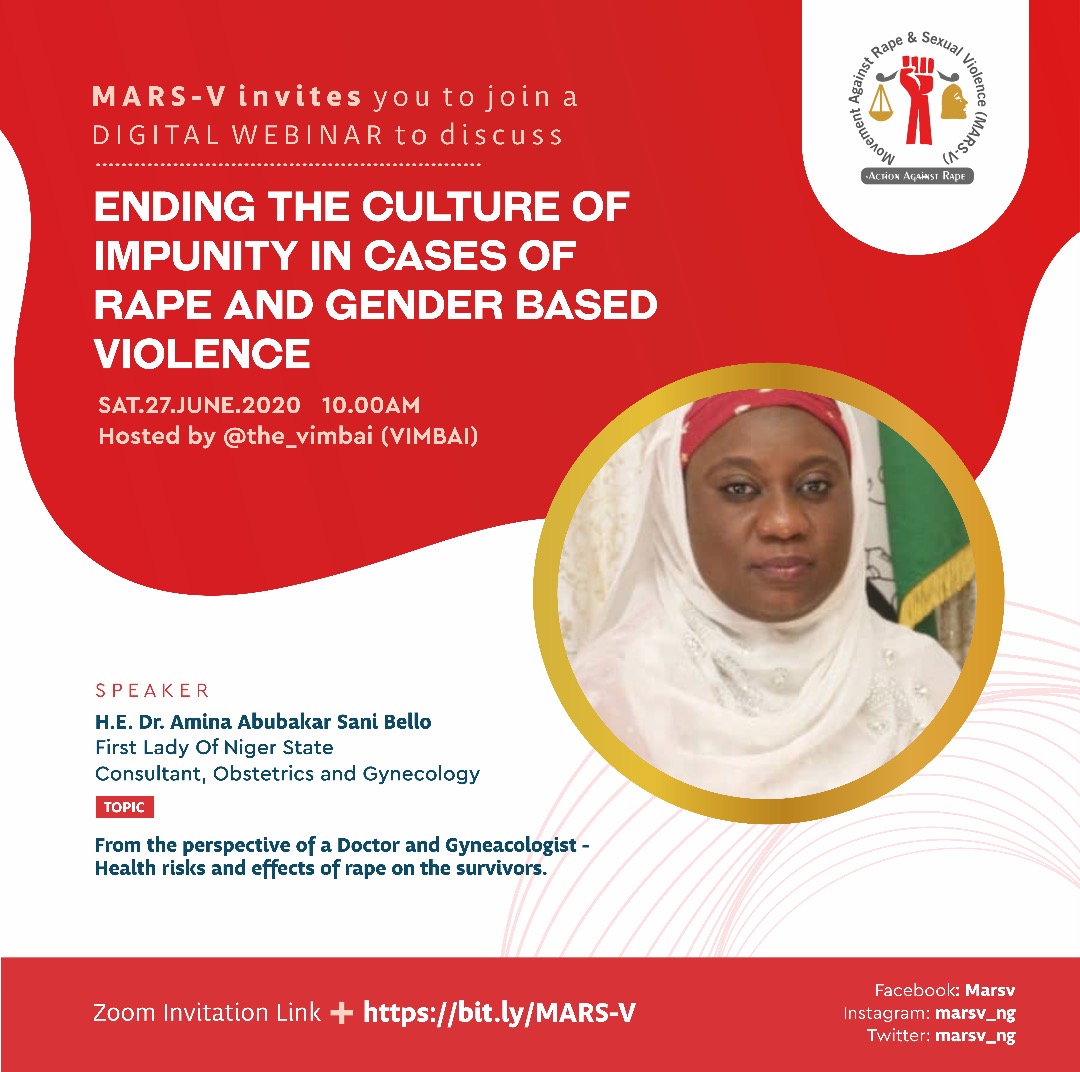 Summit to seek an end to the culture of impunity in cases of rape and gender-based violence
It is no news that there has been a huge increase in the number of rape cases and gender-based violence over the past few years; and if we want to see great change and improvement, we need to bring to fore, the areas where we can contribute in fighting these issues, while actively working closely with our lawmakers to create laws that ensure the severest of punishments for these crimes and also ensure justice, protection and stigma-free environments for survivors.

The Movement Against Rape and Sexual Violence (MARS-V) Initiative is set to host a digital summit on Saturday the 27th of June 2020, to address these issues; and educate the general public on the roles individuals and organizations can play in curbing this vile act and creating a safer environment for Nigerians.

The webinar which is titled “ENDING THE CULTURE OF IMPUNITY IN CASES OF RAPE AND GENDER-BASED VIOLENCE” will feature panellists from various fields who will be focusing on topics such as:

The Guest Speaker for this discussion is His Excellency, Nasir Ahmed El-Rufai, Governor of Kaduna State.

Speakers at the virtual summit will include:

“One of the purposes of punishment is to deter subsequent and intended perpetrators of such crimes for which the punishment is being meted out for and until we get the laws changed to apply extreme legal punishment for rape, Sexual predators and rape perpetrators will continue to destroy people’s lives without any serious consequences.” – H.E. Aisha-Ummi Garba El-Rufai

The conversation will be moderated by renowned TV host and producer, Vimbai Mutinhiri-Ekpeyong.

Nigeria
Badagry expressway gets N15bn NNPC tax credit boost
10 mins ago
The Agbara-Seme border section of Lagos-Badagry expressway project will receive N15 billion of NNPC tax credit fund, Federal Controller of Works in Lagos, Olukayode Popoola, has said.
Nigeria
No new COVID-19 death in Nigeria – NCDC
24 mins ago
Nigeria did not record a single COVID-19 death on Saturday.
Guardian Life
Love Your Partner In Their Love Language
45 mins ago
Being in love is a beautiful and an indescribable feeling. You meet someone for the first time and you desire to know more and spend quality time with the person; you learn the things the person loves, become friends with their friends and develop some changes in character. Most times, we ignore our wants and…
Nigeria
60% of Nigeria’s valuable forest lost, rest under threat
58 mins ago
The Conservator-General, National Park Service, Dr Ibrahim Goni, says 60 per cent of the country’s valuable forest estate has been lost to degradation and most of those left, are currently under threat.
Nigeria
Police arrest, investigate 2 brothers for alleged rape of minor in Enugu
1 hour ago
Police have arrested and are investigating case of two brothers, Chima Nnamani and Michael Nnamani, for allegedly involvement in serial raping of a nine-year-old minor within Enugu community.

AMA Press Releases
Madagascar: ‘World cannot look away’ as 1.3 million face severe hunger
19 Nov
The international community must step up support to Madagascar, where more than one million people in the south are facing severe hunger, the top UN aid official there said on Thursday in a renewed appeal for solidarity and funding.  NEW YORK, USA, November 19, 2021,-/African Media Agency (AMA)/-The impacts of the most acute drought in…

Guardian Woman
Bisola Adeyemi: Every school should have a sanitary pad bank
20 Nov
In 2014, people started celebrating Menstrual Hygiene Day to spread awareness about the importance of good menstrual hygiene. It is celebrated on May 28 and the date represents the standard menstrual
APO Press Releases
AMISOM Trains Jubaland Officials to Combat Conflict-related Sexual Violence
19 Nov
Download logoThe African Union Mission in Somalia (AMISOM), has concluded a five-day training workshop on the prevention and response to sexual and gender-based violence (SGBV) in Kismayo, the administrative capital of Jubaland State. The Training of Trainers course was attended by 25 (15 male and ten female) trainers on SGBV in Jubaland.  Gloria Jaase, the…

Nigeria
Senate panel laments state of women centre
20 Nov
The Senate has lamented over the dilapidated state of the National Centre for Women Development (NCWD) at the Central Business District, Abuja.