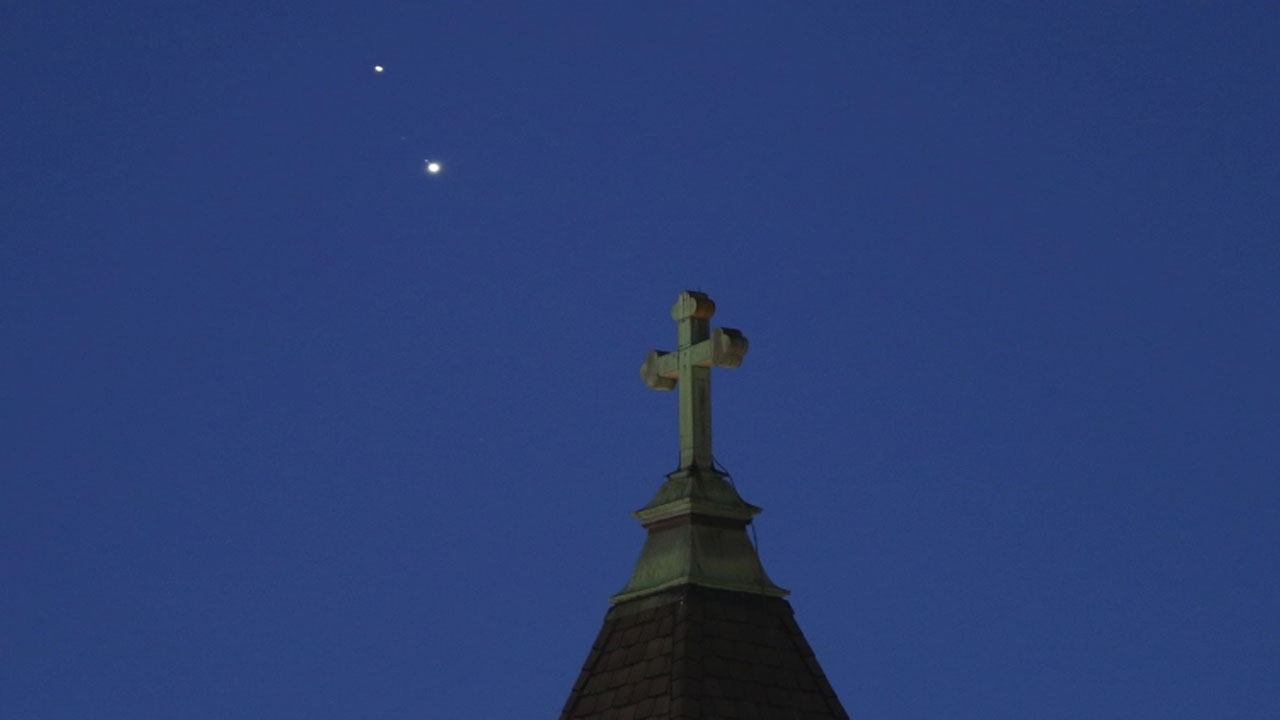 Saturn and Jupiter seen behind a church ahead of their conjunction that is being called The Christmas Star, on December 18, 2020 in Jersey City, US [Gary Hershorn/Getty Images] 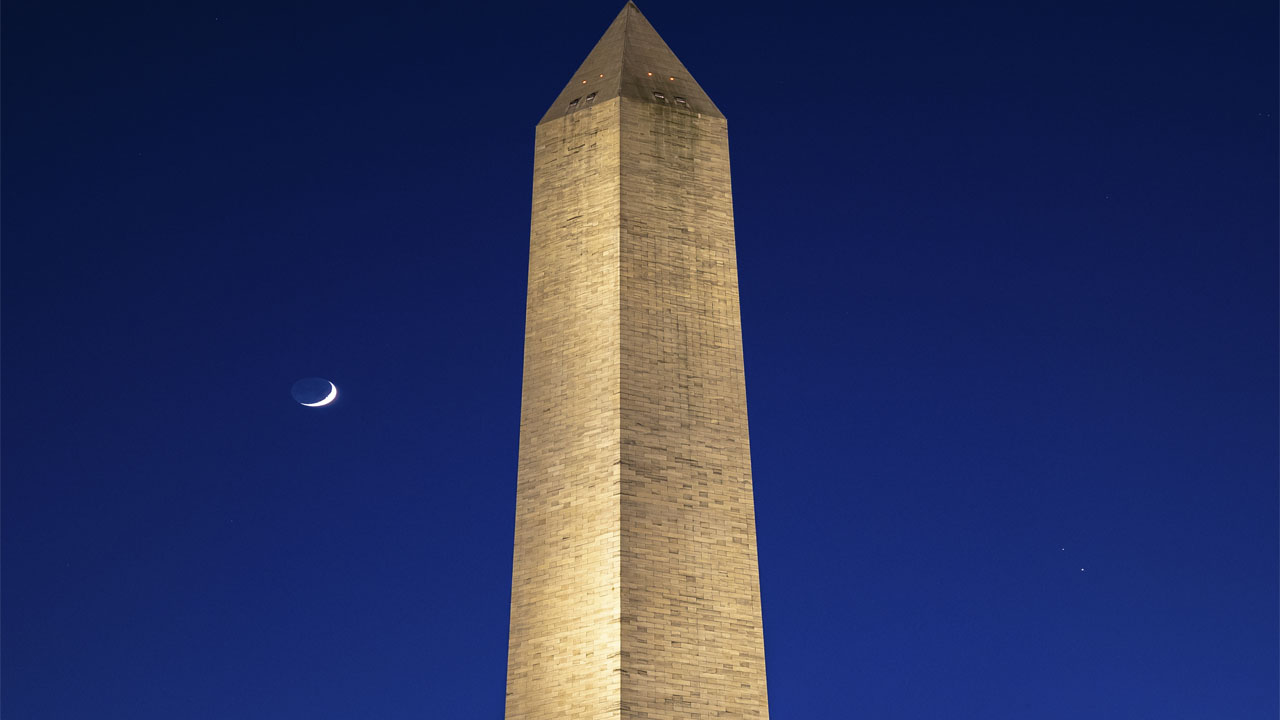 This NASA handout photo obtained December 20, 2020 shows the Moon(L), Saturn(upperR), and Jupiter(lowerR), as they are seen after sunset with the Washington Monument, on December 17, 2020, in Washington,DC. - The two planets are drawing closer to each other in the sky as they head towards a “great conjunction” on December 21,2020 where the two giant planets will appear a tenth of a degree apart. (Photo by Bill INGALLS / NASA / AFP) / RESTRICTED TO EDITORIAL USE - MANDATORY CREDIT "AFP PHOTO /NASA/BILL INGALLS/HANDOUT " - NO MARKETING - NO ADVERTISING CAMPAIGNS - DISTRIBUTED AS A SERVICE TO CLIENTS

The solar system’s two biggest planets, Jupiter and Saturn, are set to come within planetary kissing range in Monday’s evening sky, an intimacy that will not occur again until 2080.

This “great conjunction”, as it is known to astronomers, occurs fortuitously on the winter solstice for those in the Northern Hemisphere, and the beginning of summer in the global south.

The two planets will, in fact, be more than 730 million kilometres (400 million miles) apart.

But because of their alignment in relation to Earth, they will appear to be closer to each other than at any time in almost 400 years.

Optimal “conjunction” is set to take place at 1822 GMT.

Looking with a telescope or even a good pair of binoculars, the two gas giants will be separated by no more than a fifth of the diameter of a full moon.

With the naked eye, they will merge into a “highly luminous” double planet, said Florent Deleflie from the Paris Observatory.

The last time Jupiter and Saturn nuzzled up this close was in 1623, but weather conditions in regions where the reunion could be seen blocked the view.

Visibility was apparently better the time before that during the Middle Ages, on March 4, 1226 to be precise.

The best viewing conditions on Monday will be in clear skies and close to the Equator.

People in Western Europe and along a vast swathe of Africa will have to train their sight to the southwest.

“The Grand Conjunction refers to the period when two planets have relatively similar positions in relation to Earth,” said Deleflie.

Jupiter, which is the larger planet, takes 12 years to revolve around the sun, while Saturn takes 29 years.

Every 20 years or so, they appear to observers on Earth to come closer to each other.

“With a small instrument — even a small pair of binoculars — people can see Jupiter’s equatorial bands and its main satellites and Saturn’s rings,” Deleflie said.

Sport
D’Tigers beat Uganda to lead group in FIBA World Cup qualifiers
NOW
Nigeria’s D’Tigers on Sunday beat Uganda 95-69 to lead in the first round in Group A of the African Qualifiers for the 2023 FIBA Basketball World Cup.
Nigeria
Gunmen holed up in Jos correctional centre – official
3 mins ago
The Nigerian Correctional Service (NCoS) has said that the bandits that attacked the Jos Custodial centre were trapped as joint security operatives of the Operation Safe Haven surrounded the prison and its environs.
Nigeria
COVID-19: NCDC says it’s monitoring emerging evidence on Omicron variant
7 mins ago
The Nigeria Centre for Disease Control (NCDC), says it is monitoring emerging evidence on Omicron variant and its implication, to inform Nigeria’s response to the COVID-19 pandemic.
Nigeria
Omicron, return of travel bans dampen oil future, air travel
4 hours ago
With travel restrictions being reinstated against a number of countries in southern Africa by the United Kingdom, United States of America and Singapore, among others..
Nigeria
Don’t overburden us, Nigerians warn FG on fuel subsidy
4 hours ago
More reactions, yesterday, denounced the planned removal of petroleum subsidy and introduction of N5,000 transportation subsidy to 40 million Nigerians as announced by the Federal Government...

Science
‘Star of Bethlehem’ to grace the sky at Christmas
17 Dec 2020
The two largest planets in the solar system, Jupiter and Saturn, will appear closer to each other in the night sky during Christmas week than at any point in the past 800 years, astronomers say.

Other Sports
Tiger, Charlie Woods ready to compete at father-son PNC Championship
18 Dec 2020
After 24 years, the golf world will see a different side of Tiger Woods competing in this weekend’s PNC Championship in Orlando, Florida, reports usatoday.com.

Science
Jupiter and Saturn cheek-to-cheek in rare celestial dance
21 Dec 2020
The solar system's two biggest planets, Jupiter and Saturn, are set to come within planetary kissing range in Monday's evening sky, an intimacy that will not occur again until 2080.

Opinion
Why the good man suffers
28 Jan
The questioning rings out loud and clear; it is more than ever louder today in view of the difficult times and harrowing experiences mankind is passing through: Why do good people suffer...

World
Tiger Woods in surgery after roll-over car crash
24 Feb
Tiger Woods suffered serious injuries to both legs as his car flew off the road Tuesday near Los Angeles in a crash he was "very fortunate" to survive, law enforcement...

Sport
Why was Woods with Will Smith’s wife before car crash?
26 Feb
Golf legend Tiger Woods travelled alone when he lost control of his car on February 23, 2021. He is recovering after surgeries on his leg, foot, and ankle.