Despite decades of funding, literacy level in the northern states remains low

By Ajibola Amzat (Features Editor)
Share on Facebook Share on Twitter Share on WhatsApp Share on Telegram
According to the data, the states where majority of people can neither read nor write are those in the Northeast, Northwest, and North-central. The data shows that Yobe State has only 7.23 per cent literacy level, the lowest in the country.
1 of 10 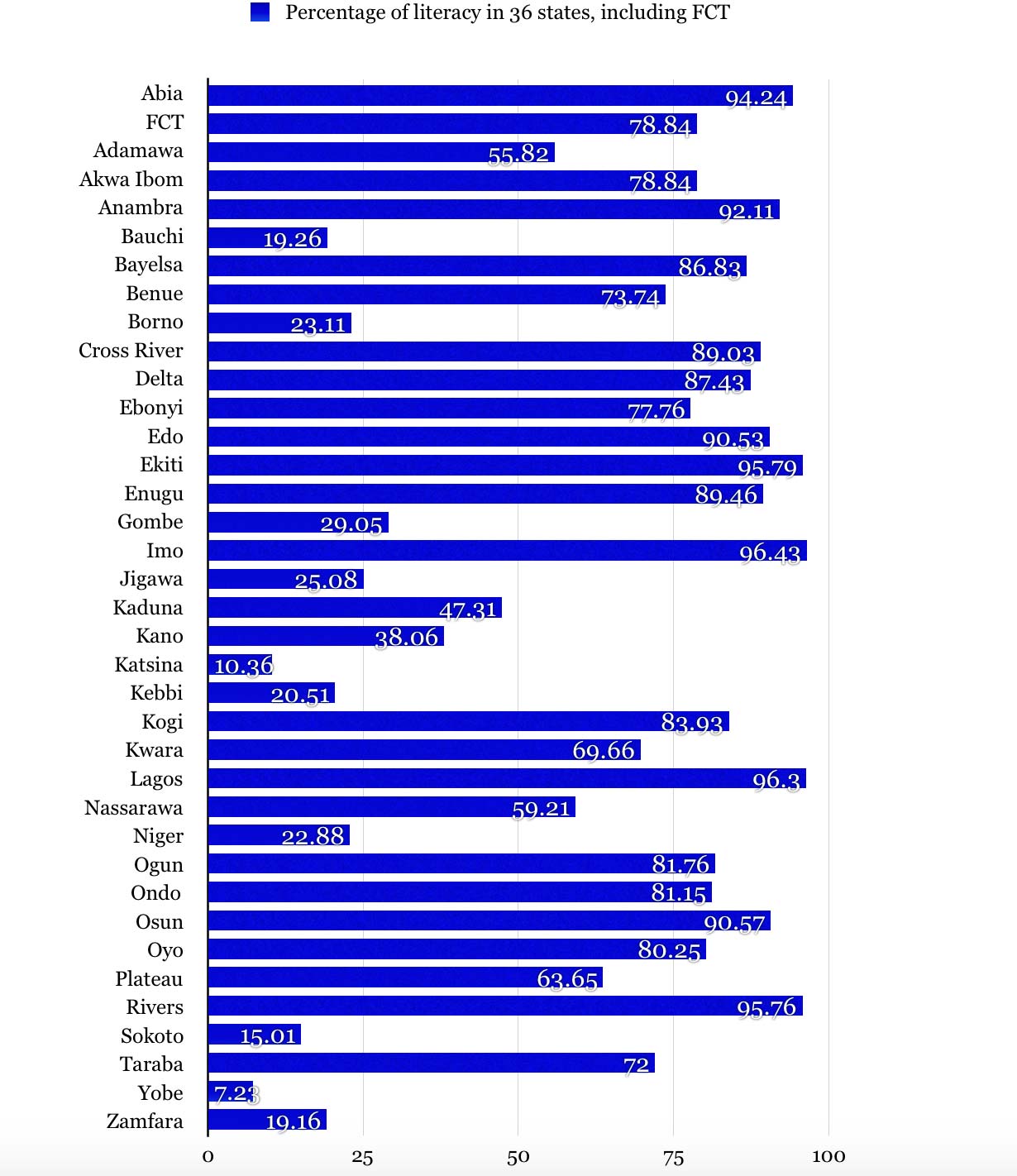 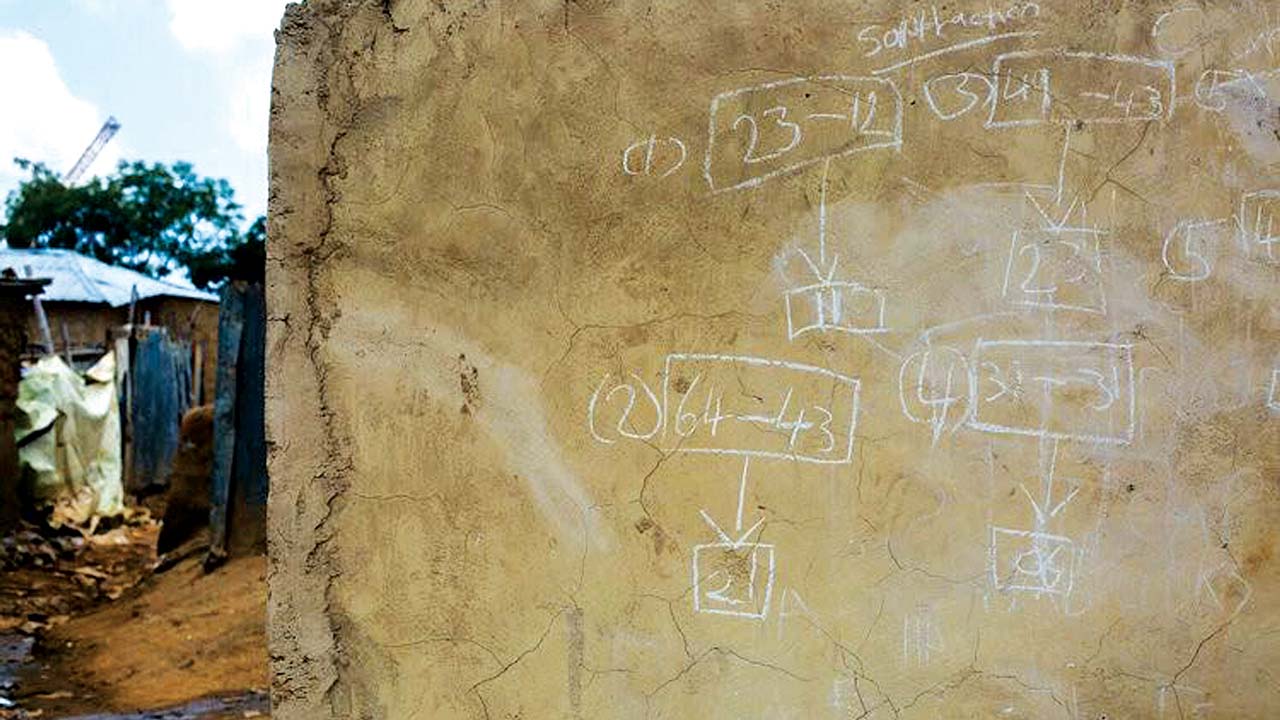 On the exterior of the Karmajiji camp, Maiduguri, Borno State there is mathematics being taught on the wall with chalk. PHOTO: Fati Abubakar (Bit of Borno)

States in the northern Nigeria, for many years, have lagged behind in education among the 36 states of the federation; but not for lack of funding. The data on literacy index recently published by the National Bureau of Statistics (NBS) revealed that the huge gap in the educational development between the southern and northern Nigeria is yet to close up, nearly sixty years after independence.

According to the data, the states where majority of people can neither read nor write are those in the Northeast, Northwest, and North-central. The data shows that Yobe State has only 7.23 per cent literacy level, the lowest in the country.

But while the education profile of the northern regions is low compared to other regions in the South, the states are not disadvantaged in terms of the monthly Federal Government statutory allocation.

In the last 10 years, successive northern governors have received over N12 trillion in federal allocation on behalf of the 19 states and its 413 local government areas excluding FCT, according to the data sourced from the office of the Accountant-General of the Federation.

The breakdown of the allocation from 2007 to 2016 reveals that states in the Northwest, North East and North Central have received a total of 3trillion, N2.5 trillion and N2.2 trillion respectively. And out of the over N10 trillion allocated to the 774 local government, northern states have received more than 50 per cent of the funding.

According to the 2014 population estimates, Imo population is estimated at 4.7 million while Yobe is estimated at 2.8 million people. In addition, the FG through the Universal Basic Education (UBE) Programme has disbursed over 153 billion to the 19 states in the North and N115billion to the 17 states in the South between 2005 and 2016. In the last 10 years, all the states in the North have accessed their UBE
intervention fund, except Adamawa, Plateau, Kogi and Niger that failed to apply for the funding only in 2015 and 2016.

Last year, most states did not access the fund, but Borno assessed its statutory N1.04billion, while Nasarawa only accessed N607.85 million.In spite of the funding and other intervention directed at developing education in the north, there are over nine million alimajiris, the itinerant Qur’anic school pupils who constitute the largest group of out-of-school children in Nigeria, the Ministerial Committee on Madrasah has disclosed.

The situation in the North presents even a gloomier picture, according to the former Minister of Finance, Dr. Usman Shamsudeen. Speaking to the World Bank Statistics at the Northern Nigeria Economic and Investment Summit in 2011, Dr. Shamsudeen, said the North has the highest number of out-of-school children, not only in Nigeria, but in the entire world.

That same year, girl-child school enrolment in the Northeast and Northwest were 20 per cent and 25 per cent respectively, while Southwest and Southeast
were 85 per cent, and Southsouth was 75 per cent, according to the Word Bank data.

Shamsudeen blamed the northern leaders for showing marginal commitment to developing education in the region, and urged them to improve the condition.Six years after his admonition, the literacy level in the North remains stunted as reflected in the latest NBS data. When he recently visited Kaduna National Library, the senator representing Kaduna Central, Sheu Sanni, also raised the issue of poor literacy in the region. He decried the fact that there is a relative lack of interest in education in the North compared to the South, and linked the problem to poor investment on education and insurgency, which has ravaged the Northeast in the last eight years.

“There is no doubt that insurgency in the north-eastern part of the country has seriously undermined the education progress of northern Nigeria. And the image of the North and northern people nationally and internationally is an image of people that are opposed or resistant to western education.”

But the Emir of Kano, Muhammadu Sanusi, who has been very vocal on the subject of underdevelopment, especially in the North, partly blamed the British colonialists for the dismal state of education in the region.

According to him, the low literacy level in the North is caused by the anti-North British colonial education policy in pre-independence Nigeria. The British deliberately discouraged people of the North from having interest in education, the monarch said at an education conference in Kaduna.

“The purpose of the British administration in Northern Nigeria is not to promote education and material development.” But the emir’s explanation is flawed by the fact that there is no significant rise in literacy level in the region despite the exit of the colonial masters nearly sixty years ago.

Notwithstanding, Emir Sanusi also took a swipe at the conservative northern leaders who discourage attitudes and activities that would have developed the region.

It was a viewpoint expressed in good faith. But it was a statement that did not sit well with the northern establishment, and prompted the call for probe of Sanusi over his utilization of billions of the Kano emirate Council.

A recent UNESCO report shows that many schools in the North lack adequate classroom space, furniture and equipment, and are often too remotely located. Water, health and sanitation facilities are usually inadequate while pupil-teacher ratios remain low.

The international organisation has also linked early marriage to low levels of education, high levels of violence and abuse, social isolation and severe health risks. Early marriage and teenage pregnancy prevent girls from going to school, and a lot of girls drop out of school before reaching primary class six, the report stated.

Meanwhile, Kaduna state government has seized the opportunity of better performance of its students in the 2016 WAEC examination to remove itself from the league of low literacy states.On Twitter, the government said on Friday that the state is investing more in education, and getting better result than any other state in the region.

According to the state Commissioner for Education, Science and Technology, Andrew Jonathan Nok, Kaduna has paid over N140 million for the purchase of WAEC form, improve educational infrastructure and re-trained teachers.

“Last year, Kaduna came 1st in the North and 4th in the whole country in both WAEC and NECO. We are working towards being 1st in Nigeria,” Nok said.
But The Guardian has found the claim by the commissioner to be inaccurate.

The 2016 state-by-state WAEC results shows Abia State to come first; Anambra second, Edo third and Rivers fourth. Kaduna instead placed 12th position. In fact, none of the state in the North features among the first 10.

As a way of addressing the adverse effect of poor education, the Global Partnership for Education last year announced a grant $100 million for five states in the North. The list includes Kaduna, Kano, Katsina, Jigawa and Sokoto states. The Government of Norway has donated $11.5 million, (approximately 3.6billion Naira) to improve basic education and support girls and women who have been victims of sexual violence by Boko Haram in the conflict-affected northeast Nigerian states of Borno, Yobe, Adamawa and Gombe.

Also, the US government in March has announced a new grant of $117 million to be shared between Bauchi and Sokoto for a period of five years.The NBS data shows poor human development in the North, but the northern leaders would find it hard to justify the failure on lack funding.

World
'Armed men kidnap' 3 Italians and a Togolese in Mali
1 hour ago
Armed men have kidnapped an Italian couple and their child as well as a Togolese national in southeastern Mali, a local official and a Malian security source told AFP Friday.
Nigeria
Buhari joins prayers for late UAE President
2 hours ago
President Muhammadu Buhari on Friday in Abu Dhabi, United Arab Emirates (UAE), joined the Muslim faithful to observe Jummah prayers, at which prayers were said for the repose of the soul of the late President of UAE, Sheikh Khalifa bin Zayed Al Nahyan.
Sport
2022 Okpekpe race will be the biggest ever – Pamodzi
3 hours ago
With seven days to go to the eighth edition of the World Athletics Elite Label Okpekpe international 10km road race, Pamodzi Sports Marketing, organisers of the historic race says this year's edition will be the biggest ever in terms of its organisation and quality of its elite cast. Race director, Zack Amodu says arrangements have…
Nigeria
My presidential ambition is to change the lives of Nigerians - Senate President
4 hours ago
President of the Senate Ahmad Lawal says his 2023 presidential ambition was conceived to enable him change the lives of Nigerians for the better.
Nigeria
Danish man gets death sentence for killing Nigerian wife, child
5 hours ago
A Lagos High Court on Friday sentenced a Dane, Peter Nielsen, to death by hanging for killing his Nigerian wife and daughter. Justice Bolanle Okikiolu-Ighile convicted Nielsen, 54, on two counts of murder brought against him by the Lagos State Government. The judge sentenced Nielsen to death by hanging on both counts. The Dane was…

Nigeria
Insecurity: Citizens blast FG over Nigeria safer than 2015 comment
16 Dec
Citizens reacted yesterday, to the Federal Government’s claim that Nigeria is safer today than in 2015.

Sunday Magazine
The reality of Jesus Christ in this season of Christmas - Part 1
19 Dec
In this Christmas season, we must reflect on what Jesus means to us and what difference He can make in us now, as a people going through sufferings, fear and anxiety caused by insecurity.

Nigeria
Killings: ACF unhappy with Buhari, Northern Governors
20 Dec
The Arewa Consultative Forum (ACF), has expressed concern over the alleged lack of empathy by Northern Governors to communities being attacked and killed by bandits and other criminals in the region.

Law
Review of problems with enforcing international arbitral awards in Nigeria - Part 1
21 Dec
Arbitration is the most common and most preferred means of resolving international commercial disputes. The benefits of arbitration include relative speed, privacy, and party autonomy in selection of their umpire.