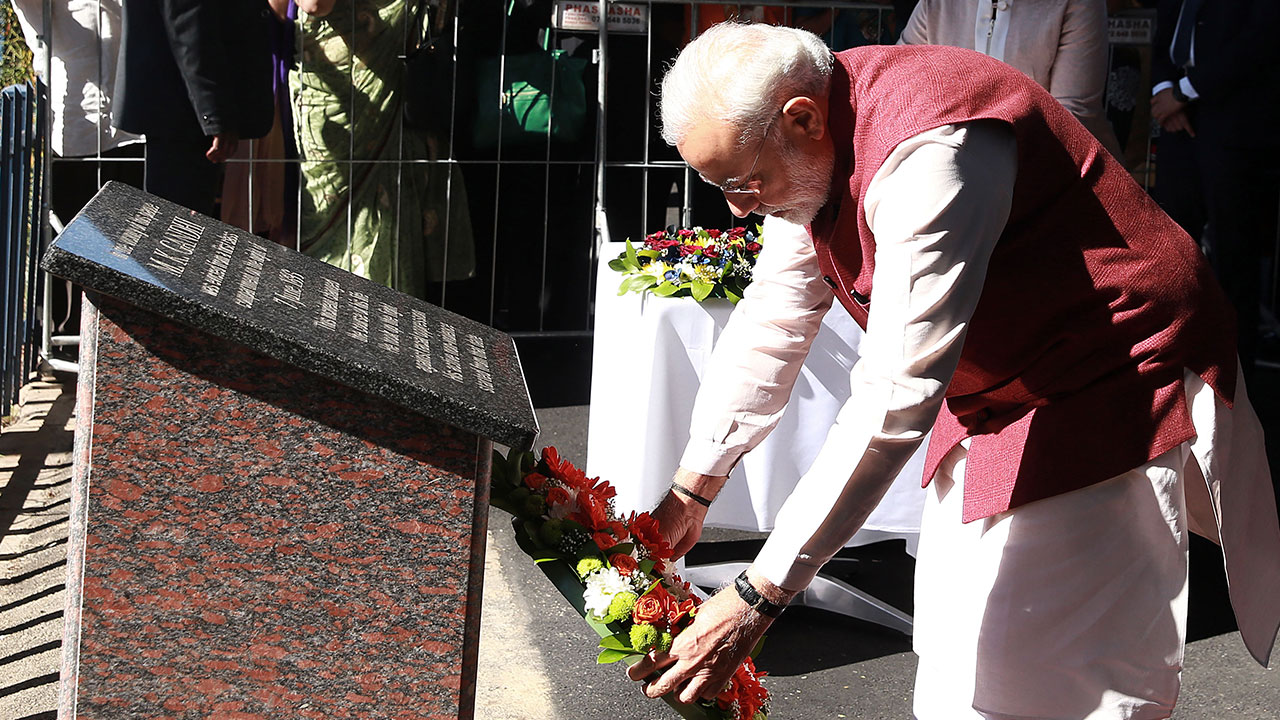 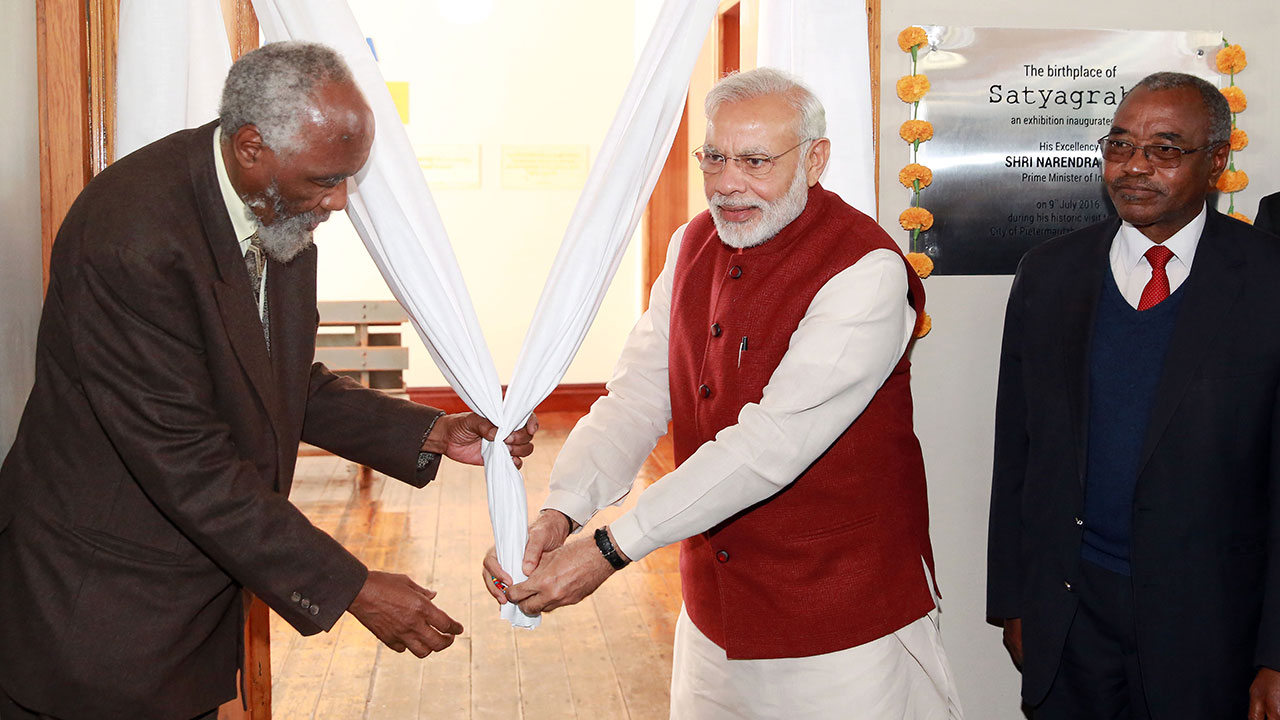 Indian Prime Minister Narendra Modi (C) opens an exhibiton at the Pietermaritzburg railway station some 90 kilometres north of Durban on July 9,2016. Indian Prime Minister Narendra Modi wraps up his South Africa tour with a visit to the former home of rights stalwart Mahatma Gandhi in the eastern port city of Durban before flying out to Tanzania. RAJESH JANTILAL / AFP

Modi is on the second leg of a five-day African trip which began in Mozambique and will also take him to Tanzania and Kenya — an itinerary designed to underline India’s growing engagement with the continent.

After talks with President Jacob Zuma in Pretoria on Friday, Modi travelled to the eastern province of KwaZulu-Natal, home to most of South Africa’s 1.3 million people of Indian origin — the largest diaspora population in Africa.

Modi took a short, symbolic train ride to the provincial capital, Pietermaritzburg, where Gandhi was ejected at the station in 1893 after refusing to leave the first class compartment because of his race.

Then a 24-year-old lawyer who had recently arrived in South Africa, Gandhi spent the night in the station and the insult was seen as formative in his fight against racial oppression during two decades in South Africa and later in British-ruled India.

“It was in South Africa that Mahatma Gandhi conceptualised his politics,” Modi told a thousands-strong diaspora gathering at a stadium in Johannesburg on Friday evening.

“This is the birthplace of Satyagraha (the policy of non-violent struggle).”

After the train trip, Modi travelled to the coastal city of Durban, the heart of the Indian community, where he visited the Phoenix settlement founded by Gandhi in 1904 as a community based on self-reliance.

Modi’s African visit is seen as part of India’s attempt to build ties with African nations as it vies for a greater share of the continent’s natural resources.

Across Africa, India’s economic footprint is dwarfed by that of its regional rival China, whose trade with the continent topped $200 billion last year.

In a speech to business leaders in Pretoria, Modi said that Indians “always believe in nurturing and nourishing and not in exploiting” its partners.

Diplomatic relations have recently been strained by alleged racism, with African ambassadors claiming after the murder of a Congolese teacher in New Delhi that Africans in India live in a “pervading climate of fear”.

World
Three dead after 'strong explosions' in Russia's Belgorod, near Ukraine
3 mins ago
At least three people were killed and four injured in a series of "strong explosions" that rocked the city of Belgorod early on Sunday, according to the governor of the region, which borders Ukraine.
Nigeria
PDP faults planned BRT fare hike in Lagos, wants reversal
12 mins ago
The Peoples Democratic Party (PDP) in Lagos State has faulted the proposed increase in the fare for Bus Rapid Transit (BRT) across various routes in the state, urging the reversal of the plan.
Nigeria
Kano Fire Service saves 135 lives, N34.6m property
26 mins ago
The Kano State Fire Service says it saved 135 lives and property worth N34.6 million from 42 fire incidents in June.
World
West African bloc assesses sanctions for coup-hit states
31 mins ago
West African leaders meet on Sunday in Ghana's capital Accra to review sanctions they have imposed on three military-ruled countries in their volatile region.
Nigeria
Accident: Ogun agency begins fixing of potholes
1 hour ago
The Ogun Traffic Compliance and Enforcement Corps (TRACE) says it has commenced the filling of potholes in Sango-Ota and its environs to prevent road accidents in the area.

Politics
After APC’s eight disastrous years, power should move to the South, says Dele Momodu
15 Apr
Nigeria deserves fresh people, ideas in Presidency Prolific writer, publisher and presidential aspirant of the Peoples Democratic Party (PDP) Chief Dele Momodu in an exclusive interview with MUYIWA ADEYEMI, spoke on how PDP can win 2023 general elections, denies being a front for anybody. Going through your articles and writings, you have criticised many people…

World
India PM to hold first Kashmir public event since clampdown
22 Apr
India's prime minister will on Sunday hold his first public event in the disputed territory of Jammu and Kashmir since New Delhi imposed a sweeping security clampdown there more than two years ago.

World
Ukraine on agenda as Indian PM Modi heads to Europe
2 May
Indian Prime Minister Narendra Modi headed to Europe on Monday with New Delhi's refusal to condemn Russia's invasion of Ukraine set to be a key talking point in meetings with regional leaders.