US election 2016: Images from polling stations 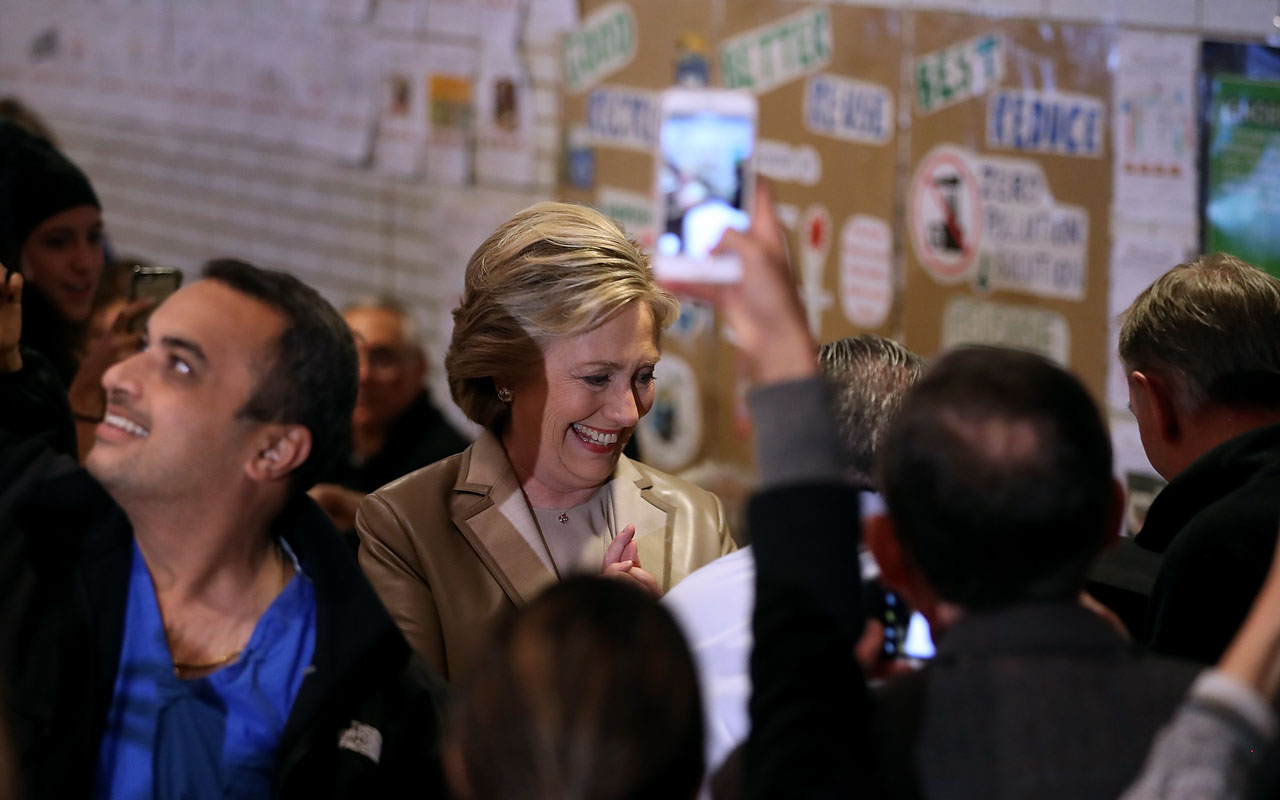 A crowd of people surround Democratic presidential nominee former Secretary of State Hillary Clinton as she votes at Douglas Grafflin Elementary School on November 8, 2016 in Chappaqua, New York. Hillary Clinton cast her ballot in the presidential election as the rest of America goes to the polls to decide between her and Republican presidential candidate Donald Trump. Justin Sullivan/Getty Images/AFP 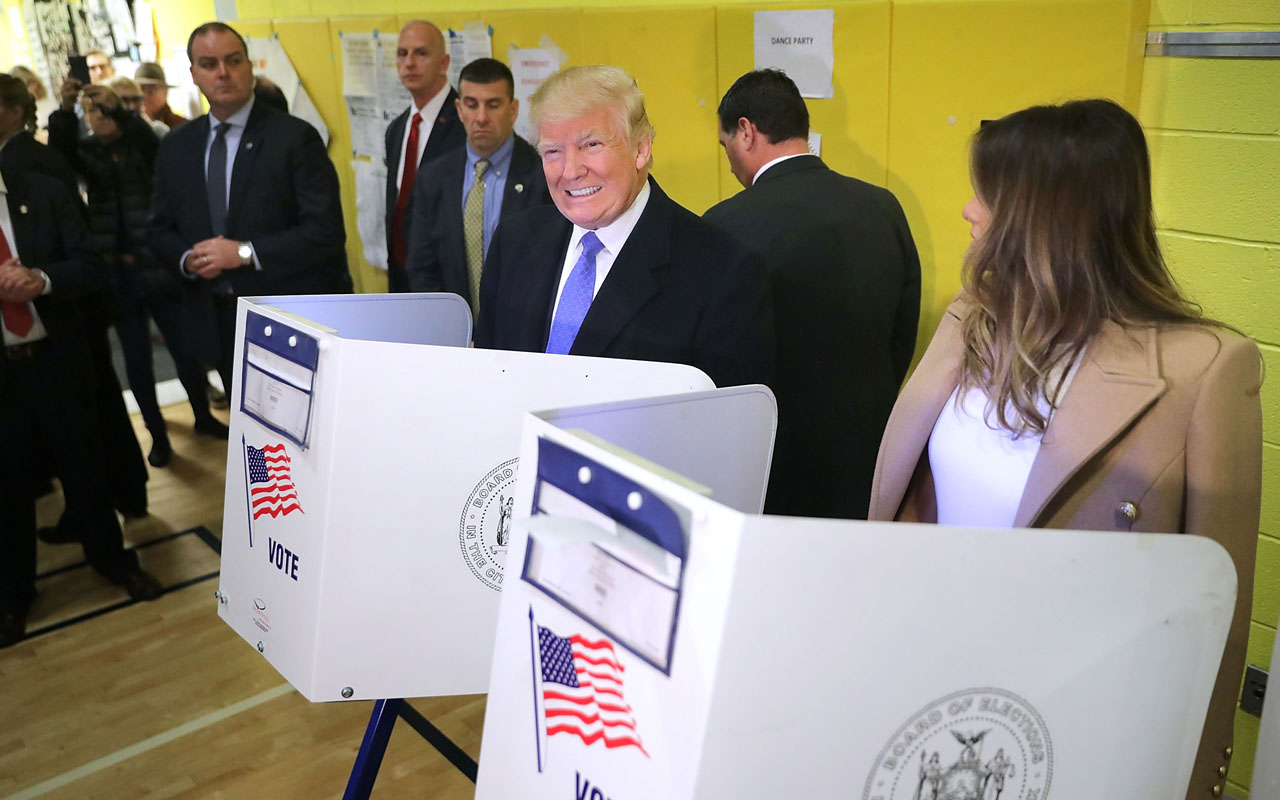 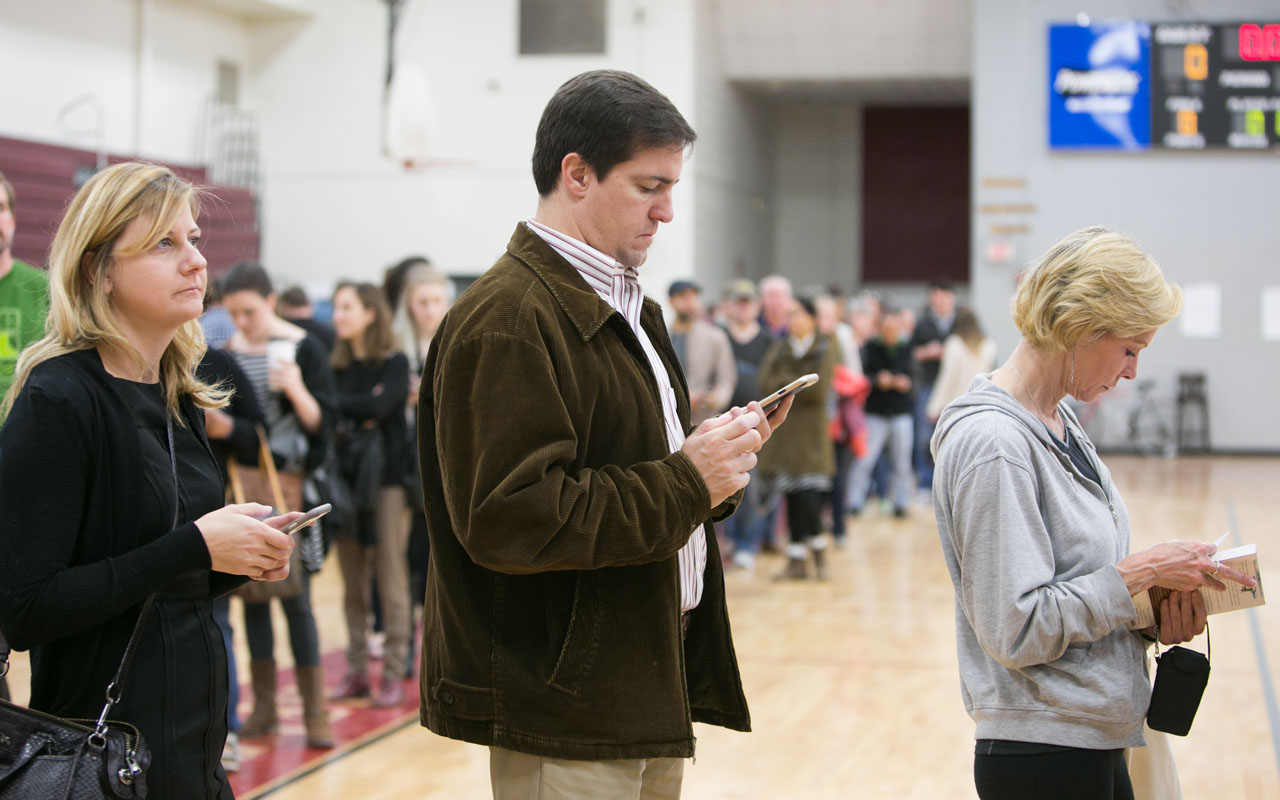 ATLANTA, GA - NOVEMBER 08: Early morning voters including (left to right) Ali Gross, Esteban Simian and Cheryl Gratton wait for 1.5 hours to cast their ballot on election day November 8, 2016 at Grady High School in Atlanta, Georgia. After a contentious campaign season, Americans go to the polls today to choose the next president of the United States. Jessica McGowan/Getty Images/AFP 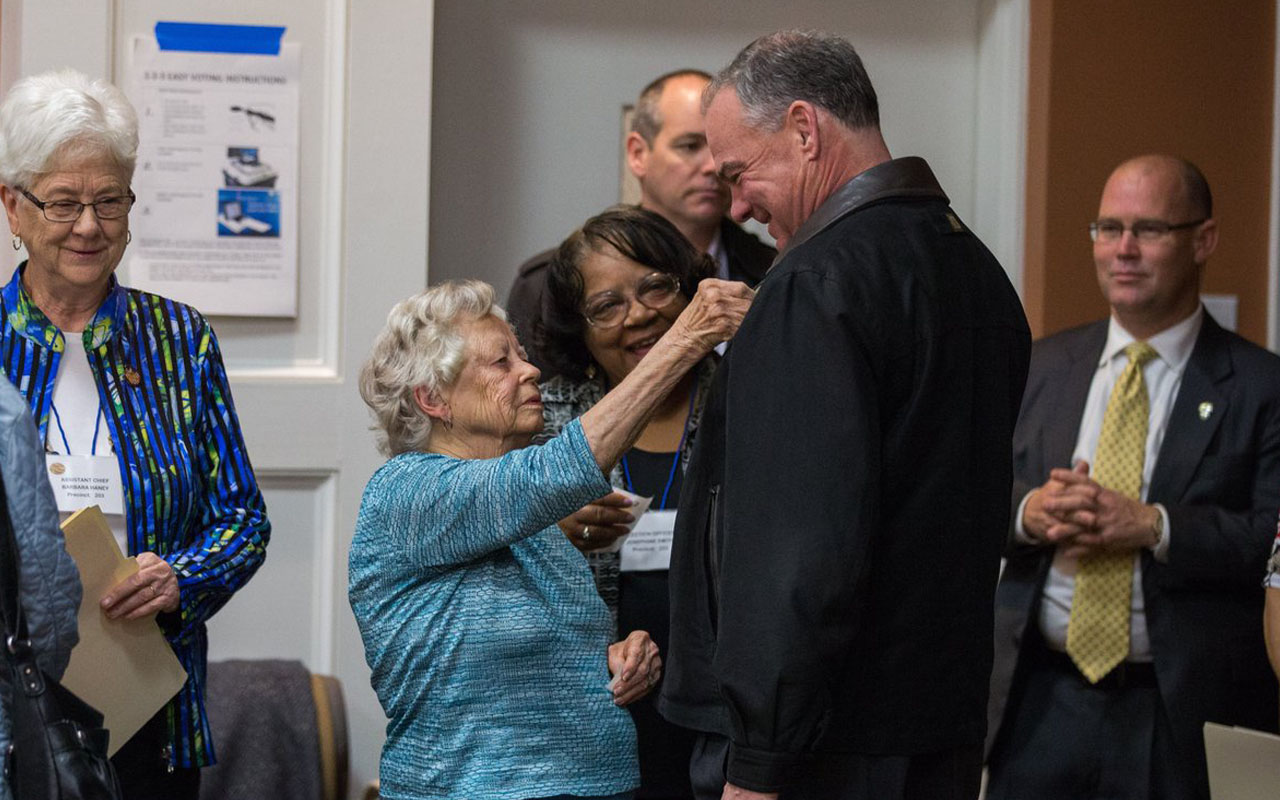 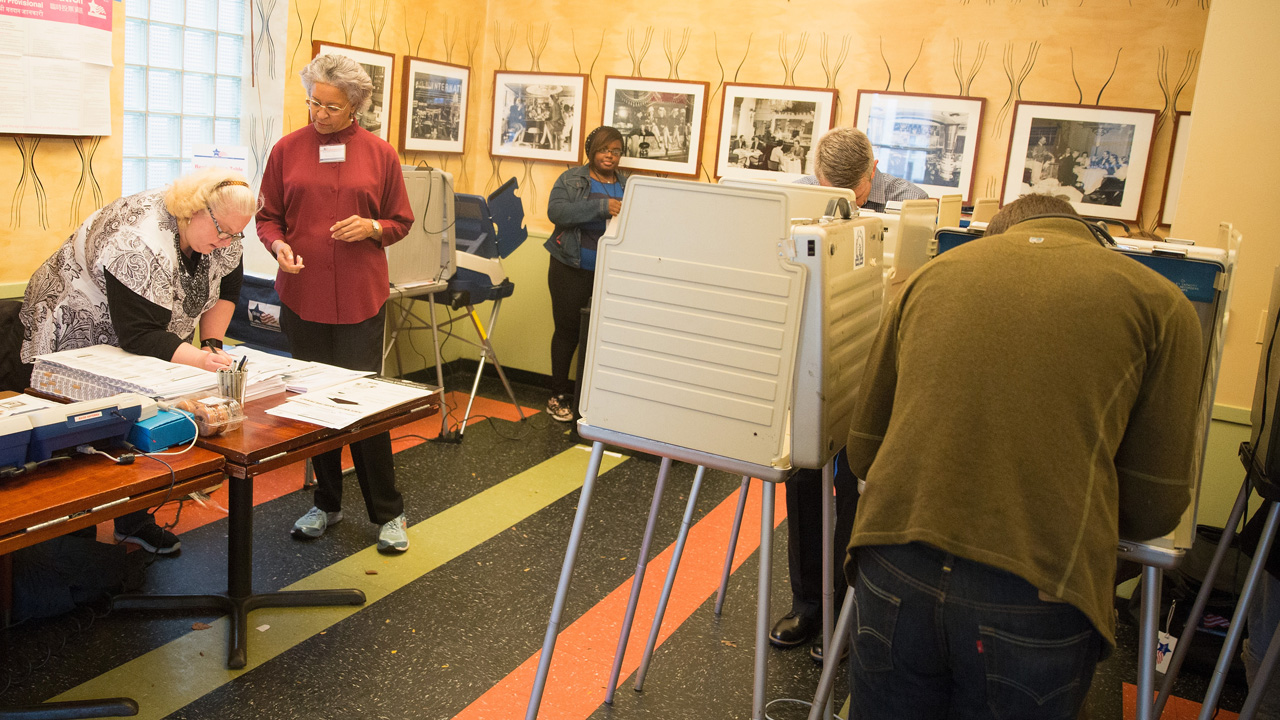 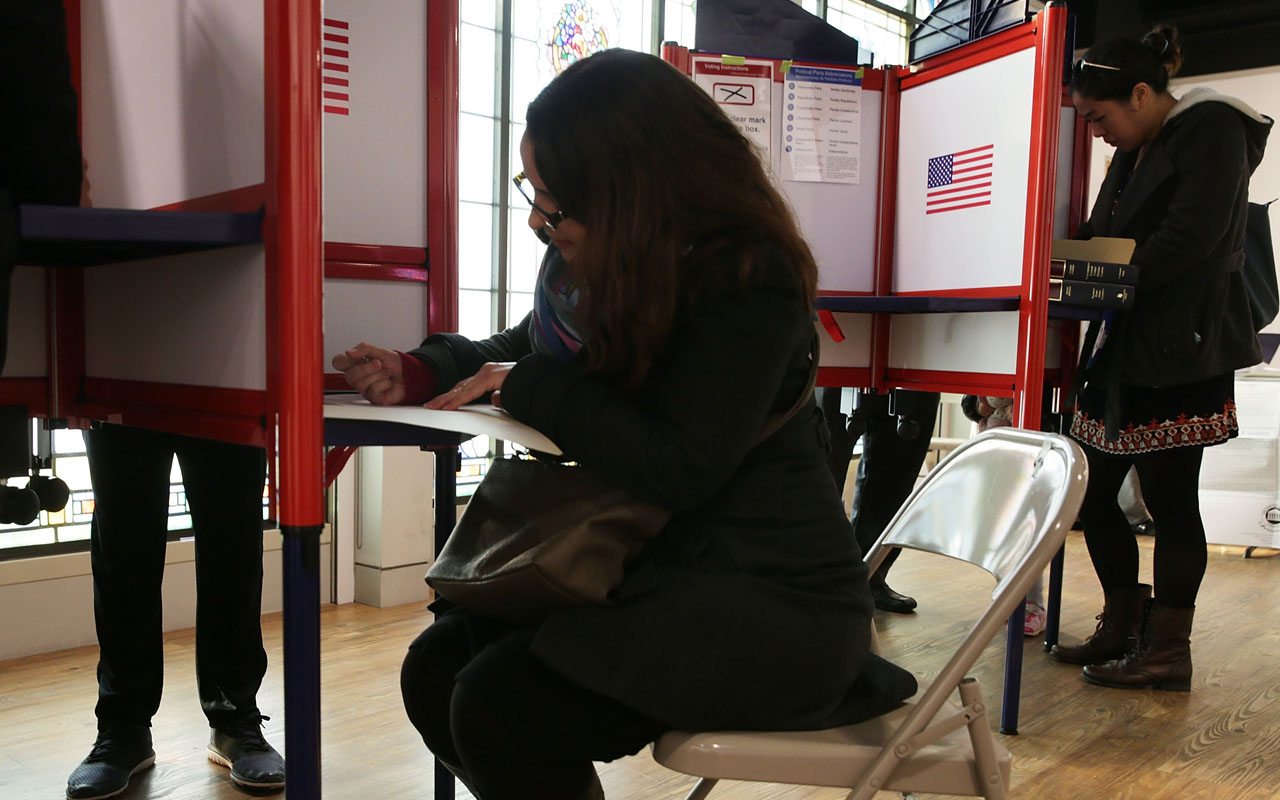 ARLINGTON, VA - NOVEMBER 08: Voters fill out their paper ballots in a polling place on election day November 8, 2016 in Arlington, Virginia. Americans across the nation make their choice for the next president of the United States today. Alex Wong/Getty Images/AFP 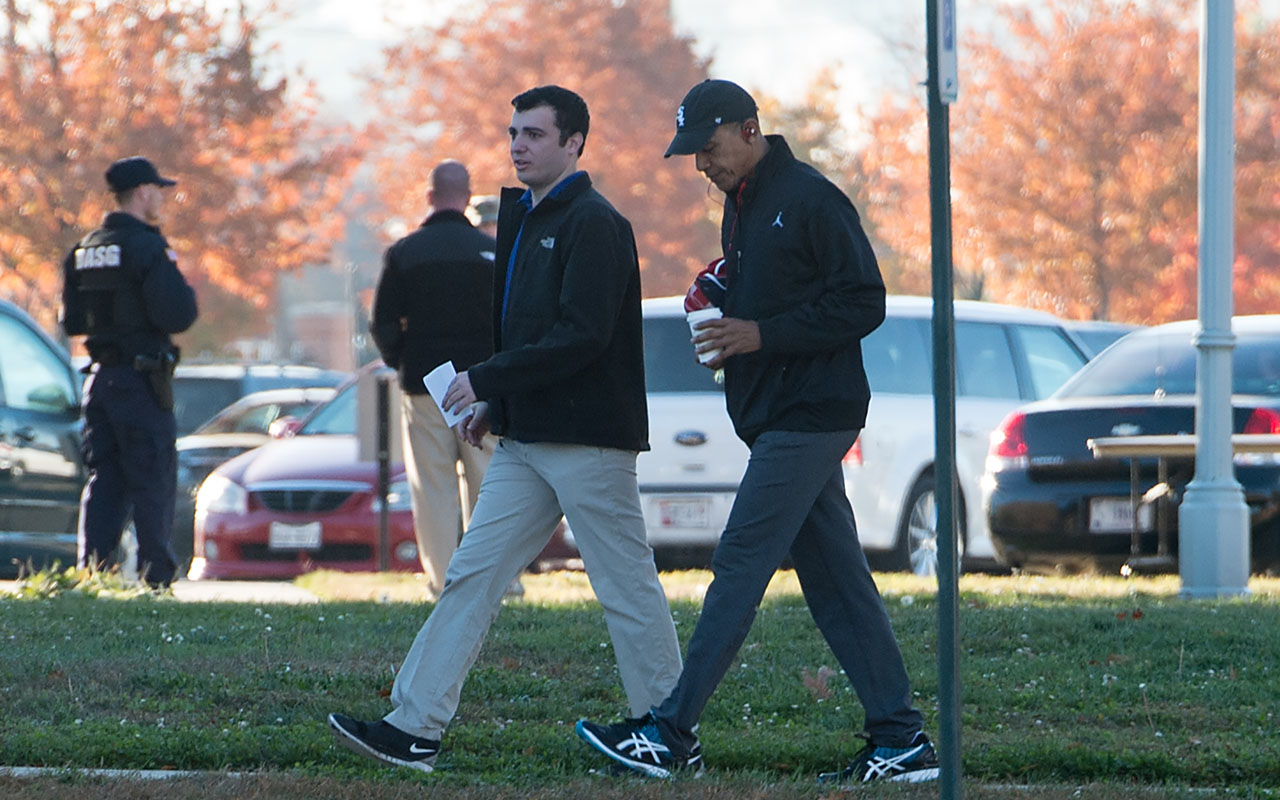 US President Barack Obama walks with a staff member as he arrives at Fort McNair in Washington, DC, to play basketball with friends on November 8, 2016. After an exhausting, wild, bitter, and sometimes sordid campaign, Americans finally began voting Tuesday for a new president: either the billionaire populist Donald Trump or Hillary Clinton, seeking to become the first woman to win the White House. / AFP PHOTO / NICHOLAS KAMM

Eager voters crowded into polling stations to choose a new US president Tuesday after a wild and bitter contest between the billionaire populist Donald Trump and Hillary Clinton, the Democrat seeking to become the first woman to win the White House.

Though the tone of the campaign leading to the election day was rather caustic, the election has been very orderly across America, according to media reports.

Check out the gallery above for images  from some polling centres across the US.

Nigeria
State of the nation: We are fed up, Nigerians tell government
1 hour ago
Nigerians from across the country are lamenting the hardships in the land, crying out for urgent measures by the government at all levels to mitigate their suffering which they said was becoming intolerable
Nigeria
Homosexuality: Bauchi Shari’ah Court sentences three to death by stoning
1 hour ago
A Sharia Court in Ningi Local Government Area (LGA) of Bauchi State has sentenced three men to death by stoning over homosexuality...
Personality
‘Nigeria is way back in development when it comes to women in leadership’
1 hour ago
Añuli Aniebo Ola-Olaniyi is the Executive Director of HEIR Women Development, a social enterprise born out of the need to see more girls and young women take up leadership positions...
Music
Ugoccie: I Want To Be Among People Holding It Down For Indigenous Music
2 hours ago
With ambiguous laws surrounding its legality, as well as weak law enforcement, Nigeria’s commercial sex industry continues to thrive in plain sight. It is even scarier when one realises
Sport
D’Tigers defeated in World Cup qualifiers
2 hours ago
Nigeria's men's national basketball team, D’Tigers, yesterday went down 70 -79 points to Cape Verde at the ongoing FIBA World Cup qualifiers in Kigali, Rwanda.

World
Biden says a Trump candidacy would motivate second term run
23 Dec 2021
Though he isn't even a year into his first term, US President Joe Biden says one factor could help convince him to run again in 2024: a rematch against 2020 rival Donald Trump.

World
Trumpism without Trump: the Republican playbook for 2022?
27 Dec 2021
As US Republicans cheered impressive gains in state elections in the fall, their leader may not have been so delighted

World
20 years on, dreams of euro rivalling dollar persist
28 Dec 2021
When 12 countries adopted the euro two decades ago, French president Jacques Chirac hailed a Europe that was "affirming its identity and its power".