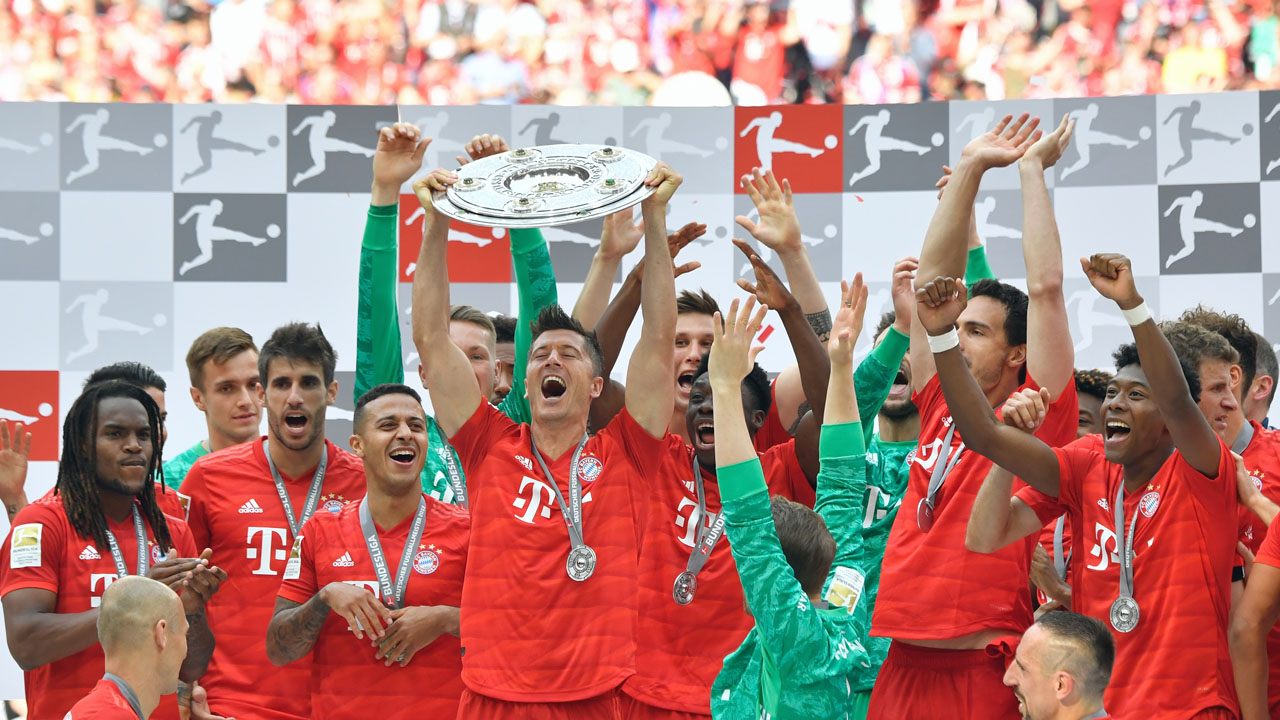 (FILES) In this file photo taken on May 18, 2019 Bayern Munich's Polish forward Robert Lewandowski and his teammates celebrate with the trophy after the German First division Bundesliga football match FC Bayern Munich v Eintracht Frankfurt in Munich, southern Germany. - Bayern Munich were crowned German Bundesliga champions for the eight year in a row on June 16, 2020 after their away win against Bremen. (Photo by John MACDOUGALL / AFP) 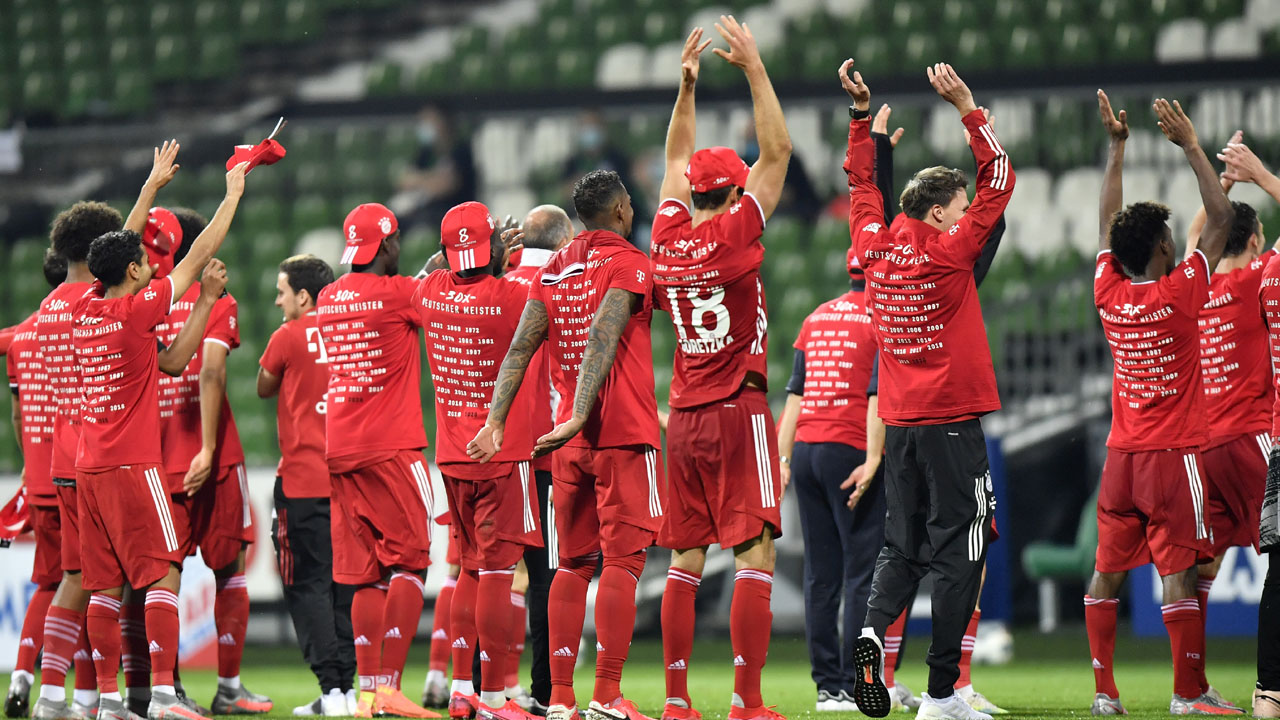 Bayern's players celebrate after the German first division Bundesliga football match SV Werder Bremen v FC Bayern Munich on June 16, 2020 in Bremen, northern Germany. - Bayern Munich were crowned German Bundesliga champions for the eight year in a row on June 16, 2020 after their away win against Bremen. (Photo by Martin MEISSNER / POOL / AFP) / DFL REGULATIONS PROHIBIT ANY USE OF PHOTOGRAPHS AS IMAGE SEQUENCES AND/OR QUASI-VIDEO
Robert Lewandowski said Bayern Munich had proved they are the best club in Germany after securing their eighth straight Bundesliga title on Tuesday as the Poland striker’s first-half volley saw them claim a 1-0 win at Werder Bremen.

Bayern was confirmed German champions for the 30th time in the club’s proud history to maintain their iron-grip on the Bundesliga shield in recent years.

“We have shown that we are the best team in Germany,” said Lewandowski.

Lewandowski struck two minutes before the break with a brilliant chest and low strike, but Bayern had to endure a nervy final 11 minutes after teenage left-back Alphonso Davies was sent off for a second yellow card.

At the end of a first 45 minutes dominated by Bremen’s dogged defending and pouring rain, Bayern broke through when centre-back Jerome Boateng chipped over the top for Lewandowski to score.

It was the Poland striker’s 31st league goal of the season, a career best, keeping him on course to be named the league’s top scorer for the fifth time.

Head coach Hansi Flick landed the Bundesliga title in his first season in charge having stepped in when Niko Kovac was sacked last November.

Even the coronavirus lockdown could not stop Bayern’s momentum, with the champions winning eight consecutive games in all competitions since the resumption of German football last month.

Flick, assistant coach when Germany won the 2014 World Cup, could land the treble as Bayern face Bayer Leverkusen in the German Cup final on July 4 and hold a 3-0 first-leg lead over Chelsea in the Champions League last 16.

“This is Bayern Munich, the goals are always high,” said Flick after club president Hainer Herbert had said the treble is the goal this season.

“We have now reached our first big goal, the cup is now the next goal, then the Champions League, but you can’t plan for that.”

The home defeat means Bremen, who are three points from guaranteed safety with two games left, badly need a result at fellow strugglers Mainz this Saturday or against Cologne at home on the final day of the season.

Having given Bayern the lead, Lewandowski went chasing a second and had the ball in the net in the 54th minute but was flagged offside.

Canada left-back Davies showed a lightning pair of heels by clocking 36.51km/h, which will be a Bundesliga record if the speed is confirmed, before his late dismissal.

Having been shown a first-half yellow card for a foul on Leonardo Bittencourt, Davies was booked again for blocking the run of Milos Veljkovic.

Bremen piled on the pressure in the final 10 minutes, with Boateng doing excellently to prevent a late cross from reaching Josh Sargent.

Germany goalkeeper Manuel Neuer pulled off a stunning finger-tip save in the 90th minute to deny Japan forward Yuya Osako, with Pizarro sliding in searching for a tap-in, as Bayern held on.