By AFP
Luis Neto bundled into his own net to hand Mexico a 54th-minute lead, but Pepe stabbed home a stoppage-time equaliser to force an extra 30 minutes at Spartak Stadium.
1 of 10 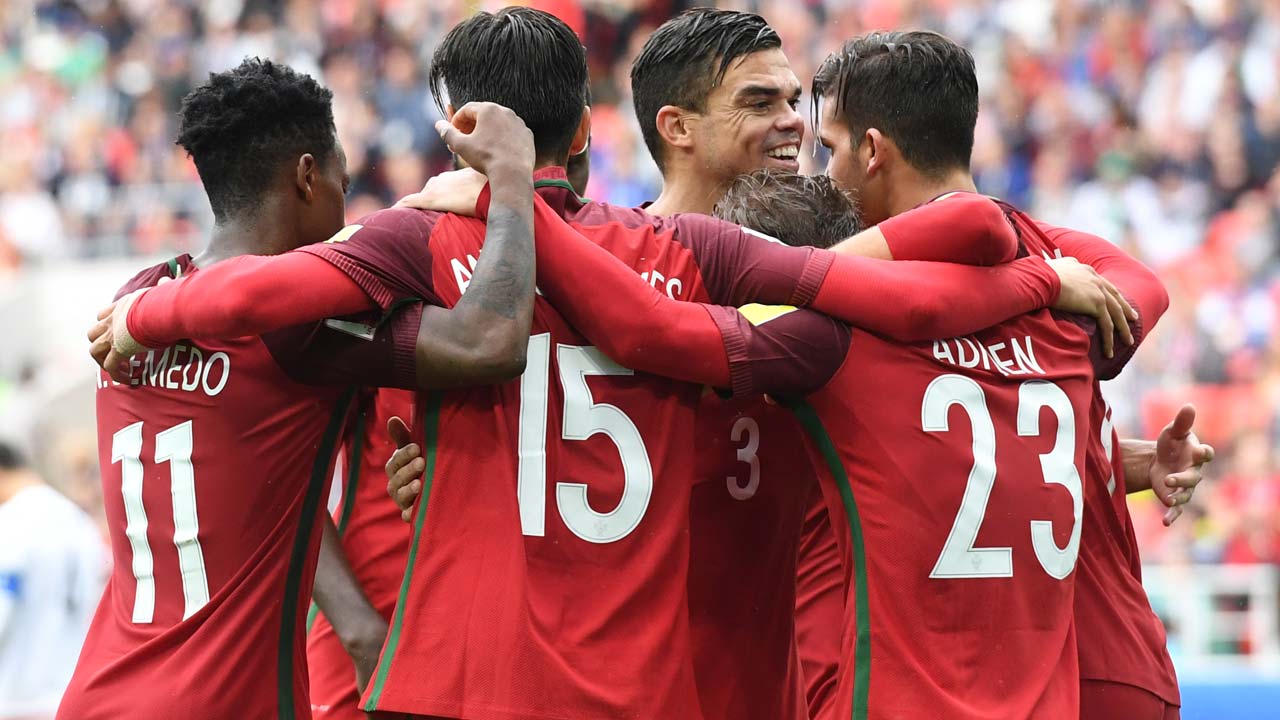 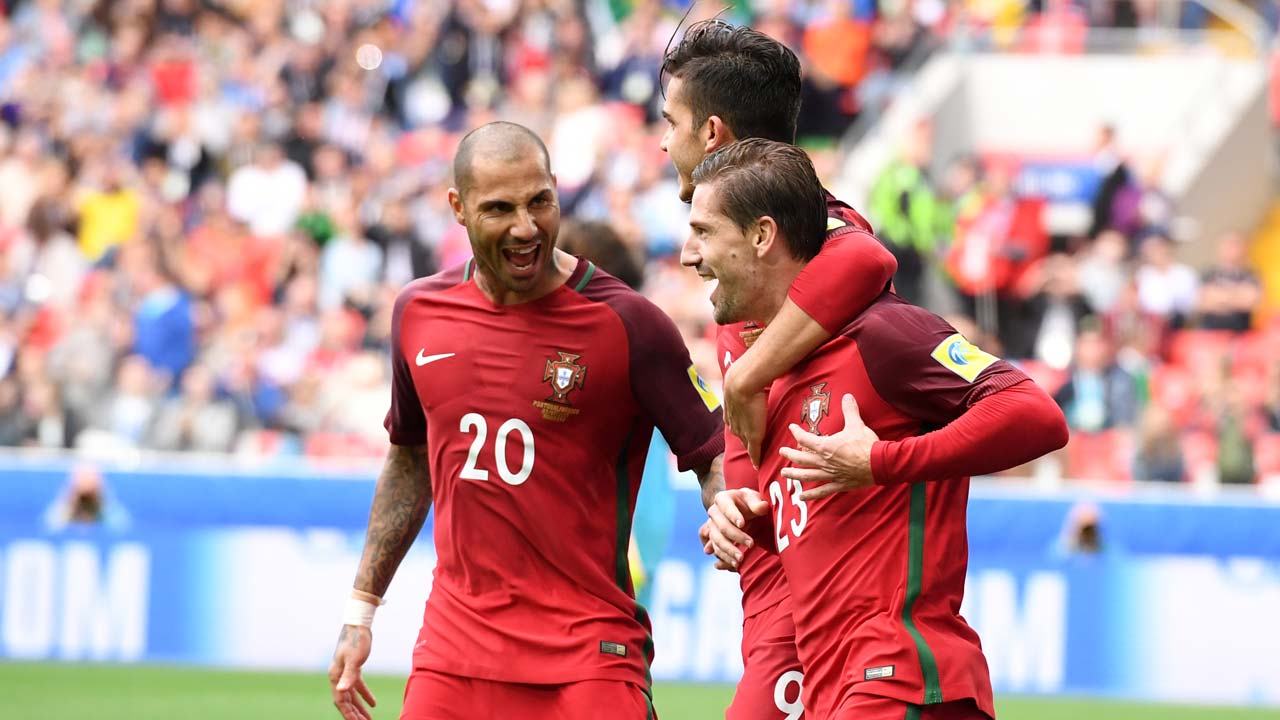 Adrien Silva scored an extra-time penalty as Portugal recovered from a goal down to beat Mexico 2-1 in Sunday’s third-place play-off at the Confederations Cup in Moscow.

Luis Neto bundled into his own net to hand Mexico a 54th-minute lead, but Pepe stabbed home a stoppage-time equaliser to force an extra 30 minutes at Spartak Stadium.

Silva then struck his first international goal after a handball inside the box on 104 minutes, while both sides finished with 10 men as Nelson Semedo was dismissed for Portugal before Raul Jimenez saw red for Mexico.

European champions Portugal were without captain Cristiano Ronaldo after the Real Madrid star was released from the squad to return home to meet his newborn twins.

Portugal and Mexico drew 2-2 in the opening game of the group stage, when Hector Moreno salvaged a last-gasp point for the Gold Cup winners, but were left fighting for a consolation prize in the Russian capital.

Portugal should have gone in front in the drizzling rain on 17 minutes when Andre Silva was upended by 38-year-old Rafael Marquez, with the video assistant referee stepping in to award the spot-kick.

But Mexico goalkeeper Guillermo Ochoa flung himself superbly to his right to tip Andre Silva’s low spot-kick round the post.

Rui Patricio produced a sharp stop to deny Javier Hernandez, Mexico’s all-time leading scorer, from close range on the half hour, but the Portugal keeper was beaten shortly after the break.

Portugal went in pursuit of an equaliser and Gelson Martins — replacing Ronaldo in attack — was denied by an excellent save from Ochoa with just over an hour played.

But Ochoa was beaten in the first minute of injury time as Pepe lunged to get on the end of Ricardo Quaresma’s curling right-wing cross to force extra time.

Silva, on as a substitute, then grabbed the winner just before the end of the first period of extra time, burying a penalty after Miguel Layun handled in the box.

Semedo was then sent off on 106 minutes after picking up a second yellow card, but Mexico’s numerical advantage was swiftly wiped out when Jimenez received his marching orders.

Guardian Life
Iwa Ji- The New Yam Festival In Igbo Land
40 mins ago
Yams are an excellent source of fibre, high in potassium and manganese, which are important for supporting bone health, growth, metabolism, and heart function. Yam tubers also provide a decent amount of other micronutrients such as copper and vitamin C. Among the Igbo tribe of Nigeria, West Africa, it is obvious that the most cherished…
Style
The Power Of Shapewear
50 mins ago
Shapewear is the canvas and the clothes are the art - Sara Blakely Shapewear is an important piece of lingerie every woman should have. Its main purpose is to compress flabby areas of the body in order to achieve a nice feminine silhouette. Shapewear has been around for centuries and can be traced to…
Nigeria
Drug abuse, trafficking in Nigeria under control – Marwa
51 mins ago
The problem of drug abuse and trafficking in Nigeria is “on its way to being under control”, Chairman/Chief Executive Officer, National Drug Law Enforcement Agency (NDLEA), retired Brig.-Gen. Buba Marwa, has said. Marwa told the Correspondent of the News Agency of Nigeria (NAN) in New York that with the support from the Federal Government, foreign…
Focus
NNPC Weekly Review: NNPC mulls rebuilding roads under tax credit scheme
55 mins ago
The Nigerian National Petroleum Corporation (NNPC) started its week with an engagement with critical stakeholders in a bid to find lasting solutions to the road network challenges and other lingering issues. Group Managing Director of the NNPC, Malam Mele Kyari while engaging the stakeholders said the move was a follow-up to the corporation’s efforts in…
Guardian Life
How To Make Angel Food Cake
1 hour ago
Angel food cake is a low-fat cake made from flour, egg white, and sugar. What it lacks in butter, it makes up with its light and airy texture. Ingredients • Flour • Sugar • Egg white • Salt • Vanilla extract • Cream of tartar Method 1. Sift half of your sugar, flour, and salt.…

Sport
Spurs spoil Newcastle's Saudi party
1 day ago
Newcastle's new dawn under the ownership of the Saudi sovereign wealth fund got off to a disappointing start as Tottenham silenced St James' Park with a 3-2 win on Sunday.

Sport
Enyimba not celebrating yet despite away win, says Finidi
5 hours ago
Despite’s his club’s 1-0 away win in their first game of the CAF Confederation Cup second qualifying round, Enyimba of Aba’s Chief Coach, Finidi George, says the Peoples Elephant will not rest on their oars until the job is done.

Sport
NBBF inaugurates Glover-led 2021 Electoral/Appeals Committee
6 hours ago
The Nigerian Basketball Federation (NBBF) at the weekend in Abuja inaugurated the federation’s Electoral and Appeals Committees to mark the official commencement of their electoral duties.

Sport
Perfect Napoli reclaim top spot after Osimhen's 'most important' goal
5 hours ago
Napoli returned to the top of Serie A on Sunday after Nigerian international Victor Osimhen scored the only goal in a hard-fought 1-0 win against Torino.